iTunes 12.2.1 — While subscribers to Apple’s iTunes Match service may welcome the release of iTunes 12.2.1, there are reasons to be wary. The release notes promise to fix a bug that incorrectly converted some songs from Matched to Apple Music — complete with a layer of DRM — as well as provide a path for correcting a library problem that affected former iTunes Match subscribers. However, Kirk McElhearn warns that this update may not live up to its promise, as he is still experiencing iTunes Match tracks showing as
Apple Music tracks (with DRM) as well as incorrect artwork. An Apple support document notes that you may need to “remove and download again any songs that were incorrectly downloaded as Apple Music.” The iTunes 12.2.1 release also includes unspecified bug fixes and improvements for the Beats 1 streaming radio station. (Free, 222 MB via direct download or via Software Update, 10.7.5+)

LaunchBar 6.4.1 — Objective Development has released LaunchBar 6.4.1, a maintenance update for the keyboard-based launcher. In addition to minor (unspecified) improvements to the Action Editor, the update fixes a crash that occurred when opening some files or folders in iCloud Drive, resolves a problem that caused the actions indexing rule to continuously re-index due to a perceived change in the OS X Action Extensions (which then resulted in high CPU usage), ensures that emojis with a long names are found after typing only a short abbreviation, and extends the list of currency symbols that are ignored in calculator
expressions. ($29 new with a 20 percent discount for TidBITS members, free update, 13.2 MB, release notes, 10.9+)

Skype 7.9 — Microsoft has released Skype 7.9 with the addition of rich visual previews for links in Instant Messaging, which will show up automatically if an image related to the link is found (though not every Web page with an image will receive a preview). The Internet telephony and messaging app also resolves an issue that caused links to disappear occasionally in chat, fixes a bug that prevented GIFs from loading properly, and prevents a crash that occurred on Macs with a Force Touch trackpad. (Free, 39.9 MB, release notes, 10.9+) 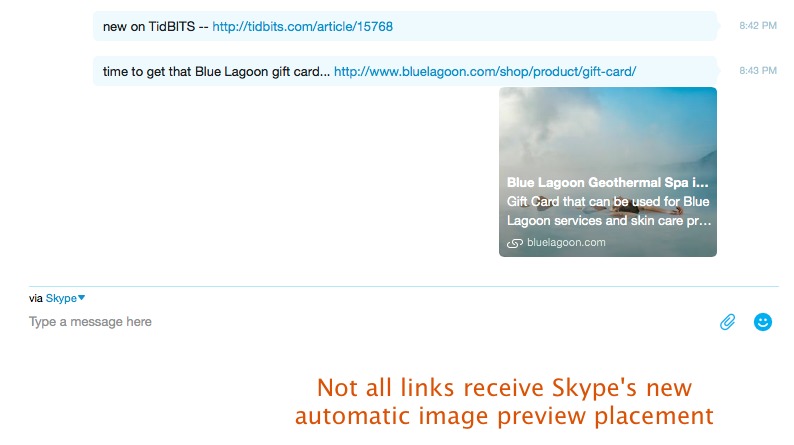 Read/post comments about PDFpen and PDFpenPro 7.2.