For the first time in almost three years, Apple has refreshed its iPod lineup, releasing a new iPod touch with improved specs and changing the colors of the otherwise unchanged iPod nano and iPod shuffle. Despite Apple’s headline proclaiming “5 stunning colors,” all three actually come in six colors: blue, pink, silver, gold, space gray, and (PRODUCT)RED, with the proceeds from the last one going toward fighting AIDS in Africa. 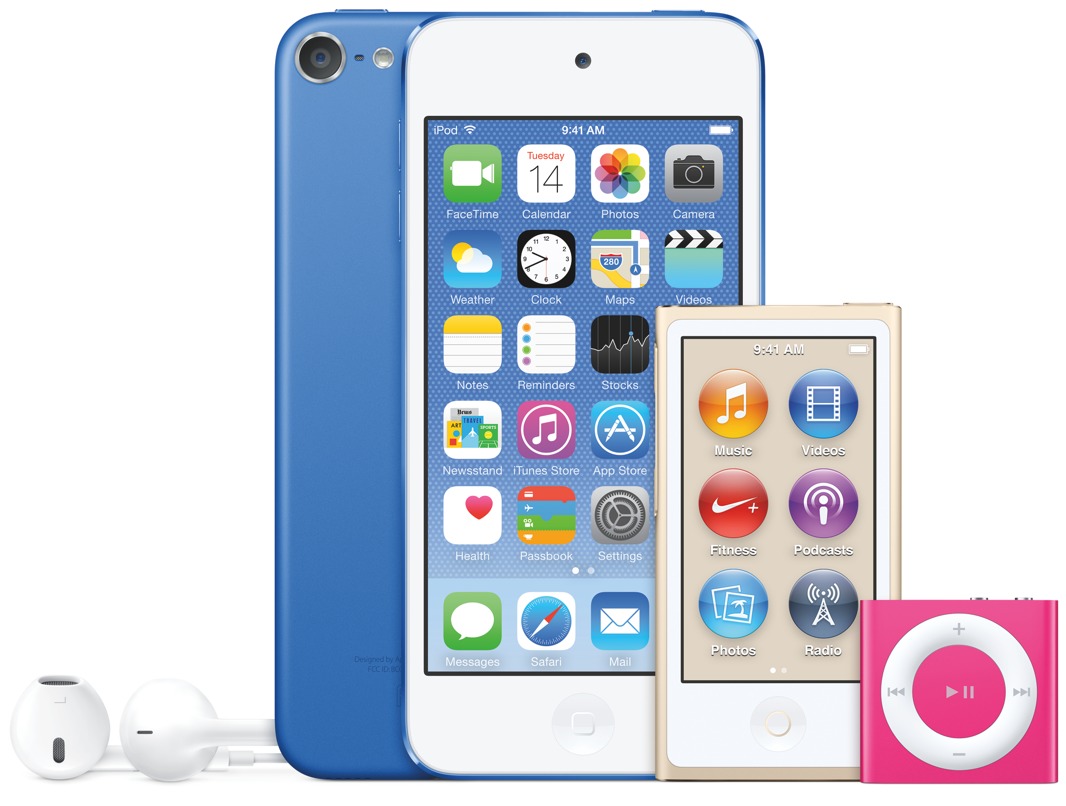 The new sixth-generation iPod touch retains the same form factor and 4-inch Retina display as the previous generation, but now boasts the A8 processor and M8 motion coprocessor used in the iPhone 6. The updated iPod touch also offers a new 8-megapixel iSight camera capable of capturing 1080p and slow-mo video, and an improved FaceTime HD front-facing camera that can take 1.2 megapixel photos and 720p video. Wi-Fi connectivity is also improved, with support for the 802.11ac standard. It appears that
Apple has dropped the peg that enabled users to attach a wrist strap. Battery life remains unchanged at up to 40 hours of music playback and 8 hours of video playback.

The new iPod touch supports Apple Music, and according to Apple’s iPod comparison page, it’s the only iPod to do so; iTunes will not let you sync Apple Music songs to the other iPods. The iPod touch starts at $199 for 16 GB of storage, with 32 GB available for $249, 64 GB for $299, and for the first time, 128 GB for $399 (the 128 GB model is available only directly from Apple). The 128 GB model should mollify some of the people perturbed by last year’s loss of the 160 GB iPod classic model (see “Eulogy for the iPod classic,” 11 September
2014).

Other than the new colors, the updated iPod nano is identical to the old model, with only a 16 GB model available for $149. It features a 2.5-inch multi-touch display, Bluetooth 4.0 connectivity, an FM radio with 15-minute Live Pause, and Nike+ integration. It offers up to 30 hours of music playback or 3.5 hours of video playback.

The updated iPod shuffle is also identical to its old model, apart from the new colors. It stores only 2 GB worth of music, but costs just $49. It offers VoiceOver support for track identification and navigation, and up to 15 hours of music playback.

It’s particularly nice to see Apple paying some attention to the iPod touch after all this time; it had lagged significantly behind the iPhone and its yearly refreshes. For some audiences, notably younger children, an iPhone is inappropriate, but it was difficult for parents to choose an iPod touch when its processing power had fallen so far behind the iPhone and iPad for games. We aren’t at all surprised to see that the iPod touch retains its smaller form factor, though, since children have smaller hands (and often sharper eyes!) than adults, and reducing the manufacturing changes undoubtedly enables Apple to keep margins high. Given that Apple’s Other Products category, which includes the iPods, Apple TV, Beats Electronics, and
accessories, brought in $1.7 billion in revenue in the last fiscal quarter (see “Apple Makes Even More Money in Q2 2015,” 27 April 2015 — that number is down from $2.7 billion the previous quarter), it’s worth keeping these iPods going, but not worth putting much effort into updating them.