My Comcast Business Internet connection has recently become increasingly flaky. I had one outage on 18 June 2015, which prompted Comcast to send an apology note. About a week later, I received an automated phone call telling me that there was a planned maintenance outage coming in the wee hours of the morning. But then on 12 July 2015, I had another outage that lasted from about 11 AM to 3 PM. For most people, these outages are merely inconvenient, but when you work remotely, they throw a wrench into your workday. 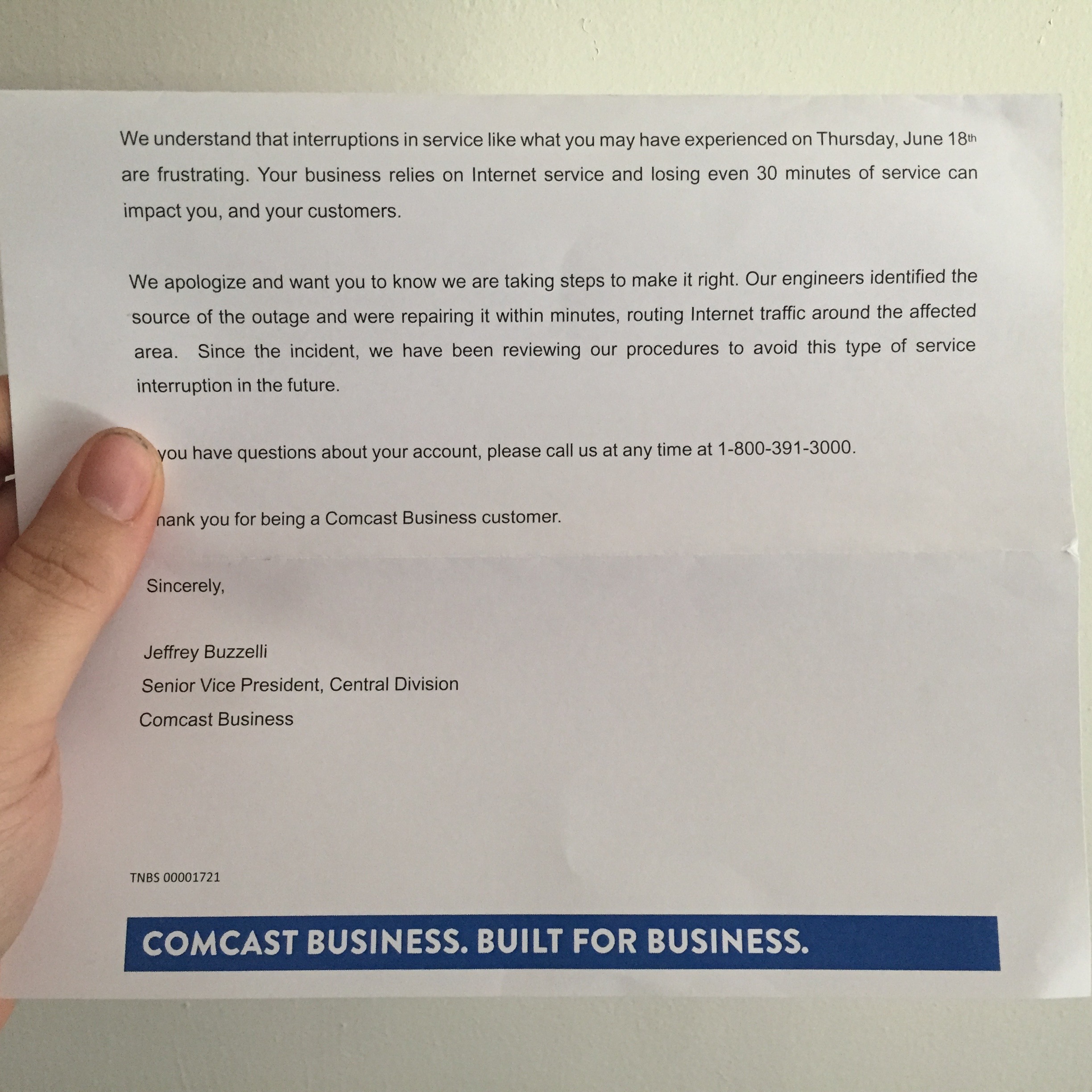 I’m not alone in my frustration. The downdetector.com Comcast outage map looks like a nuclear war broke out over the United States, with outages spanning from Boston down to Virginia, with hotspots in and around Tennessee, stretching to the Florida panhandle, and then skipping across the country into Colorado, large parts of California, and the Pacific Northwest. 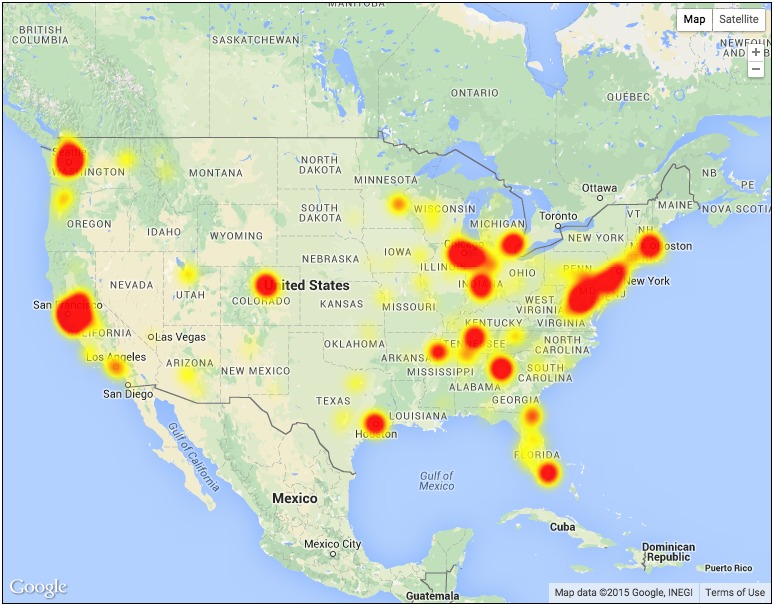 I’ve actually been fairly lucky — many of the people I follow on Twitter have had much worse outages. So what is going on? Unfortunately, the answer may not be simple.

Scanning the headlines, I discovered a Jersey Shore outage in June that Comcast blamed on software problems. Another June outage was caused by DNS failures. Another West Coast outage in May was pinned on a boring rig accidentally cutting fiber lines. An earlier
May outage affected Washington State, though a cause was not disclosed.

I spoke to Comcast’s Dave McGuire about the outages. He insisted that the incidents were isolated and coincidental. “We take reliability extremely seriously. While all networks experience unforeseen issues, we have worked hard and invested to build a network that is robust, redundant, and self healing. When we do experience issues, we work quickly not just to bring service back online, but also to understand the causes and make sure they don’t happen again,” he said.

If you do have an outage, here’s what you can do to diagnose it and get back online as soon as possible.

Troubleshooting Your Connection — You’re working away, and all of a sudden, a Web site won’t load. Before you call your ISP, it’s important to determine the source of the malfunction. Here are the common causes:

First, be sure that you have a solid Wi-Fi signal or a wired connection and try visiting Google in a Web browser. If that doesn’t work, try Yahoo or Apple or Amazon — it’s nearly inconceivable that these large sites would be down at all, much less at the same time. If the large sites load, the problem is likely the particular server you were trying to contact being down — it happens, and the only solution is to wait until it returns.

On the other hand, if you have trouble accessing the big sites, try them again on another Mac, iPhone, or iPad. If pages load on the second device, reboot the first device, since it’s the problem.

If Web pages won’t load on your secondary device, you have to check the next link in the chain: your cable/DSL modem and your router (which are sometimes the same device). The easy way to test them is to unplug both, wait for 10–15 seconds, and then plug in first the modem and then the router. Give everything a few minutes to come back online, and then try loading a Web page again.

If you still can’t make a connection, the problem is almost certainly an issue at the ISP’s end. But if you don’t mind getting a bit technical, there’s one more workaround you can try.

Sometimes an ISP will appear to be offline, when the problem is actually limited to its DNS server. DNS, or domain name service, translates human-readable Internet addresses like tidbits.com into computer-readable IP addresses like 173.255.250.214. If a DNS server is down, it may seem as though your entire Internet connection is down. To see if that’s the case, try visiting http://173.194.115.78/ in your Web browser. That’s currently a direct IP address for Google, and if it loads, you know the problem is with DNS (note that the IP address may change in the future).

The solution in that case is to change your preferred DNS servers on your router or computer — the former will affect the entire network while the latter will be localized to just your computer. Google Public DNS is one alternative, as is OpenDNS (soon to be acquired by Cisco). However, if you change your DNS server settings, be aware that it could have a negative impact on video streaming, as many ISPs offload high-bandwidth content to a content delivery network (CDN), and if you’re not using the ISP’s DNS servers, you may not get a nearby streaming server.

To change DNS servers on the Mac, open Network pane of System Preferences, and from the sidebar, choose your preferred method of connecting to the Internet: Ethernet or Wi-Fi. Click the Advanced button, and select the DNS tab. In the list of DNS Servers, there should already be one or more IP addresses, with one mapping to your router, which usually acts as a DNS gateway. Click plus (+), and you can add your preferred DNS servers (the previously entered ones may vanish). Feel free to add several servers, in order of preference. If the top-most DNS server fails to respond, your Mac will continue down the line until it finds one that works. You can also drag items in the list to rearrange the order. 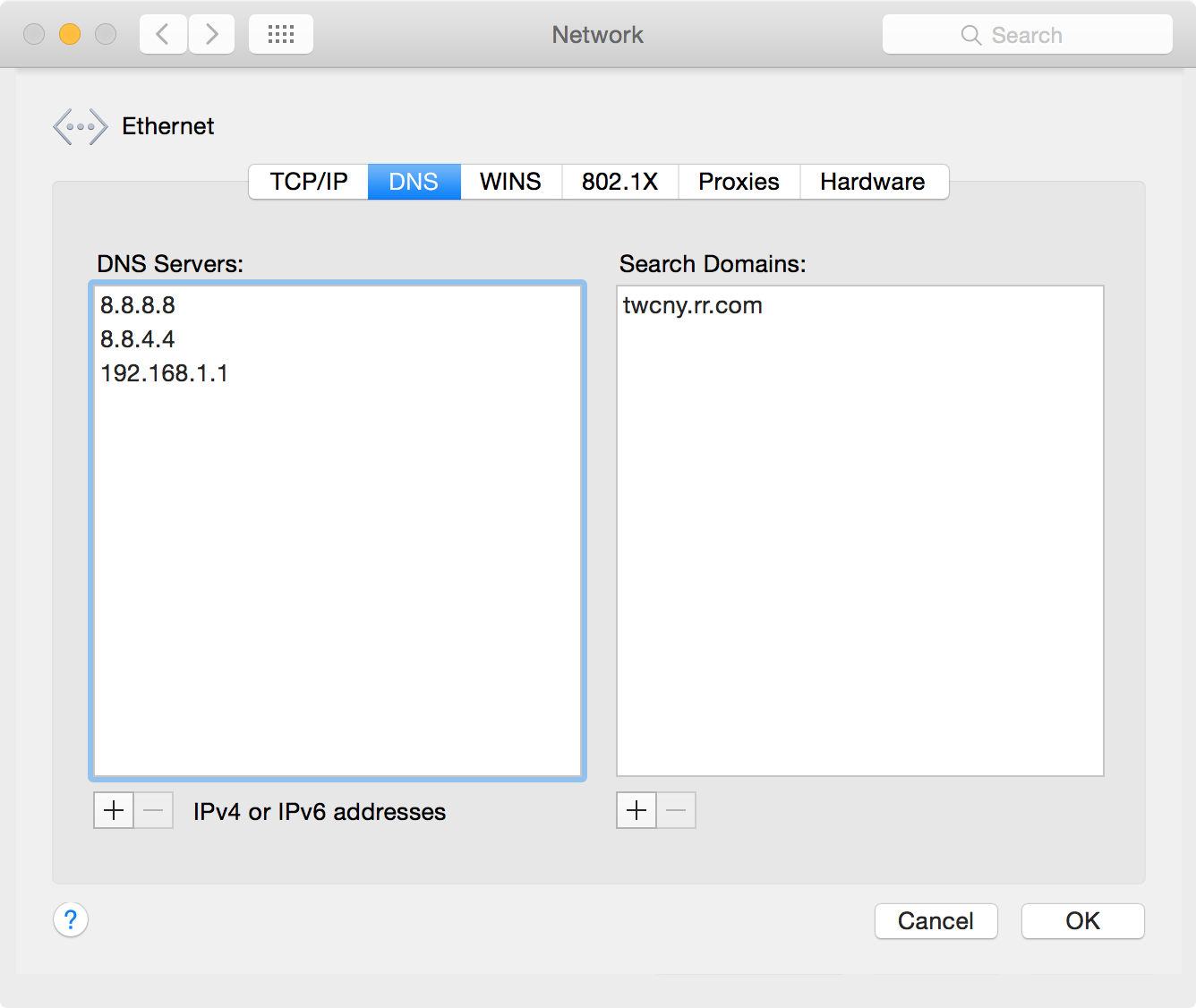 Later on, if you find that having alternative DNS servers is causing problems, you can return to that screen, select the DNS servers and click minus (–) to delete them. If you delete all of them, your Mac reverts to its auto-detected defaults.

Here’s a bonus tip: the free namebench utility will compare your current DNS providers against others, and let you know which ones are the fastest (be aware that namebench takes quite a while to run). Faster DNS can mean faster Web page loading, but remember that not using your ISP’s DNS server could hamper streaming video performance, due to the aforementioned CDNs.

Once you’ve ruled out DNS failure, the only remaining logical conclusion is that your ISP is suffering some sort of outage. If you have cable Internet, it may be worth checking to see if you still have TV service, though the two aren’t necessarily related. A cable cut would affect both, but a dead router high up in the ISP’s datacenter might affect only Internet service.

For Comcast customers, the good news is that if you’re experiencing a known network outage, a quick call to 1-800-COMCAST (residential) or 1-800-391-3000 (business) will provide an automated message letting you know when service should be restored. Otherwise, you may wish to let technical support know about the outage. Another outlet, if you have a backup Internet connection (via your iPhone’s cellular data connection, for instance), is to reach out to @comcastcares on Twitter. I’ve found Comcast’s Twitter team to be more responsive than its phone support crew. And if you do have a mobile Internet connection and your data plan supports it, you can tether your Mac to your iPhone and
keep working; Apple’s article, “Use Continuity to connect your iPhone, iPad, iPod touch, and Mac” explains how. You’ll probably want to shut down data-intensive services like Dropbox, CrashPlan, and iCloud Photo Library while tethered — check out Trip Mode if this is a common need.

Regardless of your ISP, be sure to have a tech support contact number available in an offline location. You don’t want to be stuck needing to search the Internet for the number when you have no connection!

Comments About Dealing with Recent and Future Comcast Outages