With Instacast gone, (see “Farewell Instacast,” 16 June 2015), the only other dedicated Mac-native podcast player is Downcast. Well, there’s iTunes, but it’s a pain to use for podcasts because it lacks 30-second skip buttons. And, well, it’s iTunes, which provokes vitriol whenever it’s mentioned.

As Julio Ojeda-Zapata pointed out in “Mac Podcast Client Showdown: Native Clients vs. Web Apps” (5 January 2015), many of the best podcast players are now Web-based. But one problem with Web-based media players is that you can’t control them with the media keys on your Mac’s keyboard. Or can you? (And if you’re not sure what I’m talking about here, the media keys are usually F7 through F12, with functions for play/pause, rewind, fast-forward, mute, and volume up/down — look at the keycap labels for specific key assignments.)

Enter the oddly named but free BeardedSpice menu bar utility. From its menu, BeardedSpice lets you choose which media players your media keys control, including Web-based players in Safari and Google Chrome. This not only solves the problem of not being able to control Web-based media players, but also lets you specify which native apps get to use the media keys so you don’t have conflicts. I can set whether my keyboard media keys are controlling iTunes, Overcast.fm, Spotify, or YouTube. (For some reason, BeardedSpice always lists “No Track” for iTunes, though that’s not a particularly worrisome bug.) 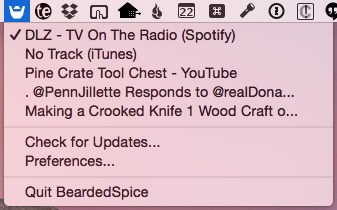 BeardedSpice can’t control every Web-based media player, but it’s likely compatible with your favorites, including Amazon Music, Google Music, Last.fm, Overcast.fm, Pandora, Pocket Casts, Rdio, Slacker, Songza, Tidal, Vimeo, and YouTube, among others. And if you run across a player that doesn’t work, you can always ask for it to be supported.

Regardless, BeardedSpice is a free, simple way to regain keyboard control of your various media players. Give it a try!