A little over two years ago, Peter Lewis of Stairways Software released Keyboard Maestro 6, and I sang the praises of macro software in general before describing that version’s new features (see “Keyboard Maestro 6 Automates Web Pages, Adds Macro Syncing,” 21 May 2013). Although the specific macros I rely on today are a bit different, everything else I wrote there remains completely true, and if you’ve never quite understood the utility of macros or Keyboard Maestro in particular for automating repetitive tasks on your Mac, go read that article. I’ll wait.

Every macro has two basic parts — a trigger and an action. Most people think of triggers as keyboard shortcuts, but Keyboard Maestro boasts a large and growing set of triggers that can initiate macros. New triggers in version 7.0 include a change in the focused window, a folder’s contents changing, the clipboard changing, and the Mac going to sleep. In addition, standard Hot Key (and Device Key) triggers now support double-tap, triple-tap, and so on. Of course, you can still use triggers that execute at login, when a volume is mounted or unmounted, at a specific time, when the Mac wakes, when you join a particular wireless network, and so on. 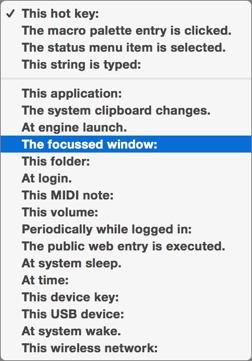 On the action side of the equation, Keyboard Maestro already had a vast number of actions to control nearly anything on your Mac, but 7.0 still manages to add a number of new and enhanced actions. The most interesting include Type Modifier Key, Open 1Password Bookmark, Simulate Hardware Key, Set Keyboard Layout, Execute Swift Script, and Execute JavaScript for Automation. Notably, a new Switch/Case action lets you give a macro
more smarts because it can determine if the clipboard, a variable, or some text contains a particular string or an image, and then execute sub-actions if so.

Note two things about the previous paragraph. First, a new gear menu in every action provides access to a variety of contextual operations you might want to perform on the action, such as trying it, disabling it, renaming it, and adding a color or a note (documentation within macros, yay!). There are even a pair of copy commands for easy sharing of the action; the screenshot of the Switch/Case action above was made by Copy As Image. The second thing to note is the link to the Switch/Case page on the Keyboard Maestro documentation wiki;
that’s accessible by choosing Help from the gear menu. This contextual help sprinkled throughout the app makes it much easier to construct complex macros using previously unfamiliar actions.

With so many actions to choose from, scrolling through the list in Keyboard Maestro Editor has become tedious. You’ve long been able to search for an action within the list, but even easier is a new keyboard shortcut — Command-Control-A — that brings up an Add Action bar. Type part of the name to see a list of possibilities, and insert the desired action with a double-click.

Other changes in Keyboard Maestro Editor include: 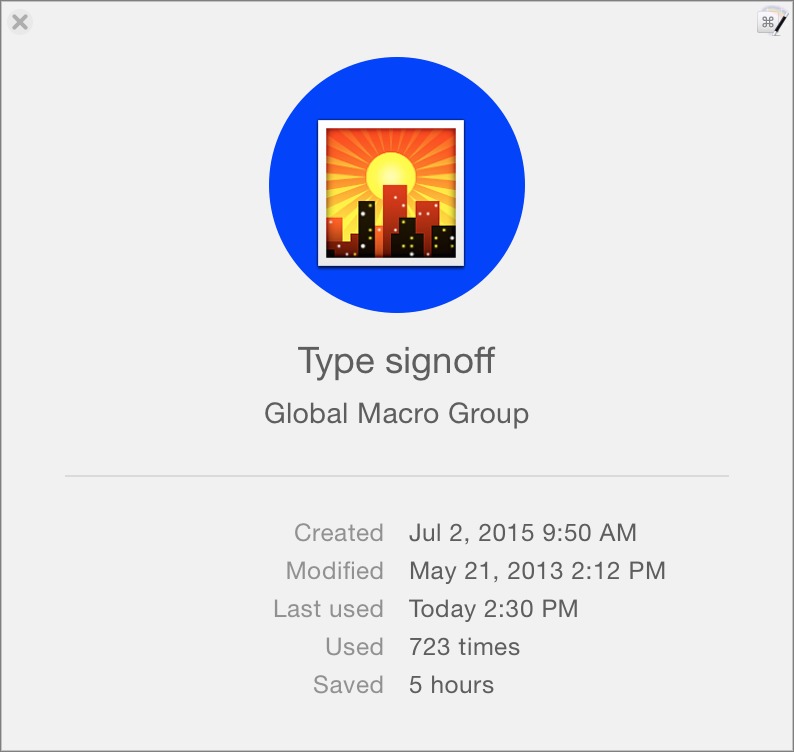 Finally, if you make heavy use of palettes to display your macros, themed palettes may be welcome, since they enable you to customize just how your palettes look. Open Keyboard Maestro’s Preferences window, click Palettes, and then click one of the palette types to bring up the Palette Editor.

There are numerous other changes — too many to detail here — that make Keyboard Maestro 7 a welcome revision. Happily, unlike many Apple upgrades, most of Keyboard Maestro remains familiar, with the new features simply building on what was already there. That’s because one of Peter’s major goals is to enhance the experience for current users in such a way as to warrant the upgrade cost, rather than just moving the
interface deck chairs around in the service of fashion. That also means that Joe Kissell’s “Take Control of Automating Your Mac” book remains generally accurate in its explanation of how to use Keyboard Maestro.

Keyboard Maestro 7.0 costs $36 new, with upgrades priced at $18 (for those who purchased version 6) or $25 (for people who last purchased an earlier version); a free trial is available. It requires OS X 10.10.3 Yosemite or later; those with earlier versions of OS X can still get an appropriate older version of Keyboard Maestro. And yes, it’s compatible with the public beta of 10.11 El Capitan as well. TidBITS members, and anyone who buys “Take Control of
Automating Your Mac” can save 20 percent on new copies of Keyboard Maestro, dropping the price to $28.80.