For the last year or so, one of the prime spots on my iPhone’s home screen has been occupied by Dark Sky, a weather app that provides some smarts beyond the usual current conditions and 7-day forecasts. Most weather apps rely on the same set of data from the National Weather Service or other weather providers and differentiate themselves largely on interface. For years, my favorite of these was WeatherBug, which I reviewed back in 2010 in “WeatherBug Elite 1.0” (4 March 2010). And in fact, WeatherBug retains a spot on my iPhone, right next to Dark Sky, for reasons I’ll explain shortly.

So why does Dark Sky stand out, and why it has become one of my most-used apps? On its initial screen, under the current conditions, it provides a forecast for the next hour that is usually on target. Not everyone will care about this, such as those in California or other places in the world where the weather doesn’t change much. Nor will people who spend little time outside. But here in upstate New York, and speaking as someone who exercises outside most days, I care deeply about the weather. And more to the point, I care deeply what the weather is going to do soon, right where I am. 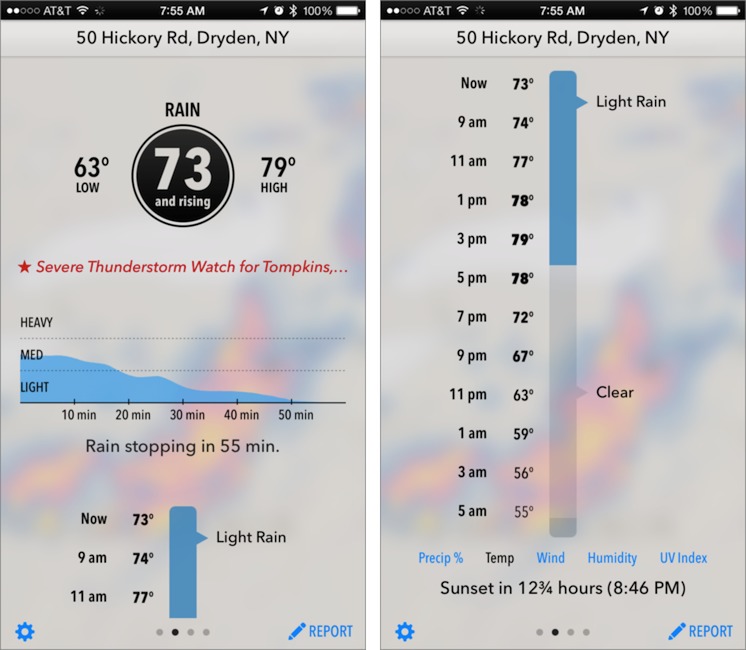 Perhaps I want to go for a run, and it’s raining. I don’t mind getting wet, but I don’t like to start that way, so if my check of Dark Sky’s next-hour forecast tells me the rain will be passing in 10 minutes, I’ll wait. Or if I’m heading out for a long ElliptiGO ride on a nice summer day, I’ll check to make sure thunderstorms aren’t likely to appear seemingly out of nowhere within the hour (this happens!).

Similarly useful are Dark Sky’s precipitation alerts, which can be configured to alert you to rain that’s going to dampen your specific location. While volunteering at an aid station during the Cayuga Trails 50 mile ultramarathon, I was mocked by my friends when I reported Dark Sky’s notification that light rain would start in 8 minutes; they changed their tune after the drops started hitting our tent exactly on time. Later that day, when Tonya and I were browsing the craft booths at the Ithaca Festival, several vendors downloaded Dark Sky on the spot after seeing that it could tell them when to drop the sides of their tents. And on more than one occasion, we’ve packed up a picnic early due to a Dark Sky notification that hard
rain would be starting in 15 minutes.

All this works because Dark Sky’s near-future forecasting has proven itself quite accurate. Exactly how Dark Sky achieves this accuracy, I don’t know, though I suspect it does what I previously did by feel in WeatherBug, where I used the animation of precipitation blobs in a radar map to estimate the likely destination and arrival time of the rain. More generally, Dark Sky relies on Forecast.io, a weather service from the same developers that’s also used by many other weather apps. 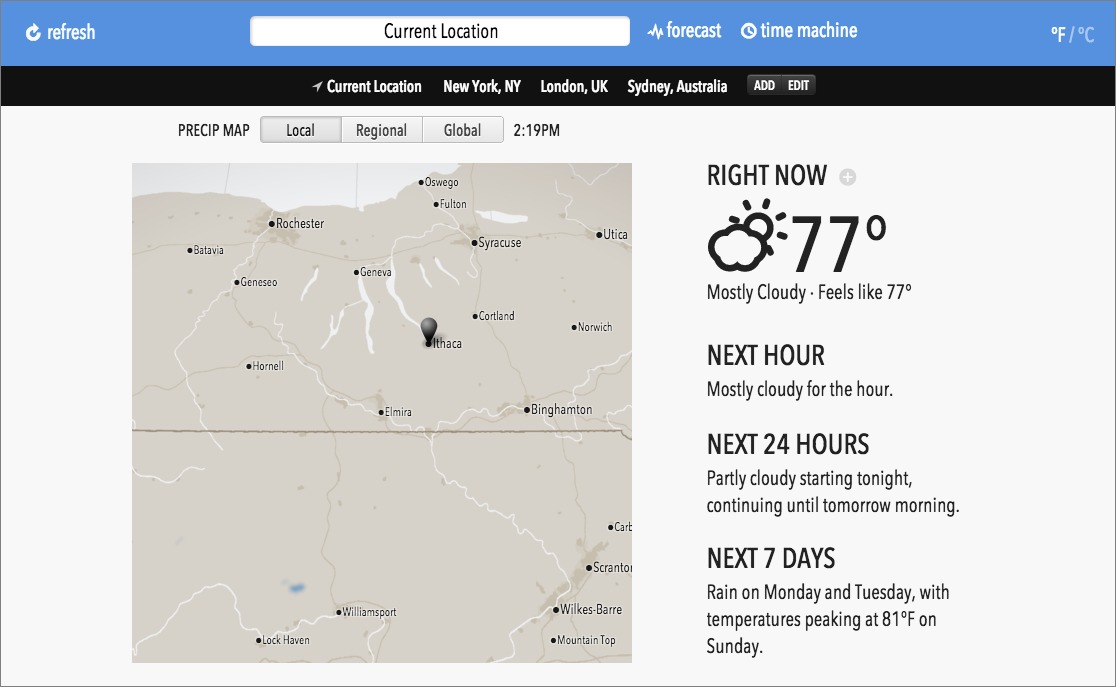 You can help out, too. In the recently released Dark Sky 5, if its conditions don’t agree with what’s actually going on outside, you can report your local weather back to Forecast.io to help improve its forecasts. Plus, if you’re using an iPhone 6 or iPad Air 2, both of which feature a pressure sensor, a switch in Dark Sky’s settings lets the app periodically send pressure data back to Forecast.io to boost forecast accuracy.

While Dark Sky’s next-hour forecasts are unusual among weather apps, its 7-day forecast screen (swipe left) is less innovative, at least on its face. For each day, an icon indicates the general weather for the day, and a temperature bar shows the predicted high and low. If rain is predicted, a percentage appears under the icon. The problem with this display is that you can’t tell from it if that 100 percent chance of rain for the day means it will rain all day, or that it’s guaranteed to rain sporadically throughout the day.

However, tapping any row in the list expands that day’s forecast to an hourly view, showing when Dark Sky thinks it will and will not rain, with tappable options to show the predicted likelihood of precipitation, temperature, wind speed and direction, humidity, and UV index. Personally, I care only about precipitation and temperature, but I could easily see sailors caring about winds, and those concerned about sun exposure checking out the UV index. Sunrise and sunset times appear at the bottom. This expanded hourly view is easily closed with another tap, or you can expand other days and see them all in one long scrollable list. It’s an inspired interface, and nicely less modal than many other apps. 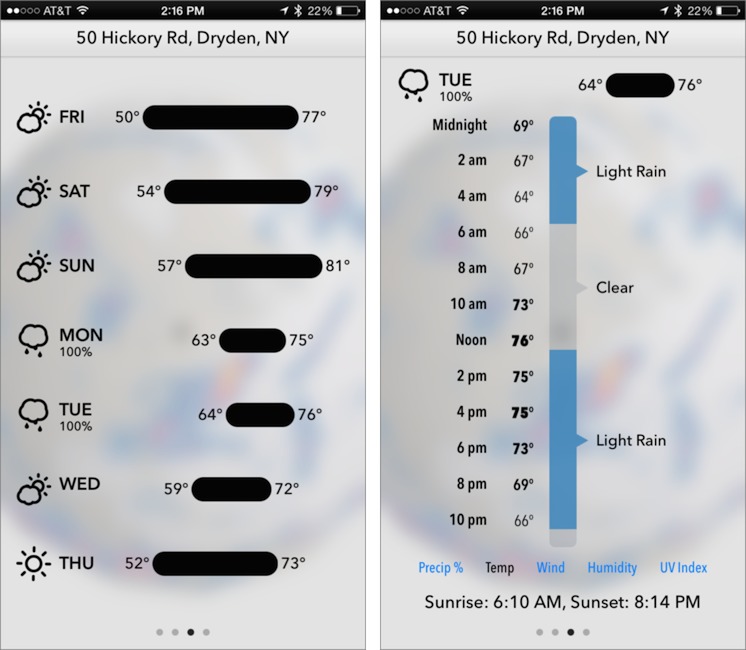 How accurate is Dark Sky’s 7-day forecast? Honestly, although its broad strokes seem generally on target, it’s hard to evaluate just how accurate it is (I’d love to see a weather app that reported back on its accuracy). It often doesn’t quite agree with WeatherBug (which relies on its own independent weather service), but neither is shockingly good. Yes, it will probably rain next Tuesday, but will there really be an early morning rain followed by another band coming through in the mid afternoon? I
wouldn’t plan on it, since no forecast can yet predict exactly how fast a weather front is moving more than a few days in advance, and in this part of the world, we have what Tonya and I call “pop-up thunderstorms” — precipitation blobs on the radar that appear out of nowhere rather than marching predictably across the country, west to east.

As you can tell, I really like radar maps. I credit that to growing up on a farm, where we needed to know when we’d have 2–3 days of nice weather to cut and dry hay for baling. My parents watched a morning TV showed called “A.M. Weather” every day in the summer (happily followed by reruns of “The Rocky & Bullwinkle Show”), and we listened to NOAA Weather Radio’s constantly updated reports on a special weather radio throughout the day. We’d start with that morning image in our heads and then mentally update it based on the radio reports. So having an app show what we were imagining is nearly indistinguishable from
magic.

But that’s the main place where Dark Sky falls down — its radar map (swipe right) is weak, at least in comparison to WeatherBug. Yes, it shows a pin at the current location, and you can pinch to zoom, and there’s a triangular play button to animate the map’s contents. All just like WeatherBug. But Dark Sky tries to get fancy with its map, eschewing a flat map for a spherical representation of the globe, and showing the entire planet at first. It’s pretty, but annoying, since you likely don’t care about the weather anywhere else in the world, and having to zoom in on your current location each usage is annoying. Plus, the globe simulation has inertia, so it continues to move after you stop scrolling. The map itself is
topographical, showing hills and valleys, along with bodies of water and major roads, but it doesn’t label the roads, or even towns and cities, making it harder to orient oneself. Perhaps because it’s trying to do so much graphically, it’s often slow to render as you zoom and pan. Sadly, the recent Dark Sky 5 release didn’t improve the map at all, even as the developers tweaked and polished nearly every other aspect of the interface.

The main thing Dark Sky’s map gets right is that you aren’t limited to the automatic animation. Instead, you can also manually scrub through the past 3 hours of radar activity, and even 1 hour of estimated future activity. That makes it all the easier to see where a thunderstorm is heading, and if the map was more usable in general, I’d rely on it regularly.

Along with the longstanding precipitation alerts, Dark Sky 5 introduces a daily summary alert that gives you a forecast for the day, and custom alerts that can notify you at a specific time if temperature, precipitation probability, snowfall, wind speed, UV index, or humidity will hit certain levels. Then there are severe weather alerts (we’ve had several flash flood alerts this summer), and to ensure that rainfall alerts don’t wake you up, there’s even an in-app Do Not Disturb option that can have different times than the overall iOS setting. 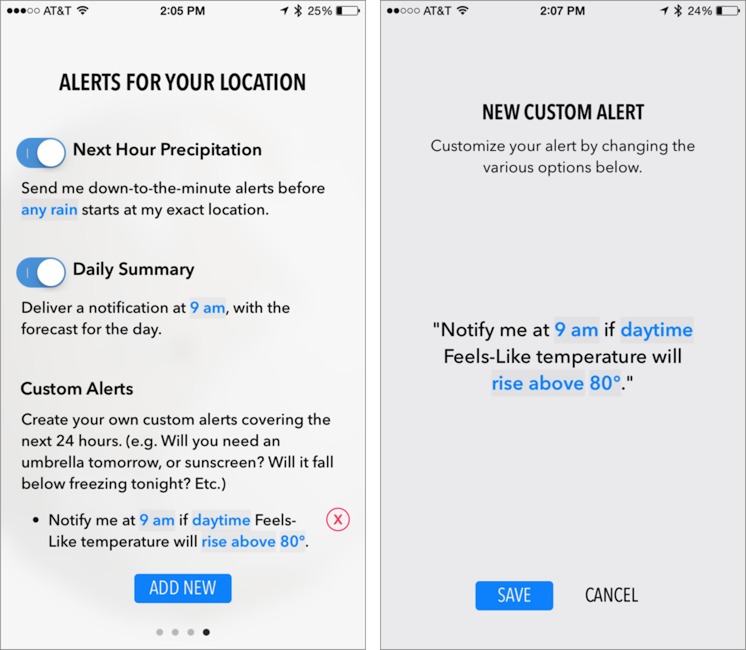 A recent addition to Dark Sky is an Apple Watch app, complete with a glance, and while it’s fine, I never find myself using it. The glance shows the current temperature and conditions, with the predicted high and low temperature and the time until sunset. That’s replicated on the first screen of the actual app, swiping left once provides the hourly forecast for the rest of the day, and swiping left again shows the 7-day forecast. There’s something about being able to see everything at once on the iPhone screen that makes me
prefer it to the Apple Watch’s tiny display.

Lastly, although Dark Sky defaults to showing you conditions and forecasts for your current location, you can add locations manually by tapping the location display at the top of the screen and entering the city’s name (and state or province, if necessary). Bring up the location display again to see the forecast for where you’re heading on vacation, for instance; you can swipe left in that list to delete unused cities. If you regularly want to check multiple widely separated locations, you’ll probably want to use a
different weather app that makes switching easier — Dark Sky is about hyperlocal forecasts, not checking the weather around the world.

Dark Sky 5 costs $3.99 from the App Store and works on the iPhone and iPad, although its iPad interface isn’t any different from the iPhone interface apart from being presented on a larger screen. Nevertheless, if you’re as weather-involved as I am, it’s worth the price.