You may have seen some strange images around the Internet lately — even stranger than usual. Pictures of everyday scenes, distorted to the point that they start to resemble peacocks. (The image below was taken by our own Jeff Carlson and processed with deepdreamer.io.) 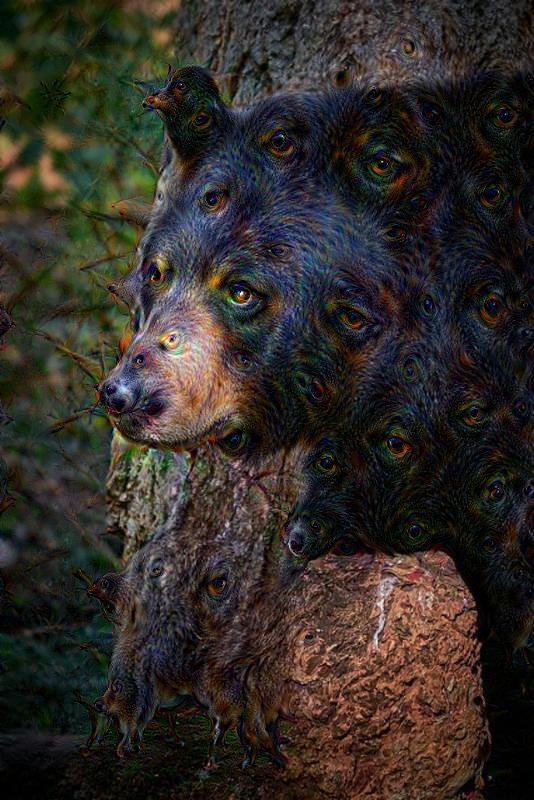 The source of this weirdness is none other than Google. The company developed an internal tool to visualize how neural networks think, and when the researchers found that their neural networks do some trippy things with images, they released the visualization code as DeepDream so that other developers could create their own
psychedelic art.

DeepDream has become a bit of an Internet sensation, with a number of tools built around Google’s code, and even a Reddit community dedicated to creating and sharing DeepDream artwork.

Now, Realmac, creator of stylish productivity tools like Clear and Ember, has released its own native Mac client, Deep Dreamer, currently in beta. Despite its beta status, many features are unavailable unless you pay $14.99 for a full license (however, Realmac offers a money-back guarantee for an unheard-of six months).

Deep Dreamer appears complicated at first, but it’s really quite simple. The Deep Dreamer window is split into three sections: the left side displays previews of presets, the middle portion is where you drop and view images, and the right-hand side lets you tweak the settings by hand. (The image I use in the following screenshot was also taken by Jeff Carlson.) 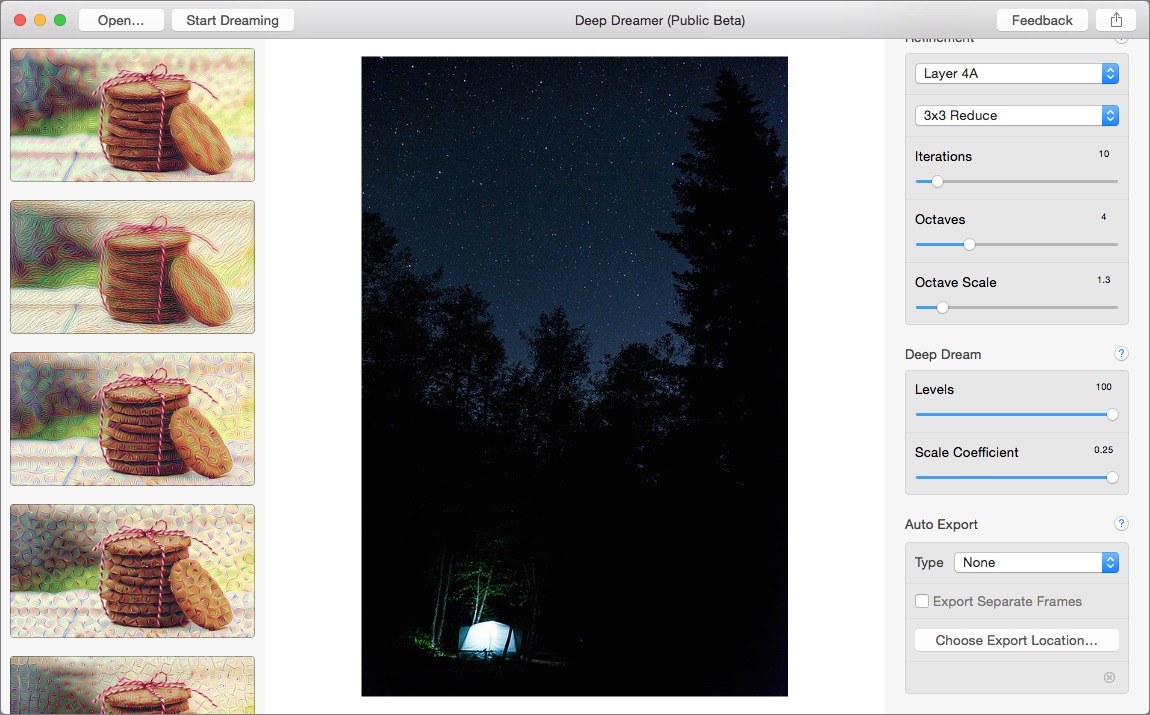 Click Start Dreaming to begin the process, which could take some time. If you’re patient, you can watch it unfold, and even stop it if it presents an appealing result before it’s finished. There’s a slider that lets you see the image both with and without the DeepDream effect. 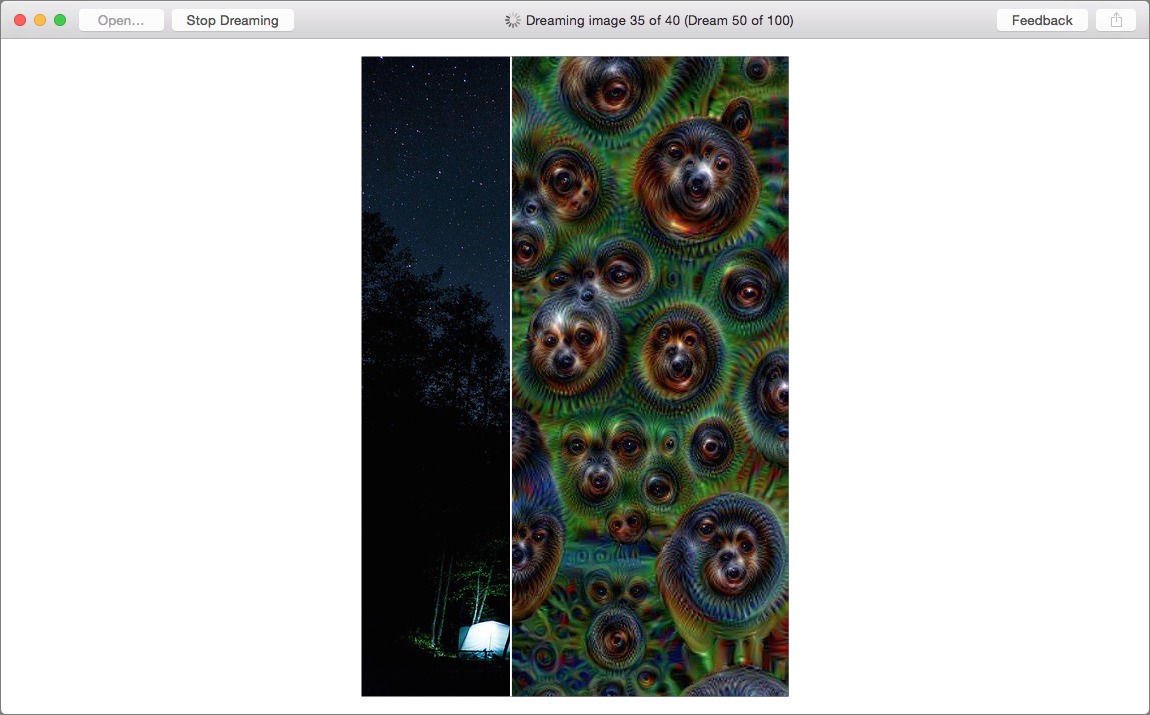 Unfortunately, Realmac doesn’t explain what all of these settings do. “We encourage you to explore the options in Deep Dreamer,” is all the manual says. But I will say that generally, the higher you crank up the settings, the weirder the output will be — and the more time and CPU cycles it will need.

It costs nothing to download Deep Dreamer and play around, but if you want to export what you create, generate transformation videos, and view more than two-thirds of the output, you’ll have to pony up $14.99.

I’m all for supporting developers, but it’s a bit irritating to be asked to pay that much to essentially test a beta. I could see paying that if DeepDream became a hobby, but it’s a bit much to dip my toe in. The other problem with Deep Dreamer is that since it processes images locally, it can be quite resource intensive for your Mac.

Thankfully, there are lots of Web-based alternatives. The one I like the most so far is deepdreamer.io, which is completely free and server-based. Upload a photo (or take one with a webcam), enter an email address, and deepdreamer.io will send you a link when it’s done processing. deepdreamer.io doesn’t offer as much control over the process as Realmac’s Deep Dream (nor is the output quite as bizarre), but it makes up for that by processing your image with seven settings, so you get seven different images as output, including three animated GIFs. It even keeps your previous images around, so everything’s accessible in one place. 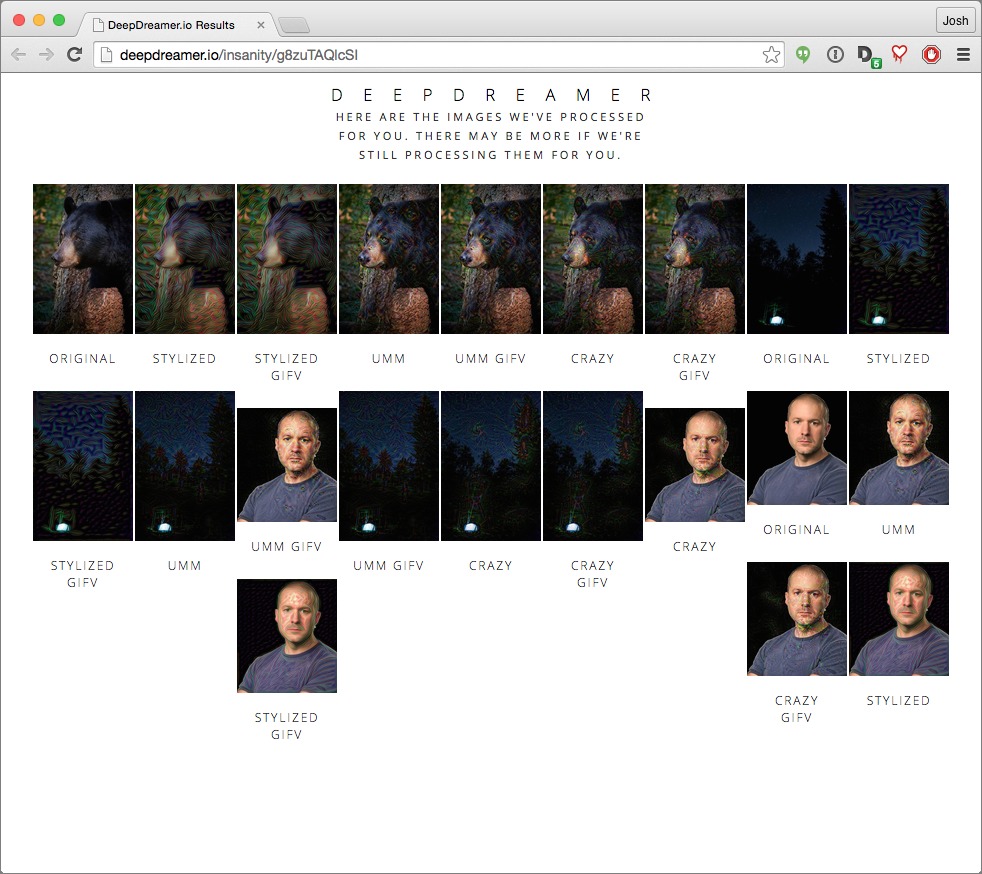 Regardless of which tool you choose, I recommend using source images that have a lot of color and contrast. I tried the classic “Jony Ive in a white room” image from Apple’s Web site, but the results were mediocre (deepdreamer.io translated the transparency in Ive’s Apple headshot to black, which made things a bit more interesting). In general, I found that the white-heavy Apple aesthetic tends to lead to boring results. What does seem to produce interesting results are nature shots, like the pictures of Jeff’s
that I used previously. I wonder what that says about neural networks?

In any case, now you know what the deal is with those bizarre images you may have seen online. It appears that machines think in a way that we may never understand.