Apple has released its “Inclusion & Diversity” report for 2015, providing an overview of the company’s gender, racial, and ethnic makeup. Apple CEO Tim Cook’s introduction to the report provides the context, saying that “Diversity is critical to innovation and it is essential to Apple’s future” and noting that the company aspires “to make a difference beyond Apple.” In addition, Tim Cook’s introduction to the report states that

In the United States, we hired more than 2,200 Black employees — a 50 percent increase over last year — and 2,700 Hispanic employees, a 66 percent increase. In total, this represents the largest group of employees we’ve ever hired from underrepresented groups in a single year. Additionally, in the first 6 months of this year, nearly 50 percent of the people we’ve hired in the United States are women, Black, Hispanic, or Native American.

The body of report provides a very high-level look at the company’s diversity make-up, presented attractively in interactive graphs. These graphs allow the reader to tunnel down to diversity breakdowns by role within Apple, such as “tech,” “non-tech,” “retail,” and “leadership.” 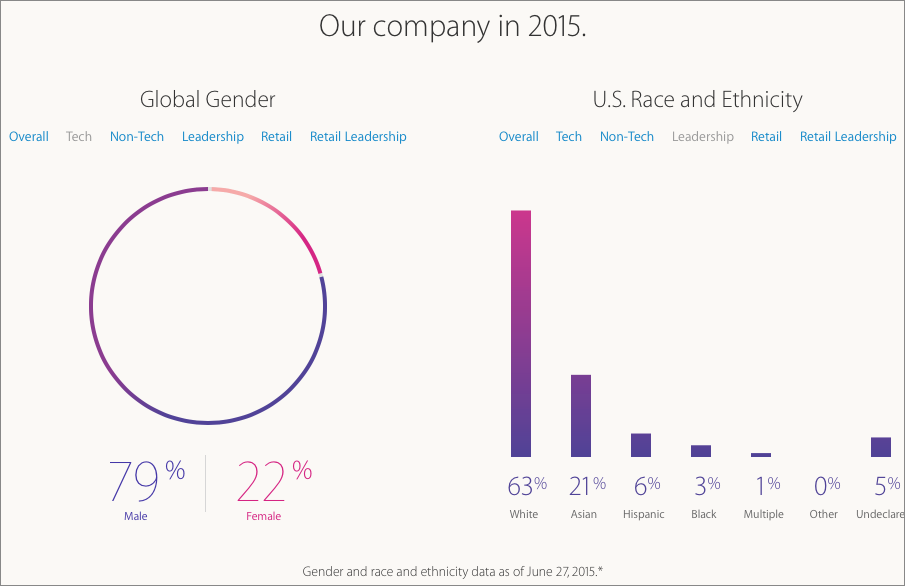 Although women are less well-represented in the technology portion of Apple’s workforce than in other parts of the company, Apple still leads its competitors when it comes the percentage of female technology workers: 22 percent, versus 18 percent for Google and 16.7 percent for Microsoft. Blacks, on the other hand, are nearly as well-represented in technology roles in Apple as they are in the company as a whole: seven percent of tech workers at Apple are Black, just one percentage point lower than the overall Black company average.

When it comes to leadership positions at Apple, the percentage of women is also higher than at its competitors: 28 percent at Apple, versus 22 percent at Google and 17.4 percent at Microsoft.

The percentages given in Apple’s report are only one part of the story: the report also summarizes efforts on Apple’s part to increase the diversity of future applicants. For example, to help encourage more diversity among developers, Apple’s 2015 STEM (science, technology, engineering, and math) partners include such groups as Latinos in Information Science and Technology Association (LISTA), National Society of Black Engineers (NSBE), and App Camp for Girls.

In addition, Apple has provided ConnectED grants for 114 schools across 29 states. 92 percent of the students in schools receiving these grants are, according to Apple, of Hispanic, Black, Native American, Alaskan Native, or Asian heritage.

However, as Tim Cook notes in his introduction, “we know there is a lot more work still to be done.” And he is right: women, for example, make up more than half of the United States population, Blacks more than 12 percent, and Hispanics more than 16 percent. Nonetheless, the company has traveled further down the road to diversity than its competitors, and has good reason to be proud of the progress it has made so far.