For decades, cellphone owners have relied on signal bars to determine the strength of the cellular signal. Since iOS 7, iPhone (and cellular iPad) users have become accustomed to signal dots, which do the same thing. But neither is a precise indicator, and you can’t necessarily predict what will or will not be possible when a particular number of dots are lit up.

Cellular reception in my area is awful, especially in my house. Sometimes voice calls work OK with one dot, but fail at three dots. Cellular data is even more unpredictable. My iPhone’s Internet connection often doesn’t work at all unless I have LTE coverage; 3G is almost as bad as no signal at all these days.

The folks over at Tech Insider have produced a video that will help you see what your signal strength is numerically, for troubleshooting purposes. But for some reason, they didn’t also write up the instructions for those who prefer reading. So if you fall in that camp, here’s how to see your iPhone’s precise signal strength: 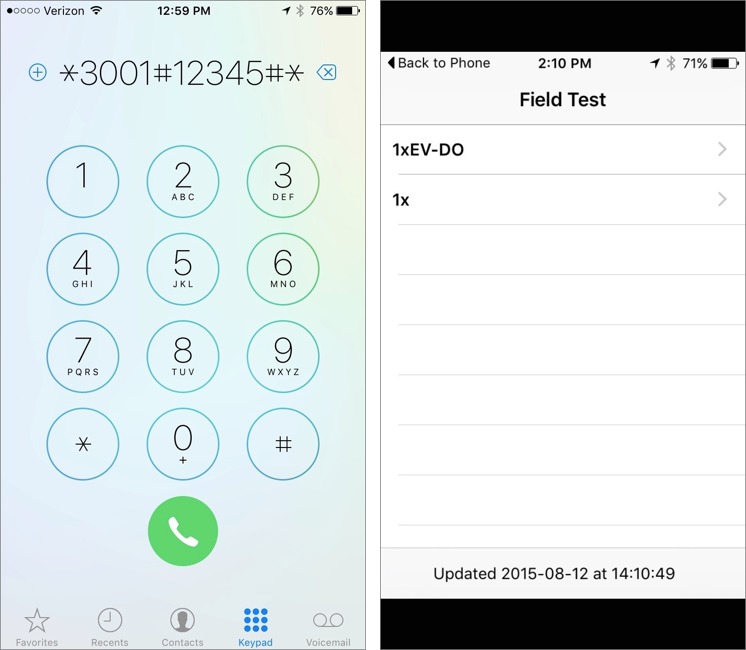 Instead of dots, you should now see a negative number in the upper left, like -102. This is your exact signal strength, measured in decibel-milliwatts, called the Received Signal Strength Indication (or RSSI if you want to impress technical support). The higher the number, the better, but note that these are negative numbers, so -1 would be an outstanding signal, while -1000 would be beyond poor. In the real world, you’ll probably see signal strengths somewhere between -40 (a five-bar signal) and -120 (a one-bar signal).

I’ve been arguing with Verizon Wireless for years about my poor service, and have consistently received the runaround. The closest I’ve come to receiving actual help was being told to dial ### after a dropped call to mark it in Verizon’s records. (Give that a try the next time you lose a call!) But since standard cellular voice calls drop so consistently, I usually use Google Hangouts or FaceTime instead, and thus never have an opportunity to report problems. Sigh…

Now I can go to Verizon with this new, accurate information, and maybe someone technically minded will take me seriously. I’m not going to hold my breath.

Comments About How to See Your iPhone’s Precise Signal Strength