Simon 4.1 — Dejal has released Simon 4.1, which redesigns the Web (HTTP) feature so that it now uses a list of pages including Parameters, Headers, Cookies, and Other. The server-monitoring tool also adds support for custom headers and now supports dynamic Web content (including dynamic JavaScript changes). The update also removes filter plug-in controls if the When pop-up menu for a test filter is changed to None, fixes a bug that prevented the Preview source from completely loading, moves the Delete menu item from the File menu to the Edit menu, adds a Chinese localization, and updates the German and French localizations in
some of the plug-ins. ($99 new, free update for version 4 licenses, $49 upgrade from version 3, 14.4 MB, release notes)

Evernote 6.1 — Evernote has released version 6.1 of its eponymous information management app with a darkened sidebar that helps to better differentiate the app’s sections. Evernote Business users are now required to use a new notebook view to differentiate between business and personal content, and tags are restricted to displaying the business tags of notes that you have access to (previously, all business tags were displayed). Evernote also overhauls the underlying technology used for its communication and collaboration features (with warnings of potential stability hiccups), fixes a printing bug that would cut off text on
the right side of the note, remedies several presentation mode bugs, and resolves an issue where attachments would look truncated in card view. Note that this is the final compatible release for Mac OS X 10.7 Lion and 10.8 Mountain Lion users. Additionally, Evernote 6.1 has not yet arrived in the Mac App Store at the time of this writing. (Free from Evernote or the Mac App Store, 60.5 MB, release notes, 10.7.5+) 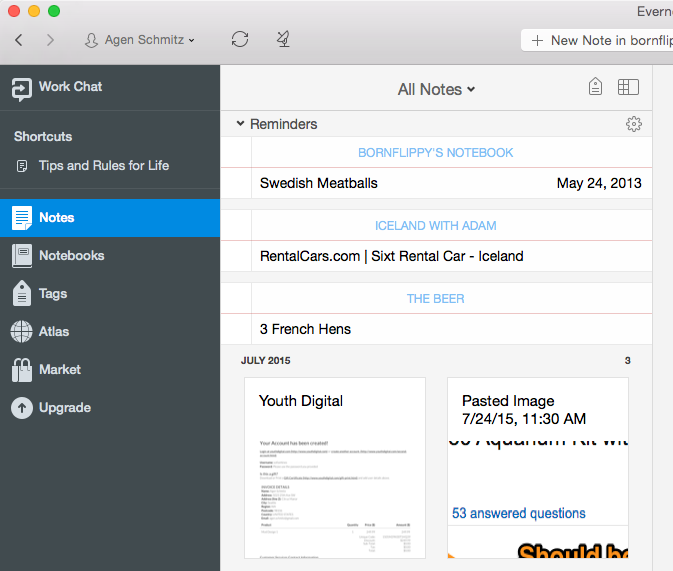 Parallels Desktop 11 — Boasting speed improvements of up to 50 percent and added support for both Windows 10 and OS X 10.11 El Capitan, Parallels Desktop has been updated to version 11 and divided into two editions — the standard Parallels Desktop edition for home and student use and a Pro Edition that’s designed for developers. A third Business Edition is also available with IT administration features. All three editions bring always-on support for the Cortana voice-controlled personal assistant, a Travel Mode that can help extend battery life by up to
25 percent, Quick Look for Windows, Force Touch gesture support, improved printing support, and support for Mac location services to Windows applications.

The Pro Edition integrates developer tools such as Docker, Visual Studio (plug-in), Chef, and Jenkins; offers support for Vagrant; provides the option of adding user profiles to fit specific testing scenarios; and adds a headless mode for running virtual machines in the background without a user interface. It also includes a free subscription to Parallels Access. The Business Edition (previously known as Parallels Desktop for Mac Enterprise Edition) includes these features other than Parallels Access, while also enabling centralized administration and management for larger deployments. Parallels provides a handy comparison chart of its three editions.