Released in 1980, Pac-Man is one of the genuine classics of gaming. I don’t think it’s an exaggeration to say that it is to video games what the Gutenberg Bible was to publishing. You’d be hard-pressed to find anyone on the planet, regardless of age, who hasn’t played it or isn’t at least familiar with it. And its gameplay concepts changed the course of gaming history.

But developer Namco never recaptured that magic. Pac-Man’s hugely successful immediate sequel, Ms. Pac-Man, was actually created by another company, and Namco’s own Super Pac-Man wasn’t a hit. Nevertheless, the Pac-Man character has been squeezed into platformers, racing games, educational titles, and even fighting games with usually only modest success at best. Nor has the original game, with its need for quick controls and a large screen, translated well to mobile.

After more than three decades, developer Hipster Whale has figured out how to revive that Pac-magic. After last year’s Crossy Road, which resurrected Frogger for the iPhone generation, Hipster Whale has respun Pac-Man as Pac-Man 256, again designing it from the ground up for mobile devices. It’s free with in-app purchases for the iPhone and iPad, but isn’t compatible with the iPhone 4 or iPhone 4S. Check out the trailer.

Why is it called Pac-Man 256? Have they really made that many sequels? Possibly, but the real reason hearkens back to a bug in the original game. In Pac-Man, the level counter was stored as an 8-bit integer, which meant that the highest value it could hold was 255. A bug caused the counter to advance to 256, jumbling the right side of the screen in a mess of ASCII gibberish and making the level impossible to beat.

Hipster Whale cleverly riffs on this infamous bug to convert Pac-Man into a sort of infinite runner. You start your maze chase by swiping up, and you need to keep moving up, because The Glitch slowly advances upon you, consuming everything it touches. Unlike the original Pac-Man, which had multiple maze levels, Pac-Man 256 is one never-ending maze. 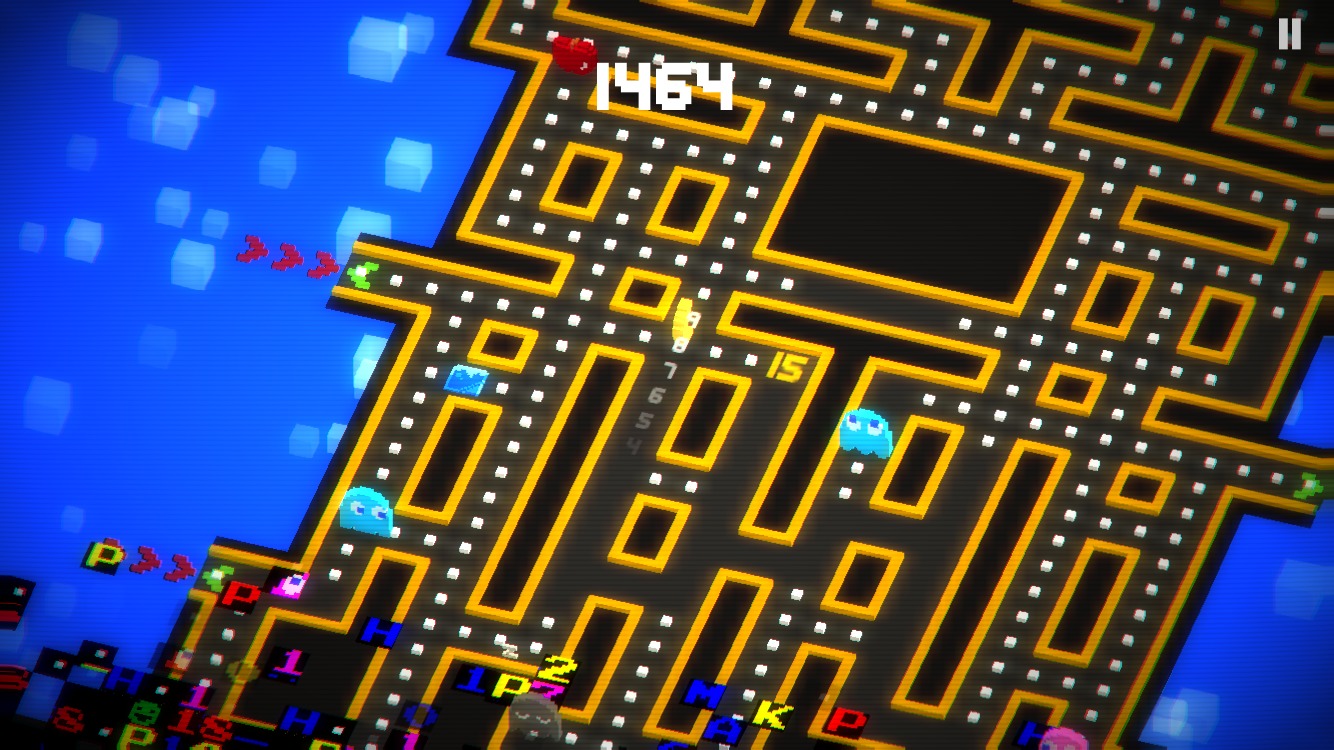 Other changes to the Pac-Man formula help Pac-Man 256 adapt to smartphones and tablets. Instead of a top-down view, the camera sits at an angle, which gives it a more modern look. The controls are based around swipes, which work quite well.

The basics of the Pac-Man formula are still there. You still eat dots, get chased by ghosts, and eat power pellets that let you turn the tables on the ghosts. But, of course, Hipster Whale has mixed things up. Ghosts now use a variety of tactics. Some patiently wait to ambush you, while others band together to form moving obstacles. 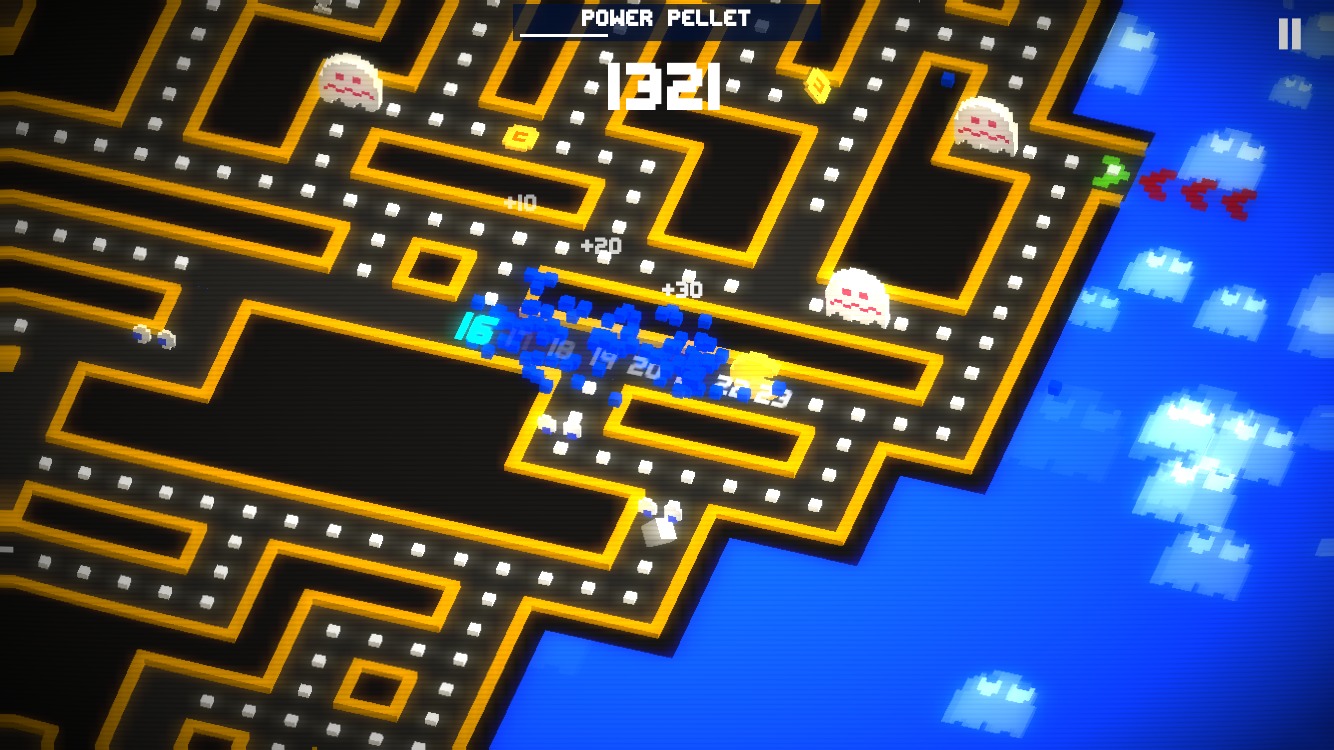 Where Pac-Man 256 gets wild are in its power-ups, which go far beyond the plain-vanilla power pellet. As Pac-Man consumes dots, you unlock various power-ups, such as lasers that can blast an entire row of ghosts, ice blocks that slow ghosts down, and bombs that blow up any ghost that bumps into Pac-Man. You can have up to three different power-ups on the board at a time, which you activate by crossing over their icons. But only one can be active at a time; any other power-ups on the board turn into white cubes that
extend the duration of the active power-up. (Thanks to Richard Anderson for that tip!) 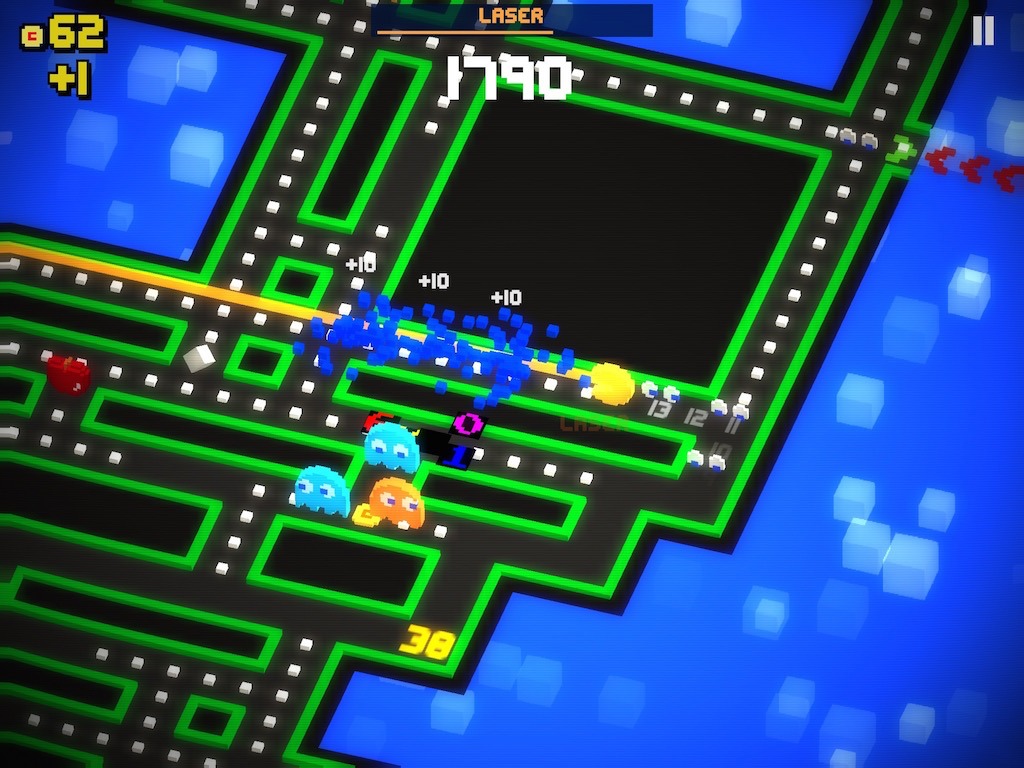 Pac-Man 256 is a lot of fun, but unfortunately, touch controls and an infinite maze aren’t the only things that update Pac-Man for the iPhone generation. This is a “free to play” game with in-app purchases, and includes all the scummy practices that come with that approach.

To play a game of Pac-Man 256 with the new power-ups, you have to spend one credit. You get six credits by default, and they take about ten minutes each to recharge, whether or not you’re playing the game. You can opt for a “free play” with none of the new power-ups available, but that kind of takes the fun out of it.

If Pac-Man dies, you can spend a credit to continue once. If you run out of credits, you can watch an unskippable 30-second ad to carry on. You can also buy more credits: either 12 for $0.99 or unlimited credits for $7.99.

There are also coins to collect, which you can spend to make each power-up last longer. You can pick up a few coins in the maze, earn coins by eating five or more power pellets, or tap an Earn Gift button after a game, which again subjects you to a 30-second ad, but randomly awards you coins or credits. You can also buy a coin doubler for $4.99 that doubles the coins you earn.

When you upgrade a power-up, that power-up becomes unavailable for a set amount of time: the first upgrade takes 5 minutes, the second one takes 10 minutes, and so on. Such arbitrary waiting periods are yet another “feature” of “free to play” games.

While it’s nice that I can pay once and have all the credits I want, there are still the ads, waiting periods, and coins to deal with. I’d like to be able to pay just a little bit more and eliminate all the annoying vestiges of a “free to play” game. As it stands, I never feel like I truly own the game. In that sense, I suppose Pac-Man 256 is true to its quarter-munching arcade roots.

But if you play Pac-Man 256 casually, you’ll likely never be asked to pay money, and the ads are easily avoided. All in all, Pac-Man 256 is a fun and refreshing reboot of the historic Pac-Man franchise for the mobile era. Too bad it also brings the worst of today’s gaming business model with it.