In the early days of Mac OS X, Apple made a big deal about how most applications were, by design, self-contained. To install them, you dragged them to your Applications folder, and to uninstall them, you dragged them from there to the Trash. Done! Everything you needed was contained in the application package — a folder that looks and acts like a single file. That was the theory, anyway.

Of course, it wasn’t quite true that apps were self-contained. Even for simple drag-to-install apps, there would nearly always be preference files, logs, and a few other items stored elsewhere. As Mac OS X evolved, more and more apps needed to put more and more files in more and more places. Running an installer or opening an app for the first time might scatter files all over the place, particularly in various subfolders of /Library and ~/Library, such as Application Support, Caches, Frameworks, and LaunchAgents. An app might also add login or startup items, System Preferences panes, Dock icons, menu bar doohickies, and assorted background processes.
Pretty soon, figuring out how to get rid of all that extra stuff when you wanted to stop using an app became a serious concern.

In 2010, Macworld asked me to write an article about uninstallers. The two questions I was tasked with answering were “Are they safe?” and “Do they work?” Long story short, the answers were “Yes” and “Yes,“ with various qualifications (see “Mac utilities: Do uninstallers work?”). I tested four of the most popular uninstaller apps available at that time, and found that although they all missed certain files, and some were easier to use than others, they seldom removed things they shouldn’t — and even when they did, it was rarely a serious problem.

The uninstaller landscape has changed since then, but uninstallers are still as important as ever. And since most Mac developers (for reasons I can’t quite fathom) don’t provide their own, a third-party uninstaller utility is handy to have around. That’s how I mainly think of CleanMyMac 3, even though the developer, MacPaw, positions it as an all-purpose cleaning and maintenance app. I’ve found it to be a great way to find and eliminate stuff I don’t need on my Mac — especially on my MacBook Pro, whose too-small SSD is constantly on the verge of filling up.

A Reality Check — Before I get into the specifics of what I like about CleanMyMac, I want to take issue with a marketing assumption that underlies nearly all Mac maintenance apps, including this one: that deleting files is a magical cure for your Mac’s problems. While it’s true that your Mac can slow way down and exhibit all sorts of misbehavior if you run out of disk space entirely (or come close to it), someone with 1 TB of free space is no better off, performance-wise, than someone with 100 GB of free space. There are good reasons to delete things you don’t need even if you’re not short on disk space (such as preventing or resolving software incompatibilities,
and reducing the time and disk space required for backups), but if you already have plenty of free space and you’re looking only for a performance boost, deleting stuff may be a waste of your time.

Likewise, a lot of the ostensible “junk” that maintenance utilities remove is in fact useful (which is not to say essential). All those gigabytes of cache files, for example, may seem worthless but are in fact helping numerous processes on your Mac to run more quickly and efficiently; removing them may slow down your Mac rather than speed it up. And, because Mac OS X rebuilds caches automatically anyway, that space savings you achieve by deleting caches will soon disappear.

And I should also point out that no matter how thorough a maintenance app may be, no app, by itself, handles all the preventive maintenance tasks you should perform regularly to keep your Mac in top working order. I talk about a great many more in my new book “Maintaining Your Mac: A Joe On Tech Guide,” which also covers a variety of other maintenance apps.

So, you should approach CleanMyMac, or any app of this sort, with the right expectations (and a bit of circumspection). It will help you find and remove files you don’t need, uninstall unwanted apps (including all those pesky, scattered files), and perform other useful maintenance tasks. But it might not improve your Mac’s speed, and if you want the best and safest results, you should carefully examine all its recommendations before agreeing to let it delete anything.

Cleaning Features — Let’s get down to specifics. CleanMyMac divides its features into two sets — cleaning (that is, deleting stuff) and utilities (including the Uninstaller and a long list of other tools). When you launch the app, you’re initially presented with a Smart Cleanup screen, which gives you a simple way to run all the cleaning tasks at once. Your first step — which is, itself, nondestructive and safe — is to click Scan so that CleanMyMac can figure out what may be ripe for deletion. 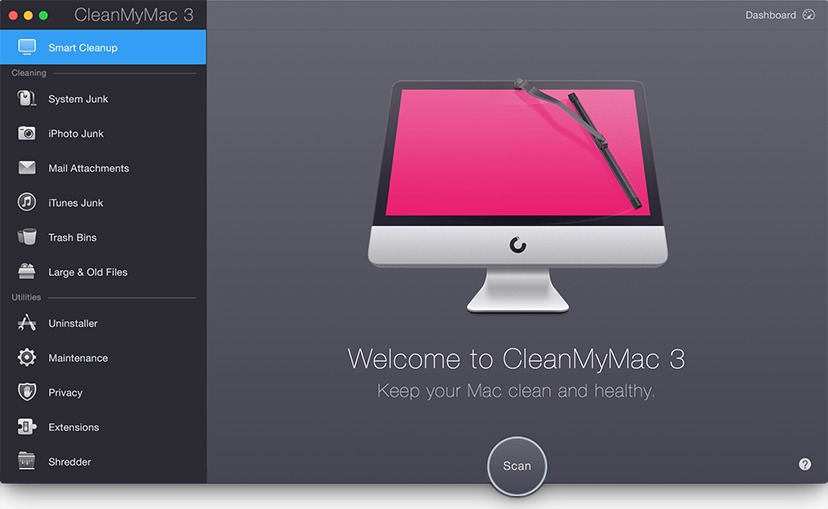 Do click Scan and wait for the results, but don’t click Clean until you’ve reviewed all the candidates (which you can do by selecting a category and then clicking Review Files or Review Details) and deselected anything you want to keep. 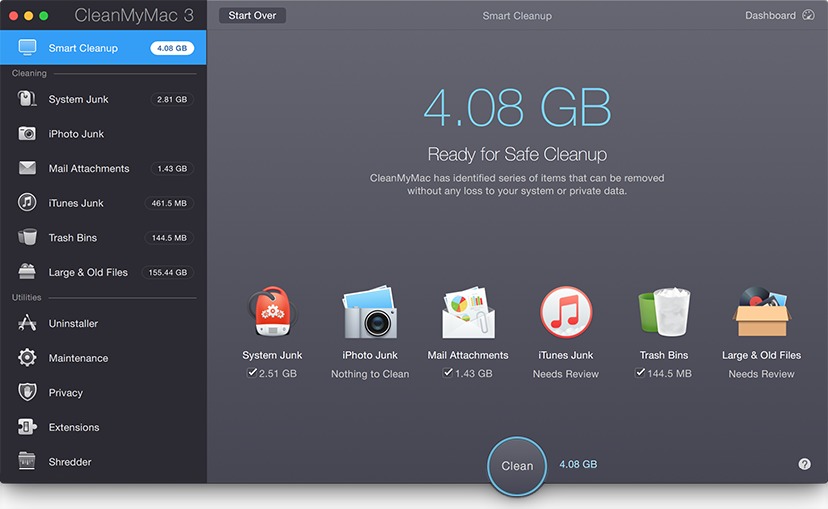 Here are the categories CleanMyMac considers:

Although CleanMyMac’s cleaning features are no panacea, I’ve found them to be both effective and safe. But they’re just a part of what this app can do.

Uninstaller — My favorite feature in CleanMyMac 3 (and the first one listed under Utilities) isn’t flashy, but it’s effective: the Uninstaller. After you’ve scanned your disk, it lists all your apps. Select any app to see all the files CleanMyMac thinks are related to it. You can then check the box next to the app’s name to select all the related files, or individually select or deselect any files you want to keep. To erase the selected files, you then click Uninstall. (You can also click an Application Reset button to delete only preferences and supporting files, returning the app to its original post-installation state.) 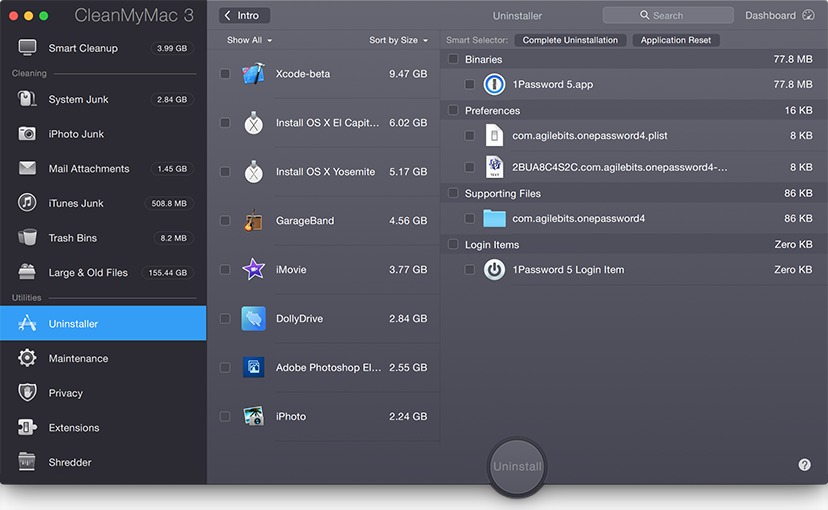 You can uninstall multiple apps at once, and search for apps by name. The Uninstaller also lets you sort apps by size, name, last launch date, and so on, and lets you filter the display to show old, unsupported apps that are no longer compatible with your Mac anyway.

Other Utilities — The remaining utilities are features that, with one exception (Extensions), I consider largely filler — they’re no big deal and there are other (free) ways to do the same thing:

Dashboard and Menu — CleanMyMac 3 has two other components worth mentioning. The Dashboard, which you can reach by clicking the Dashboard button on the CleanMyMac window, provides real-time statistics about disk space, RAM, and CPU usage, as well as your battery level (if applicable). You can hover over the graphs with your pointer for more details (though it would be far better if CleanMyMac did not hide them in the first place). 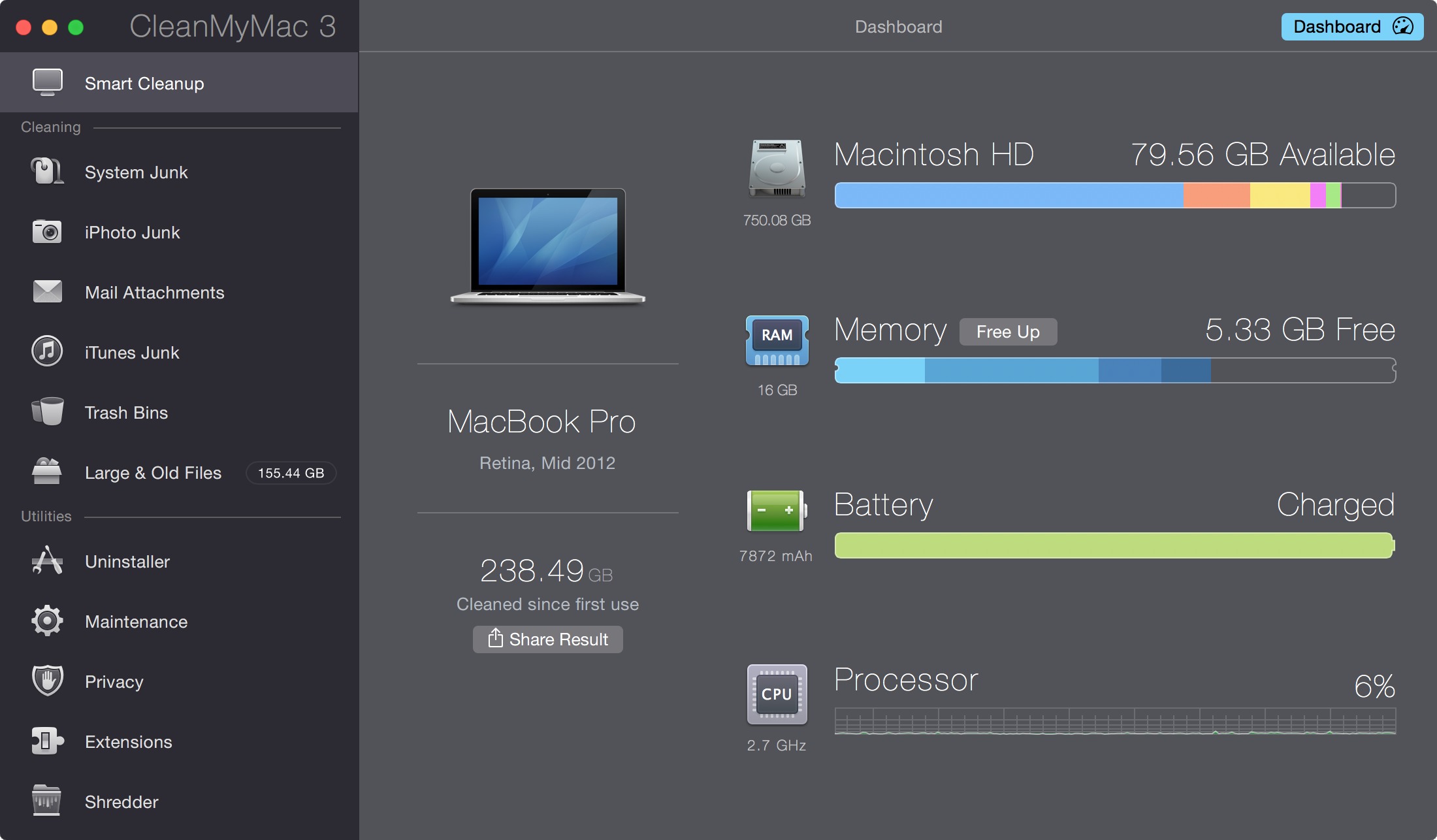 Next to the Memory label is a Free Up button; you click it to “free up” extra RAM. MacPaw doesn’t say exactly how this works. Sure, the amount of “free” RAM goes up after you click the button, but I suspect it’s merely purging RAM contents that OS X itself would have purged as needed (somewhat like the purge command-line tool). So the increase in free RAM might be largely illusory.

There’s also an optional system-wide CleanMyMac menu, which is enabled by default. This menu shows the same data as the Dashboard (including a Free Up Memory button if you hover over the Memory category). But in addition to displaying statistics on demand, the menu component includes a background process that watches for certain conditions and alerts you when they occur. 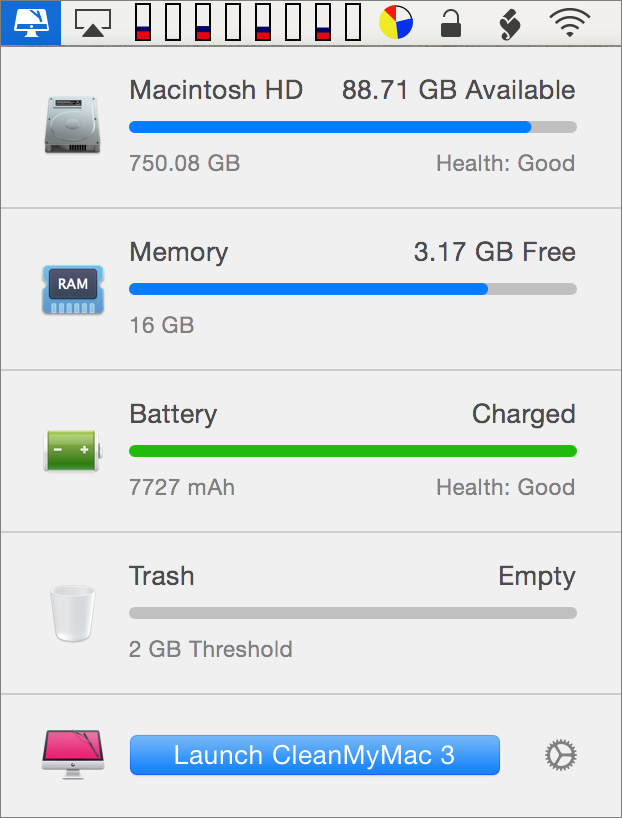 When I started using CleanMyMac 3, I felt the menu component was excessively chatty and intrusive. Notifications frequently reminded me to perform cleanups, for example, but I don’t want or need to be reminded. You can change the reminder frequency, or turn off reminders, in CleanMyMac 3 > Preferences > Scheduler. Similarly, you can change or disable the notifications that appear when you get low on disk space (where “low” is whatever figure you choose), or when your Trash exceeds a certain size, in CleanMyMac 3 > Preferences > CleanMyMac 3
Menu. Additional notifications you can’t disable without turning off the menu entirely include impending disk failure (as reported by a drive’s S.M.A.R.T. monitoring system), battery failure (which OS X itself will report), and excessive RAM usage.

The menu also notices when you drag an app to the Trash and asks if you want CleanMyMac to uninstall it completely. That’s not unreasonable (as it prevents having useless, leftover files), but if you dislike this behavior, you can turn it off in CleanMyMac 3 > Preferences > CleanMyMac 3 Menu. The same pane also lets you turn off notifications that appear when an app isn’t responding, and you should definitely turn it off. I found that even if an app failed to respond for a few seconds because it was clearly busy doing something important, CleanMyMac prompted me to force-quit it. But doing so would only mean the app would have to restart that task when I launched it again. If an app is truly hosed, I can force-quit it with
Command-Option-Esc; I don’t want or need CleanMyMac’s help.

Bottom Line — The presence of a few “meh” features notwithstanding, I’ve found CleanMyMac3 to be both effective and safe. It’s easy enough for a beginner to use, the explanations of each feature are useful, the Help is helpful, and I even happen to like the little animations and sounds that accompany most actions in the app (though you can turn them off if they bother you). CleanMyMac 3 runs on OS X 10.8 Mountain Lion or higher. It costs $39.95 for one Mac, $59.95 for two Macs, or $89.95 for five Macs, and is a 31 MB download. A free trial version lets you delete up to 500 MB of data and use up to three of the maintenance utilities.

To learn how CleanMyMac fits into an overall strategy of preventive Mac maintenance, be sure to check out “Maintaining Your Mac: A Joe On Tech Guide.”

Comments About Save Space and Uninstall Apps with CleanMyMac 3