Apple CEO Tim Cook opened the iPad portion of Apple’s media event in San Francisco by saying that the iPad is the “clearest expression of our vision of the future of personal computing.” As an example of that vision, iPad Pro, with its ancillary but desirable peripherals, is coming in November 2015. Here’s what’s new in iPad land.

We’ll start with an appetizer: the iPad mini 4. Compared to the iPad mini 3, which it replaces, this revision of the smallest iPad is thinner and faster, and boasts a better camera, for the same price. (Cases made for the iPad mini 3 may not fit; check with the manufacturer before buying.) It’s available now, as are select previous models, some at lower prices. But that’s not what you came here for, right? Well, here you go…

The so-often-rumored-it-became-a-running-joke iPad Pro is indeed coming, and in three colors (silver, gold, and space gray), sometime in November. The device looks like almost every other iPad you’ve ever seen, except this one has a 12.9-inch screen containing 5.6 million pixels in a housing that is 12 inches (305.7 mm) high by 8.68 inches (220.6 mm) wide by 0.27 inch (6.9 mm) deep, just a smidgen thicker than an iPad Air 2. It weighs 1.57 pounds (713 cm), just a smidgen heavier than the original iPad. 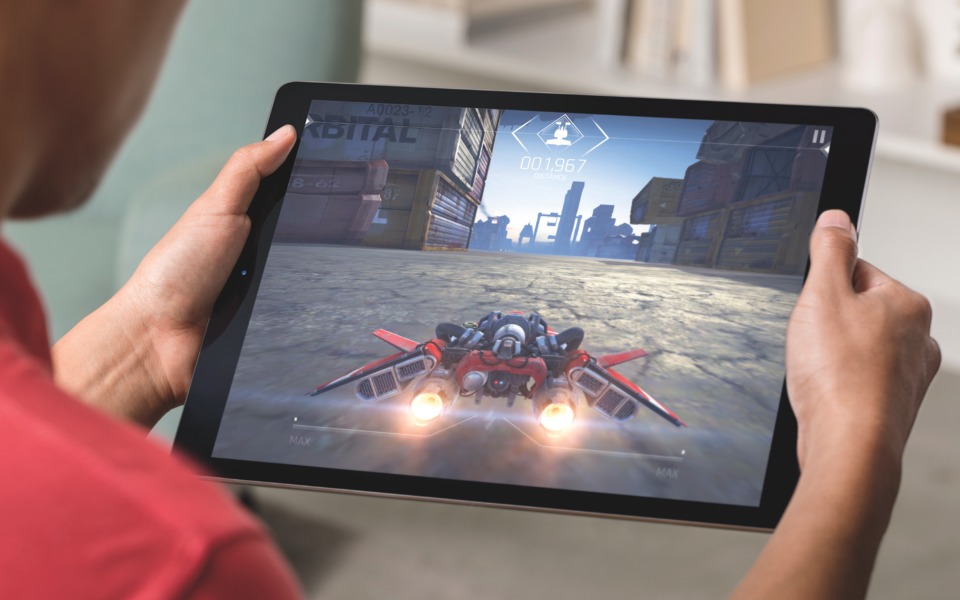 Internally, the iPad Pro features Apple’s latest A9X processor with an M9 motion coprocessor that exceeds the performance of earlier models, as Apple’s comparison chart makes abundantly clear. What it all boils down to, though, according to Apple, is that this device is faster than 80 percent of the portable computers that shipped in the last year — possibly including some developed by a company in Cupertino.

The screen dimensions, 2732 by 2048 pixels (at the iPad standard Retina display pixel density of 264 pixels per inch), are deliberate: the shorter dimension is exactly the same as the height of an iPad Air/Air 2 screen, allowing for the full vertical display of an iPad app when the iPad Pro is in landscape mode. This leaves ample room on the side for a second app’s display by way of iOS 9’s new Split View feature. Added to all that are four speakers — two on the top and two on the bottom — designed to provide high-quality stereo playback no matter how the device is oriented. It also offers the same 10-hour battery life that has been standard for nearly every iPad since the very first model.

A faster iPad with better sound and a bigger screen (big enough, in fact, that the onscreen keyboard is full-size) is not all that makes this device a professional model. It’s the accessories that make it a possible substitute for the typical notebook computer hauled around by a traveling professional. The first is the Smart Keyboard that serves the same function as the Smart Cover available for other iPads — except that this cover has an integrated physical keyboard with cloth-covered 4mm-high keys that are “laser ablated to form the shape of each key.” According to Apple, the cloth covering provides tactile feedback without requiring a thicker mechanism. The Smart Keyboard
makes use of three small magnetic Smart Connectors on the side of the iPad Pro to both power the keyboard and communicate with the iPad Pro. The direct connection means that no squirrelly Bluetooth pairing is required, nor is there any risk of some nearby Bluetooth hacker surreptitiously purloining your keystrokes.

The second accessory is the type of device that Steve Jobs summarily dismissed (but that our own Josh Centers predicted in “How Likely Is an Apple Pen?,” 6 February 2015): a stylus, called the Apple Pencil. As is typical of many Apple takes on existing devices, this is no ordinary stylus. The Apple Pencil includes sensors that communicate, 240 times per second, with other circuitry built into the iPad Pro screen to provide precise motion, location, tilt, and force data. Check out the impressive Jony Ive video explaining how the Apple Pencil works. Of course, such a stylus requires
power, which is why Apple built a Lightning connector into the top of the Apple Pencil: plug it into the iPad Pro for 15 seconds to give it enough charge for 30 minutes of use. A full charge can power the Apple Pencil for 12 hours.

Apple showed how the iPad Pro could support both office and creative tasks. Kirk Konigsbauer from Microsoft demoed Office apps working side-by-side on the screen, with a user scribbling notes right on a document using the Apple Pencil and efficiently copying and pasting data between windows. Next up was Eric Snowden from Adobe, who showed off a non-destructive layout workflow with text, a photo, and a drawing in a three-app suite of Adobe apps: Comp CC, Photoshop Sketch, and the new Photoshop Fix.

But, as the folk in infomercials inevitably ask: how much will all of this cost you? For the iPad Pro it depends on the model: the low-end model with Wi-Fi and 32 GB of storage will cost $799; the high-end Wi-Fi model with 128 GB of storage will cost $949; and a high-end model with 128 GB of storage and both Wi-Fi and cellular capabilities will sell for $1,079. The Smart Keyboard will run you $169, and the Apple Pencil scribbles another $99 onto your bill. In other words, about $1,347 for a top-of-the-line portable setup weighing less than 2 pounds.

Compare the price of the iPad Pro to $1,449 for a fast MacBook Air, a 13-inch model with a 2.2 GHz dual-core Intel Core i7 processor, 8 GB of RAM, and 256 GB of flash storage — which, by the way, lacks both a Retina display and cellular connectivity, and weighs a full pound more than a fully tricked-out iPad Pro. While many professionals need an actual Mac, with all the software and attendant services it can exploit, many others do not. It seems likely that the iPad Pro will eat up some of the sales that would otherwise be destined for the MacBook Air (and the new 12-inch MacBook). Apple is no stranger to cannibalizing one product line for the benefit of another (the iPhone pretty much killed the iPod), and the iPad Pro may continue
that tradition.

Apple has long labored at developing advanced technology that makes itself and the device containing it almost disappear in order to provide a richly immersive user experience — that’s Apple’s vision of personal computing. The iPad Pro with its Smart Keyboard and Apple Pencil are an impressive-looking, if not inexpensive, next step in that vision.