Even if you didn’t hear the rumors about Apple’s big media event in San Francisco, you could easily have guessed that Apple would roll out new iPhone models. Following a pattern that goes back years, Apple introduced the iPhone 6s and iPhone 6s Plus, devices that share the same form factor as last year’s iPhone 6 and 6 Plus models but with significantly upgraded components. New to the line, however, are a few hardware and software additions, plus an upgrade deal, that make the iPhone 6s and 6s Plus especially interesting.

3D Touch — When Apple introduced Force Touch for the Apple Watch, we knew it would make its way to the iPhone. But just because the device recognizes when you’re pressing harder doesn’t make it a compelling feature. What’s interesting are the resulting actions, which Apple is calling 3D Touch on the new iPhones.

On the watch, Force Touch brings up additional options that aren’t visible in the interface, such as for switching watch faces or clearing all notifications. 3D Touch on the iPhone 6s and iPhone 6s Plus goes a step further by providing two new gestures: Peek and Pop.

As the name suggests, a Peek is a quick look into an item without fully opening it, invoked with a slightly harder-than-normal press on the screen. For example, pressing the Subject line of an email message in Mail reveals the contents of the message without opening it (and then requiring you to return to the Inbox). Or, if you see an interesting photo in your Instagram timeline, pressing it displays a preview. Items in the background get blurry to enforce the idea that you’re viewing something above everything else in the interface. 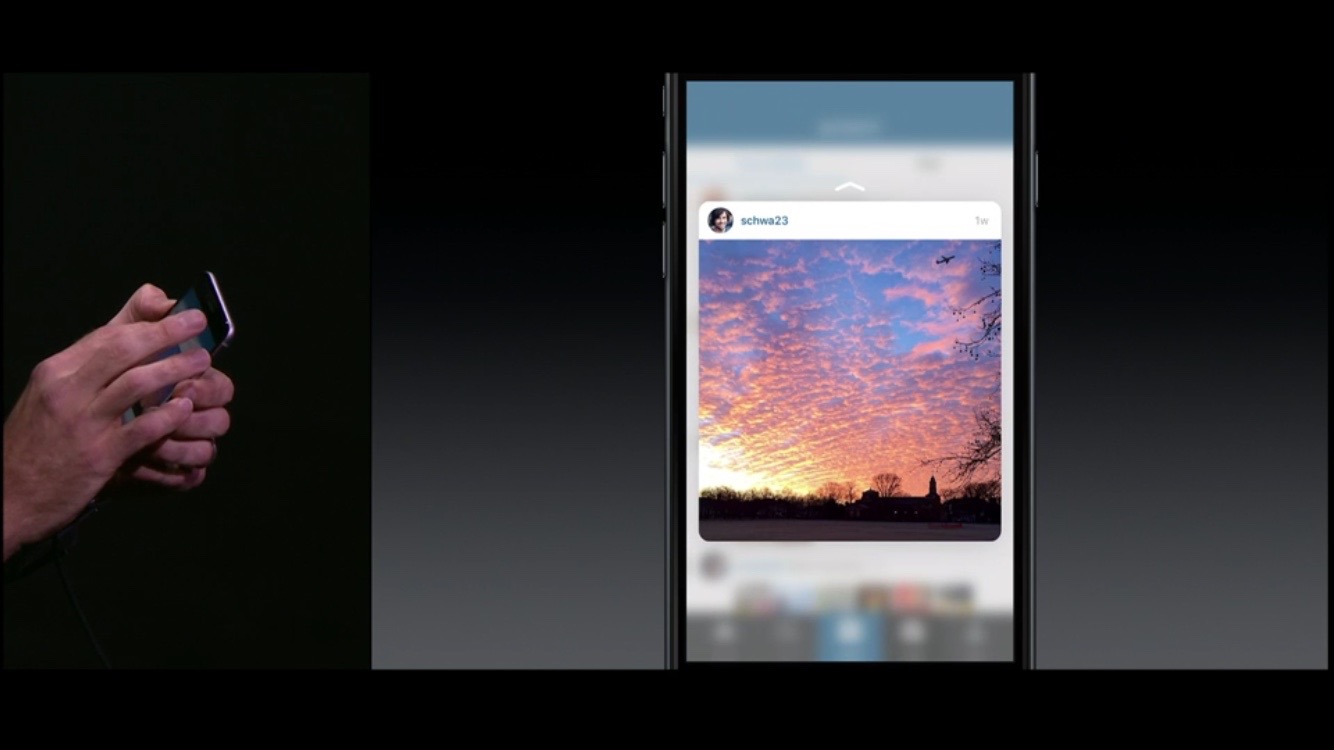 A Pop involves pressing a little harder yet to go ahead and load the message or page — again, without exiting the Peek or taking your finger off the screen to switch apps.

3D Touch also enables Quick Actions, which I think will be far more useful. For example, from the home screen, press the Phone app icon to call a favorite contact immediately; press the Camera app icon to take a selfie, record a video, record a Slo-Mo movie, or snap a photo; or press the Maps app to get directions home, mark your current location, send your current location, or search for nearby places or businesses. A lot of these Quick Actions are essentially like contextual menus on the Mac. 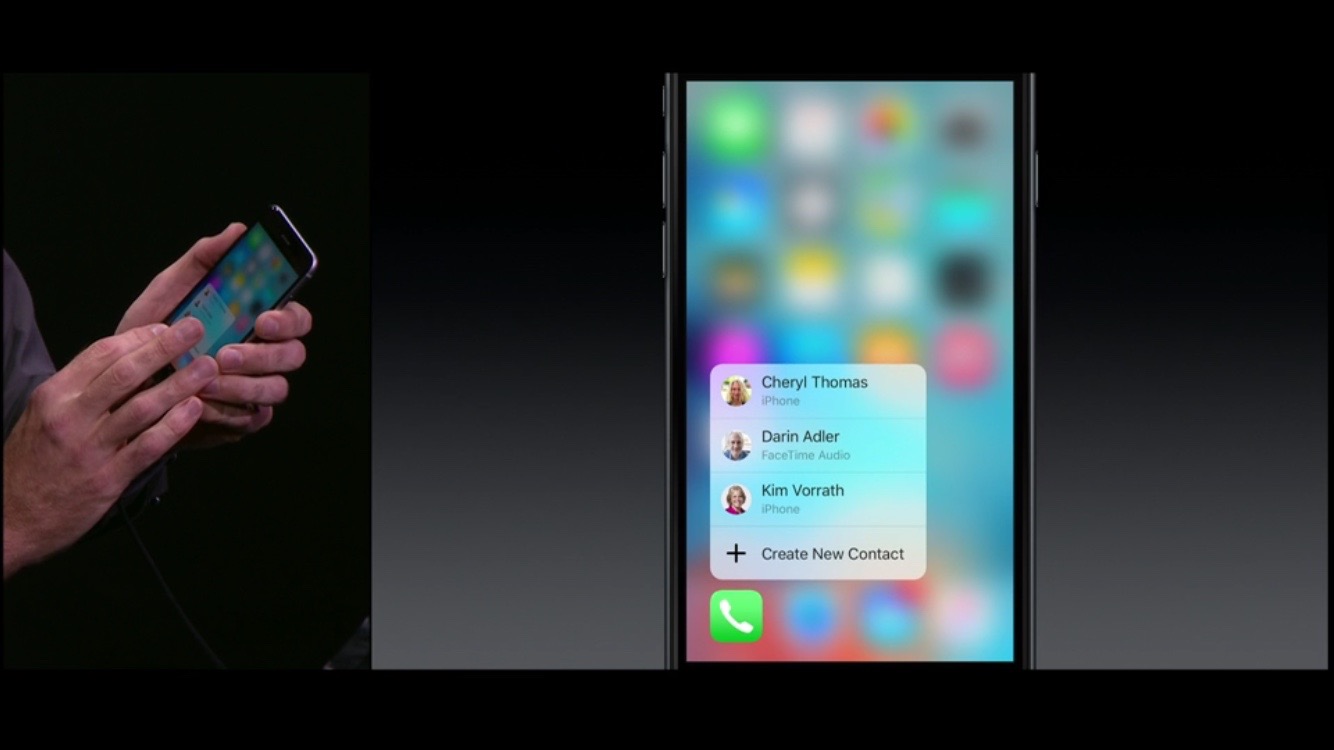 These 3D Touch actions are often supplemented by swipes to do more. If that email you peeked at turned out to be nothing important, swipe right to mark it as read. 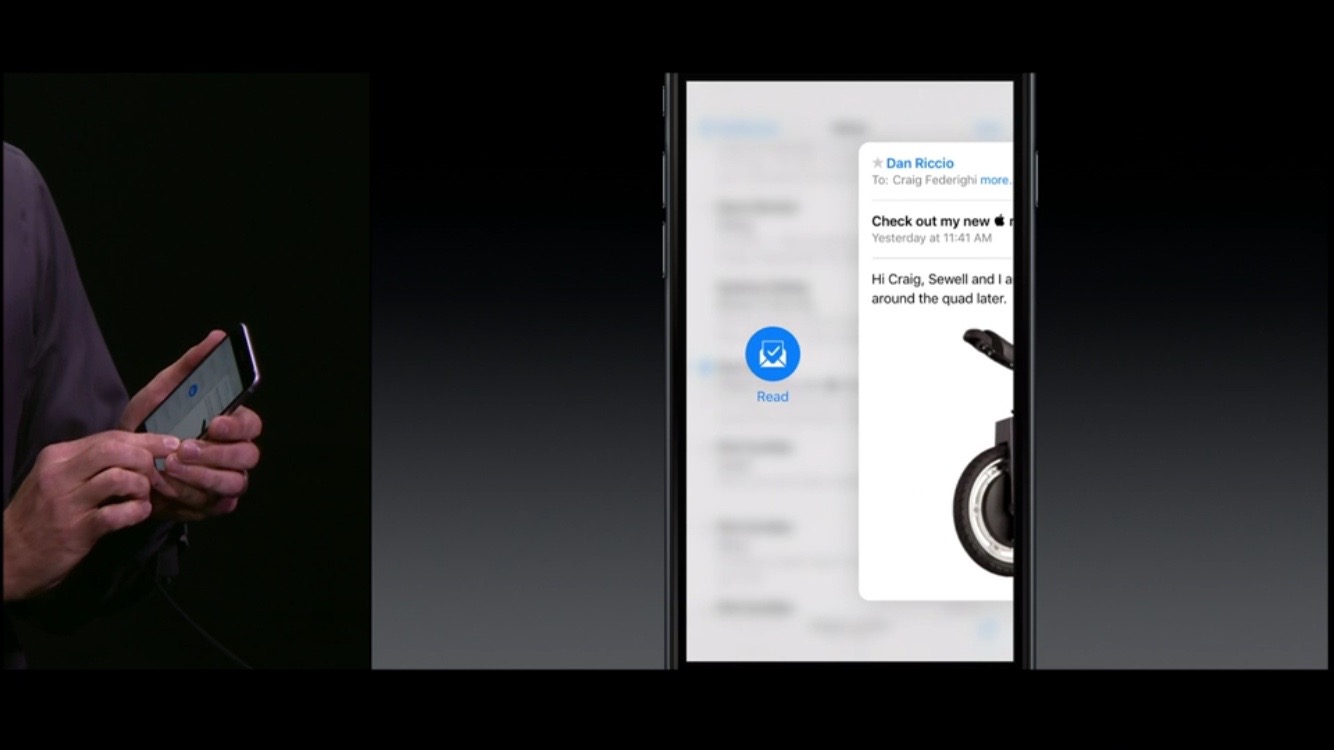 The technology to make 3D Touch work is interesting stuff, as described on the iPhone’s Technology page and shown in Apple’s video about the feature.

Bloomberg Business also published a behind-the-scenes look at how 3D Touch came about.

Camera Tricks — Also following a familiar playbook, Apple is using the iPhone “s” line to punch up the photo capabilities of what has become one of the world’s most popular cameras.

The iSight camera on the back of the phone now captures 12 megapixels of information per image, up from 8 megapixels in the iPhone 6 and iPhone 6 Plus. Megapixels can be useless if the increase in sensitivity doesn’t actually improve photo quality — having more low-quality image sensor points just makes a larger low-quality image — so Apple Vice President of Marketing Phil Schiller made a point to describe how the new sensor is better. In addition to including 50 percent more pixels (and therefore 50 percent more focus pixels; to learn more about the technology, see “Apple Announces iPhone 6 and iPhone 6 Plus with Larger Screens,” 9 September 2014), the filters that clarify color
have been moved from above the sensor array to the array’s top. Apple also uses deep trench isolation, a technique that separates the photo diodes and limits the amount of light that bleeds between adjacent photo sensors. 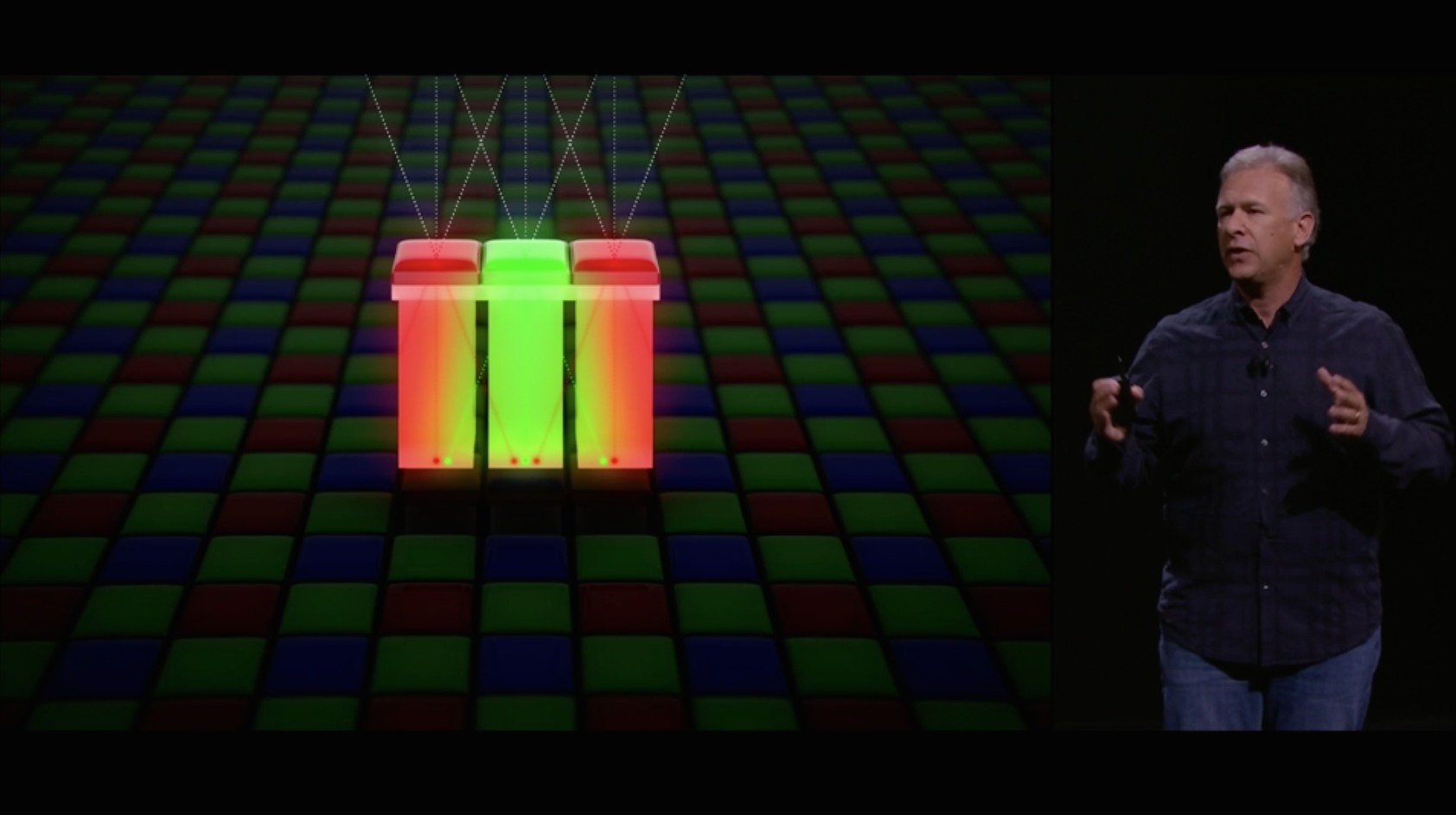 The front-facing FaceTime camera now captures 5 megapixels of image data, and using the camera for selfies is improved by what Apple is calling Retina Flash: the entire screen lights up to illuminate your face (it sounds simple, but Apple developed a special chip just to control this function), and the feature uses Apple’s True Tone flash technology (also found on the back-facing flash) to determine the best color temperature.

Those are all interesting improvements, but a feature that is truly unique to the iPhone 6s is Live Photos. When you take a photo, the iPhone actually records 1.5 seconds of stills before and after the moment when you trigger the shutter. Put together as a Live Photo, the effect is like watching a mini video of that moment (sort of like the magic photos in the Harry Potter series). Live Photos is enabled by default, and a yellow “Live” indicator appears when you’re capturing a shot. Press the photo while reviewing it to view the live version. (Check out Apple’s demos — you have to see it to believe it.)

Video is dramatically enhanced in the iPhone 6s and iPhone 6s Plus, with the capability to record clips in 4K resolution — that’s 3840 by 2160 pixels, compared to the previous 1080p HD video captured by the iPhone 6 at 1920 by 1080 pixels. Apple offers a sample download of 4K footage at the bottom of its iPhone 6s Cameras page so you can see it for yourself. iMovie supports playing and editing that 4K video.

Internal Affairs — The new iPhones feature improved internal components, which are great to highlight during a product introduction but aren’t as important on their own to consumers considering the devices. For most people, things are just better and faster. But the changes are important to note.

The iPhone 6s and 6s Plus are powered by a new 64-bit A9 processor, which is supplemented by an M9 motion coprocessor, now embedded into the A9 instead of operating as a separate chip so it can run all the time. According to Apple, the CPU is 70 percent faster than the A8 chip and graphics processing is 90 percent faster.

The Touch ID sensor is now twice as responsive as those found on the previous iPhone 6 and iPhone 5s models so there should be less of a pause before it recognizes your fingerprint.

Apple says the iPhone 6s is up to twice as fast when connected via Wi-Fi. Also improved is the cellular networking, which Apple calls LTE Advanced, offering up to twice the throughput over 23 bands for better worldwide roaming.

All of this comes in the same shell as the iPhone 6, although with the additional option of a rose gold-tinted aluminum case. Although no one from TidBITS was on hand for the event, I suspect the case is still as slick as last year’s model — as in, it’s hard to hold onto. I’m enamored with the look of the design, but it’s the first iPhone that I keep in a case because it’s not grippy enough on its own.

Oh, and taking a cue from the Apple Watch, Siri on the iPhone 6s and iPhone 6s Plus can be invoked by saying “Hey Siri” at any time, instead of just when the iPhone is plugged into power.

iPhone Upgrade Program — Prices for the iPhone 6s models are a little more complicated this year due to the way cellular providers have recently adjusted their business models. Let’s start with configurations and full prices. Amazingly, both phones still start in 16 GB capacities (see “Why Apple Kept the 16 GB iPhone in Favor of 32 GB,” 24 September 2014), with a 64 GB middle ground and 128 GB high-end option. The prices to own the models outright, with no contract, are as follows:

Providers generally offer their own installment programs, such as AT&T Next, or they subsidize payments with a low up-front cost and 2-year contract. For more details on how these plans work now, see “Comparing U.S. iPhone Plan Costs in a Contract-Free World” (11 September 2015).

Apple, however, is introducing the iPhone Upgrade Program, available directly from Apple only, that lets you upgrade to a new iPhone every 12 months, with monthly costs ranging from about $32–$40 (iPhone 6s) or $37–$45 (iPhone 6s Plus). AppleCare+, which costs $129 for the new iPhones if purchased separately, is included in the price, presumably because turning in an undamaged iPhone will be necessary to upgrade. iPhones acquired through the program are unlocked, and can be set up with any carrier.

The iPhone 6s and iPhone 6s Plus were a sure bet at this year’s announcement. As Apple’s top source of income, the iPhone is without a doubt the company’s most important product. And although these updates are in line with what we would expect — faster, better, some differentiation with the addition of the rose gold aluminum case — Apple knows it can’t sit still or just offer speed bumps. 3D Touch, dramatically improved cameras, and software features like Live Photos that take advantage of the hardware, not to mention the iPhone Upgrade Program, all make an argument for moving to these new devices. That’s not necessary for everyone, particularly those with an iPhone 6 or 6 Plus now, of course, but it is compelling to
millions of people who have an older phone and want to stay on top of Apple’s latest technologies.

Comments About iPhone 6s and iPhone 6s Plus Get Touchy Feely