It’s coming, for real. The long-rumored, much-speculated Apple TV is officially on its way (for my past predictions, and to taste my claim chowder, see “Finding Clues to the Next Apple TV in iOS 9,” 6 July 2015 and “The Future of Apple TV,” 21 February 2014). Arriving in late October 2015 for $149 (for the 32 GB version) and $199 (for the 64 GB version), the fourth-generation Apple TV has improved hardware, a new touch- and Siri-enabled remote, a new iOS-based tvOS that runs apps, and its own App Store.

Check out the demo video.

“Our vision is simple, and perhaps a little provocative: the future of television is apps,” Apple CEO Tim Cook proclaimed. (Though maybe not that provocative: Amazon, Microsoft, Roku, and Sony have been doing TV apps for years.)

Let’s start with the new Apple TV hardware. At 1.3 inches (33 mm) tall, the new box (yes, it’s still a black box) is a bit thicker than the second- and third-generation models, and omits the optical audio port found in those models. The new Apple TV has four ports in the back: power, HDMI, and 10/100 Ethernet, plus a USB-C port for diagnostics and support. Inside is the A8 processor found in the iPhone 6, 2 GB of RAM, 802.11ac Wi-Fi with MIMO, and Bluetooth 4.0. The new Apple TV does not support 4K resolutions, but it does do 1080p at 60 frames per second. 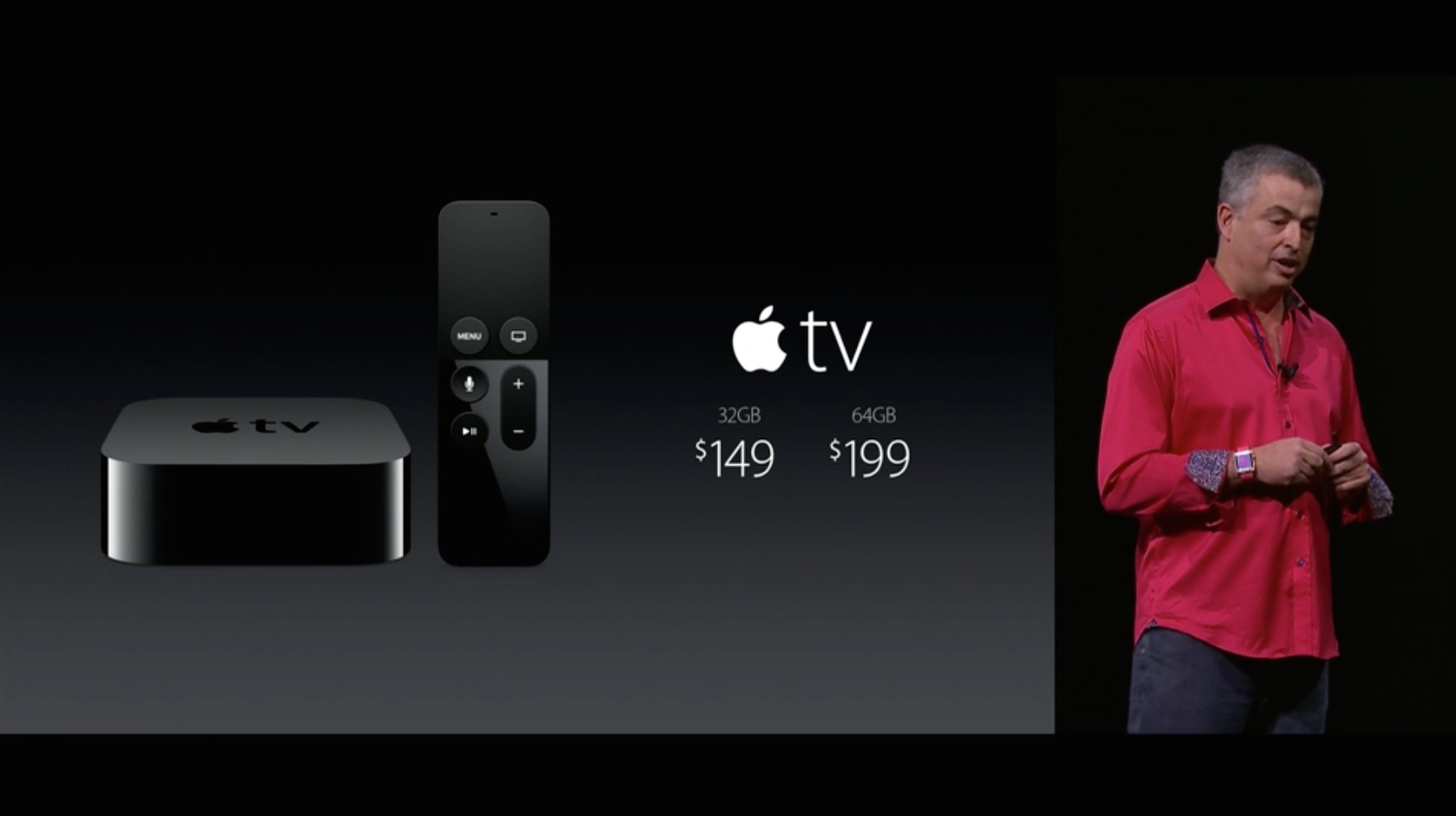 More impressive is the new Siri Remote, which is a reimagining of the previous Apple Remote. It features dual Siri microphones, a glass touch surface, Menu and Home buttons, a new Siri button to activate Siri voice control, and even volume buttons to control your TV or receiver’s volume. Also built in are Bluetooth 4.0, an IR transmitter, an accelerometer and gyroscope, and a rechargeable battery. The Siri Remote uses a Lightning connector for recharging, but you shouldn’t have to do that often: Apple claims that the Siri Remote can last for
3 months on a single charge!

tvOS — Based on iOS 9, but, as Apple’s Eddy Cue put it, “designed for the living room,” the new tvOS doesn’t look all that different from what Apple TV users are already accustomed to, though there are now neat parallax animations for icons. Behind the main menu facade are redesigned versions of all of the existing Apple TV apps. 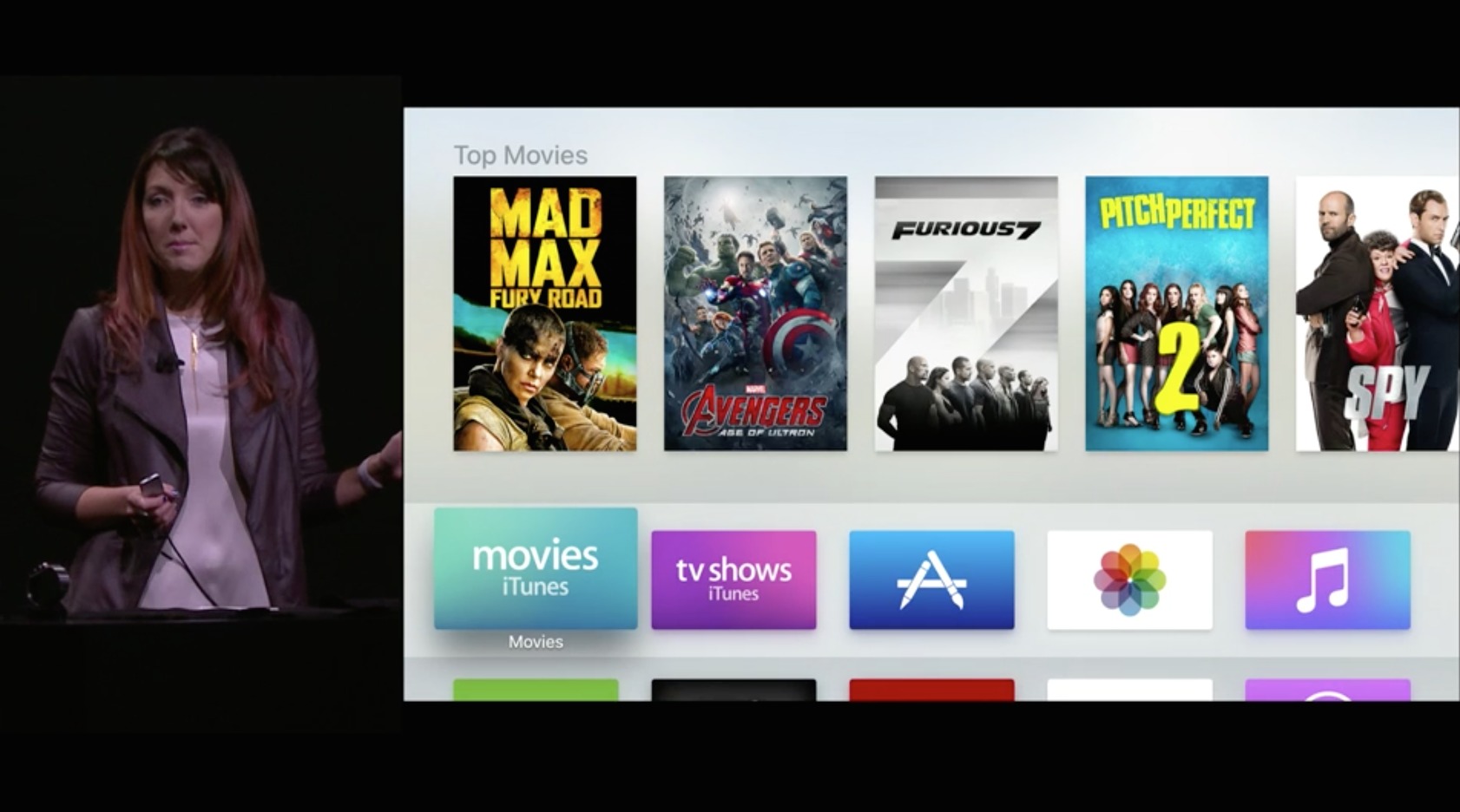 The Apple TV’s interface has been retooled for the new touch surface on the remote and for Siri, enabling you to rewind and fast-forward with swipes on the touch surface instead of with presses on the previous remote’s directional ring.

Siri on the Apple TV looks as though it will be even more impressive than I had imagined. Of course you’ll be able to open apps with Siri, but you can also search for movies and shows by name, director, actor, or even age rating. And that search is supposed to work not only with iTunes content, but also with Netflix, Hulu, HBO, and Showtime, with support for more services on the way.

With Siri, you will be able to narrow down a search like this: First say, “Show me some movies,” then “Show me some James Bond movies,” and finally, “Just the Sean Connery ones.” You can even ask Siri stuff like, “What are some good movies to watch with kids?”

You can ask Siri for information about a video as you watch it, and you can even ask for a weather forecast, which will be displayed on the screen underneath the video. You can then swipe up to pause playback and see the full weather forecast. 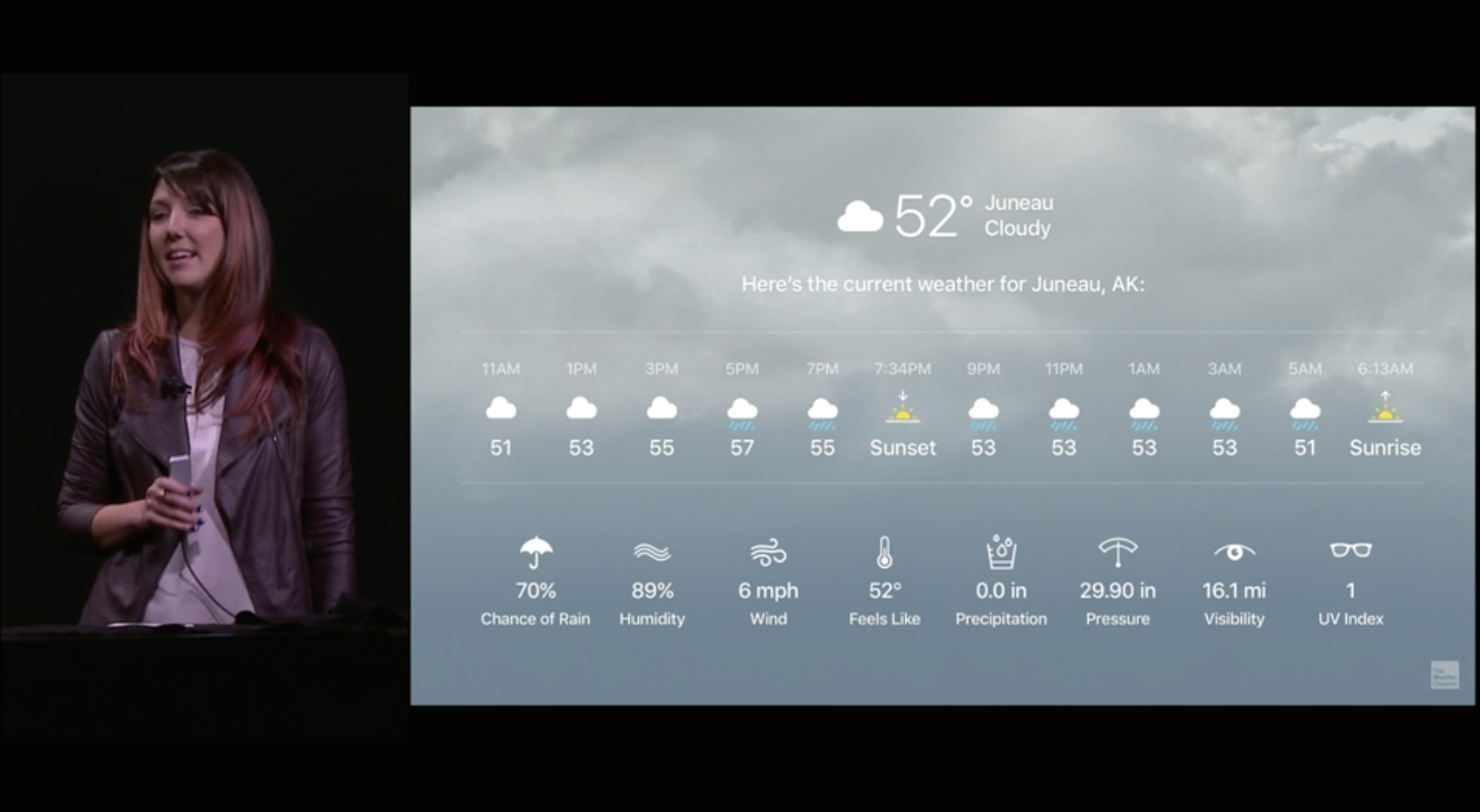 The new Apple TV interface also includes high-definition slow-motion video screensavers, shot exclusively for the new device. These screensavers have day and night scenes, and display based on the time of day. Of course, Apple Music and iCloud Photo Library will (finally) be supported by the new Apple TV.

OK, you’ve been patient. It’s time to talk about what you’ve been champing at the bit for: the apps.

Please, Tell Me about the Apps! — As I said, the new Apple TV will have an App Store, and developers can sign up for the software development kit now. tvOS won’t run iOS apps directly, but developers can offer a universal purchase, so if you buy an app on your iPhone, you may also receive the equivalent Apple TV app.

Gaming is the obvious play here, and Apple had a number of games to show off, including a version of Hipster Whale’s Crossy Road with a new multiplayer mode, a racing game, Rock Band, a new Harmonix musical baseball game called Beat Sports, Rayman Adventures, Disney Infinity, and Zola — a new fitness game that works with your Apple Watch. 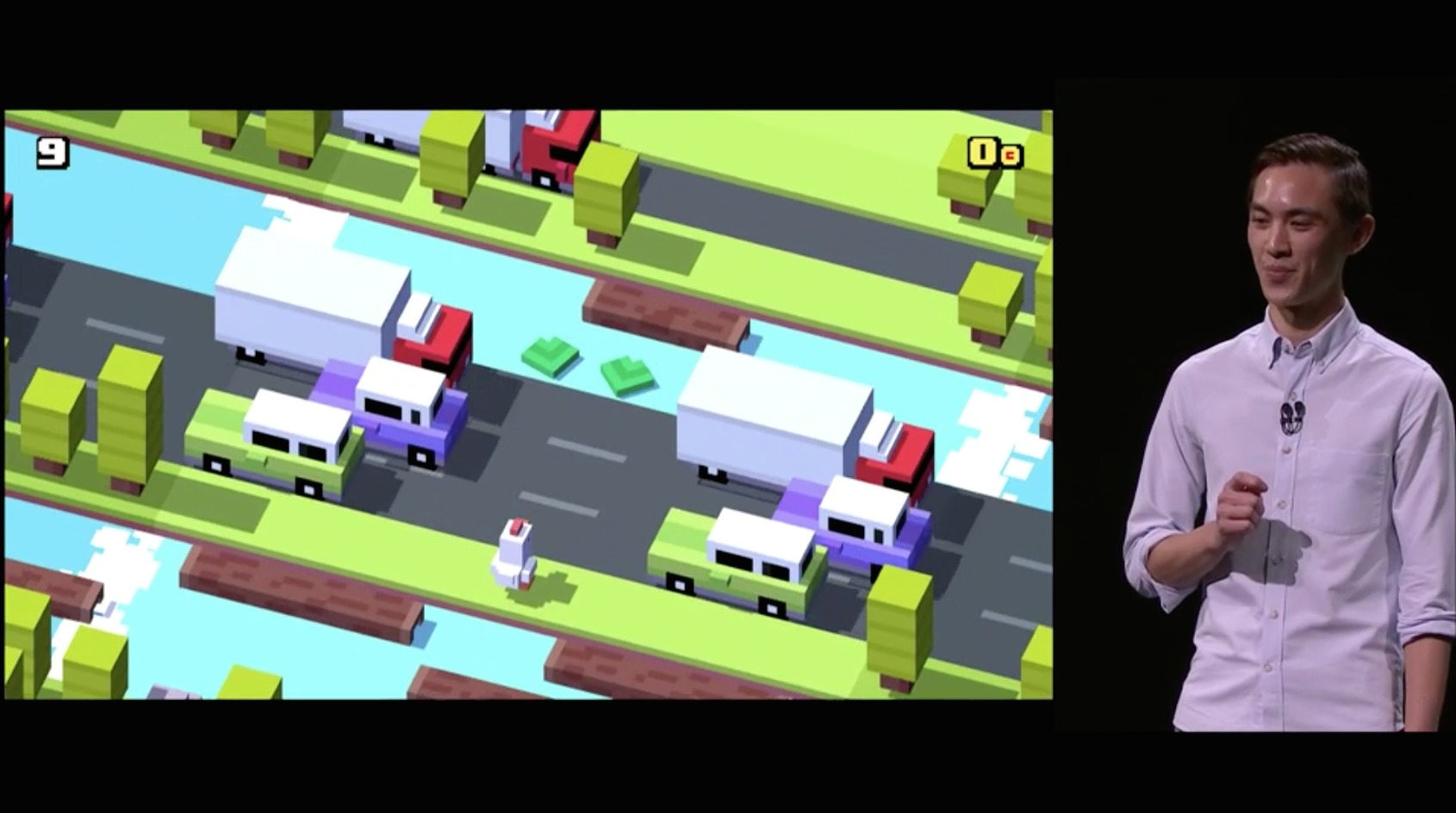 Developer documents indicate that the new Apple TV will support third-party game controllers, but if you’re looking at the Apple TV as a replacement for an Xbox or Playstation, you’ll likely be disappointed. Most games will likely be built with the Siri Remote in mind, and will thus be designed around motion and touch input. Multiplayer games, like Crossy Road, can use an iOS device as an additional controller.

There has been some confusion over how large Apple TV apps can be. The initial install size is capped at 200 MB, which isn’t much, but as iMore’s Serenity Caldwell explained, apps can later download an additional 2 GB of data, with up to an extra 20 GB of resources stored in iCloud. Apps can flush unneeded content as you use the app, like the early levels of a game, so Apple TV app storage should be efficient. By comparison, Playstation 4 games are sized anywhere between 1 GB and 50 GB.

But Apple TV apps won’t just be games. As always, Major League Baseball offers an impressive app that shows current game stats and highlights. Furthermore the new MLB app can notify you of upcoming games and plays, and even lets you watch two games live side by side. 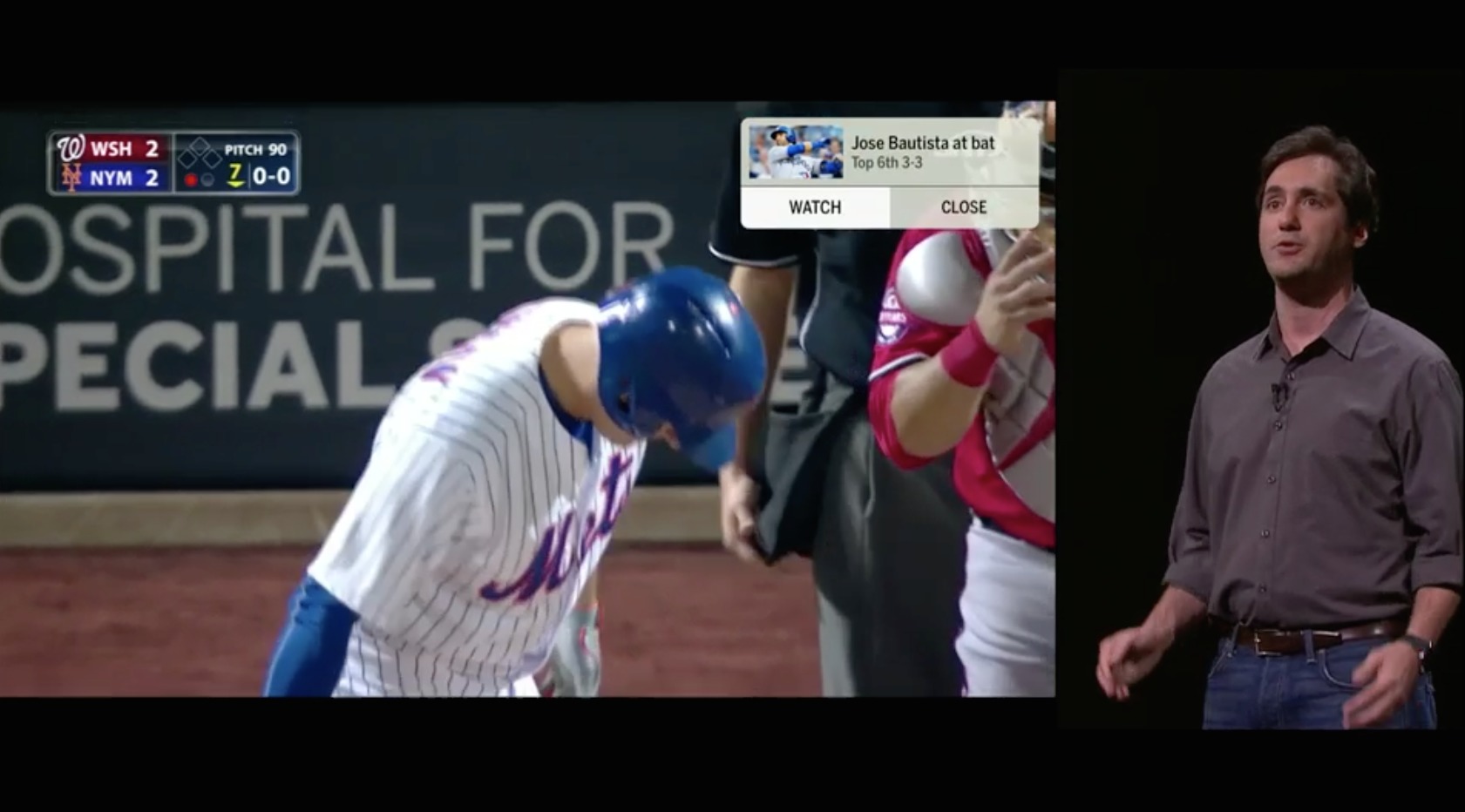 Perhaps most surprising, the Apple TV will have more traditional apps as well. Accommodation sharing site Airbnb, real-estate service Zillow, designer shopping site Gilt, and even the Madefire comic reader will be coming to Apple TV. Not only will you be able to watch video and play games in your living room, but you’ll be able to shop and read comic books too. 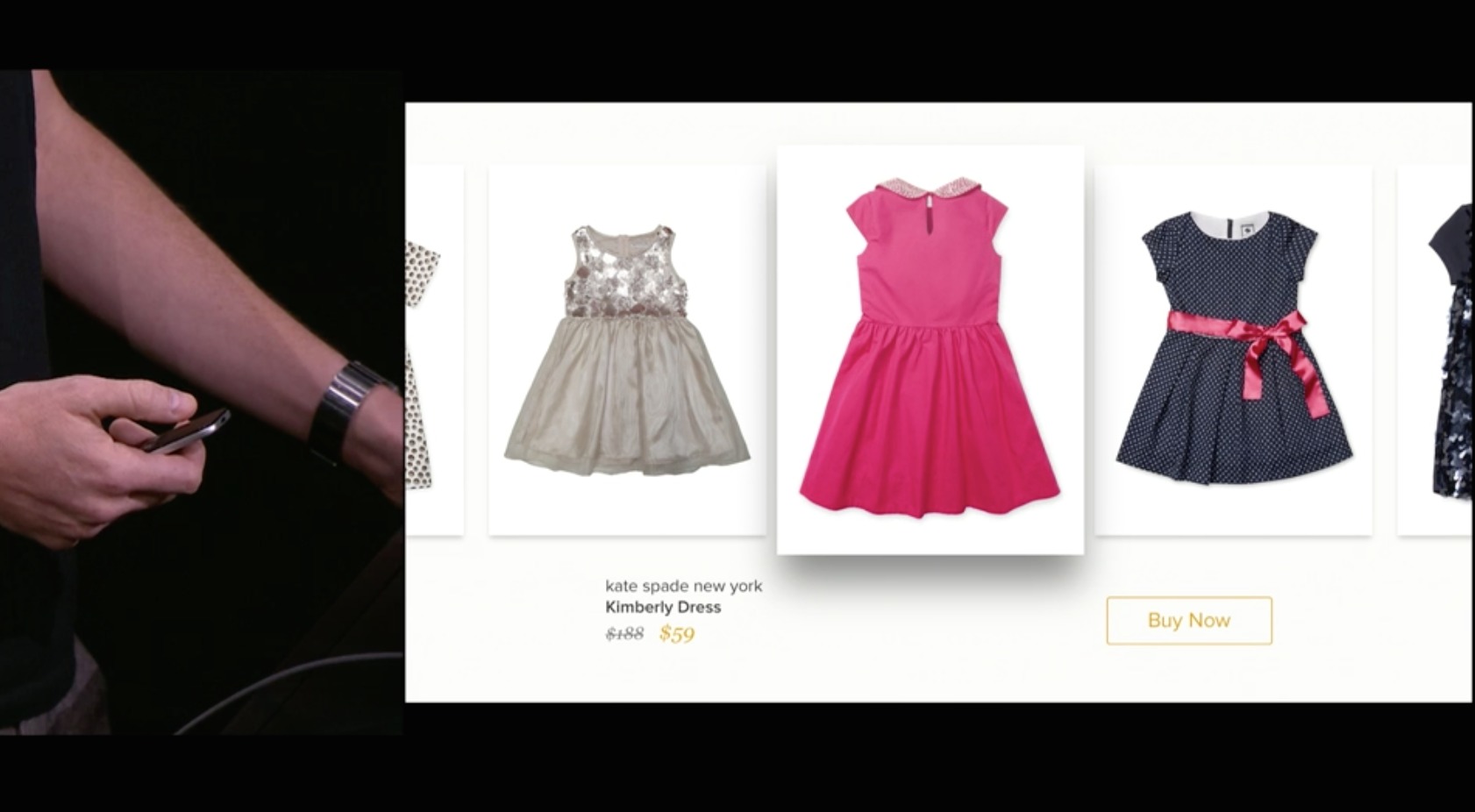 Unanswered Questions — For all the cool things Apple showed off, there are still many unanswered questions about the Apple TV.

First, no new content service was mentioned. Rumor has it that Apple has been working on deals to start its own live TV service, or even a Netflix competitor. If that’s the case, Apple apparently decided to launch the hardware now, with the new service to arrive later. That also may explain why the new hardware took so long to appear: Apple may have been hoping for content deals that have yet to materialize.

Next is the question about cable authentications. An annoying aspect of using an Apple TV, and one that has become even worse since we published “Take Control of Apple TV,” is the deluge of new apps that require a TV package from a participating satellite or cable provider, with each app requiring an individual authorization. I hope tvOS has a solution for this, even if it’s just a unified authorization panel.

There is also the question of which Apple TV model to buy: 32 GB or 64 GB? With apps able to use only 2.2 GB of storage at once (at most), that means you could hold up to 14 of those apps at the 32 GB level, though we doubt most apps will occupy even a fraction of that. The 64 GB model could hold 28 of those mega apps, so that may be a better choice if you plan on doing a lot of gaming with the Apple TV. However, most users will probably be fine with 32 GB. But since many app resources are streamed from iCloud, we wonder what will happen if you experience an Internet or iCloud service slowdown or interruption?

Apple also said that the third-generation Apple TV will stick around at $69. But in what capacity? Will it receive an update to tvOS or will it maintain its existing software? And if it does see the tvOS update, what features will it support? The third-generation Apple TV features an A5 processor, 512 MB of RAM, and 8 GB of flash storage; that’s a far cry from the fourth-generation model’s A8, 2 GB of RAM, and 32 or 64 GB of storage. (In the iPhone world, the A5 was last used in the iPhone 4S, which is the oldest device to support iOS 9.)

It remains to be seen how exactly the new Apple TV will measure up to the third-generation model and to competitors like the Amazon Fire TV and Roku. I think it will be an easy upgrade for third-generation Apple TV owners, except for the most budget conscious. The value is more questionable for Fire TV and Roku owners. If you’re tied to the Amazon ecosystem, I still think the Fire TV makes the most sense, but if you lean toward Fire TV or Roku for their numerous content options, you’ll have to wait to see if the apps you want arrive on the new Apple TV. But if you like the Fire TV for its speed, interface, and voice search, it looks like the new Apple TV will be leaps and bounds ahead on all those fronts.

In any case, it’s impossible to complain. This fourth-generation Apple TV was long overdue, but what Apple has shown is impressive. Its Siri capabilities alone look as though they’ll blow the competition out of the water. I can’t wait to get my hands on the new Apple TV and start updating “Take Control of Apple TV.”

Comments About The Fourth-Generation Apple TV Is Coming at Last