Now you can buy tablets in six-packs just like soda – and you even get the little cardboard carrier.

The tablet in question is Amazon’s new Fire, which at about $50 is so affordable that it can be bought in bulk — pay for five, get a sixth free — for less than the price of a single iPad mini 2.

The cheap Fire is among a number of products Amazon announced in its ongoing bid to be an alternative to Apple in the tablet and video-player markets. (Amazon has thus far failed in the smartphone market, having yanked its poor-selling Fire Phone without announcing a replacement — see my review, “Amazon Fire Phone Too Limited and Gimmicky,” 25 July 2014).

Pricing on all of this hardware positions Amazon as a budget option compared to Apple, which typically targets the higher end. Amazon also is focused on content consumption (with that content purchased from Amazon, natch), while Apple has lately pushed tablet-based productivity and content creation.

Fire — For $49.99, value-conscious buyers get a 7-inch tablet with a 1.3 GHz quad-core processor, a 1024-by-600 IPS color display, and rugged construction that, Amazon claims, makes the Fire nearly twice as durable as the iPad Air 2 (“as measured in tumble tests,” whatever that means). 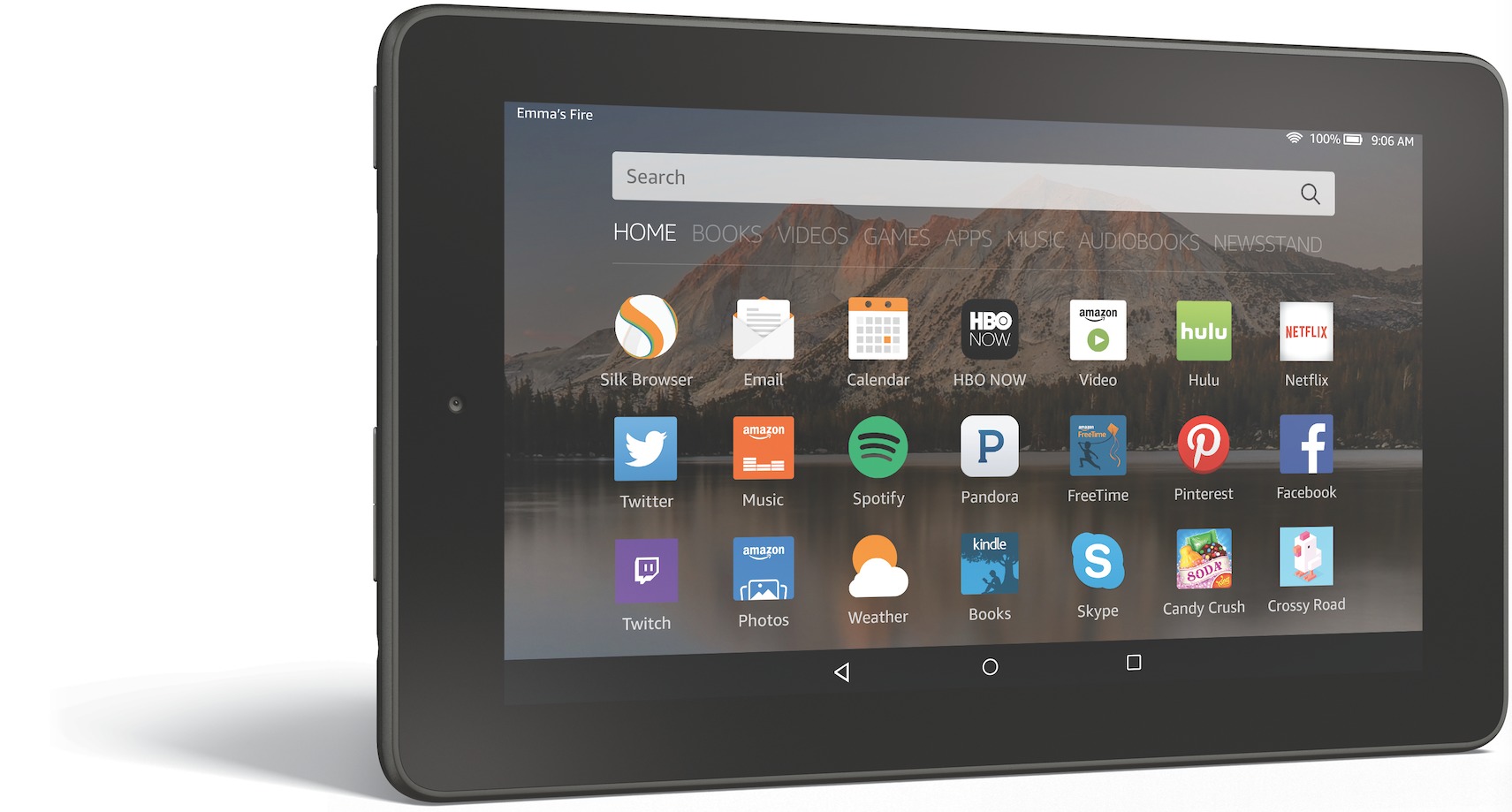 The Fire also has 8 GB of storage (only 5 GB is available to the user, but storage is expandable to 128 GB via microSD card) along with front-facing (VGA quality) and rear-facing (2 megapixel) cameras.

Those choosing the six-pack route pay $250 for a half-dozen Fires tucked into an orange cardboard tote. By comparison, one 7.9-inch iPad mini 2 with 16 GB of storage costs $269. 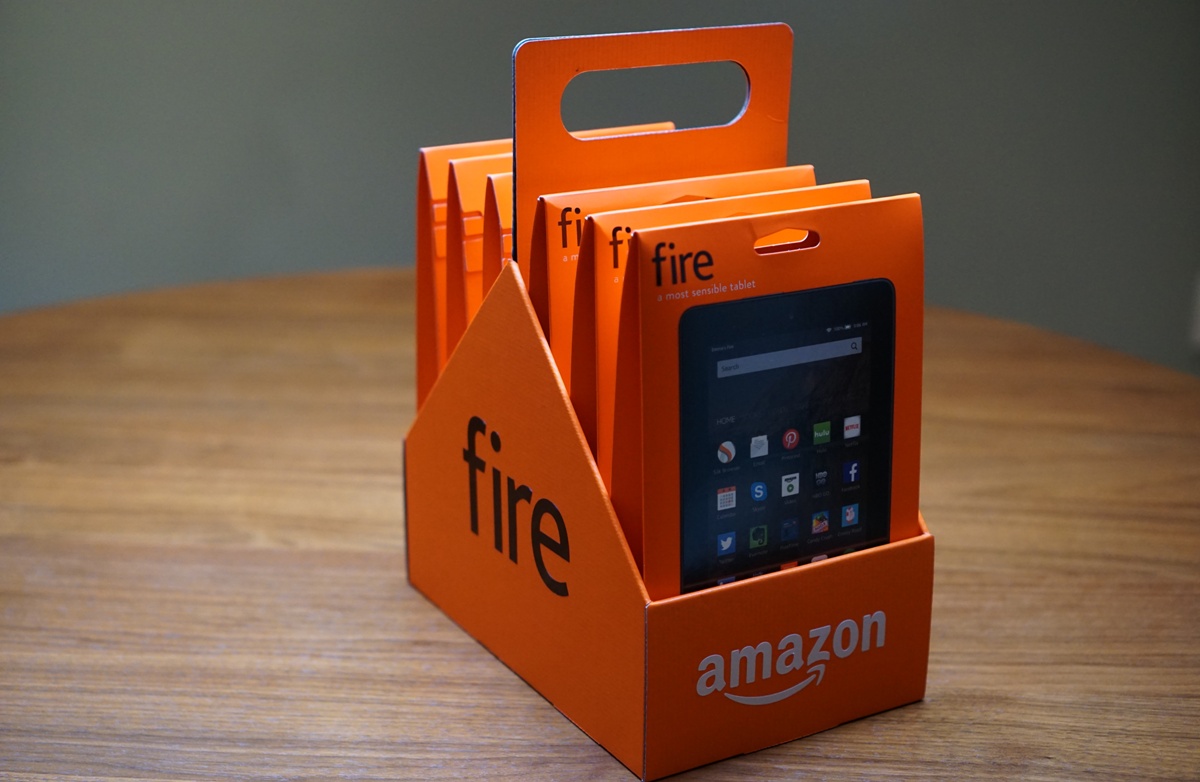 Fire HD 8 and 10 — The “Fire HD” moniker has long referred to Amazon’s high-end tablets with HD touchscreens, and this category just got a refresh.

The new Fire HD tablets are thinner and lighter than their precursors and, like the Fire, are said to be more durable than comparable iPads.

The new tablets are colorful, too. The Fire HD 8 comes in black, magenta, blue, and tangerine, while the Fire HD 10 comes black and white. 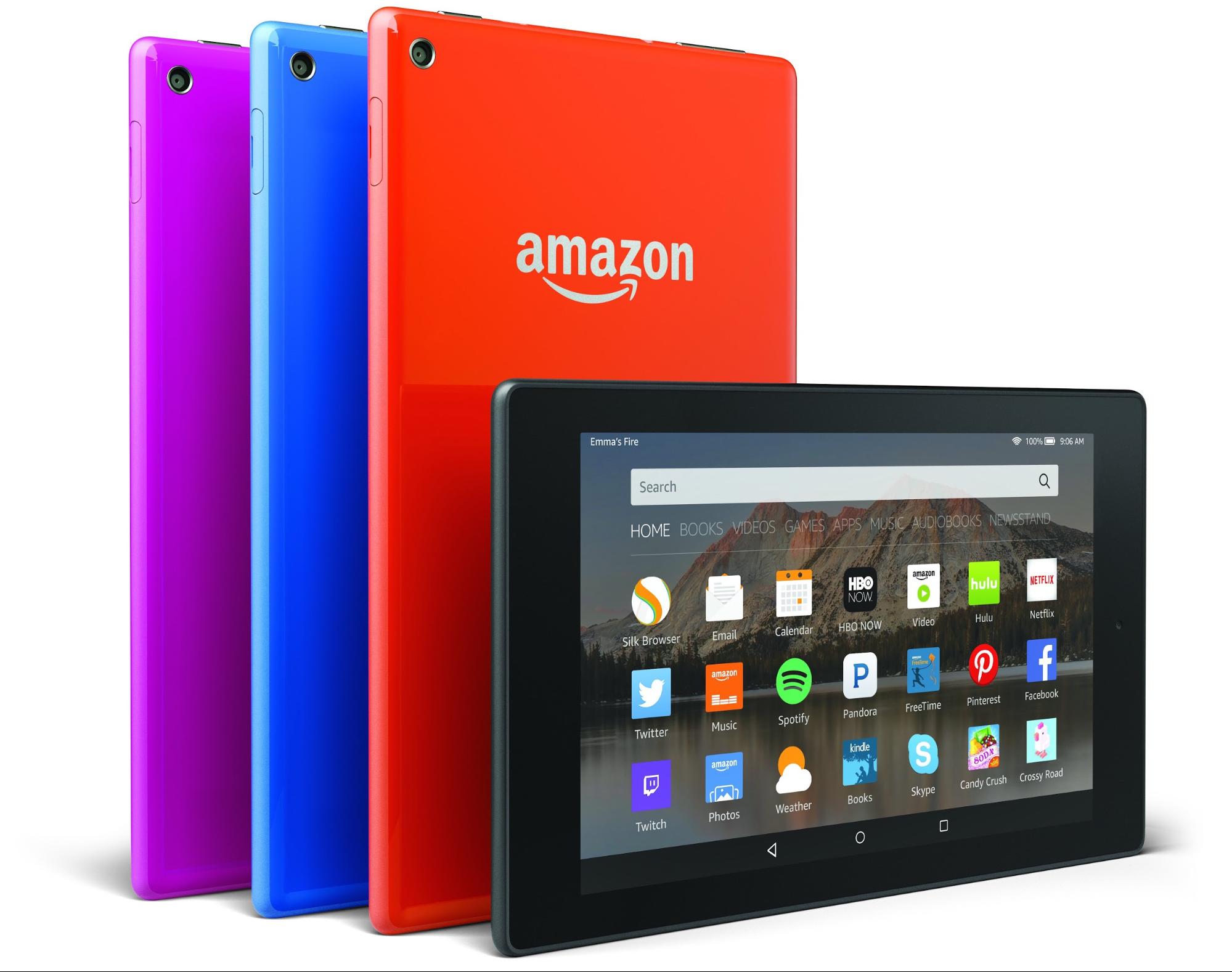 Both new Fire HD tablets have a display resolution of 1280-by-800 along with 1.5 GHz quad-core processors. Boosting the on-board storage the next level ups the cost by $20 and $30, respectively. Storage is further expandable to 128 GB via microSD.

Amazon continues to sell a $99.99 6-inch Fire HD 6 tablet that apparently won’t see an update during this product cycle.

Fire Kids Edition — For $99.99, parents can buy a child-friendly tablet with a large blue or purple bumper along with built-in parental controls. 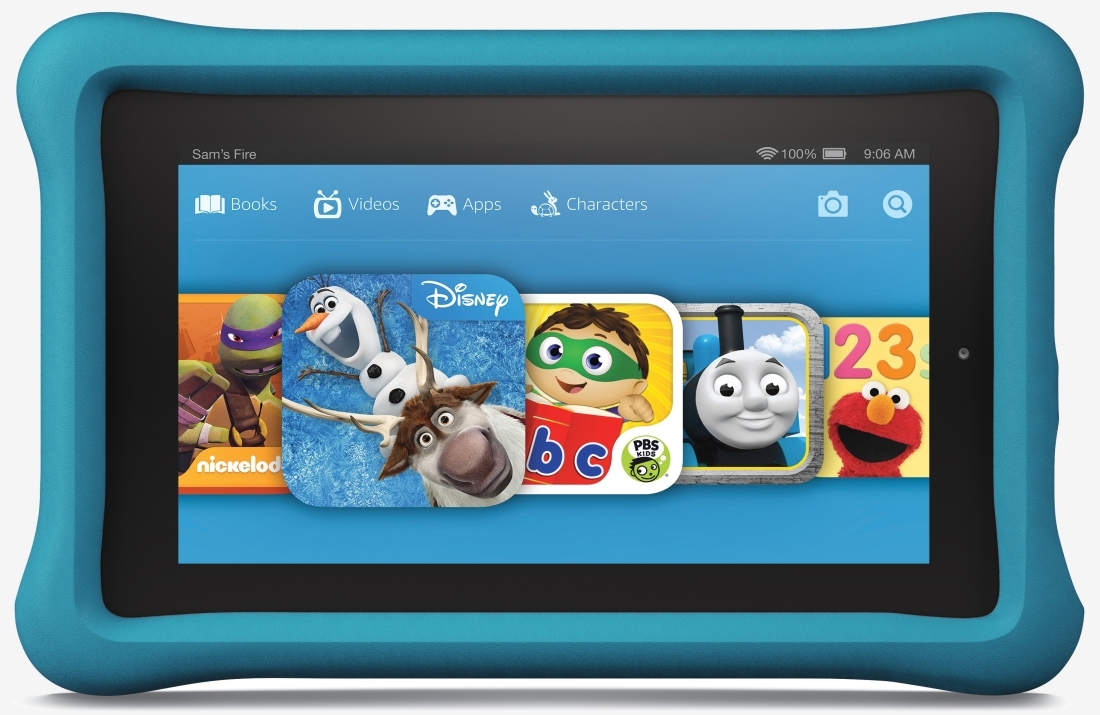 They also get a 2-year accidental-damage replacement guarantee, and a year of free access to Amazon’s Kindle FreeTime Unlimited service that offers 8,000 kid-friendly videos, books, games and educational apps. Normally, the service starts at $2.99 per month for Amazon Prime members with one child; it maxes out at $9.99 per month for four children (and no Amazon Prime membership).

The 7-inch Fire Kids Edition tablet is otherwise comparable to the 7-inch, $50 Fire with a 1.3 GHz quad-core processor, 1024-by-600 touchscreen, front- and rear-facing cameras, and 8 GB of storage (again, only 5 GB is available to the user). This begs the question for some, why not buy a identically specced Fire at half the cost, and put it in a protective case?

Amazon Underground — The Fire tablets for adults include a service called Amazon Underground, which offers free access to what Amazon claims is more than $10,000 in paid apps, games and in-app purchases.

Amazon Underground is part of Amazon’s emphasis on content consumption, with the use of its tablets for reading, watching, and playing. The company also sells tablet keyboards for productivity, but downplays this aspect.

That is in sharp contrast to Apple, which recently made tablet-based productivity an emphasis during its debut of the jumbo iPad Pro (see “iPad Pro with Smart Keyboard and Apple Pencil Announced,” 9 September 2015), and updated its iOS 9 operating system with worker-friendly features like Split Screen and trackpad-like cursor positioning.

You might wonder why app developers would sign up for Amazon Underground. They’re not doing it for free — Amazon will pay a developer based on the amount of time that developer’s app is used. The rate is $0.0020 per minute (that’s two-tenths of a cent), which means a penny per five minutes, or 12 cents per hour. For a game that would otherwise sell for $0.99, the developer will have to entice you to play for 8.25 hours.

Fire TV with 4K Last year’s Fire TV streaming device introduced a remote with an integrated microphone for simple voice search (see our coverage in “Fire Watch with Me: Amazon Fire TV vs. Apple TV,” 13 May 2014).

Now Amazon is upping the ante with an upgraded box that supports 4K Ultra HD video, along with access to a library of 4K video content. 4K support was notably absent from the Apple TV features trumpeted during Apple’s recent product mega-event (see “The Fourth-Generation Apple TV Is Coming at Last,” 9 September 2015). 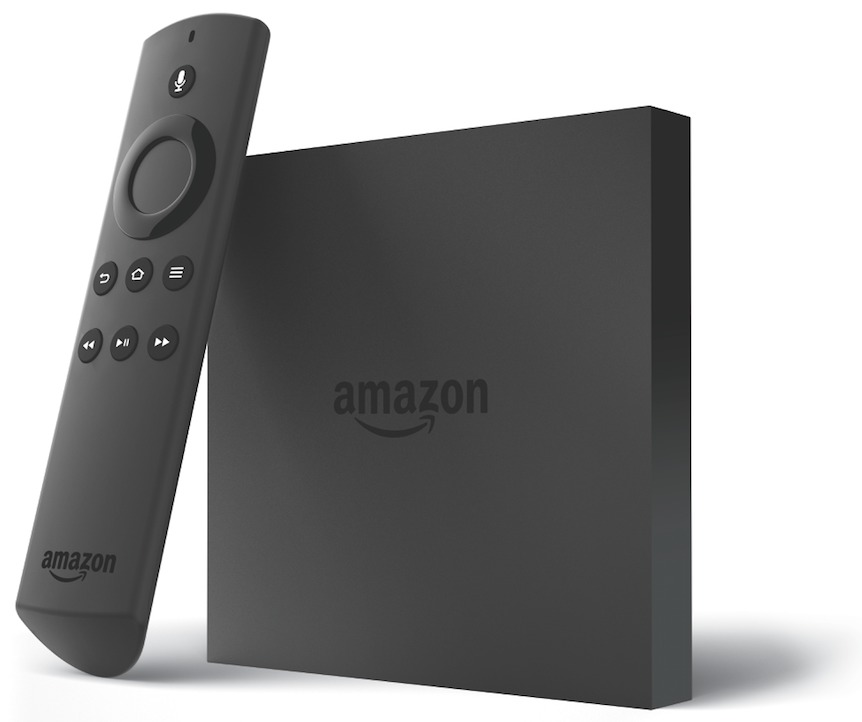 Voice control has been upgraded with access to Alexa, the intelligent assistant that also is available via the Amazon Echo smart speaker. This Amazon move mirrors a recent Apple announcement that Siri will be available via a microphone-equipped remote for the new Apple TV.

The Fire TV has 8 GB of on-board storage, expandable to 128 GB via microSD card, along with a quad-core processor, a dedicated GPU, and support for 802.11ac wireless connectivity. 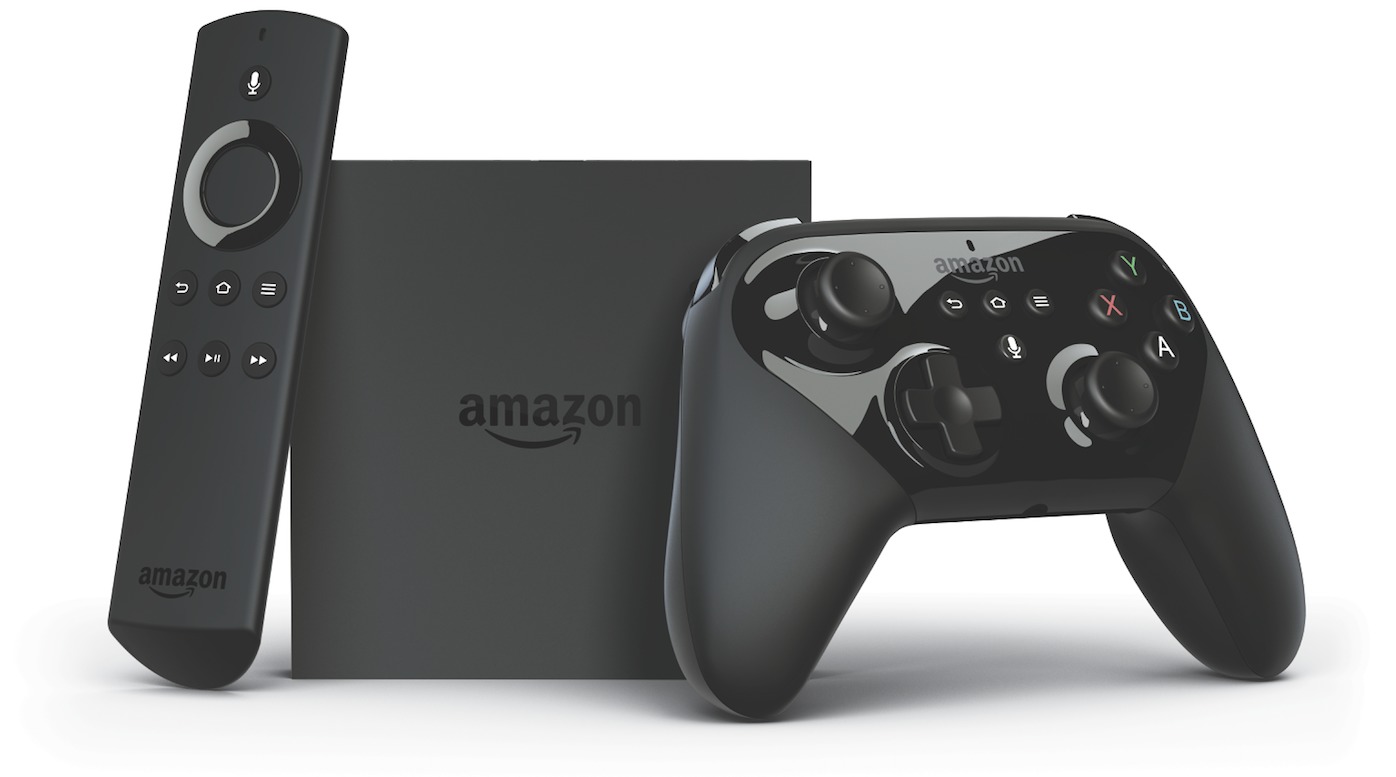 Amazon also is offering an updated version of its Fire TV Stick, a dongle-style device that plugs directly into a TV’s HDMI port. The new Fire TV Stick with Voice Remote is voice-enabled – but apparently not Alexa-enabled. It runs $49.99 and is due 22 October 2015. 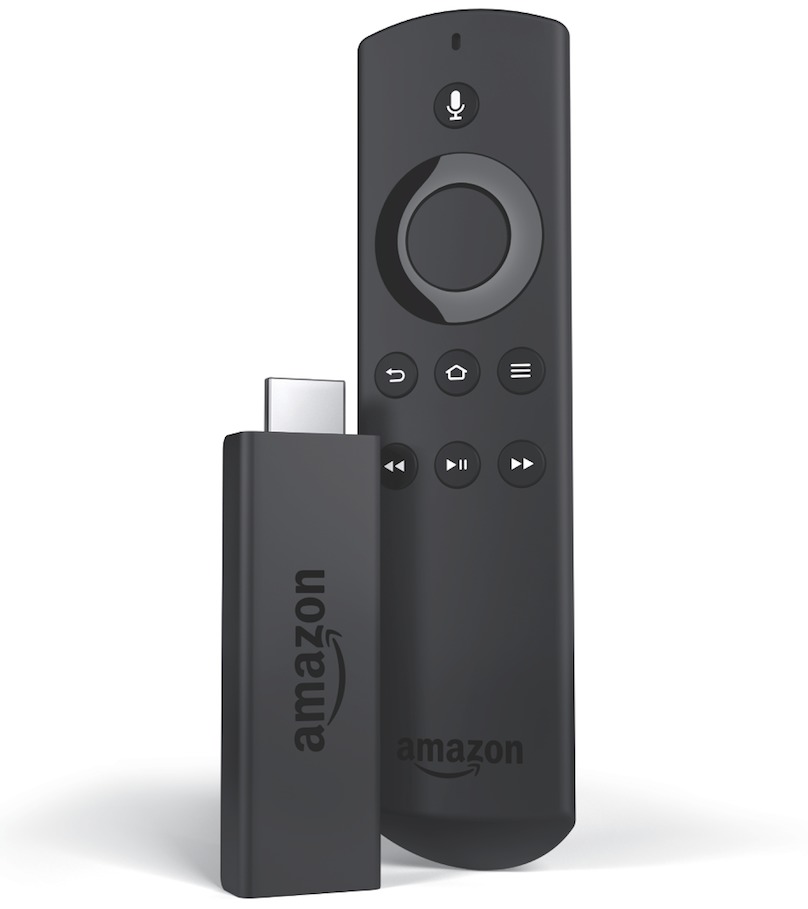 Amazon’s current $39.99 Fire TV Stick (without the Voice Remote) sticks around, just as Apple is continuing to sell its current, long-in-the-tooth Apple TV for $69. The original Fire TV streaming box, however, is listed as unavailable on Amazon.

Although Apple sells exactly the same kinds of content, the contrast with Apple’s approach is stark. Where Apple’s focus has always been on making money through its premium hardware, Amazon sees its less-expensive devices as ways to sell more content and encourage users to shop more generally at Amazon.

Given the rate of technological change, it isn’t hard to see the utility of buying inexpensive hardware and replacing it more frequently, if desired.