The just-released watchOS 2 update now runs native apps on the Apple Watch and lets developers create complications (the additional bits of information that appear on a watch face). It also features Nightstand mode, which makes the watch a tiny bedside clock when it’s charging and placed on its side, and it uses the buttons to snooze alarms. Josh Centers covered these and other marquee features in “Apple Releases watchOS 2,” (21 September 2015).

As with any operating system update, watchOS 2 includes plenty of other smaller details that are worth pointing out. This list isn’t comprehensive, so feel free to share your observations in this article’s comments. I’m also throwing in some observations from watch OS 1.1 that caught my eye and demonstrate Apple’s attention when it comes to making a pleasant user experience.

Light the Screen Longer — When you raise your wrist, the Apple Watch screen comes on and then turns off after 7 seconds. If you tap the screen to wake it up, though, you can now choose to illuminate the pixels longer before it goes black, which makes demoing easier. Open the Settings app on the watch or the Apple Watch app on the iPhone and go to General > Wake Screen. Under On Tap, choose Wake for 15 Seconds or Wake for 70 Seconds. Why 70 seconds? No idea.

The Last Stand (Until Tomorrow) — I like the Apple Watch’s exuberant reminders to get off my tush (“Time to Stand!”), but some days they’re a bit too insistent. Now, when you’re alerted, the reminder includes a Mute for Today button.

Choose Your Own Photo Watch Face — Two new watch faces let you use your own photos as the face (though neither allows complications — really, Apple?) Photo displays the same image every time you raise your watch; Photo Album cycles among the images in an album each time the face appears. Tap the watch face to switch between the images. 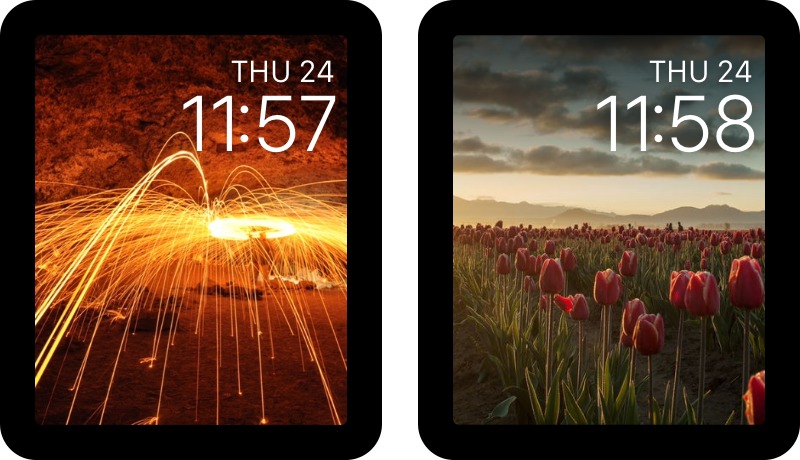 To use a single photo as the watch face, do the following:

Whenever you create a watch face from a different photo, the design is added as a separate watch face, so you can create several and switch between them as the mood strikes.

An album of relatively dark images will work best if you have trouble seeing the white text for the time and date.

Time-lapse Faces Around the Clock — A step up from photo watch faces is the new Time-Lapse face, which plays a short time-lapse movie of one of six locations: Mack Lake, New York, Hong Kong, London, Paris, and Shanghai. (These, too, do not allow any complications. Come on, Apple!)

What you may not notice right away is that Apple has created animations for each location at different times of the day. If you’re checking the time in the morning, you’ll see a daylight animation; in the evening, you get the scene at night.

More Color on the Faces — The Modular watch face offered several monochromatic color schemes under watchOS 1, but now there’s a new Multicolor option that features several colors, including a tri-hued Activity indicator. Many of the colors are new, and match the new Sport bands Apple recently introduced, such as Stone, Walnut, and Vintage Rose. When you’re choosing watch faces (force-touch the screen at the clock), switch to the Modular face and tap Customize. The first configuration screen chooses color; turn the Digital Crown to switch between hues.

Come Fly with Me — Speaking of faces, here’s a detail that also appeared in watchOS 1 that shows a level of fit and finish that adds, even imperceptibly, to the overall experience. When you switch to Airplane mode (from the Settings glance), you’ll see a tiny orange airplane icon at the top of the screen to indicate the mode. Afterwards, when you check the time from a darkened screen, the airplane quickly flies in from the left.

Start Exercising Faster with Siri — Your laces are tied, your tunes are rockin’, the road stretches out before you, ready to be conquered, and… hang on, you need to open the Workout app, then tap the Outdoor Run option, set a goal, tap Start, and… oh heck, maybe you should check your email instead, and there’s a fresh carton of ice cream in the freezer…

Is this your approach to working out with the Apple Watch? Since the desire for exercise doesn’t come naturally to me, the more impediments to getting started, the more difficult it is for me to actually do it.

In watchOS 2, Siri has made that much easier: press and hold the Digital Crown, or raise your wrist and say, “Hey Siri” to activate the assistant, and then say, “Start an Outdoor Run” (or whichever workout applies). The watch opens the Workout app, switches to the correct type of exercise, and starts you on your way.

Add Friends on the Watch — Pressing the side button brings up your circle of friends, and in watchOS 2 you can have several circles — swipe left and right between them. What’s also nice is that you can select a friend from your contacts directly on the watch, without going to the Watch app on your iPhone. Position the selector on an empty spot and tap the middle button (which displays a +), and then scroll to find the friend you want to add. You still need to use the iPhone app to remove or re-order friends, however.

What other details and additions have you found in watchOS 2? On the surface it feels like Apple has brought the watch up to the cruising speed it originally intended for the first iteration of the Apple Watch, but when you dig down and pay attention, there’s more to be discovered.