Hot on the heels of the iOS 9.0.1 update (see “Apple Fixes Slide to Upgrade Bug in iOS 9.0.1 ,” 23 September 2015), Apple has released iOS 9.0.2 with more bug fixes. You can download the update via Settings > General > Software Update, or through iTunes. For those who have successfully updated to iOS 9.0.1 already, it’s a 66 MB download on the iPhone 6 and under 50 MB on the iPad Air 1 and iPad Air 2, so it’s probably easiest to update over the air, rather than via iTunes. 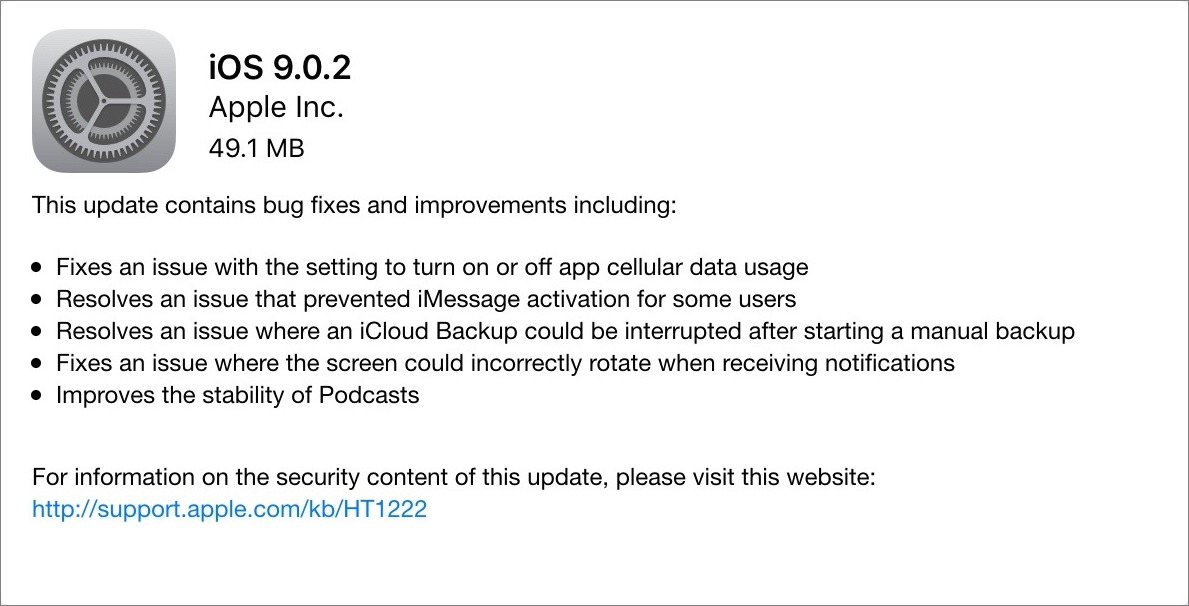 The main fix is for “an issue with the setting to turn on or off app cellular data usage.” This may have been the bug behind excessive cellular data usage in iOS 9, which had previously been pinned on the new Wi-Fi Assist feature that automatically uses cellular data when Wi-Fi connectivity is poor. The Wi-Fi Assist setting is located at the very bottom of Settings > Cellular, if you want to turn it off; for some
misguided reason, it’s on by default. (Apple engineers must not have to worry about data overages.)

iOS 9.0.2 also fixes a bug that prevented iMessage activation for some users, an issue where iCloud Backup could be interrupted after starting a manual backup, and a problem that caused the screen to rotate incorrectly when receiving notifications.

Apple also claims that the Podcasts app is more stable in iOS 9.0.2. Hopefully, this will fix the issue that prevented the skip buttons from appearing (see “iOS 9: TidBITS Answers Your Questions,” 16 September 2015). I was able to fix this on my iPhone by performing a clean install of iOS 9.

iOS 9.0.2 features one security fix that keeps someone with physical access to your device from accessing your photos and contacts from the Lock screen.

Many users updating to iOS 9.0.1 saw a quirk where recently updated apps had to be updated again. iOS 9.0.2 doesn’t seem to share this oddity. However, some apps may update soon, because iOS 9.0.2 adds App Slicing, which had been previously withheld from iOS 9 due to a bug. App Slicing allows developers to set up their apps so end users only download the part of the app specific to their device, reducing installation sizes.

In general, iOS 9.0.2 seems like a worthy update, particularly for iPhone users who might worry about excessive cellular data usage. We haven’t seen any reports of problems with it yet, but it’s probably worth waiting a day or two if you don’t need any of the specific fixes right away.

It is a little troubling to see two updates to iOS 9 in quick succession, which implies that Apple’s testing — even with the public beta — wasn’t sufficient to identify these bugs ahead of time. Since it seems unlikely that Apple will slow down the annual update cycle in the face of competition from Android, we may have to get used to more small updates.