When Apple released iOS 5 in 2011, Newsstand was a new hope for publishers. Most notably, it inspired two new digital publications: News Corp’s big-budget The Daily (see “Why The Daily Is So Yesterday,” 3 February 2011) and Marco Arment’s minimalist The Magazine (the latter of which was purchased by our own Glenn Fleishman, see “Glenn Fleishman Buys The Magazine from Marco Arment,” 29 May 2013). But despite taking radically different approaches, both failed within a few years.

Instead of being salvation for publishers, Newsstand quickly became a prison. Publishers had to become (or hire) developers in order to participate in Newsstand — an expensive proposition, and not something most publishers are good at. Once an app was locked into Newsstand, there was no easy way to break out (see “How iOS 7’s Newsstand Hurts Publishers,” 15 October 2013). And Newsstand’s hybrid design — half app, half folder — was off-putting for users. You couldn’t move a Newsstand publication app to your home screen, because it was forever trapped in that weird mutant folder, so many Newsstand publications were forgotten by readers. Out of sight, out of mind.

Apple has at last come to its senses in iOS 9, turning Newsstand into a simple News folder from which previously captive publication apps can finally escape.

Apple hasn’t given up on periodicals, though, and is taking a different approach in iOS 9 with News, which acts more like a traditional RSS reader, pulling articles directly from publisher feeds (which are far easier to maintain than entire apps) and displaying them in a consistent format (while still allowing some large publishers to tweak the look slightly). With potentially hundreds of millions of users, News could have a significant impact on the world of online journalism. To start, Apple is testing a proprietary Apple News Format with select publishers, and Wired is experimenting with publishing articles to Apple News first.
Apple is also hiring journalists to edit Apple News, pointing at bigger things ahead.

But in the here and now, here’s how to set up and use Apple News.

Perusing the Shelves — When you first launch Apple News, it gives you an endless choice of channels (like TidBITS) and topics (like Apple TV) to subscribe to. Tap one to select or unselect it, and tap Continue when you’re finished. 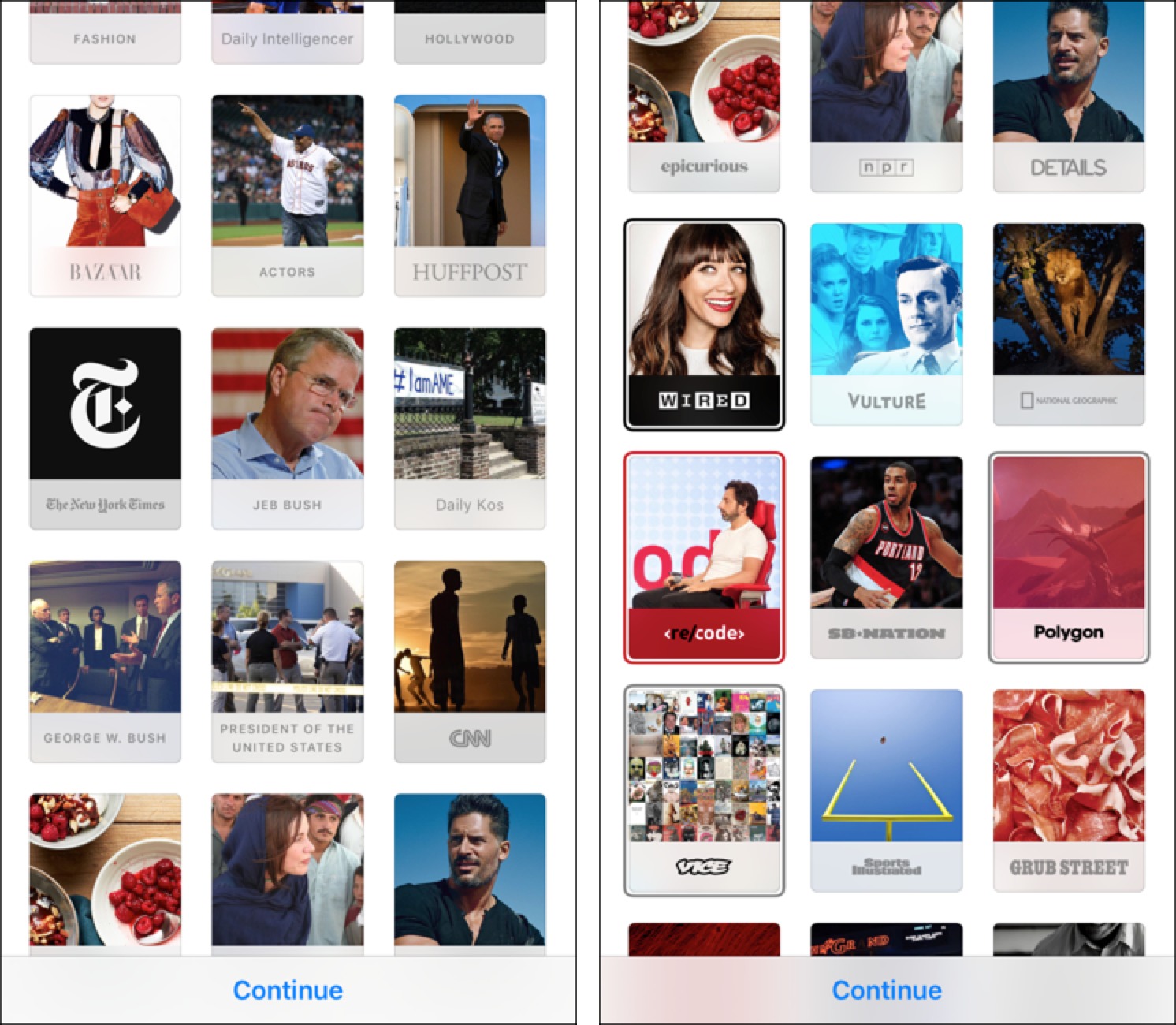 Oddly, Apple isn’t allowing people outside of the United States to access Apple News at the moment, which makes no sense. Luckily, there’s a simple workaround: go to Settings > General > Language and Region and change Region to United States.

After Apple News is set up, you find the channels and topics that you’ve subscribed to in the Favorites tab. Tapping Edit in that pane lets you delete favorites you no longer want. 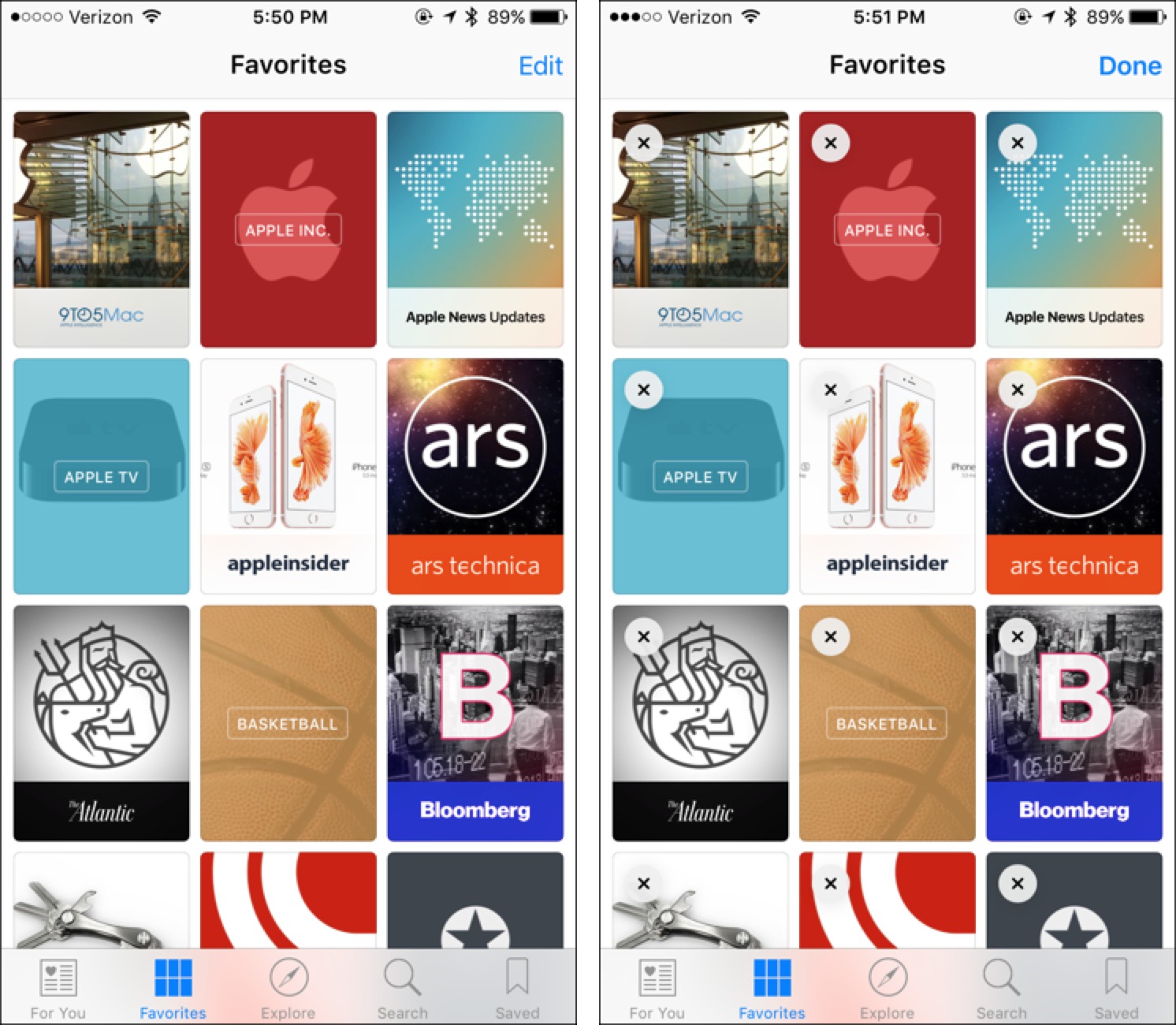 To find more topics and sources to subscribe to, check the Explore and Search tabs. Explore recommends channels and topics, and also lets you browse categories. Search, of course, lets you search for both specific publications and general topics that don’t show up in the minimal category listing. 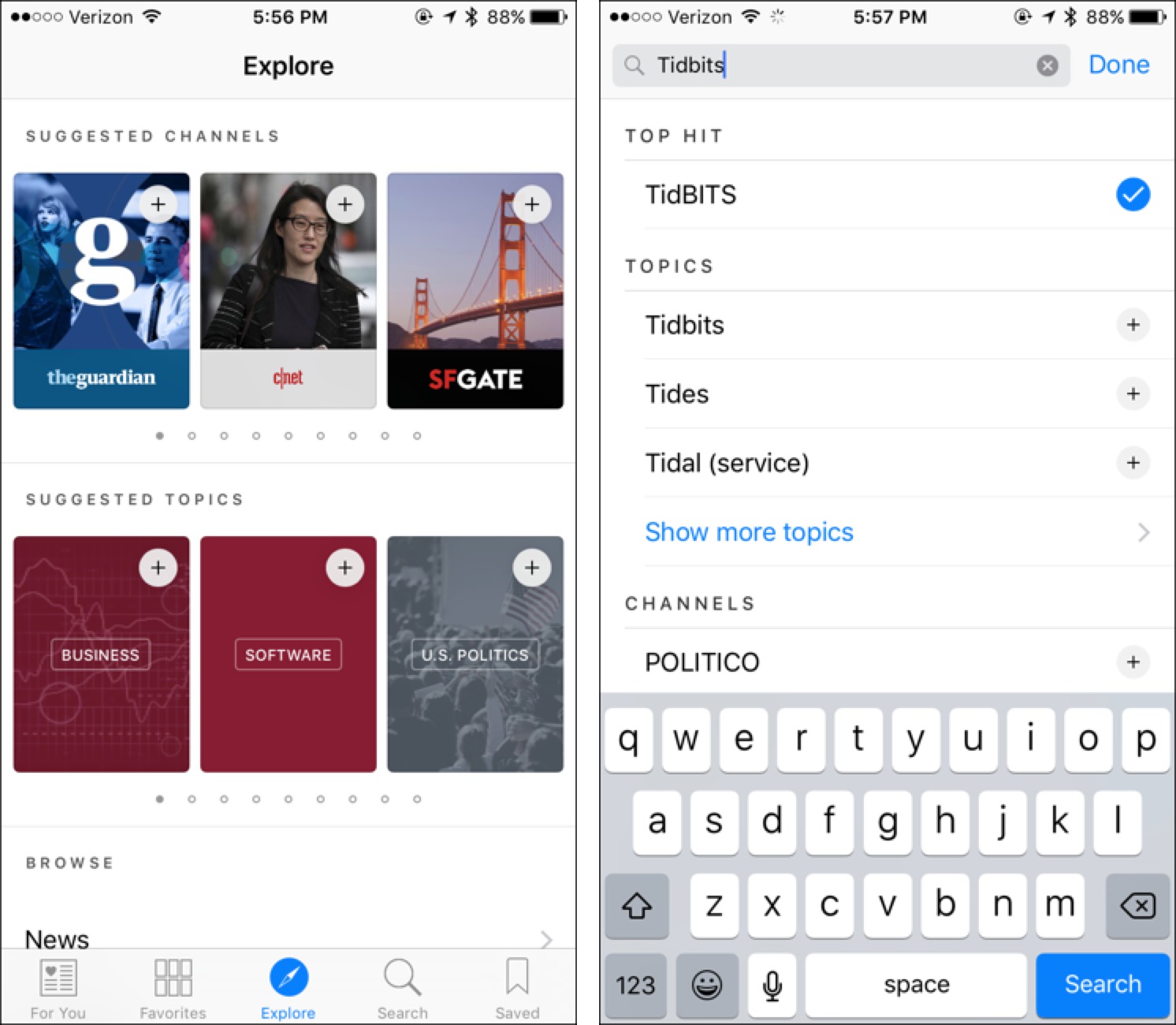 The sources you select will affect the recommended articles that appear in the For You tab. To further influence what you see there, tap the heart icon while reading an article in Apple News to tell Apple that you “love” it.

Unfortunately, every reviewer so far has agreed that For You’s recommendations aren’t particularly good. To view individual channels and topics instead, look in the Favorites tab. Unfortunately, you can’t customize topics, create your own, or do anything to group together news sources of your choice — you’re completely at Apple’s mercy here.

Likewise, Apple News publishers must be approved by Apple, so if one of your favorite publications or sites hasn’t been approved by Apple, or hasn’t bothered to sign up for Apple News, you’ll have to read it elsewhere. In a situation reminiscent of Apple’s paternalistic approach toward App Store and iBooks Store approvals, a number of well-known blogs and publications are fuming about the opaque rejections.

However, there is a way to maybe add an unapproved publication to News. The Safari Share Sheet sometimes offers an Add to News button, but I’ve had little luck getting it to work. It doesn’t appear at all at two Web sites not yet in Apple News: The Loop and Reason. It does appear on my personal blog, but displays an error message when I try to add it to News. The one site where I’ve gotten the Add to News button to function successfully is author George R.R. Martin’s LiveJournal. 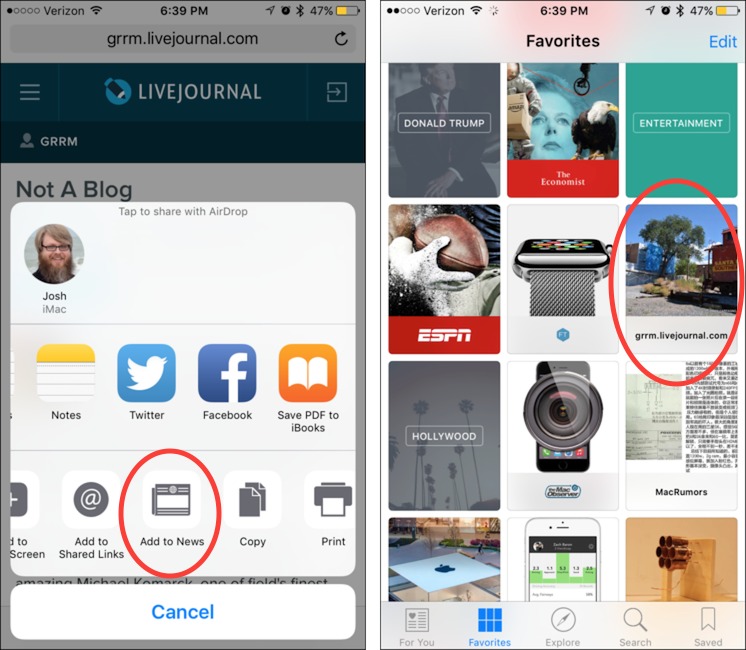 One last setup tip: News can sync over iCloud, but it doesn’t by default. Turn on News in Settings > iCloud to sync your preferences and saved articles between devices.

Saving and Sharing — To save an article to read later, tap the bookmark icon so it turns solid blue. That article will then be available to read in the Saved tab, even offline.

The Saved tab features a second pane: History, which lists your most recently read articles. So even if you forget to save an article, you can still bring it up from there, but you can’t read it offline (unless you saved it), as denoted by the cloud icon. 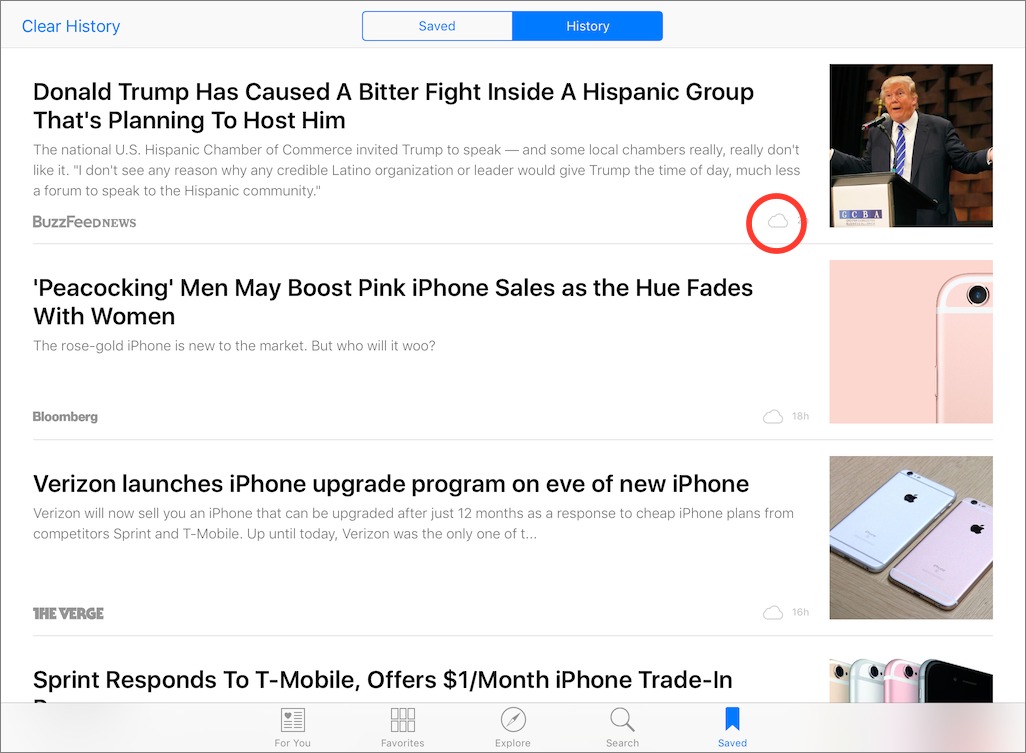 Sharing works just as it does everywhere else in iOS: tap the Share button and select where you want to send the article. But there’s an interesting twist: the shared URL is a proprietary apple.news URL. If tapped on a device running iOS 9, the link will open in News, but if clicked on another platform, it will open in the default Web browser with the original URL.

Goodnight and Good Luck — Apple News won’t satisfy hardcore news hounds who prefer apps like Reeder, but it might do the job for those who just want to check the headlines. In any case, it’s a much better approach to publications than Newsstand ever was, for both readers and publishers.

For me to take News seriously, it needs to offer some way for me to do my own source grouping. In most RSS readers, this is done with folders, into which I can file a number of different feeds. Speaking of feeds, I need a reliable way to add things that haven’t yet been approved by Apple, since not everything I want to read is available in News.

I understand Apple’s reasoning here, and I appreciate it: maintaining your own RSS folders is a pain. And while I do somewhat appreciate the simplicity of the curated approach, I’d like more control, especially since the curation isn’t good so far. No one seems particularly happy with the For You section, which seems less like tailored content and more along the lines of random articles tossed in a bucket.

It’s also odd that News isn’t included in OS X 10.11 El Capitan. Does Apple not think that people read news on the Mac? If you do, you need to keep using an independent solution.

Finally, I find the weird apple.news URLs annoying. I get that Apple set them up so a link could be opened in News or a Web browser depending on the device, but if I just want to share the link, I want the original! Apple trying to take ownership of URLs away from site owners is unsettling.

These Apple-specific URLs, along with the forthcoming proprietary Apple News format, point to a troubling trend: tech companies staking a foothold in journalism, which is manifesting itself in a couple of ways. Apple falls under the first, which is trying to wrest control of the experience away from publishers. But Apple isn’t the first to do this: Google News has stood between readers and publishers since 2002, often to the chagrin of publishers. But interestingly, some publishers are welcoming Facebook’s new Instant Article format, with Facebook also
helpfully offering to host the content and even sell ads.

The second way tech is taking control of journalism is the old-fashioned way: cash. Amazon founder and CEO Jeff Bezos bought the Washington Post, and Comcast-owned NBCUniversal invested $200 million each in both Vox Media and BuzzFeed.

Granted, Apple’s efforts here are more innocuous than buying media outlets outright, which it could certainly afford to do. And the Microsoft-NBC joint venture MSNBC hasn’t exactly set the world on fire in its 19 years of existence, so maybe tech’s financial takeover of the media won’t be the end of the world.

But I still worry about the potential ramifications. If a publication depends on Apple, Facebook, or Google for audience reach or even revenue, will it ask its journalists to pull punches in coverage of those companies? Even if they don’t ask, will writers subconsciously go easier on their known benefactors? Those questions loom even larger when tech giants own the media outlets, in whole or part.

This isn’t idle speculation: we’ve already seen something alone these lines happen. In 2013, CNET awarded Dish Network’s Hopper its “Best of CES Award,” or at least tried to. If you’re not familiar with the Hopper, it’s a digital video recorder that automatically records broadcast channels and strips out the commercials. Unsurprisingly, this angered CBS, which owns CNET. CBS forced CNET to rescind the award, and even though CNET ended up giving the Hopper the award anyway, CNET’s credibility was damaged.

Don’t worry, you can always come to TidBITS for honest coverage, regardless of where you read us… at least until our $200 million check from Comcast clears (shortly after the first frost in Hades).

Comments About The News about News in iOS 9