Google and Apple, once nothing alike as companies focused on Web search and consumer hardware, respectively, have more recently engaged in a tit-for-tat tech battle with hardware, software, and services that practically mirror each other.

This was all too clear in the two companies’ recent product announcements. Apple made the first move in September by unveiling two new iPhone models and the productivity-focused iPad Pro, along with a revamped Apple TV.

As expected, Google responded with a set of announcements that show how the search-engine giant increasingly competes directly with Apple.

Google unveiled two Android-based additions to its Nexus smartphone line, and a Pixel-branded tablet focused on productivity, along with two new Chromecast streaming-media devices for use with televisions and home speakers. There were even some updates to Google Play Music and Google Photos.

New Nexus Phones — Amid a spate of independent smartphones running Android, which has become the largest mobile platform, Google periodically works with a manufacturer to create cutting-edge Nexus devices in an attempt to set the market’s direction.

This year, for the first time since the Nexus brand was created, Android fans have a choice of two smartphones.

The new phones, the Nexus 6P and Nexus 5X, have a few things in common: the new Android 6.0 “Marshmallow,” USB Type-C charging connectors like the one on Apple’s 12-inch MacBook, a 12.3-megapixel rear-facing camera with larger pixels for better low-light performance, 4K and slow-motion video shooting, and a Nexus Imprint fingerprint sensor.

That sensor is intended to be used with Google’s new Android Pay system in brick-and-mortar stores with NFC terminals, just as Apple’s Touch ID sensor is used with Apple Pay for similar tap-to-pay transactions in stores. And, like Touch ID, the Imprint sensor provides access to locked phones in place of a passcode.

The only major difference: Google’s sensor is on the back of the phone.

Both Nexus phones also work with Google’s new Project Fi wireless service, which blends Wi-Fi with cellular signals from multiple sources (including T-Mobile and Sprint) to ensure a dependable data connection. Project Fi previously worked with only one phone, the Nexus 6.

Marshmallow brings with it a number of useful features, such as a Doze mode that puts certain phone functions into standby mode if the handset is left unattended. Sound familiar? Yeah, it’s a lot like iOS 9’s Low Power Mode.

The new Nexus phones are otherwise quite different from each other.

The 5.7-inch Nexus 6P is the first Nexus with a body made entirely of metal – aeronautical-grade aluminum, specifically – which brings it in line with all-metal designs from Apple and other makers.

The phone, along with its smaller sibling, has a potential leg up on the new iPhones with 1.55-micron pixels in its camera sensor, compared to 1.22 microns with the Apple iSight equivalent. This, at least on paper, translates into better low-light performance. Google made much of this (and other low-light features such as enhanced autofocus and HDR) in its press event.

But Nexus 6P has one big, recently publicized hardware downer: it lacks optical image stabilization for photo and video shooting, a marquee feature in its Apple counterpart, the iPhone 6s Plus. Google, after first insisting optical image stabilization is not needed because of the improved sensor, later said it would try to remedy the problem (at least up to a point) with a software update.

The smaller 5.2-inch Nexus 5X, manufactured by LG, is a direct successor to the popular, now-discontinued Nexus 5. The 5X, made of soft-touch plastic instead of metal, has a single front-facing speaker, a 5-megapixel front-facing camera, and a 1920-by-1080-pixel screen with Gorilla Glass 3. It costs $379 for a 16 GB version and $429 for a 32 GB version. It’s offered in black, white, and light blue.

Both handsets are available for preorder in a handful of countries, including the United States, with U.S. shipping estimates of 2–5 weeks depending on the model and configuration. Google is sweetening the deal with a 90-day Google Play Music subscription, and a $50 Google Play store credit for purchasing apps, games, music or video content.

For the first time, Google is also offering a Nexus Protect plan that bumps the 1-year manufacturer warranty up to 2 years, and throws in 2 years of accidental-damage protection (which allows for two accident claims, each with a $79 deductible). Such a plan costs $69 for the Nexus 5X, and $89 for the Nexus 6P. The plans bring Google roughly in line with Apple, which also offers AppleCare+ accident coverage for its iPhones.

Pixel C — On the tablet front, Google is rolling out its first model developed entirely internally. Earlier Google tablets were developed in partnerships with third-party makers, which yielded mixed results.

What’s more, the 10.2-inch tablet eschews the Nexus brand in favor of the Pixel name shared with the high-end Chromebook Pixel notebook (also developed internally at Google). The tablet has the same all-aluminum, angular styling as the Chromebook Pixel, and a similar high-resolution display, along with the same USB Type-C charging technology.

But, to confuse things a bit, the Pixel C does not run the Web-focused Chrome OS operating system, as the Chromebook Pixel does, but Android Marshmallow.

The Pixel C, like Apple’s iPad Pro, is largely intended for productivity. That’s why Google is offering a $149 add-on keyboard that interacts with the Pixel C via Bluetooth. The keyboard attaches magnetically to the Pixel C via a flip-up slab that sticks to the tablet’s back and functions as a sort of docking station. 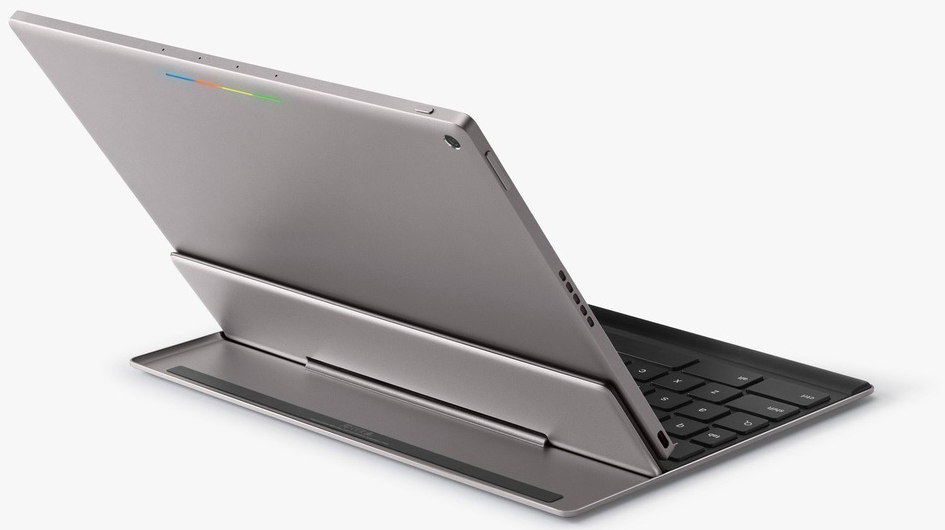 The magnetic connection is so strong that the tablet can be suspended upside down from the keyboard, as a Google employee demonstrated during the press event.

The metal keyboard has keys similar to those on the Chromebook Pixel (with the transfer of some lesser-used keys onto the tablet screen to make room). It also permits the Pixel C to be angle-adjusted, via that flip-up slab, much like a notebook screen. The keyboard gets power from the tablet, meaning it doesn’t need to be charged separately, and holds two months of juice. 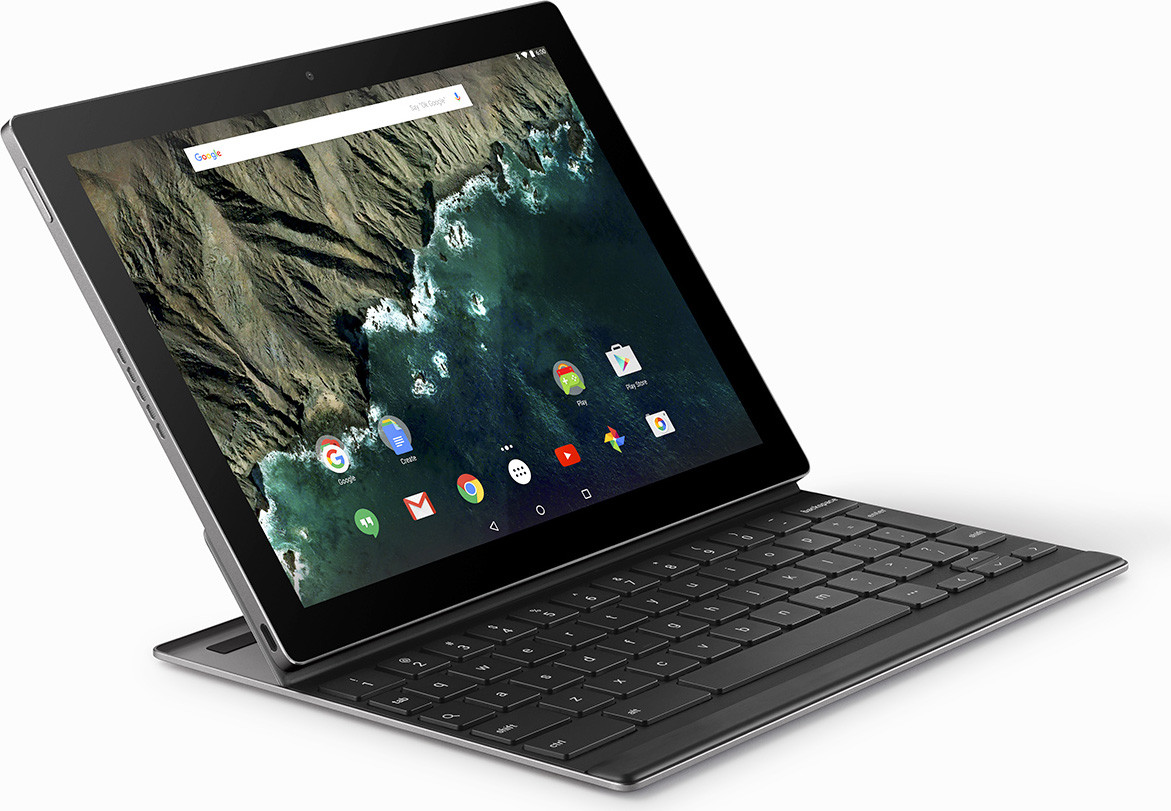 Chromecast — Google, instead of offering a remote-driven streaming-video box like the Apple TV, makes a more compact dongle that connects directly to a television’s HDMI port and is controlled with a smartphone, tablet, or computer instead of a remote.

With it, Chromecast-friendly apps on a laptop or handheld can use a television as an alternative display (but communicate with the TV via the Internet instead of home Wi-Fi, a la Apple TV). Chromecast-ready apps now number in the thousands, and include many of big names in news, entertainment, sports and gaming.

This is all fully cross-platform, with support for iOS devices, Android variations, and any computer running the Google Chrome Web browser.

Now Google has revamped its Chromecast dongle. It has a new design, which vaguely resembles a round piece of candy, and is available in black, red, and yellow. The HDMI connector is now in the form of a short cable that better fits into a TV’s HDMI port in cramped quarters. 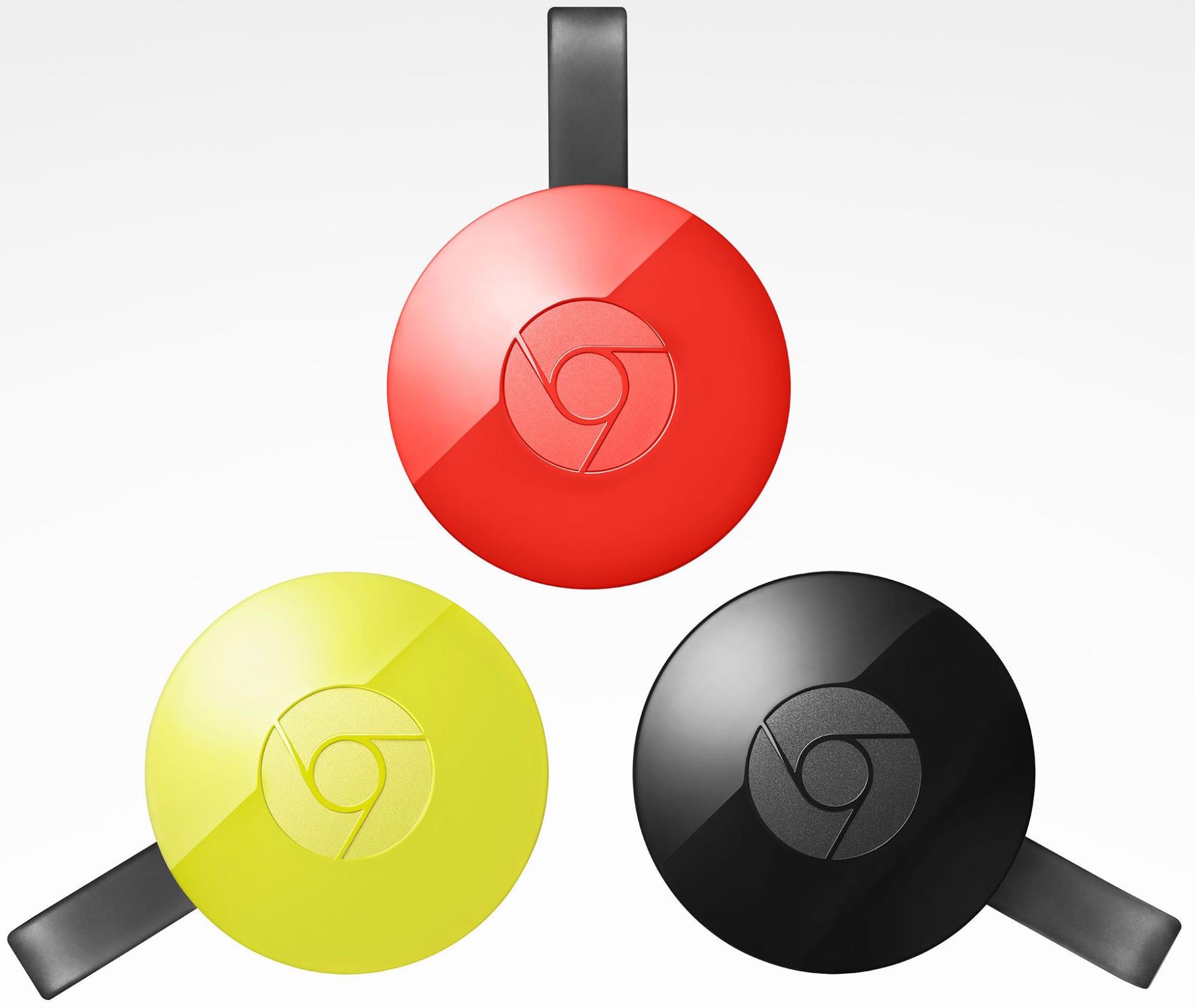 The new Chromecast supports the latest Wi-Fi standards and, according to Google, has antennas that adapt more capably to changing Wi-Fi conditions in a home to ensure optimal video streaming with less buffering.

Chromecast now turns a smartphone into a gaming controller while the main action is shown on your TV, and two or more phones can be used for multi-person gaming. A TV wallpaper feature called Backdrop has been updated with support for the 500px and Getty Images services.

A separate Chromecast Audio device, also announced last week, is designed to plug into home speakers instead of a TV, and to stream a wide range of audio programming once connected to Wi-Fi. This includes the likes of Spotify, Rdio, Pandora, and Google Play Music, Google’s Apple Music counterpart. The rounded device can be controlled using Android and iOS apps as well as desktop computers. 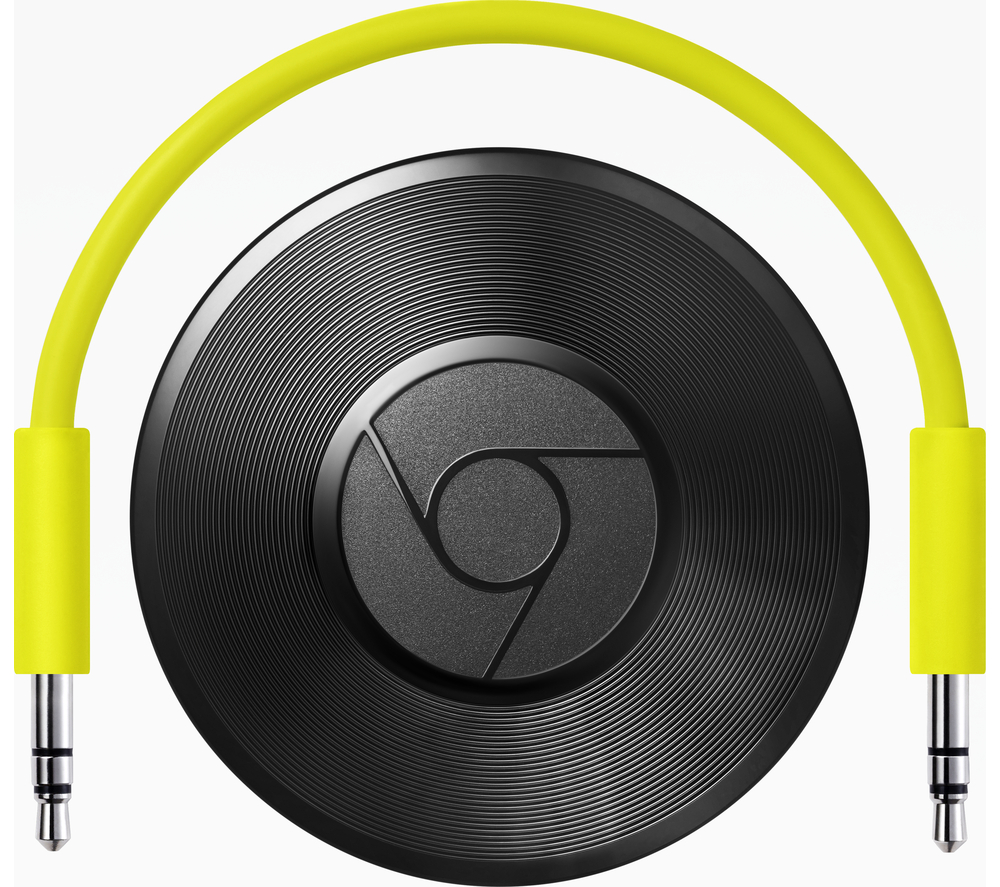 The Chromecast Audio also costs $35, and is available now.

Google is updating its Chromecast mobile app for Android and iOS to make sifting through the thicket of Chromecast-compatible apps more convenient. It will even provide app recommendations. The updated apps are due to be available in the next few weeks.

Google Photos — Almost lost in the flurry of hardware announcement were a couple of updates to Google Photos, a direct competitor to Apple’s iCloud-based photo service.

Google Photos is a compelling service, even for many Apple users, since it allows for unlimited uploading of photos up to 16 megapixels, or 15 GB of full-resolution uploads (after which charges apply). Apple’s iCloud Photo Library offers only 5 GB of free storage.

Last week Google announced augmented facial-recognition searching, a shared albums feature roughly comparable to one available via iCloud, and Chromecast-based photo viewing that’s similar to how photos can be seen on an Apple TV. Google Photos even turns a burst sequence of shots into an animated GIF as a rough approximation of Apple’s Live Photos feature, which is new on the iPhone 6s and 6s Plus.

There was no mention of the photo editing features that were rich and powerful in the old Google+ Photos version of the pictures service, but were eviscerated in the transition to Google Photos. For Mac users, this makes the addition of support third-party editing extensions in Apple’s Photos app all the more compelling.

Google’s Hardware Play — Apple fans will have varying degrees of interest in – or indifference about – the new Google products, depending on which we’re talking about.

Mac users have little incentive to buy the Nexus phones in place of iPhones, for instance, since they’ll miss out on Apple’s ecosystem integration.

The same goes for the Pixel C, given a wide variety of iPad models for every budget and use case, with those tablets also part of a tight-knit Apple ecosystem.

Besides, Google does a good job of providing iOS apps for Apple users who use Google cloud services.

The Chromecast devices are more interesting from an Apple vantage point since they can be controlled from iOS as well as Android. All but the most budget-constrained Apple users will probably just get the upcoming fourth-generation Apple TV, though.

Regardless, even the most diehard Apple users should be appreciative of Google’s products since they will spur Apple to continue to innovate, and the end result should be ever-better products at a rapid clip. Apple and Google have been one-upping each other for a while now, and that trend does not look to wane any time soon.