In the latest example of the inexorable progression of technology, Apple has updated the iMac line, adding a 21.5-inch iMac with 4K Retina display and dropping the non-Retina version of the 27-inch iMac, all while keeping the industrial design the same. That means that there are still essentially three models of the iMac available:

Let’s look at the specs of each in turn, and follow that with a glance at the spiffy new Magic Keyboard, Magic Mouse 2, and Magic Trackpad 2. All the new products are available immediately. 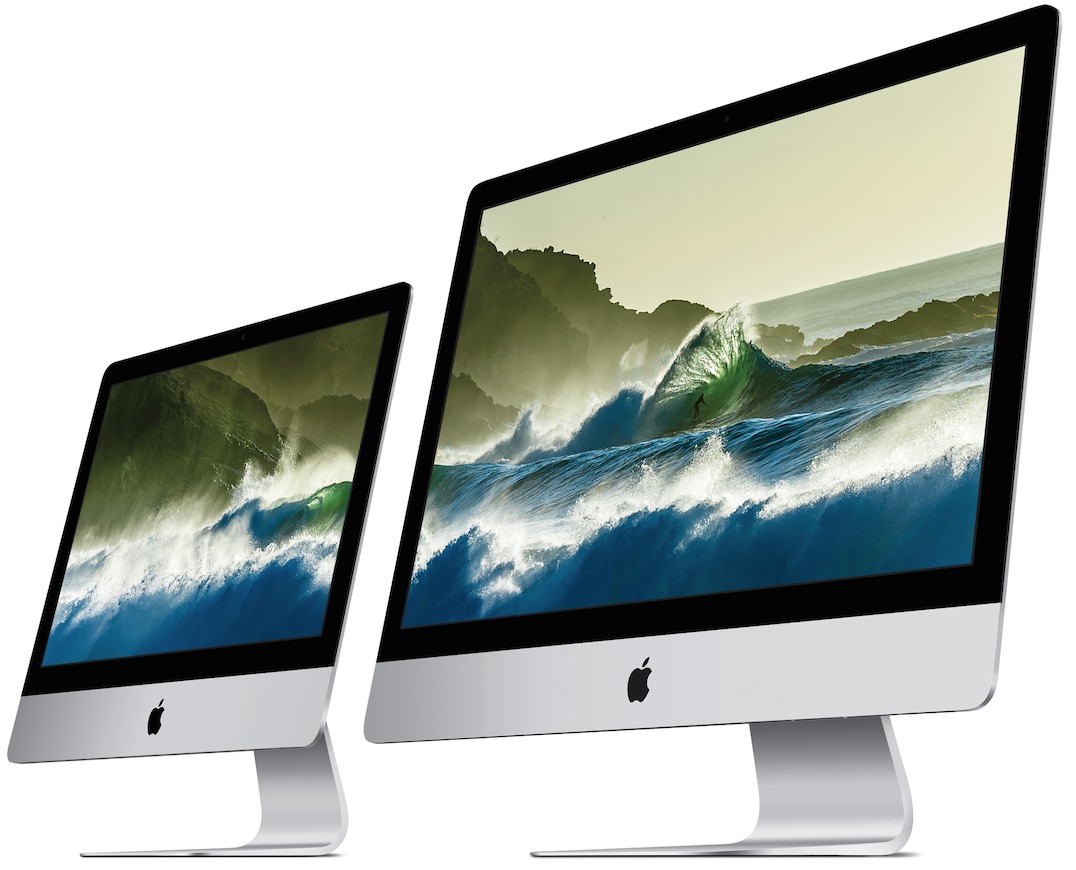 These models maintain the same prices as the models they replace while bumping processor speed by 0.1–0.2 GHz, increasing the drive size on the low-end model, and updating the Intel-based graphics.

If you can swing the extra $200, get the 2.8 GHz quad-core model — the performance should be significantly better. After that, your next big performance win will be in trading out the slow 5400-rpm hard drive for either a 1 TB Fusion Drive or 256 GB of flash storage, depending on your storage needs.

While I’ll happily confess a bias towards the larger 27-inch screens, if you simply don’t have room for a 27-inch behemoth, the 21.5-inch iMac with 4K Retina display can be configured extremely well, with the faster CPU, 16 GB of RAM, and either a Fusion Drive or flash storage. It looks like a winner, if desk space is at a premium.

27-inch iMac with 5K Retina display — I’m biased, as I said, since this is essentially the Mac I’m writing on now, and the model that Tonya, Josh, and Michael have all gotten recently as well. It’s one heck of a nice machine, and while it’s trite to say that it’s the nicest Mac I’ve ever used (since you’d expect nothing else from a new model), it is.

Apple now offers three versions of the 27-inch iMac, all of which share the 5K Retina display running at 5120 by 2880, although Apple claims the screen on the new models displays a wider gamut of colors. Previously, the 5K Retina display could show all of the industry standard sRGB colors, but the new screens support a newer color standard called P3 that’s about 25 percent larger than sRGB.

The differences come in CPU, graphics processor, and storage options.

The graphics capabilities on the new 27-inch iMac mean that it can support full native resolution on the built-in display and up to two 4096-by-2160 external displays or one 5120-by-2880 dual-cable external display. That’s a major improvement — the previous 27-inch iMac with 5K Retina display could support only one external display at up to 3840 by 2160 pixels. We can hope this means that Apple will be releasing a 27-inch Retina Thunderbolt Display soon, although a dual-cable solution doesn’t seem like Apple’s style, so we may have to wait for the higher-bandwidth Thunderbolt 3.

Pricing is a little funny with the new 27-inch configurations. The pricing for the top two versions is the same, but they previously had CPUs with slightly higher clock speeds, 3.3 GHz versus 3.2 GHz, and 3.5 GHz versus 3.3 GHz. It’s likely that the sixth-generation Intel Core i5 “Skylake” processors make up the performance difference, but it’s unusual for Apple to release new models with slower CPU clock speeds. Regardless, if you want the most performance, spring for the 4.0 GHz quad-core Intel Core i7 upgrade.

Most notably, all three new Magic input devices feature rechargeable lithium-ion batteries that are recharged via a Lightning-to-USB cable much like the forthcoming Apple Pencil. You don’t have to wait long, either — a 2-hour charge will last a month, but plugging in for just a minute will give you enough juice to work for half a day.

This is huge — although I prefer a clicky Das Keyboard and oddball Contour Designs RollerMouse Pro 2 for my input devices, Tonya uses the wireless Magic Mouse, and is continually fussing with its batteries. That Lightning-to-USB cable also serves to pair the devices to the Mac, which should reduce Bluetooth pairing hassles. Better yet, the Magic Keyboard and Magic Trackpad 2 can reportedly operate while connected via USB, at which point they don’t even need Bluetooth.

Until we get our hands on the new devices, it’s hard to do more than repeat Apple’s claim that they “feature a noticeably more solid internal structure and quality feel.” Apple did provide pre-release units to Jason Snell of Six Colors, so you can read his reviews of the Magic Keyboard and Magic Trackpad 2.

The Magic Keyboard is a full-size keyboard that takes up 13 percent less space and has a lower profile, perhaps in part thanks to a new scissor mechanism. Nonetheless, it has larger keys than its predecessor. (But it still lacks a keypad — sorry, spreadsheet jockeys.) It doesn’t sound as though it’s the same mechanism as in the 12-inch MacBook, where Apple touted the “Apple-designed butterfly mechanism that is an amazing 40 percent thinner than a traditional keyboard scissor mechanism yet four times more stable.” So we’ll just have to wait and see how it feels. There’s no keyboard backlighting, unfortunately, since that would hurt battery life.

Apple says the new Magic Mouse 2 is “lighter, sturdier and features an optimized foot design for a smoother glide.” More interesting is the Magic Trackpad 2, which features a 29 percent larger surface and adds the Force Touch feature that has thus far been restricted to certain MacBook models. With Force Touch, you can force-click by pressing on the trackpad and then applying more pressure — it essentially offers another modified click.

These new iMacs and pointing devices aren’t — and shouldn’t be — revolutionary. But they’re extremely nice improvements on already top-notch hardware that required a massive amount of engineering work — Steven Levy has a great article in Medium’s Backchannel about how Apple sweats the details. If you’ve been waiting to buy an iMac, now’s the time.