Apple has announced that all seven of J.K. Rowling’s “Harry Potter” novels are now available in “enhanced editions” exclusively from the iBooks Store. Each book is priced at $9.99, and each features a new cover, color illustrations, embedded animations, and new material in the form of annotations by Rowling. 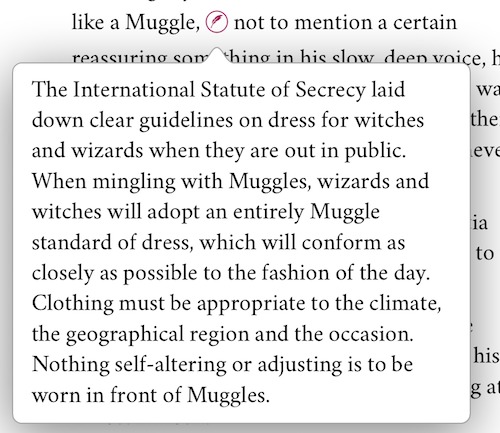 While this news might not be especially interesting to readers who already have copies of the books in paper or in the digital editions previously released by Pottermore, Rowling’s digital entertainment and ecommerce company, it does have some significance for those with a general interest in digital book publishing tools. Why? Because of the books’ iBooks Author connection.

For those late to the story, Apple released its free iBooks Author creation tool nearly four years ago (see “Apple Goes Back to School with iBooks 2, iBooks Author, and iTunes U,” 19 January 2012). Back then, it was a rather limited, though promising, ebook creation tool: the biggest limit was that books created with iBooks Author used Apple’s proprietary “Multi-Touch book” format, which can be read only on iPads running iBooks 2, instead of the open EPUB standard. Furthermore, Apple promoted iBooks Author as a tool for educators and educational publishers, and the distribution limitations that Apple imposed on ebooks created by it made the app less attractive to the wider ebook publishing community than it might have been.

But that didn’t stop some people from employing iBooks Author for non-educational books. After all, the Multi-Touch book format is well-suited for things like cookbooks, travel books, and many other kinds of books that can benefit from iBooks Author’s layout capabilities and interactive widgets.

iBooks Author became somewhat more EPUB-friendly last year with version 2.2, when it gained the capability to import standard EPUBs (see “iBooks Author Gains New Import Options,” 17 October 2014). The app still only produced Multi-Touch books (or non-interactive PDFs), but an author could at least import a standard EPUB and use iBooks Author’s capabilities to enhance it with interactivity and attractive page layouts.

In general, not much different than any other EPUB. This should not be surprising: iBooks Author’s EPUBs conform to the EPUB 3.0 standard, so, in the absence of any additional digital rights management, they can be read in any EPUB viewing program that supports EPUB 3.0. That’s not to say that the ebooks will work perfectly in non-Apple EPUB viewers. For example, if the ebook contains interactive widgets — and iBooks Author provides four types of widgets suitable for inserting in EPUBs — those widgets may not work as intended. In many cases, the interactive widgets appear as non-interactive illustrations instead.

Nonetheless, in iBooks itself, iBooks Author EPUBs do look and behave somewhat differently than more typical EPUBs do, though the differences are subtle.

First, iBooks Author includes typeface information (and, in some cases, the typefaces themselves) in the EPUBs that it exports, and iBooks respects that information: if you create an EPUB that uses, say, Cochin as its body text typeface, readers will see Cochin. Unlike most other EPUBs, an iBooks Author EPUB does not allow readers to choose a different body text typeface: the user may specify a type size but not a different face. Similarly, the various themes that iBooks makes available to ordinary EPUBs (such as sepia and night) are not offered for iBooks Author EPUBs. Nor does iBooks respect the justification or hyphenation settings you may have chosen in iBooks when it lays out iBooks Author EPUBs: even if you want full justification
and hyphenation, iBooks uses the justification and hyphenation settings chosen by the publisher. (FYI: The enhanced Harry Potter books are not hyphenated, and they have ragged right margins.) 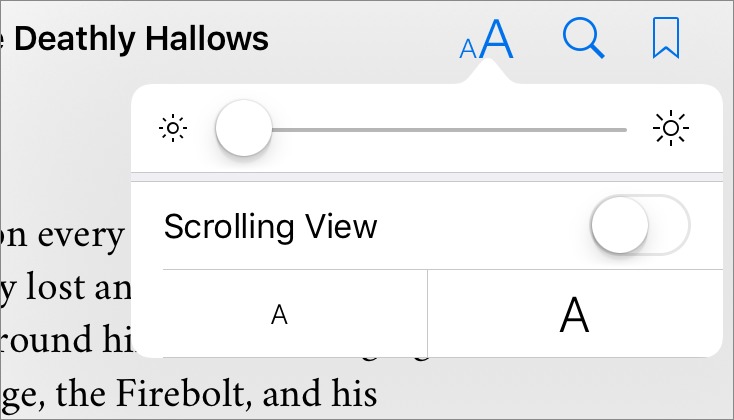 Second, the ability to choose a single or double-column layout in iBooks for the Mac is not available for an iBooks Author EPUB. On the Mac, such EPUBs always lay themselves out in two columns on a page. What’s more, if you expand the size of the book window, you don’t see more text as you would with other EPUBs. Instead, making the window larger increases the size of the text.

Third, in an iBooks Author EPUB, instead of the single button in the book’s header that you usually see in iBooks for iOS for accessing an ebook’s integrated Table of Contents, notes, and bookmarks page, you get separate buttons in the header for accessing each of them.

(When it comes to your notes, in fact, the educational heritage of iBooks Author becomes obvious: you can use your notes as study cards in iBooks Author EPUBs just like you can in Multi-Touch books.) 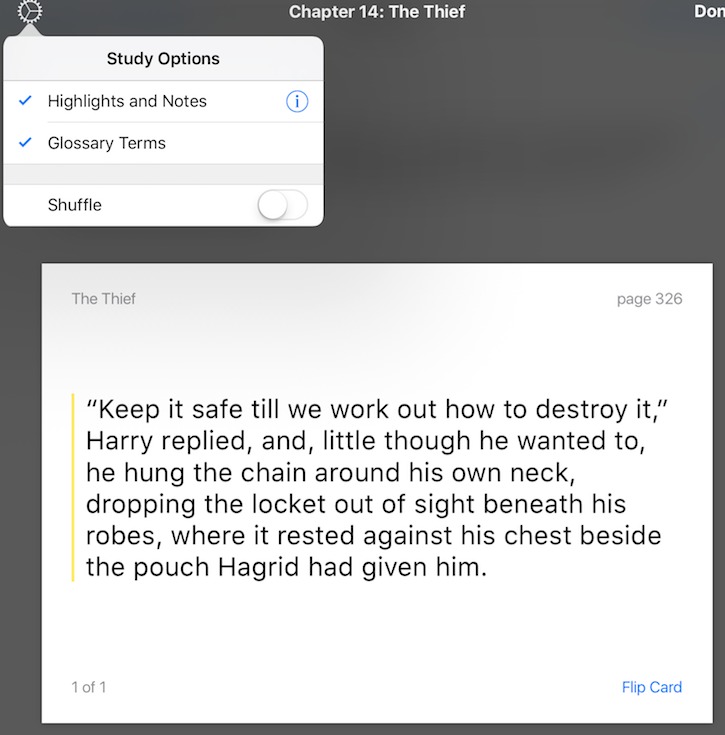 Finally, the addition of interactive materials, of necessity, usually makes an iBooks Author EPUB significantly larger than its non-iBooks Author equivalent. For example, the enhanced edition of “Harry Potter and the Deathly Hallows” consumes more than 88 MB of storage compared to the 2.2 MB taken up by the non-enhanced edition.

So, should you buy the enhanced editions of the Harry Potter books? If you’re not an ebook geek, and if you already have the books in your library, the added value is not compelling. The enhancements, while tastefully executed and often charming, ornament rather than enrich the story. Some are simply very short animation loops (for example, witches about to take flight from Privet Drive bob up and down on their broomsticks) or show a simple transformation (the War Memorial in Godric’s Hollow becomes a statue of the Potter family); others provide limited interactions (touch a stack of paper in Xenophilius Lovegood’s messy office to knock it over). 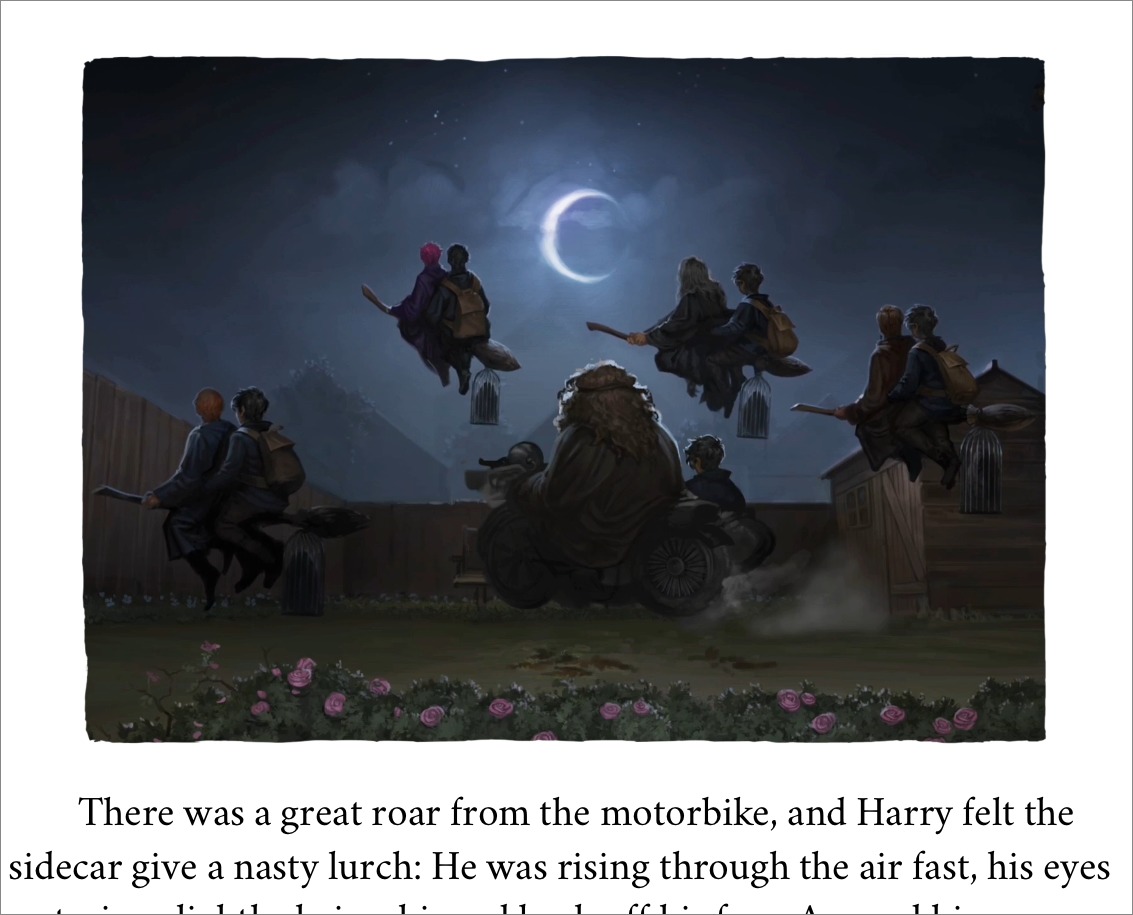 This unambitious approach to enhancements is not necessarily a bad thing: the main selling point of the books is the stories they tell, and added enhancements that adorn but do not distract makes sense. At the same time, they don’t constitute sufficient reason to buy the books again.

For ebook geeks, the Harry Potter books provide a good example of the high quality EPUBs that iBooks Author is capable of producing and the features that iBooks Author EPUBs can include — though you needn’t buy the whole set to explore that: one will suffice.

If you don’t have the Harry Potter books and want to add them to your library, these enhanced editions are worth considering. The books do look good. Nor is the price excessive: you can get the whole set for less than $70, not much more than you’d currently pay for a non-enhanced Harry Potter set in Kindle format.

Alas, unlike Pottermore’s original digital editions, the enhanced Harry Potter EPUBs come protected with Apple’s FairPlay DRM, so they are locked to your iBooks Store account and the iBooks app: you can’t open them in a different EPUB reader or loan them to a friend. For me, that’s one enhancement that isn’t so enchanting.

Comments About Harry Potter and the iBooks Author