You’re probably familiar with Siri’s extremely useful reminder functionality, which integrates with the built-in Reminders app for iOS. Siri can remind you to do things based on time or location, so you can say, “Remind me to drop off the package tomorrow at 9 AM,” or “Remind me to grab the package when I leave home.” It’s especially useful when triggered from an Apple Watch, since you don’t even have to find your iPhone.

But you may not have known that in iOS 9, Siri can remind you to act upon content in certain apps, if you use the magic word “this” to indicate “what I’m looking at right now.” I wrote about this capability in “iOS 9: A Take Control Crash Course,” but it wasn’t until I went on vacation recently that I appreciated just how helpful this feature is.

I didn’t disconnect entirely while away — I occasionally checked my email and Twitter timeline so I’d be aware of what was going on in the outside world. For instance, I received an email message from Apple asking for diagnostic information from my Mac to help resolve a bug I had reported. But I was hundreds of miles away from home! So, while viewing the email message in Mail, I summoned Siri and said, “Remind me to read this when I get home.” I was then able to put the issue out of my mind until days later, when I pulled into the driveway at home. The Reminders app notified me on my iPhone, and the reminder stayed on my Lock screen until I marked it as done. 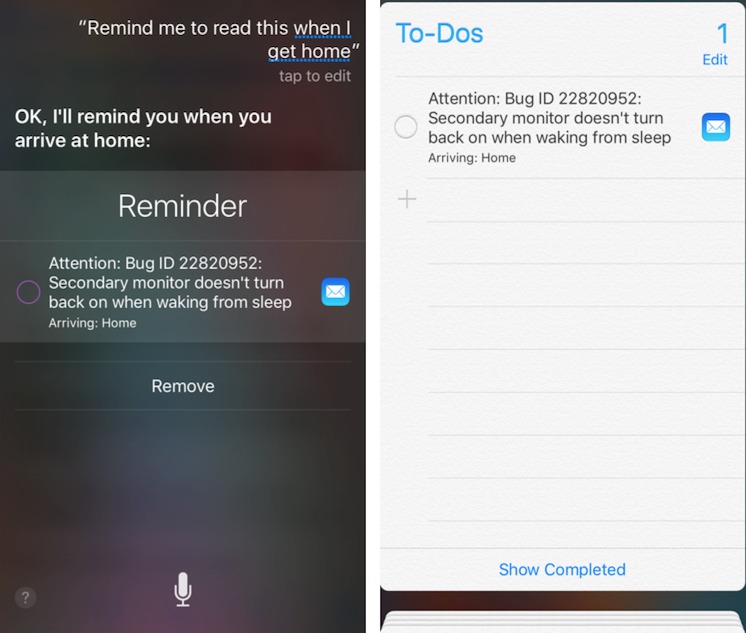 But you don’t have to be on vacation to appreciate Siri’s email reminders. If I’m reading on my iPad in bed at night and receive an email message about something I need to do for TidBITS, like editing an article, I can tell Siri to “Remind me about this in the morning,” and safely forget about it until the next day.

These content-specific reminders also work with Safari. Sure, I can add interesting articles to my Reading List for later perusal, but if it’s something important, I like to have a notification to help prompt me to read it. “Remind me to read this tomorrow at 10 AM.”

Note that Siri can’t create reminders for Web pages viewed in a Safari View Controller, such as the one in Tweetbot. You’ll have to tap the Safari button to open the Web page in Safari, and then bring up Siri. However, Siri can remind you of Web pages viewed in Safari in Slide Over on an iPad.

Siri can also create reminders for the Notes app, although, curiously, this doesn’t work for notes in the On My iPhone folder. For instance, you might use the new checklist function in Notes to create a shopping list, and then have Siri remind you to look at that list when you get to the store. You could create a contact for say, your favorite grocery store, but Siri can also recognize local businesses. If I say, “Remind me of this when I get to Walmart,” Siri creates a reminder that will be triggered when I arrive at my local Walmart. If you live in the sticks, like I do, you may need to be reminded at a store out of town, so you can say something like, “Remind me about this when I get to Home Depot in Bowling Green,
Kentucky.”

Why do this instead of just creating your list in Reminders? Flexibility — you can insert pictures and create drawings in Notes, which you can’t do in Reminders. I often take pictures of oddly shaped lightbulbs that need replacement, since bringing one into a store would be awkward.

Siri’s content reminders also work with Maps, though I have trouble getting it to work consistently. Sometimes Siri will recognize a location I’m looking at, while other times, it will say, “OK, just tell me what you’d like to be reminded about.”

Content reminders also work in numerous third party apps, though there’s a bit of trial and error in figuring out which ones support the feature. For instance, Siri can remind you about open documents in Pixelmator or the current calculation in PCalc. You’ll have to experiment to see what else Siri can remind you of. 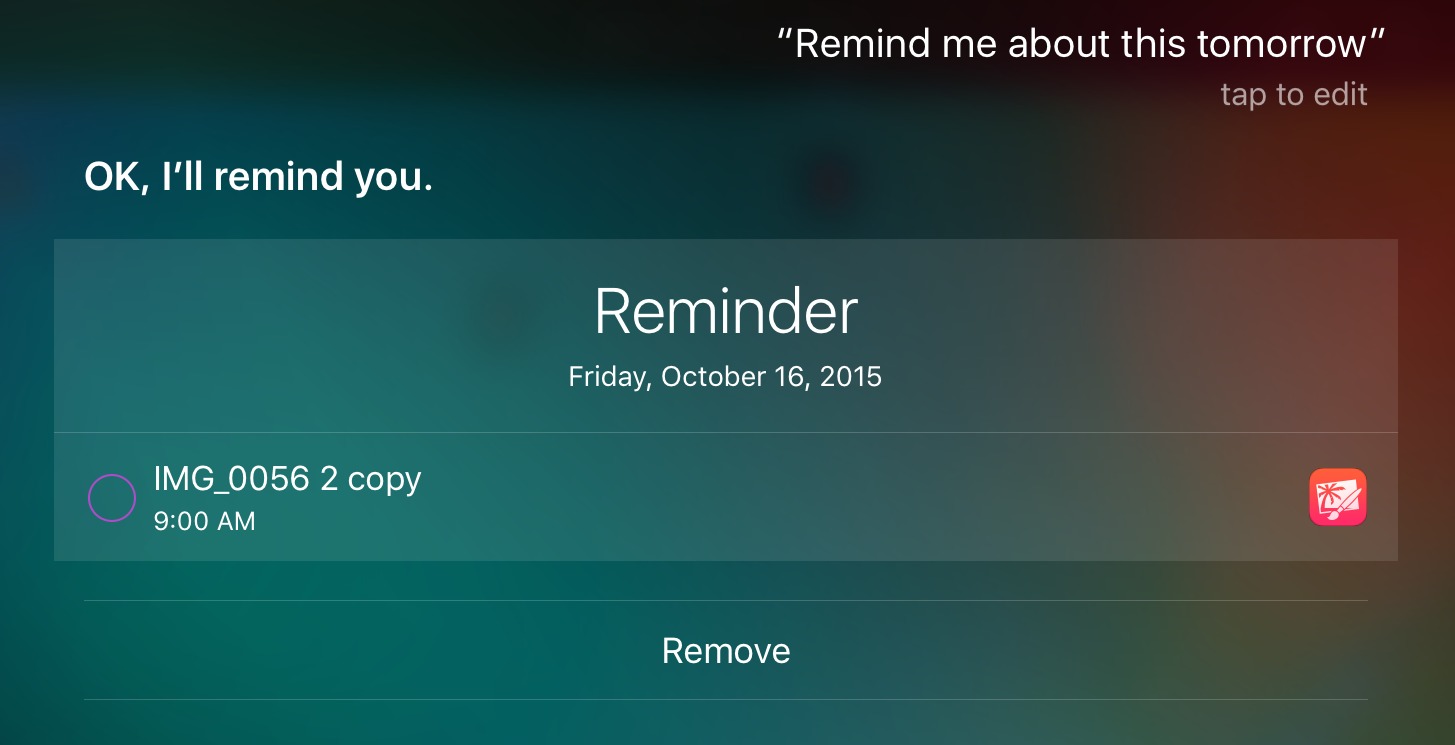 One last thing: there is a bug related to Siri reminders in iOS 9.0.2. Even if you delete a reminder from the Siri screen immediately after creating it (as you might do if Siri misunderstands your words completely, which still happens regularly), it will still be added to the Reminders app. So if you’ve ended up with a bunch of unwanted reminders, that’s why, and you can delete them in the Reminders app. Happily, this bug has been fixed in iOS 9.1.

Though easy to miss, Siri’s content reminders are one of the best things about iOS 9. You may not use them every day, but they can help you focus on what you’re doing, rather than what you have to do later.