Five of the six major Hollywood studios (along with a number of smaller movie studios, TV studios, and partners throughout the rest of the industry) tried to work around this by forming the Digital Entertainment Content Ecosystem and creating the UltraViolet digital locker system. In theory, you can register a movie with UltraViolet and watch it on any device. In practice, it’s awful, and frankly, I’ve never gotten it to work. Worse, Apple, Amazon, and Google didn’t choose to join the Digital Entertainment Content Ecosystem (DECE), so UltraViolet isn’t well integrated into those companies’ systems. On iOS, you (theoretically)
access UltraViolet content via the Movies by Flixster app, an app that was originally designed to view theatrical showtimes, with a video player tacked on later. It’s a mess.

Disney went its own way, as it often does. Last year, the company launched Disney Movies Anywhere, its digital locker alternative to UltraViolet. At first, the service wasn’t interesting, because it integrated only with iTunes. But recently, Disney Movies Anywhere added support for Amazon Video, VUDU, Google Play, and Microsoft Movies & TV.

In plain English, this means that you can buy “The Lion King” from iTunes on your Apple TV, and then watch it on your Amazon Fire TV or Xbox. It’s a great system, and how the world of digital video should work.

To get started, sign up for free at www.disneymoviesanywhere.com or sign in with your Disney account. (You may already have a Disney account without realizing it. For instance, if you have an account with Disney-owned ESPN, that doubles as your Disney login. The Magic Kingdom is vast and sprawling these days.)

Once you’re logged in, you can connect your various video-service accounts to Disney. Click the gear in the upper-right and then click Connect Accounts on the left. Select the checkbox by a service, like iTunes or Amazon Video, log into that account, and you’re done! Once your accounts are linked, it just works. You buy a movie on one service and it shows up in your collection on another. 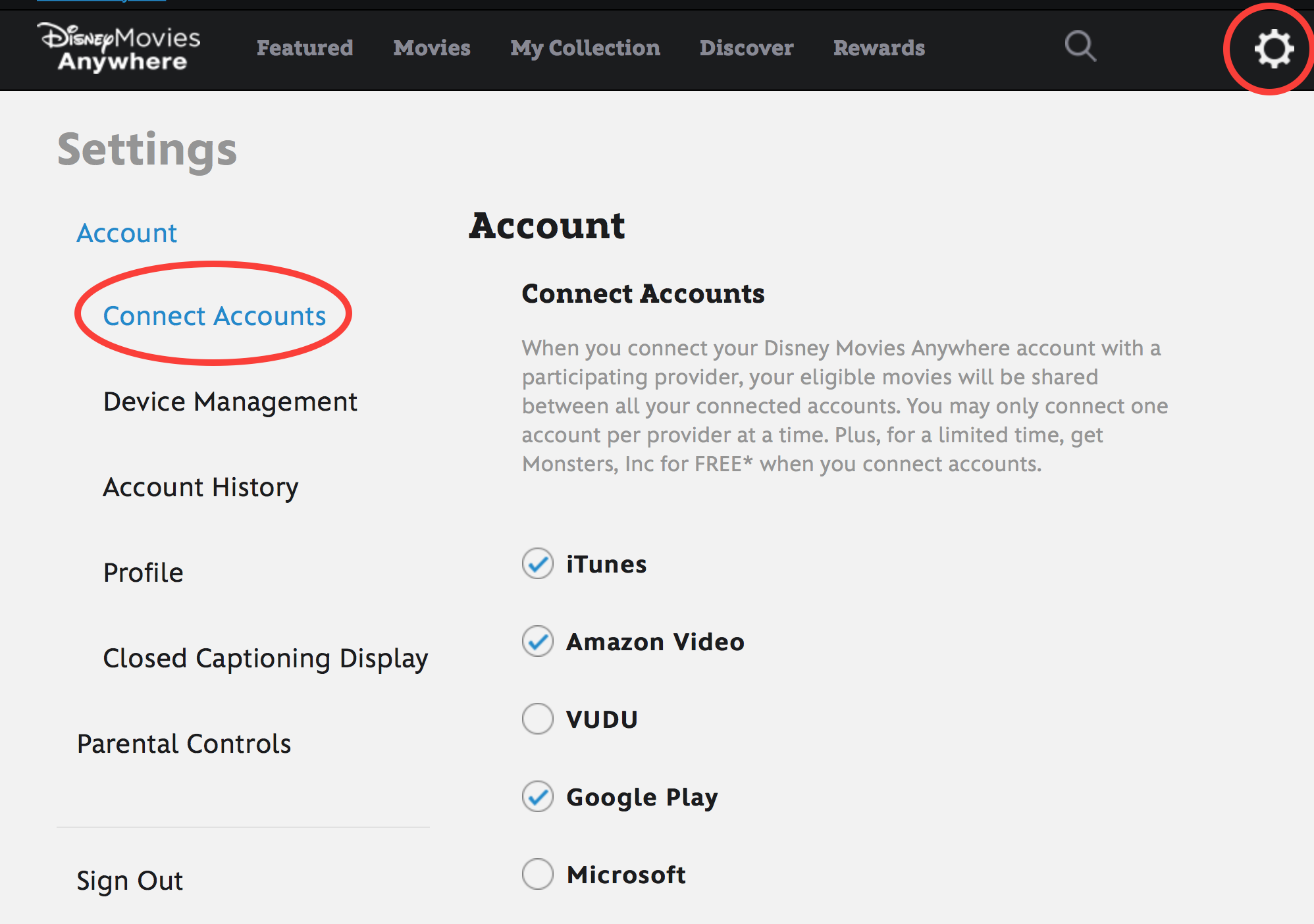 You can later disconnect accounts, but note that you can switch accounts with the same provider only once every 180 days. And the movies already registered with a provider will remain registered.

Disney often offers free movies when you link accounts. I got “The Incredibles” for free when I connected my iTunes account, and the company is currently giving away “Monsters Inc.” to new users.

When you think of Disney, you probably think of films for kids, but Disney also owns Marvel Studios and the Star Wars franchise, so Disney Movies Anywhere works with movies like “Avengers: Age of Ultron,” and most of the Star Wars movies. The exception is the original “Star Wars (Episode IV: A New Hope),” which is still owned by Fox.

Disney also offers Disney Movie Awards. You earn points by buying and registering Disney movies, and you can use those points toward free movies, toys, and other knick-knacks. You probably won’t get much out of it unless you’re a Disney fanatic or have a Disney-addicted child, but it’s a nice perk.

You can watch movies and manage your account on your iPhone or iPad with the Disney Anywhere app, but you don’t really need it, since your Disney movies should be available to stream in the built-in Videos app. (Or you can sync them to your device via iTunes, like any other iTunes Store movie.)

The only problem with Disney Movies Anywhere is that it doesn’t work with more movies! In an ideal world, the DECE companies would adopt the technically more successful Disney Movies Anywhere in favor of UltraViolet, although that may be a political non-starter. The other alternative is that the players behind UltraViolet could convince Apple, Amazon, and Google to get on board, but since that hasn’t happened already, it seems unlikely.