Making phone calls over Wi-Fi isn’t anything new — except to many iPhone users. Several years ago, T-Mobile pioneered a hybrid Wi-Fi/cellular calling option in a push to supplement its relatively small cellular network footprint. With home routers that optimized voice calls and special handsets, T-Mobile subscribers could shift usage of what were then expensive cellphone minutes to unlimited Wi-Fi calling.

Over the years, more carriers came on board, but Apple didn’t add support for making calls over Wi-Fi on an iPhone until iOS 8, and initially only for T-Mobile. Sprint flipped its switches later in iOS 8’s release cycle, and AT&T enabled it only after iOS 9 was released. Verizon just filed paperwork to offer the feature as well. (AT&T claims T-Mobile and Sprint violate the law by offering Wi-Fi Calling without providing adequate support for accessibility services.)

Again, this isn’t new to people who have had used it for years. But for the vast number of iPhone users who have experienced only AT&T’s and Verizon’s networks, the details are worth understanding.

While the iPhone 6, 6 Plus, 6s, and 6s Plus are supported by all three network operators that allow Wi-Fi Calling, check with your carrier about minimum iOS version and older iPhones.

Unified Phone Calling via any Network — Wi-Fi Calling is a particular sub-class of Voice over IP (VoIP) and Internet telephony. While services like Vonage offered a “real” (public switched telephone network or PSTN) phone number starting many years ago, and Skype and other mobile apps enabled voice connections that are phone calls for all intents and purposes for the last few years, Wi-Fi Calling ties directly into the existing cellular telephone infrastructure. (This is true in both iOS and other mobile platforms, including Android.)

The idea is that instead of having separate phone numbers and apps and choosing from which to originate calls, your iPhone handles all incoming and outgoing calls for a single number through its Phone app and related settings. With some cellular carriers, Wi-Fi Calling can relay from other devices so you can even place calls from a Wi-Fi-only iPad or iPod touch. You don’t need to know whether a particular call is using Wi-Fi Calling or the cellular network — it’s seamless and should only give you better performance, not worse.

When T-Mobile introduced its flavor of Wi-Fi Calling way back in 2007, it was trying to leverage what was then a very slender spectrum profile. Years earlier, to compete with carriers that had higher-speed networks and more coverage, T-Mobile had partnered with Starbucks and other locations to put Wi-Fi access in thousands of spots.

T-Mobile also lacked sufficient spectrum licenses to provide a consistent experience in homes and offices. Wi-Fi Calling was a good bridge. With a then-special Wi-Fi router that prioritized voice data using the relatively slow 802.11g standard, T-Mobile could let people make and receive calls at home, at work, and at Wi-Fi hotspots. They also didn’t count the calls against minutes used. (Carriers later started offering tiny cellular base stations — femtocells — that plugged into a Wi-Fi network and used licensed frequencies operated by the carriers, but that approach never caught fire because of the cost to consumers and poor quality.)

This goal continues to drive modern Wi-Fi Calling: carriers can’t always provide a great calling experience inside a home or office, and with so many customers, it’s guaranteed that a decent percentage will live and work outside strong coverage areas. My family once stayed in a house on Mount Desert Island in Maine that had no cell service at all but nonetheless boasted 8 Mbps/1 Mbps ADSL Internet service, even though we were deep in the woods. I have many friends who can barely make calls in their houses today, including one in the heart of a major residential neighborhood in Seattle.

Wi-Fi Calling thus leverages an alternate path to the same network. Since 2G cell standards emerged, mobile calls are all digital, anyway. As standards have progressed, the calls work more and more like any other data — though still tagged for priority through what’s often called quality of service (QoS).

(In a separate effort to improve mobile calling, all U.S. carriers are also moving towards Voice over LTE (VoLTE), in which voice calls use 4G LTE data networks to dramatically improve dynamic range, clarity, and consistency. Newer LTE phones support VoLTE, but carriers are still rolling out support city by city, and VoLTE between different carriers still doesn’t exist. When you get a VoLTE-to-VoLTE call, though, it’s almost shocking how much better it sounds — like talking on a good Skype connection!)

You don’t have to use Wi-Fi Calling, especially if you have a typical service plan that allows unlimited voice calls in the United States (and sometimes within and to other countries) and you never suffer from poor reception. However, if you have sketchy connectivity, or travel a lot, Wi-Fi Calling is a big advantage for ensuring that you can always make and receive clear calls.

This is especially true outside America’s boundaries with some carriers. T-Mobile charges nothing for incoming calls over Wi-Fi Calling, wherever you are, and counts minutes for calls placed to U.S. numbers, whether on U.S.-based Wi-Fi or elsewhere in the world, against plan minutes, which can be unlimited; Sprint is the same. AT&T, by contrast, is so far limiting calls to be received and placed when a customer is in the United States, Puerto Rico, and the U.S. Virgin Islands.
However, this seems likely to change.

Manage Wi-Fi Calling — Turning on Wi-Fi Calling is a low-stress operation. Here’s the procedure for AT&T it varies only a little for other carriers: 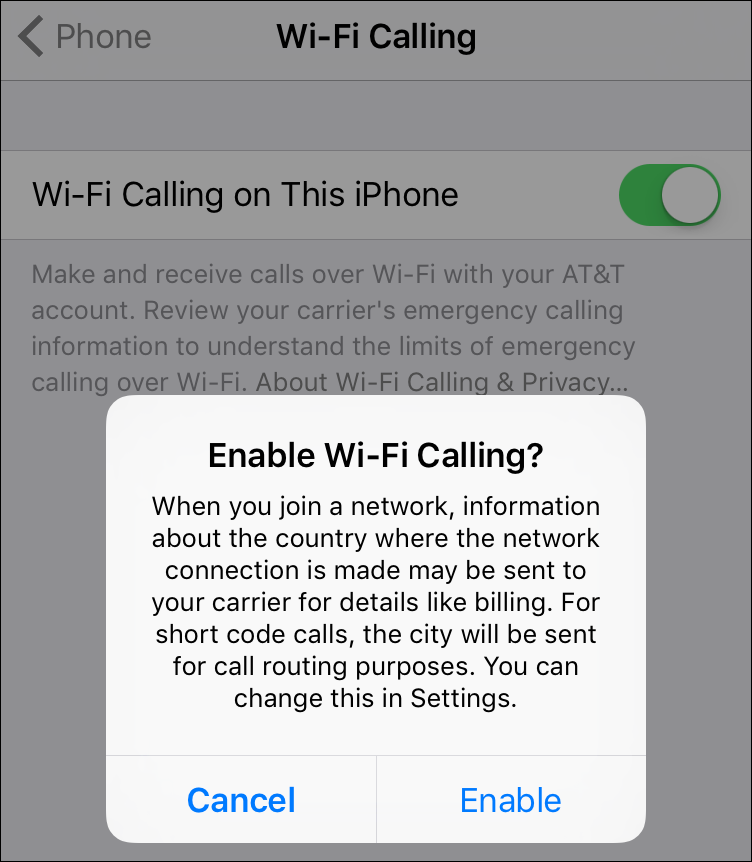 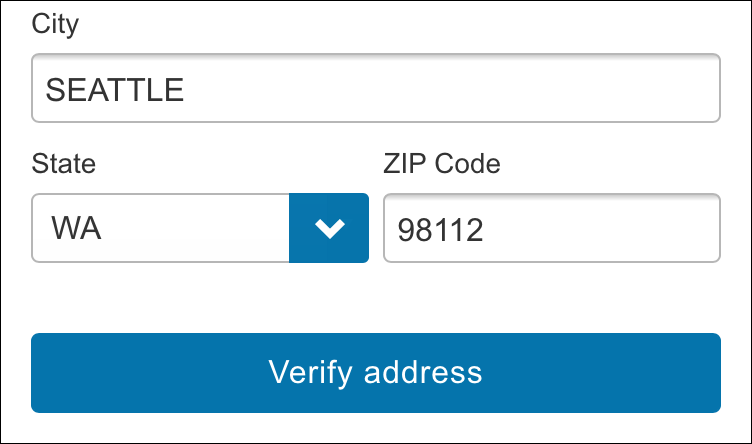 Wi-Fi Calling can take a few minutes to activate. When it’s ready, the text “Wi-Fi” appears in the status bar, between the carrier name and the Wi-Fi signal strength waves.

You can return to the same setting location to disable Wi-Fi Calling. I had to do this when my home Internet connection went wonky just before I switched ISPs. (Once I got my new ISP’s connection working properly, I re-enabled Wi-Fi Calling.) You may need to do the same if you find yourself on a Wi-Fi network with inconsistent service that causes phone calls to drop or suffer poor quality. You can also update your emergency address later on, should it change. 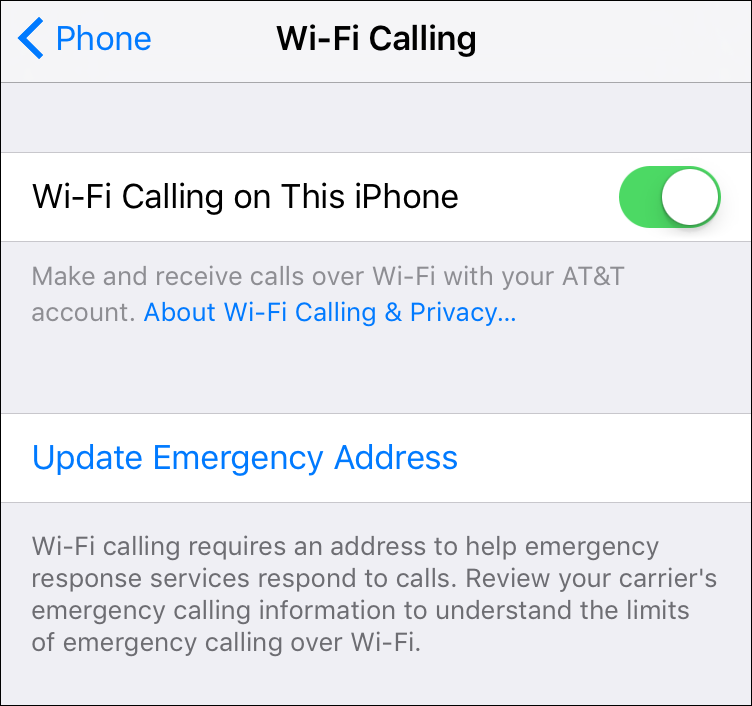 Beyond the iPhone, T-Mobile and Sprint let you relay Wi-Fi Calling from other devices; T-Mobile requires iOS 9.0 or later, while Sprint requires iOS 9.1 or later. That means you can place calls using an iPad, iPod touch, a Mac running OS X 10.11 El Capitan, or an Apple Watch with watchOS 2. The iPhone doesn’t have to be within range or even powered on, Apple says, except for calls originated from the Apple Watch. (This is an extension of a Continuity feature that allows placing and receiving cell-based calls via an iPhone, but works in only the specific carrier and OS combinations described.)

On your iPhone in Settings > Phone > Calls on Other Devices, you can choose whether to allow any relayed calling or not, and which devices. The Apple Watch can already place calls just by being paired with an iPhone. On the Mac, you use FaceTime to place audio calls by clicking the phone icon, just as if you were making a cellular call relayed through an iPhone. 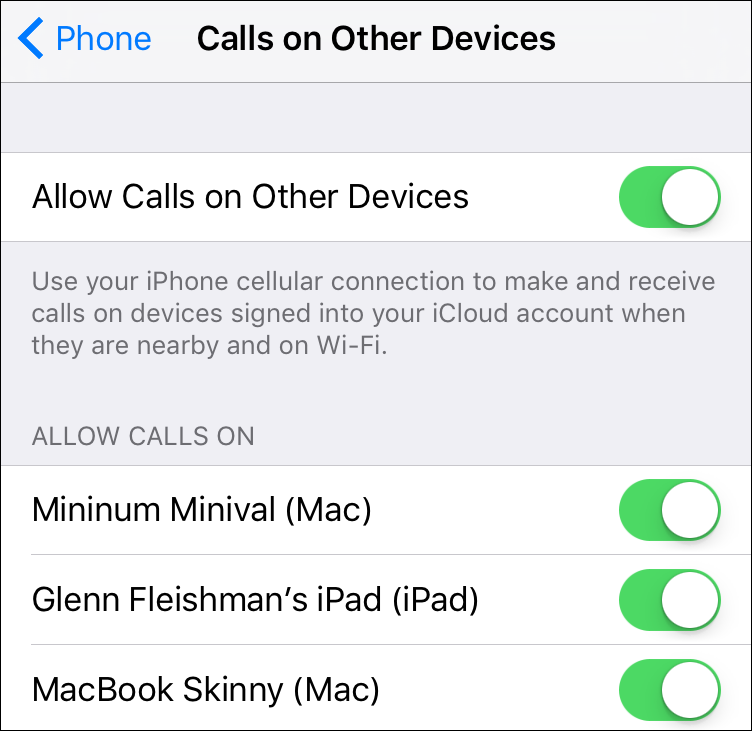 (A note on 911 emergency calling: 911 calls are routed over Wi-Fi only when a cellular connection can’t be made. The hierarchy, according to AT&T, is first cellular, then Wi-Fi plus your location information derived from Apple’s Wi-Fi location database, and lastly Wi-Fi plus your registered address — even if you’re not at that address, it’s the best information available. That may not sound ideal, but think of it this way: without Wi-Fi Calling, the 911 call would be entirely impossible to
make.)

The End of Voice as a Separate Thing — Wi-Fi Calling is a particularly old-school service, taking what began life as a switched-network, circuit-based hardware routing system (the PSTN) and dropping what is effectively a PSTN simulation into the Internet. It has taken a long time to arrive, especially given that we’ve had Skype-like equivalents for so many years, but it’s nonetheless welcome since Internet telephony remains fragmented and flaky.

I switched to making most office calls using Skype’s PSTN offering long ago. That service has only gotten better over time, and when integrated with Google Voice for forwarding, I seldom know from where a call originates. The call rings all over, and I pick it up wherever is convenient — on my Mac using a headset or an iPhone, via Skype or FaceTime or the Phone app.

The future of Internet telephony is the disappearance of voice as a separate service to think about. Wi-Fi Calling is an odd step in that direction, but it dissolves more of the boundaries between voice and data.

More about iOS Networking, Privacy, and Security — If you’re looking for more detailed information and step-by-step instructions for a wide variety of activities related to this topic, take a gander at my latest book, “A Practical Guide to Networking, Privacy & Security in iOS 9,” which the fine folks at Take Control have available for sale for $15.

The 177-page book covers Wi-Fi and Bluetooth configuration and troubleshooting, working effectively on cellular networks (including avoiding overage fees), configuring your iOS device for the greatest amount of privacy protection, working with content-blocking Safari extensions, and managing security settings from everything ranging from VPN clients to Find My iPhone.

Comments About Turn on Wi-Fi Calling in iOS 9