Unless you’ve been sleeping under a rock, you’re probably aware that the first new Star Wars movie in a decade is just around the corner. “Star Wars: The Force Awakens” (which I’ll abbreviate as TFA for brevity’s sake) opens 18 December 2015 in the United States, though early screenings are scheduled for the night before. With Disney now owning the franchise, fans are hoping that a new creative team will bring the series back to its former glory.

With the emergence of the iPhone, iPad, and Apple TV, the world has changed since 2005’s “Star Wars Episode III: Revenge of the Sith.” If you’re eager to scratch your Star Wars itch, Apple’s ecosystem offers many ways to do so.

Of course, you don’t necessarily need any of the following to enjoy the movie, but (to paraphrase Hunter S. Thompson) once you get locked into a serious Star Wars obsession, the tendency is to push it as far as you can.

The Movies — Earlier this year, all six Star Wars films were made available in iTunes. The movies are $19.99 each, or you can purchase them all in a bundle for $99.99. The good news is that they’re beautifully remastered in 1080p. The bad news is that they’re the “special” editions, which feature many changes that anger fans.

Star Wars purists might be happier with the legally gray “Despecialized Editions” of the original trilogy, which crib from multiple sources to restore the original movies in high definition. If you’re seeking these versions out, I’m afraid we’ll have to leave you to your own ingenuity. (Try searching your feelings — and by “feelings” I mean Google.)

As for the upcoming movie, tickets went on sale last month, and as ridiculous as buying movie tickets two months in advance sounds, many showings are already sold out! So if you want to catch TFA in its opening weekend, check out the Fandango iOS app, with which you can buy your tickets, store them in the Wallet app, and even display them on your Apple Watch.

Television — Disney and Netflix have a partnership, which means that several Disney films are available on Netflix, but the Star Wars movies aren’t among them (although there are rumors that they will be at some point).

But there’s still plenty of Star Wars content to be found on Netflix in the form of “The Clone Wars,” an animated movie and subsequent TV series that takes place between Episode II and Episode III.

Following “The Clone Wars” can be confusing, because the episodes and introductory movie aren’t in chronological order. Fortunately, there is an official chronological episode guide to help make sense of things.

Note that “The Clone Wars” is a kids’ series and is linked to the widely panned prequel trilogy. But some of the stories are excellent, and the episodes are often less childish than the prequel films. “The Clone Wars” also introduces two of the more interesting characters in Star Wars lore: Asaj Ventress — a dark side assassin — and Ahsoka Tano — Anakin Skywalker’s Jedi apprentice.

“Star Wars Rebels” is another animated series that focuses on the rebellion against the Empire. Sadly, it’s not yet available on Netflix, but if you subscribe to Disney XD via a major cable or satellite provider, you can watch recent episodes in the Disney XD app for iOS and Apple TV. Otherwise, you can purchase the series on iTunes, beginning with the short film “Spark of Rebellion.”

Books and Canon — Over the years the Star Wars universe has been expanded in novels, short stories, and comics, forming what was known as the Expanded Universe (EU), with each entry having varying degrees of canonicity (“canon” being the things that officially happened in this fictional universe). All of the Star Wars novels can be found in the iBooks Store or the Kindle Store (you can’t buy Kindle books from the iOS Kindle app, but you can buy them in Safari which can deliver them directly to the Kindle app).

Diving into the EU can be daunting, so when Disney acquired the franchise it simplified things by declaring almost all of the EU to be non-canon. This angered fans of works like Timothy Zahn’s Thrawn trilogy, but it cleared the way for filmmakers to have creative freedom in the new movies. And frankly, a lot of the EU was terrible.

Any Star Wars story that’s no longer canon has been placed under the “Legends” banner. Here’s what’s left of the official canon:

Wookiepedia, a Star Wars wiki, has a complete timeline of the current Star Wars canon.

If you’re trying to figure out which new-canon Star Wars novels are worth reading, publisher Del Rey has released two free samplers: one for the 2014 titles (available both from Amazon and the iBooks Store) and another for the 2015 titles (Amazon, iBooks Store) that
can help you decide. These novels take place at various points in the Star Wars timeline. For instance, “Dark Disciple” takes place during the prequel era (and you should probably watch “The Clone Wars” series first), “Tarkin” and “Lords of the Sith” take place between the prequels and the original trilogy (I recently finished “Lords of the Sith” and it’s quite good), and “Lost Stars” takes place during and after the original trilogy.

One Star Wars novel you won’t find in the samplers is Chuck Wendig’s “Aftermath: Journey to The Force Awakens” (Amazon, iBooks Store). It has the distinction of being the first novel to take place entirely after the original movie trilogy. But it’s also received some abysmal reviews on Amazon, due to Wendig’s uneven writing that often mixes up both tenses and details. If you’re a hardcore Star Wars fan, the interludes — which break from the mediocre plot to show events in the galaxy after the Empire’s fall — are interesting, but I’m not sure if
they’re worth the money.

Comics — Disney owns Marvel Comics as well as Star Wars, so if you subscribe to Marvel Unlimited, you can read just about every Star Wars comic ever made, dating back to the late 1970s. Of course, most of these now fall under the Legends label, but that doesn’t mean they’re not entertaining.

I shared a middling opinion of Marvel Unlimited in “FunBITS: Marvel Unlimited App a 97-pound Weakling” (24 May 2013), but the service has improved dramatically in the two years since I reviewed it. The app is now fast and stable, saves your place in comics, and the selection has improved dramatically. If you’re a comic fan, it’s easily worth the $9.99 per month, and the $69 annual subscription is an even better deal (pray they do not alter it).

There are two comic series available in Marvel Unlimited that will be of interest to Star Wars historians: the first, “Splinter of the Mind’s Eye,” is a graphic adaptation of the 1978 novel, which itself was planned as a possible sequel to Star Wars if the movie flopped, and the second, “The Star Wars,” is a comic adaptation of one of George Lucas’s early drafts, with art based on Ralph McQuarrie’s concept art. While the latter bears similarities to the final film, it’s a much different story than the one that appeared on screens in 1977. Both are fascinating looks at what could have been (and both are testaments to the importance of editorial revision). Both of these fall under the Legends banner and are not canon.

If you’re interested in following the new Star Wars canon, then you’ll want to check out the newer titles available on Marvel Unlimited: “Star Wars,” “Darth Vader,” and “Princess Leia,” which all take place between Episode IV and Episode V. There’s also “Kanan: The Last Padawan,” which serves as a prequel to “Star Wars Rebels.” And, there’s a pre-Disney comic miniseries in Marvel Unlimited that somehow escaped Disney’s canon purge, “Star Wars: Darth Maul: Son of Dathomir,” which takes place after “The Clone Wars” series.

Marvel Unlimited restricts its offerings to comics that are six months old and older, so to read newer titles, like “Chewbacca” and “Lando,” you’ll want to download the Marvel Comics iOS app, which has them available for purchase. It’s powered by the excellent ComiXology engine, but unlike the main ComiXology app, it still offers in-app purchases.

If you’re preparing for TFA, you should check out the four-part series “Star Wars: Shattered Empire” in the Marvel Comics app. It takes place after “Return of the Jedi” and offers some backstory on Poe Dameron, one of the main characters in TFA. Unfortunately, because the Marvel Unlimited app restricts its offerings to material that is at least six months old, I don’t expect the “Shattered Empire” series to appear in that app before the movie comes out.

Games and Apps — The iOS app store has more Star Wars games than you can shake a lightsaber at, but the only one I can wholeheartedly recommend is Aspyr’s $9.99 port of “Knights of the Old Republic.” In the time since my review of it appeared (see “FunBITS: Star Wars: Knights of the Old Republic for iPad,” 6 December 2013), Aspyr has added support for the iPhone, cloud saves, and MFi controllers. It’s not only one of the best Star Wars games of all time, it’s one of the best games of all time, period.

However, Disney’s official Star Wars app for iOS is worth the free download. It features Star Wars news, emojis, weather forecasts, a sound board, and more. It also features a nifty Force Trainer augmented-reality game, where you use your iPhone as a lightsaber to deflect blaster fire from a training droid. 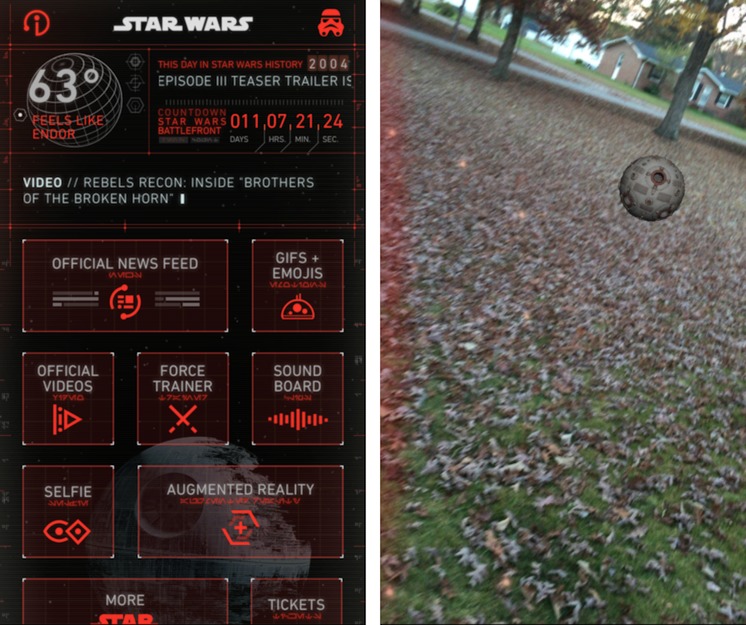 Creative fans will love the most recent update to Action Movie FX, since it now includes Star Wars effects that you can place in your own videos. The app offers one Star Wars effect for free, and others are available as in-app purchases. Here’s a video of BB-8 zapping my pickup truck.

And here’s a video of a battle taking place in my front yard.

BB-8 — “The Force Awakens” introduces a new droid character, BB-8. This character differs from past Star Wars droids in that it rolls around on a ball instead of using legs, wheels, or tracks. And thanks to robotics company Sphero, you can own your own BB-8; it’s available for $149.95 from Amazon or the Apple Store, and it’s certain to be one of the hottest toys this holiday season. (They’re often backordered online, but I’ve found several in brick and mortar Apple Stores.)

Why is Apple selling a toy robot? It’s because you can control BB-8 with an iOS app. With the app you can steer BB-8 manually, give voice commands, put it into an automated patrol mode, and record and playback “holographic” video messages. Serenity Caldwell recorded a video overview for iMore.

True, the BB-8 toy does have some disappointing aspects. It’s far smaller than its movie counterpart, being about the size of a softball. It’s also completely dependent on the iOS app, and it can’t do much unless the app is active. Despite that, it’s still the coolest Star Wars toy ever.

May the Apps Be With You — Like I said, you don’t need all of this to enjoy the movie, but to generations of fans, Star Wars is more than just a movie. In its 38 years of existence, the Star Wars mythology has grown to rival that of Tolkien’s Middle Earth or even the pantheons of ancient times. Thanks to Apple’s technology, there’s never been a better time to be a Star Wars fan.

Comments About FunBITS: Preparing for “Star Wars: The Force Awakens”