This year’s special activities included a group viewing of the new “Steve Jobs” movie (complete with audience talkback and stories of meeting Jobs), drone test flights, a 2016 Honda Accord Hybrid with Apple’s CarPlay working in the dashboard, a murder mystery dinner theater, props from the 2013 movie “Oblivion” courtesy of the Hollywood Sci-Fi Museum, and an exhibit by Jet Propulsion Laboratories of a huge stereoscopic poster of the surface of Mars from pictures taken by NASA’s Curiosity rover and a full-size 3D-printed Martian meteorite based on photographs taken by the Opportunity rover. And of course, another installment of our Take Control Tech Up game show, which tested attendees to see how much they knew about Apple’s products, technologies, and history.

There’s no telling what MacTech organizers Neil Ticktin and Andrea Sniderman will come up with for the 2016 version of this LA-based conference, but if you’re considering attending, put November 16th through 18th on your calendar. Note that a variety of optional pre-conference certification workshops will likely happen on the 15th. And if you’re really certain you want to attend, the lowest price you’ll see — $899 ($700 off the $1,599 normal price) — is available only through 30 November 2015.

Of course, the meat of the conference was dozens of technical and thought-provoking sessions for IT professionals, consultants, and techs. Sessions ranged from the introductory and foundational, to deep dives and hands-on labs, concluding with an apt closing keynote from Andy Ihnatko on how best to act on all the new ideas generated by attending a conference. For those who wanted even more, MacTech Conference featured six full-day pre-conference workshops, including Business Strategy, Security, Project Management, Wi-Fi Design & Troubleshooting, Command Line, and a Swift 2 Rapid Start.

Also before the main conference, MacTech continued to offer attendees Apple Certification Exams with testing partner Creative Resources. The largest pre-conference activity was the updated Microsoft Office for Mac and iOS Accredited Support Professional course and exam, which provided training and certification on Office 2016 for Mac and Office 365. According to Neil Ticktin, the three-year-old accreditation program is the fastest-growing and most attended credential program for Apple IT pros and consultants.

While there’s no way to cover the entire conference — too much happened for that — I want to share three highlights: a new external storage solution, a piece of software for managing serious projects, and a trend in technical support.

OWC Envoy Pro mini — Among the vendors displaying their products at MacTech was hardware manufacturer and reseller OWC. The company is known largely for its storage and memory products, although it also recently purchased SoftRAID, which lets you create a RAID from a variety of external disks. But that’s a story for another time — the OWC product that most struck me at MacTech was the Envoy Pro mini, which looks like a beefy USB thumb drive and plugs into a USB port just like a thumb drive. However, it’s really
a full-fledged, bus-powered SSD that comes in 120 GB ($109.75) and 240 GB ($179.99) sizes and provides up to 427 MBps throughput via USB 3.0 — OWC says it’s nearly twice as fast as the average thumb drive. If you need lots of storage that’s portable, fast, and rugged, it’s worth a look. 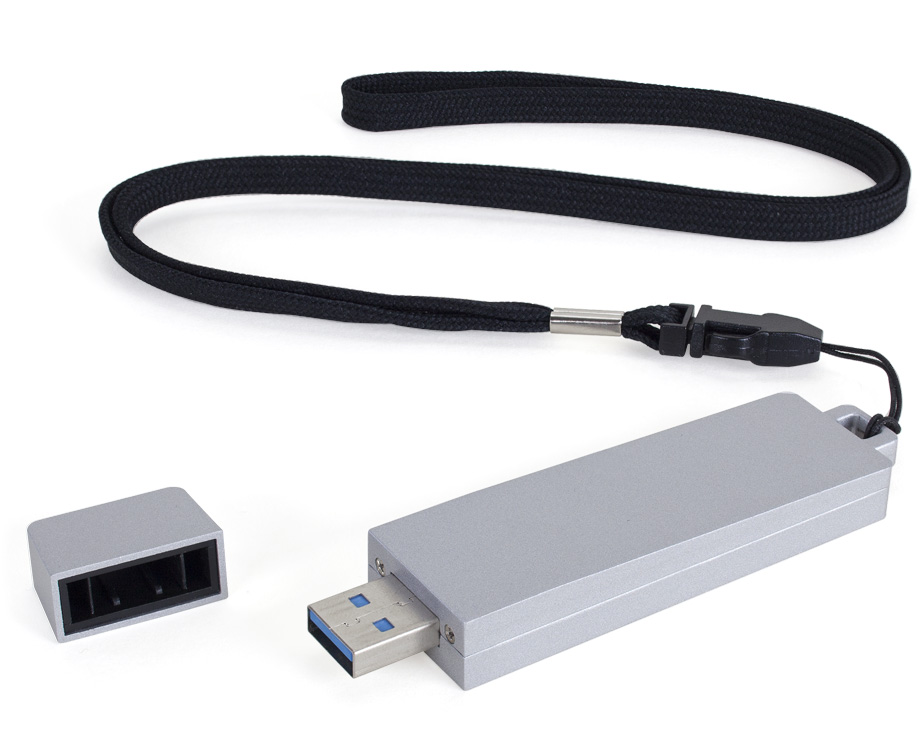 Merlin Project — It may not be obvious from the outside, but as editor in chief of Take Control Books, Tonya is constantly juggling the schedules for numerous books. She works hard to coordinate authors and editors so no time is wasted, bringing in tech editors and other help as necessary, and she does it for many titles at once, all while taking her own edit passes to ensure series consistency. Keeping all these balls in the air has become increasingly complex, so it was a happy coincidence to discover Merlin Project, the latest release of the professional project management software from the
German firm ProjectWizards. It was demoed for us by CEO Frank Blome, whose 25 years of professional project management experience spans companies of all sizes, from small IT shops to worldwide groups such as Bertelsmann, before he founded ProjectWizards in 2001.

As projects grow in scope and importance, simple task managers aren’t sufficient, because they have no way to represent how activities are dependent on one another (editors can’t start until authors are sufficiently done), how resource constraints (such as an editor’s time) may affect completion dates, or how scheduling changes in one project may impact others (if an app we’re covering is delayed, that may push one book out, freeing up a release spot for another). That’s where professional project management software earns its keep — it’s more effort to set up at first, but that pays off in reduced stress and crises later on if something doesn’t go as planned. And let’s face it, plans seldom proceed unaltered.

Released in January 2015, Merlin Project is a thoroughly modern-looking application, with an impressive level of flexibility. It didn’t hurt that everything we saw was being shown by the guy who probably knew Merlin Project better than anyone in the world, but Frank Blome had a ready answer for any question we posed, showing us how Merlin Project could help with both an individual book project and with the coordination of multiple simultaneous projects. I won’t go into it further here, since the app is incredibly deep, but if you aren’t as in control of your projects as you would like, check out the 30-day free demo version of Merlin Project. A full version costs $299, but based on what I saw, that’s cheap for what it provides.
This is serious software. 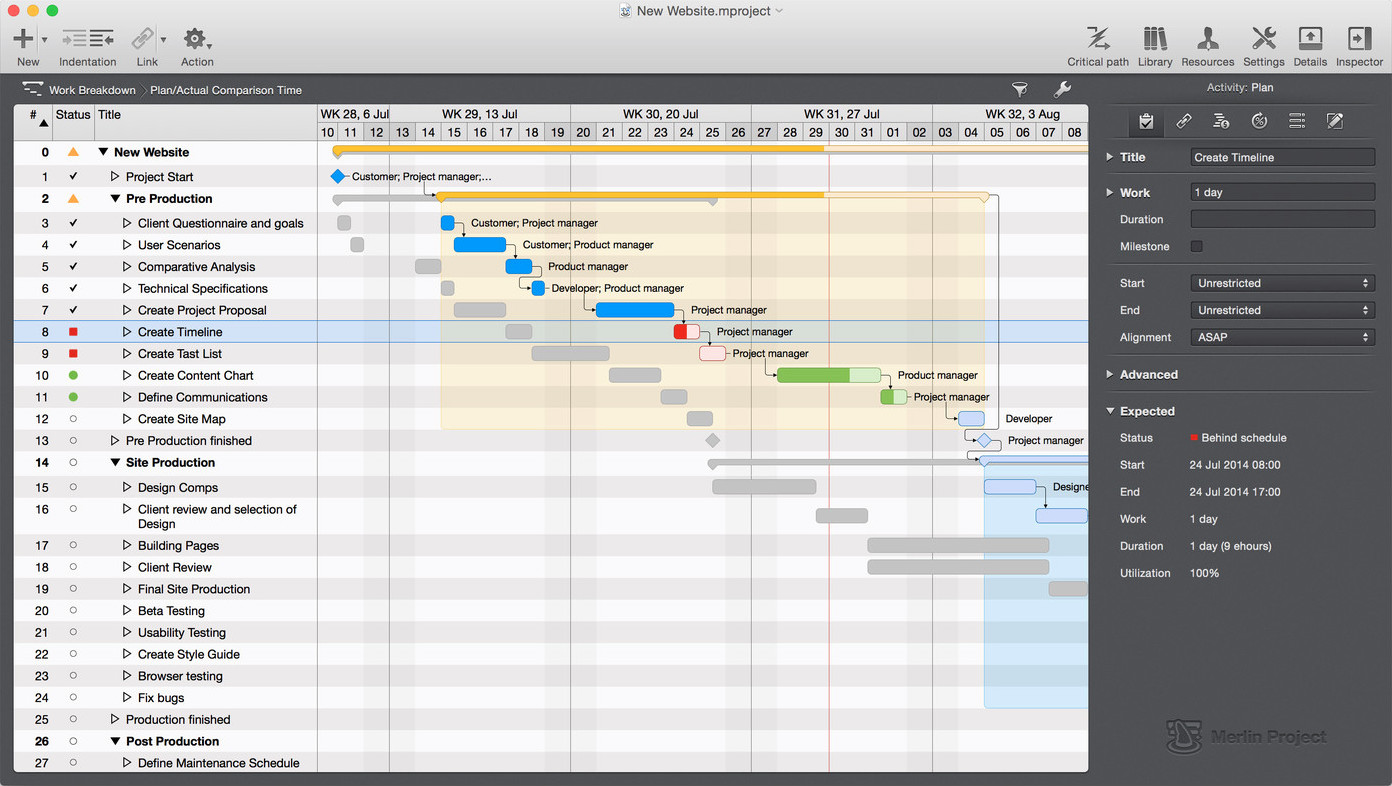 Proactive Support with Watchman Monitoring and Gruntwork — Apple has repeatedly proclaimed “It just works” on various keynote slides, but that’s an exaggeration at best. Yes, many things do just work, but the mere existence of Apple’s own Genius Bars and the firehose of complaints on the Apple Support Communities forums show that “it” often doesn’t just work, whatever it is. Nothing is perfect, and problems crop up regularly for Mac users of all stripes. Worse, while many things have become easier and more reliable over the years, today’s solutions often require significantly more knowledge and technical experience than the average user is likely to
have.

That accounts for the rise in popularity of what’s becoming called “proactive support.” Rather than wait for a problem to reveal itself, which often happens in ways that obscure the actual cause, proactive support software can identify and often repair problems before they get bad enough to cause crashes or other inexplicable behavior.

Proactive support software isn’t something individual users install on their own computers. Instead, it’s installed by a consultant acting as what’s called a “managed services provider” or MSP. Companies who don’t want to pay for their own internal IT support personnel pay a small monthly fee per computer, and the MSP monitors each machine, scanning for malware, tracking configuration and inventory, verifying backup status, resolving small problems before they get worse, and vetting and installing updates. That’s all done automatically, and consultants I spoke with at MacTech told stories of identifying failing hard drives and warning clients of malware infections. Obviously, some problems require hands-on troubleshooting,
but the consultants said they can work much more quickly in person when they know that a disk verification has already run, that permissions were repaired, and that all the key software has been updated.

On the monitoring side, the package all the MSPs I spoke with use is called Watchman Monitoring. On client Macs, it runs as a lightweight agent that uses minimal resources when it runs hourly, so it doesn’t disrupt users. Watchman Monitoring can keep track of server availability and utilization, backup status, disk space and I/O errors, RAID issues, network performance, system performance, malware checking, and configuration, displaying all this information on a Web-based dashboard.

The other piece of the software puzzle I saw at MacTech is the maintenance software Gruntwork, from Mac-MSP. Like a screensaver, it runs a wide variety of background tasks when the Mac is idle, so it doesn’t get in the way of the user. It can scan for and remove malware, repair permissions, clear caches, test memory, and more, even integrating with Watchman Monitoring. Key among Gruntwork’s features is its capability to update nearly 200 software packages, something that it does intelligently based on Mac-MSP’s testing (they have hundreds of their own clients, so they don’t release anything without making sure it won’t have adverse
consequences). So, for instance, Gruntwork won’t provide an operating system update if Mac-MSP knows it will cause problems for other mission-critical apps.

Managed service providers seem to charge $10 to $20 per month per Mac for these proactive support plans, although the costs go up for high-end consultants who bundle in even more services, something I heard referred to a few times as a vCIO, or virtual chief information officer. It makes sense — paying even $30,000 per year for an MSP to act as a vCIO represents a huge cost savings over hiring a dedicated employee to perform the same tasks.

What I haven’t seen yet is managed services making inroads into the home market, where there are vast numbers of users who need technical support but who may not wish to pay $50 to $100 an hour for on-site visits by a consultant, particularly for things that could be resolved automatically or remotely. I’m always troubled by the pain our non-technical acquaintances suffer when things go wrong on their computers, largely because they’ve never done any preventative maintenance or even set up a solid backup strategy. How about you — would you or people you know be interested in a managed services plan if such a thing were generally available?

That’s MacTech Conference in a nutshell — being exposed to interesting products, people, and ideas, and having that raw material trigger new thoughts. The conference has found a permanent spot on our calendar, and I’d encourage anyone involved in the IT world to check it out next year as well.