Wireless keyboards have several advantages. One is to get rid of cables snaking between your computer and peripherals. Another advantage, and the one that made me look into the field several months ago, was to free up one of the four USB ports on my Mac mini. With two external hard drives, an external DVD drive, a ScanSnap scanner, and a webcam, my devices are always fighting for port space. (And yes, I know I could attach a USB hub, but they come with their own issues.)

But my experience with Apple’s original wireless Magic Trackpad was that I was replacing its batteries about every 3–4 weeks, with the low-battery nag starting even before that. The thought of having one more set of batteries to fuss with was a showstopper for me.

So I thought, “Wouldn’t it be great if there was a solar-powered wireless keyboard? That would be perfect!” Sure enough, a little searching revealed just such a keyboard: the Logitech Wireless Solar Keyboard K750. 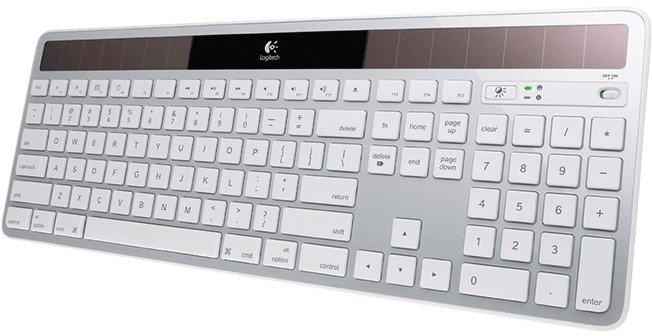 At $59.99, it’s not an entry-level keyboard, though it’s still quite a bit cheaper than Apple’s new Magic Keyboard (see “Apple Adds Retina Displays to More iMacs, Updates Input Devices,” 13 October 2015). Regardless, my old wired Apple keyboard (one of the full-size keyboards encased in clear plastic) was suffering from sticky keys and showing other signs of aging, so it needed replacing anyway.

But before I clicked the Buy button, I read some reviews and was crushed to stumble on the fact that “wireless” didn’t mean Bluetooth, but rather a proprietary Logitech transmission protocol that required a USB dongle plugged into the Mac, defeating most of my goal in going wireless!

Down but not out, I went on a mission to find a Bluetooth alternative, and I found what seems like a perfect one, sort of: the Logitech Wireless Solar Keyboard K760. When I found a “marketplace” merchant at Amazon selling it for $57.48 shipped, I was sold. The only problem? As far as I can tell from Logitech’s Web site, the K760 isn’t being made any more, which means that the supply is probably limited, and the pricing may vary widely. 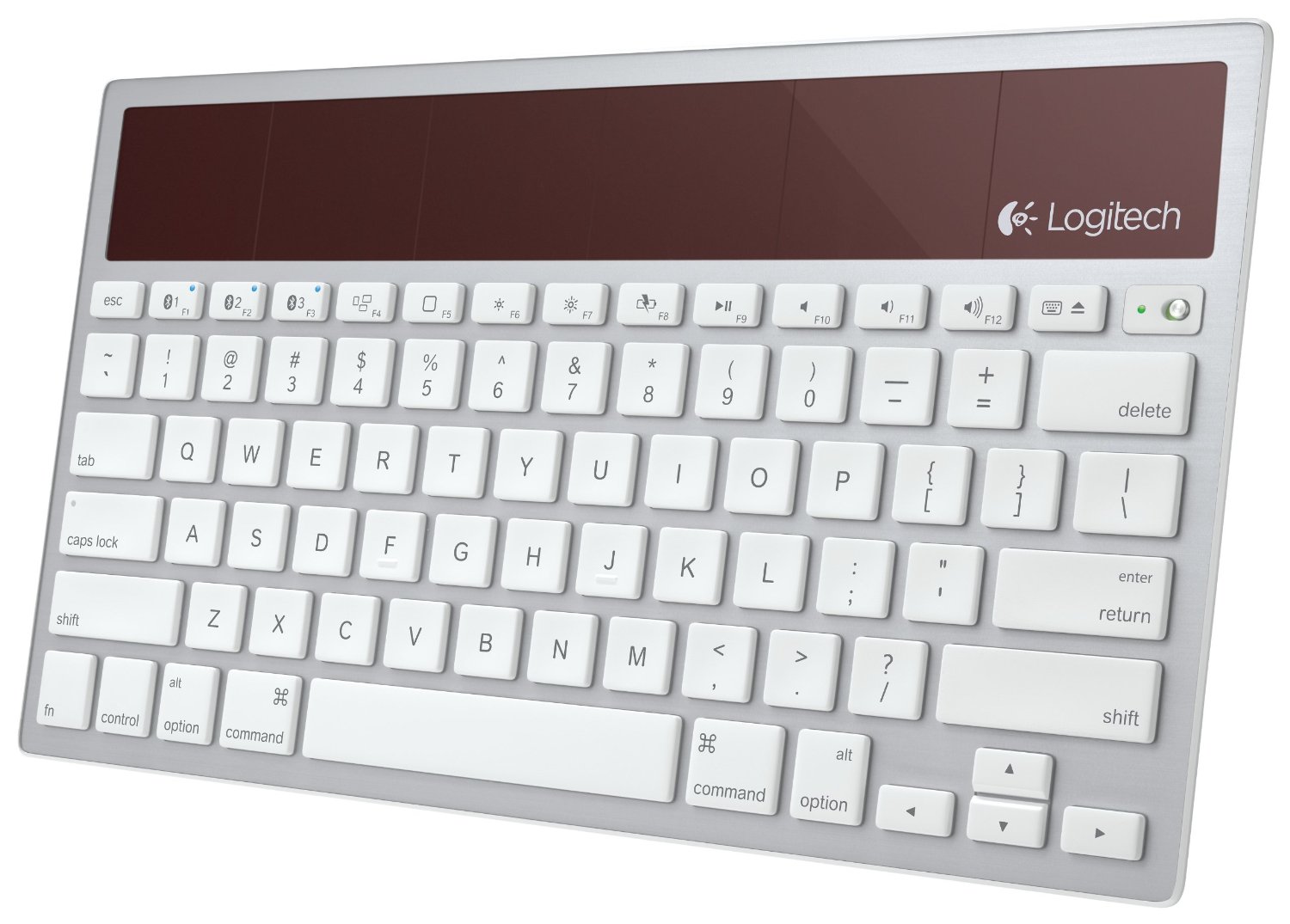 Hands on with the K760 — Made specifically for the Mac, this keyboard has a look and feel that makes Apple users feel instantly at home. It paired seamlessly with my Mac mini. And with Volume, Mute, Play/Pause, Mission Control, and other familiar function keys working out of the box, I was impressed with Logitech’s attention to the needs of the Apple community.

I also appreciate that it can remain paired with two additional Bluetooth devices and switch seamlessly between them via the F1, F2, and F3 function keys. I paired it with my MacBook and my third-generation Apple TV with no hassle. I also connected it to my iPhone, where it can even Show/Hide the keyboard (via the Eject key) or “press Home” via F5.

Given that it’s solar-powered, you might wonder how the K760 performs in the dark. Thanks to the internal battery that charges from either daylight or artificial light, the keyboard has worked fine for me during late nights in the dark. Online specs and reviews suggest it can run for a month in complete darkness.

I can’t compare the feel of typing on the K760 to Apple’s recent keyboards, since the one I replaced was so old, but it’s fairly similar to my MacBook’s keyboard. In a 2012 Macworld review, Dan Frakes commented that he preferred the K760’s keys to those on Apple’s then-current keyboards. Acknowledging that how a keyboard feels is intensely personal, I like the feel of the K760.

My only disappointment is that, unlike its non-Bluetooth sibling K750, the K760 does not include a numeric keypad. Why Logitech’s product design team chose to make the non-Bluetooth model include a numeric keypad and the Bluetooth model leave it out is a head-scratcher for me, and when I approached Logitech with the question, they were no help. Regardless, if the numeric keypad is important and you can spare a USB port for the wireless dongle, I’d encourage you to consider the K750, which is both cheaper ($59.48 at Amazon now) and still listed on Logitech’s site.

A Day Late and a Dollar Short — Of course, Apple just announced a revised lineup of its keyboard, mouse, and trackpad products with features that appear to suggest that the company finally realizes how bad the battery problem is. Unfortunately, Apple’s solution was to make the battery rechargeable via a Lightning cable rather than to recharge by solar. So even though Apple claims the devices will run for at least a month between charges, you must still add them to your chore list of battery-powered devices that need to be cabled and charged. It’s far less trouble than replacing batteries or fussing with rechargeable batteries, but still requires more attention and
interaction than the K760’s solar solution.

Considering that Apple’s Magic Keyboard costs $99 and can’t pair with and switch between multiple devices, I’d still recommend Logitech’s K760 for anyone but those looking for the precise look and feel of Apple’s products.

Logitech: A Logical Choice — If you want a Mac-friendly keyboard that you’ll never have to plug in or replace batteries for, check out the Logitech K760. And if a numeric keypad is a must, you can spare a USB port, and you have no need to pair the same keyboard with an iPhone, iPad, or other device, give the Logitech K750 a try. They’re both wireless, with no strings attached. Here’s hoping that Logitech releases an updated version of the K760 soon, because it’d be sad if such a great design was lost in time.

Comments About Logitech K760: A Wireless Keyboard with No Strings Attached