Apple’s trio of desktop input devices had, until recently, been getting a bit long in the tooth. The company’s Wireless Keyboard and Magic Mouse were released way back in 2009, an eternity ago in technology terms. The Magic Trackpad was only about a year younger.

And while the peripherals worked perfectly well, there were little problems that begged to be addressed. How many Magic Mouse users felt like screaming when they couldn’t get that little metal battery-compartment lid to stay on? How many cursed when the AA batteries inside leaked chemicals?

These gadgets needed to incorporate new technologies, too. The Magic Trackpad lacked the Force Touch features found on newer MacBook trackpads, for one thing.

Besides, Apple’s input devices had far from universal appeal – and some longed for radical redesigns. How about a keyboard that was not so aggressively minimalist, or a mouse that was more comfortable to hold?

Those longing for major overhauls were surely disappointed. The Magic Mouse 2 is all but identical to its precursor. The Magic Keyboard, though featuring a slightly different appearance, remains aggressively minimalist. The Magic Trackpad 2 is the most changed in shape, look, and functionality, largely for the better.

The trio of upgraded input devices have one major new feature in common: they boast built-in batteries, which you recharge with a Lightning cable. This makes the devices more Apple-centric than ever before, since they also pair with El Capitan-equipped Macs via that USB-to-Lightning cable (although old-school Bluetooth pairing with other computers is still possible).

These peripherals are quite different from their precursors in some ways, yet they retain their old personalities. Is that good, or bad? You have to decide this for yourself, perhaps after a trip to the local Apple store for a test drive.

I haven’t been an Apple-peripheral user, and the upgraded devices likely won’t convert me, but I know others who will love the new versions. 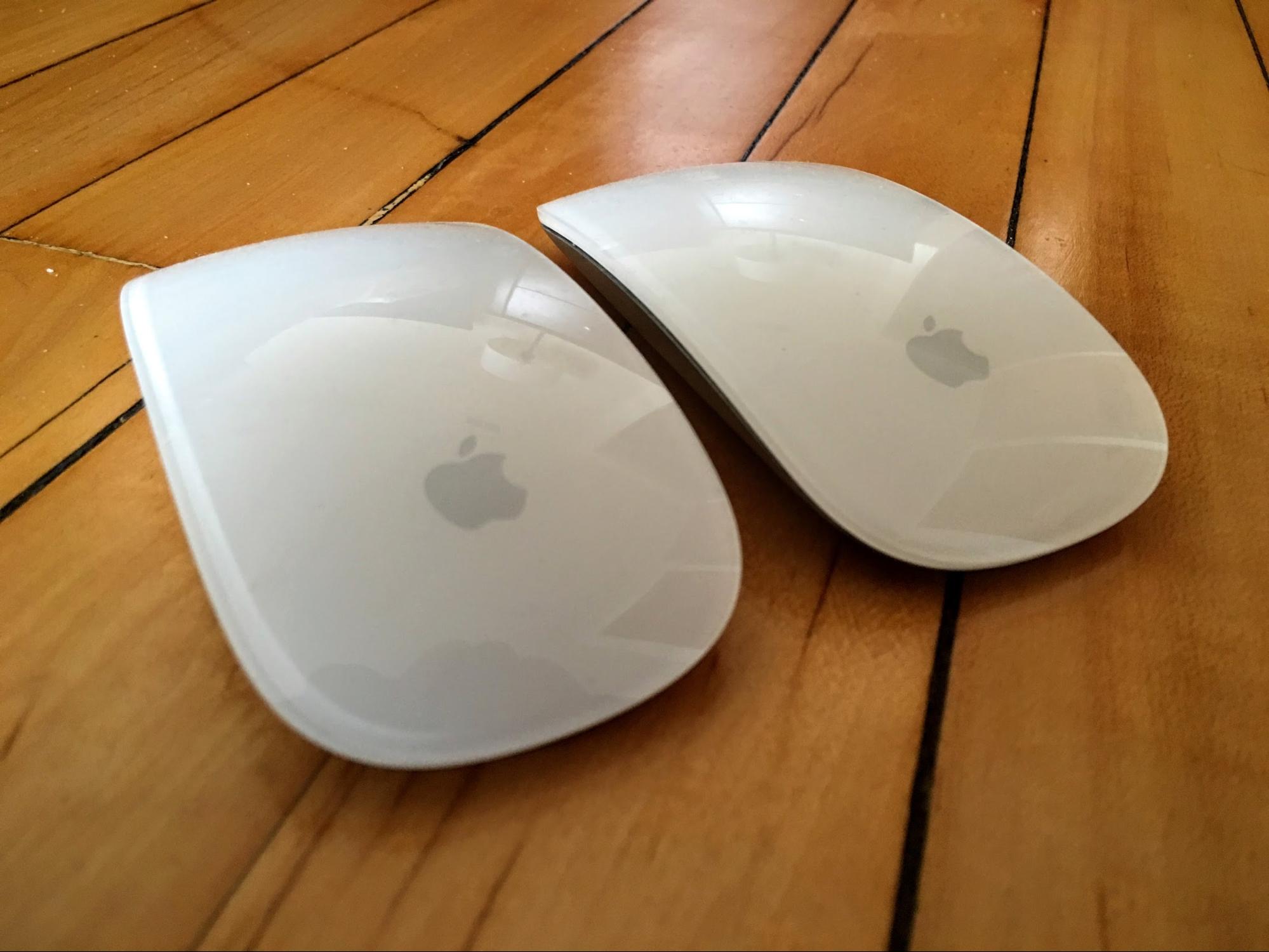 The big difference is underneath. Apple has done away with the compartment for two AA batteries, along with that troublesome lid, and left the bottom a mostly smooth surface, except for the Lightning port, the familiar plastic rails, the optical sensor, and the power toggle. 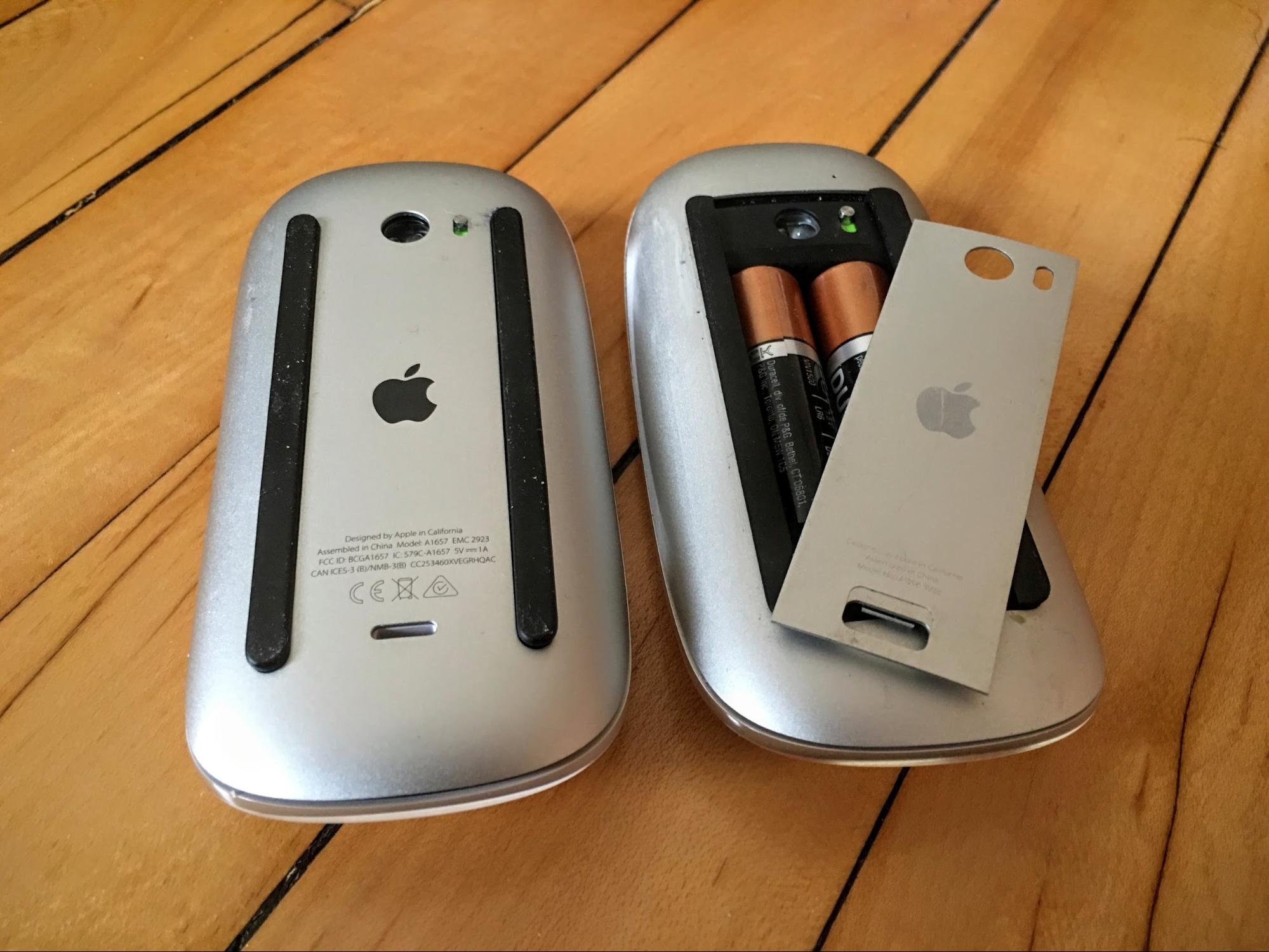 Pairing with a Mac occurs via that physical Lightning connection, though it operates wirelessly via Bluetooth thereafter. Switch the mouse on, plug it in, and pairing happens in a second or two. In my tests with a Magic Mouse 2 and several Macs, this happened reliably. The subsequent wireless connection proved dependable, as well.

The Lightning port is also used for charging. Some regard the port’s positioning on the mouse’s underside as problematic since the device cannot be used while physically connected to a Mac for charging.

I’d compare this to devices like my Logitech MX Master that have a micro-USB port on the nose – that is, the part pointing toward the computer – which turns them into wired input devices that can be used while tethered and charging. 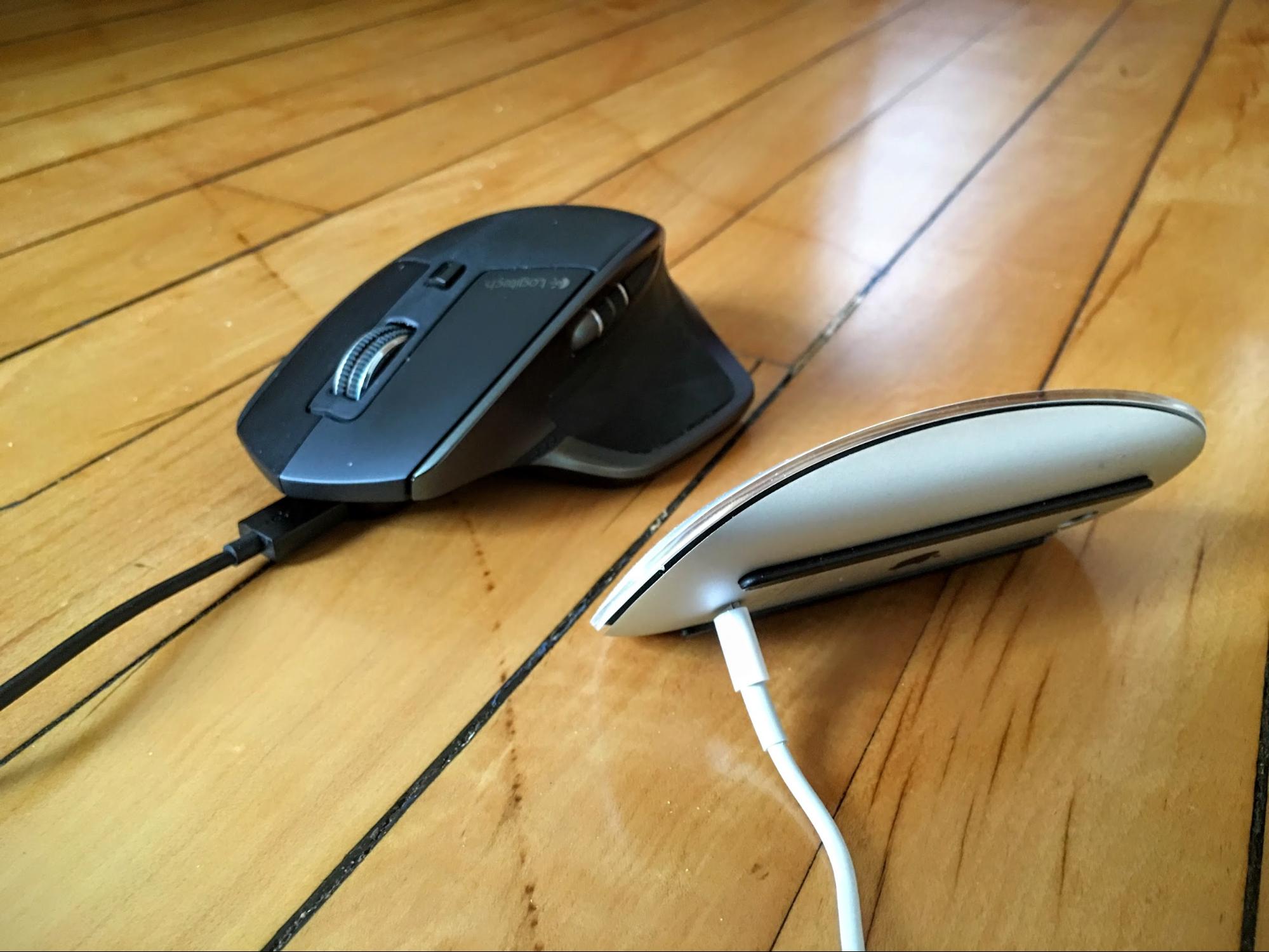 Apple and other Magic Mouse 2 advocates say the Lightning port placement is a non-issue since users can, in a pinch, get about 9 hours of continual mouse use with 2 minutes of charging. I agree: the port’s placement is not a big deal. Plug it in, take a snack break, and pick up where you left off when you get back.

A fully charged Magic Mouse 2 reportedly functions for about a month.

The Magic Mouse 2 otherwise looks and works like its precursor, with the same multi-touch gestures via its smooth top, the same low-slung design with the sharp edges that some dislike, and so on.

The Magic Mouse 2 requires OS X 10.11 El Capitan, but that’s only if it’s being paired with a Mac via the Lightning method. I had no trouble connecting it to a Windows-based Surface tablet using regular Bluetooth pairing, and this would presumably work with older Macs.

Those who love the Magic Mouse will have no difficulty using the new, all-but-identical model. Those who consider it an annoying rodent will dislike the new model just as much.

Magic Keyboard ($99) — Apple’s updated keyboard, unlike its new mouse, can be distinguished from its precursor at a glance.

Keys are flatter, with less throw, much like the keys found on the 12-inch MacBook. The function keys are now full-size, unlike the half-size variations on the old Wireless Keyboard. So are the left- and right-arrow keys on the Magic Keyboard’s lower-right corner (the up- and down-arrow keys are still half-size). 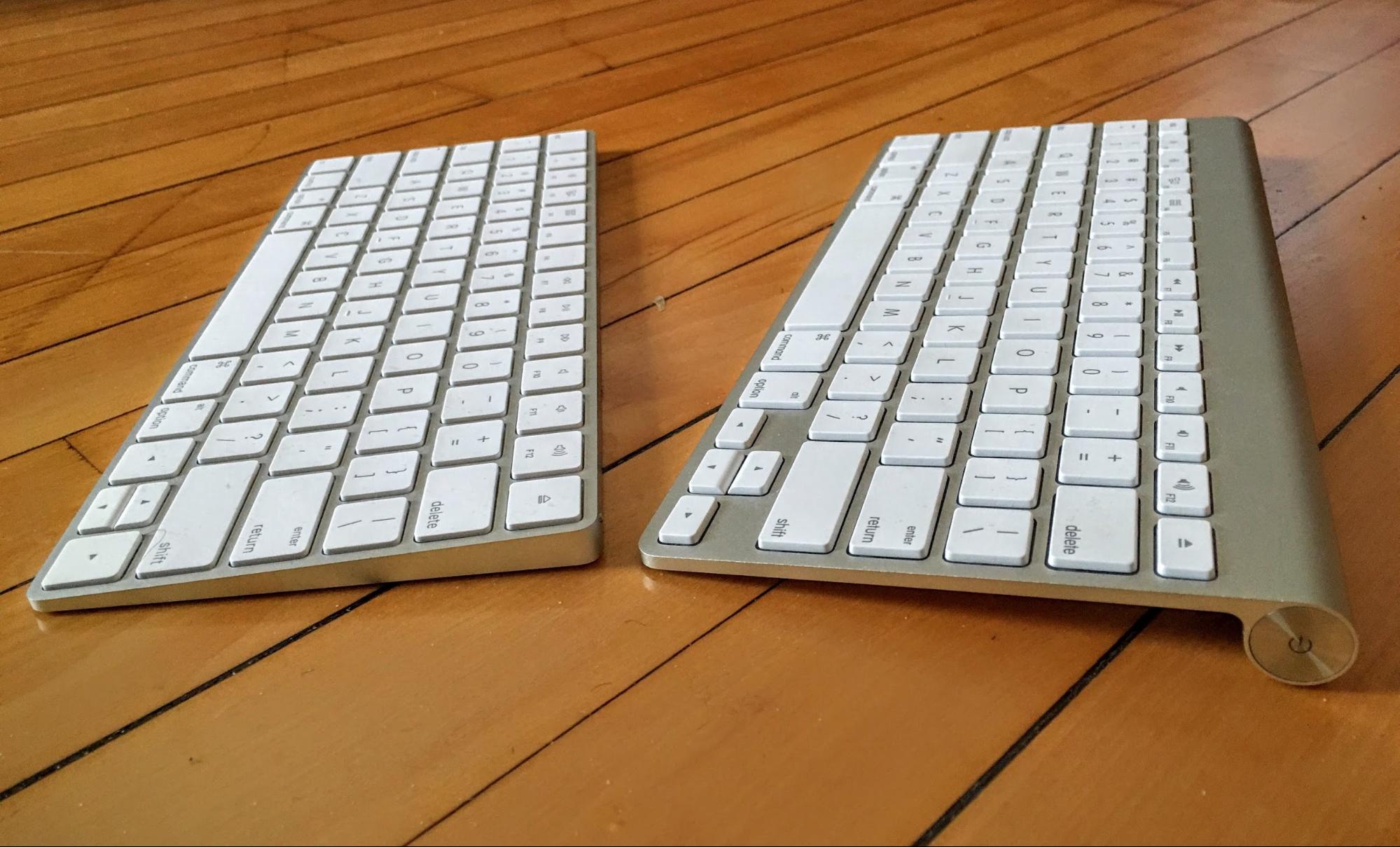 Perhaps most significantly, the back edge of the keyboard doesn’t rest atop a cylinder running the full length of the keyboard, which was a necessary element on the old keyboard to accommodate the battery compartment. The power button is now a toggle switch on the back instead of a round button at one end of the old cylinder.

The new keyboard is therefore somewhat less busy in appearance as a simple, slightly angled metal platform with embedded keys a bit more flush with the top. The overall look is attractive. 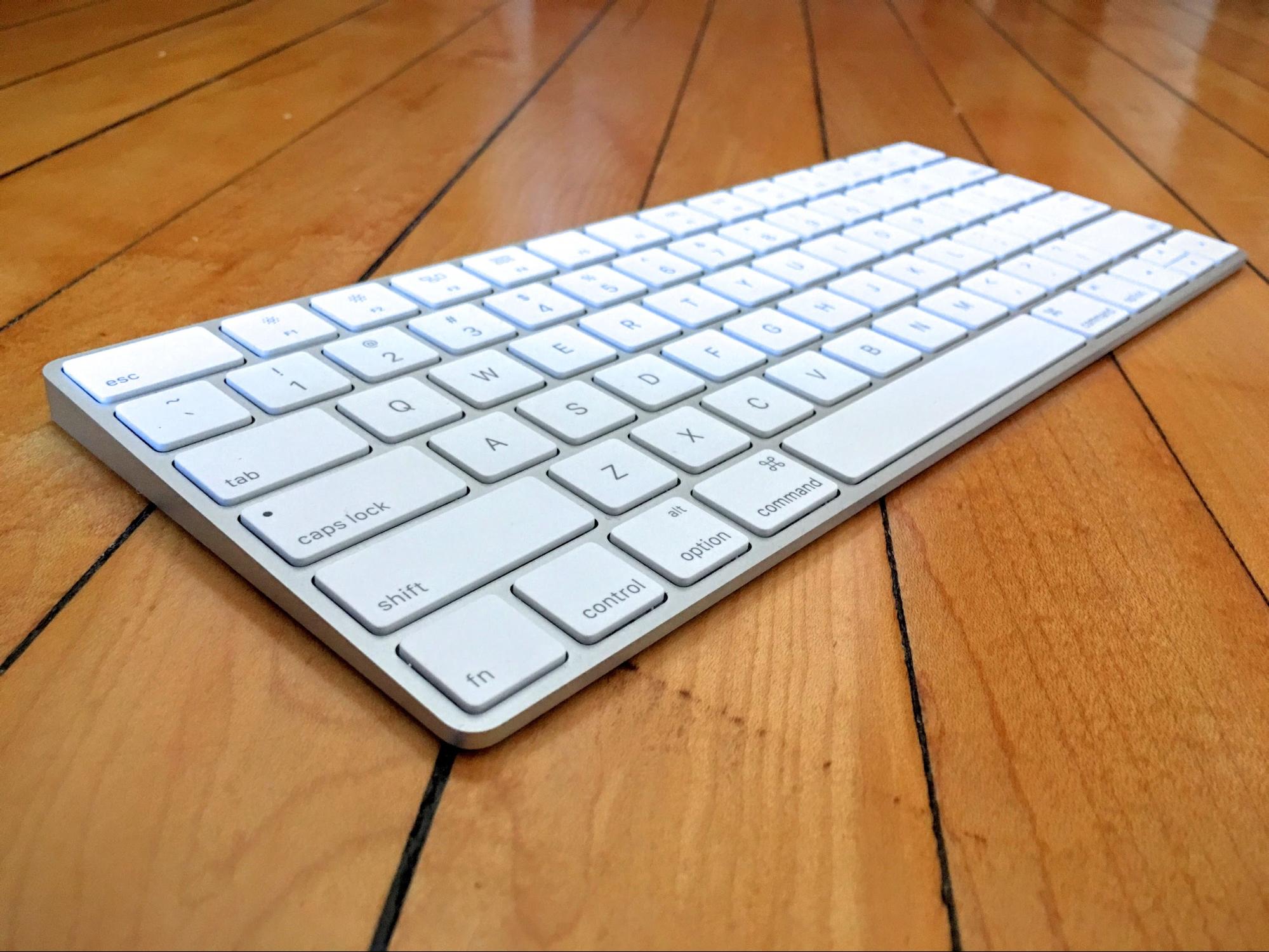 Whether the new keyboard is an improvement over the old one is open for debate. They feel quite different – much like a 12-inch MacBook keyboard feels different from that of a MacBook Air or MacBook Pro. I happen to love the newer, flatter keys. As a result, I found myself flying on the Magic Keyboard as I banged out this review.

Not surprisingly, given how controversial Apple’s old peripherals were, the new keyboard doesn’t look to be universally loved. TidBITS managing editor Josh Centers noted, “I’ve been using this keyboard, and I’ve grown to hate it. The key spacing is all wrong, so I make typos constantly, and I keep pressing the arrow keys while I’m typing.”

The keyboard’s aggressive minimalism is what stops me short. I swear by Microsoft’s Wireless Comfort Keyboard 5000, an oversized plastic-and-rubber peripheral with a Darth Vader vibe. It builds in a generously sized wrist rest with a pleasantly textured feel, along with a numeric keypad and a panel of page-navigation buttons. Its traditional key caps suit me.

I would be remiss if I didn’t note problems I experienced with two keyboards Apple sent me to be used with an iMac with 4K Retina display the company provided for review. I could not keep the input devices paired to the iMac, but it was unclear if the Mac, the keyboards, or both were to blame. I sent it all back, and a replacement iMac with keyboard have performed flawlessly as of this writing.

As with the Magic Mouse 2, the Magic Keyboard pairs via physical tethering with an El Capitan-based Mac, but it can link with other gadgets – such as an iPad, in this case – using regular Bluetooth pairing.

Unlike the Lightning port on the Magic Mouse 2, the one on the Magic Keyboard is positioned on the back edge in such a way that the peripheral can remain in use while charging. Apple claims a battery life of about a month on one charge.

But the new keyboard doesn’t strike me as a good mobile device, unlike others that include protective covers along with three-way dials or toggles for pairing with more than one computing device (for an example, see “Logitech K760: A Wireless Keyboard with No Strings Attached,” 13 November 2015). Apple intends the Magic Keyboard as a desktop device and that’s how you should use it (that is, unless someone comes up with a combo carrying case and stand similar to Incase’s Origami Workstation, a popular add-on for the old Wireless Keyboard).

Regardless, those mulling a switch from the Apple Wireless Keyboard to the Magic Keyboard should hold off until they have typed on a display model in an Apple store, or one belonging to a friend.

For starters, the new model is sensibly rectangular in a landscape orientation, like trackpads on notebooks, and not a square like the old trackpad, which afforded less horizontal room for fingers to maneuver. 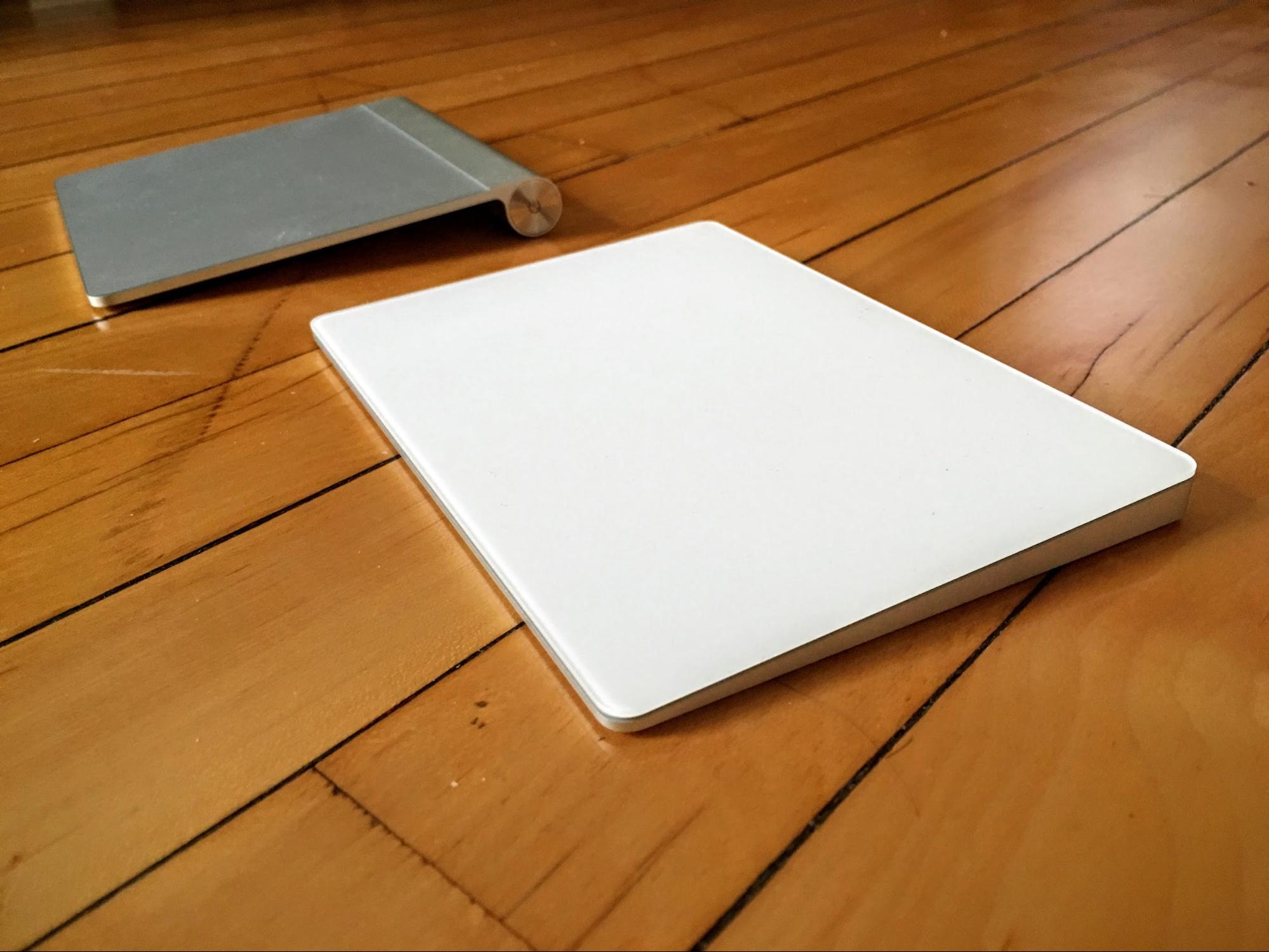 Both the old and new trackpads have glass surfaces, though the new one feels a bit more slippery, in a pleasant way. The surface beneath the new trackpad is white, to match the other devices, and it’s a color I prefer over the old gray.

As with the old keyboard, the old Magic Trackpad’s back edge rested on a cylindrical battery compartment with a power button at one end. 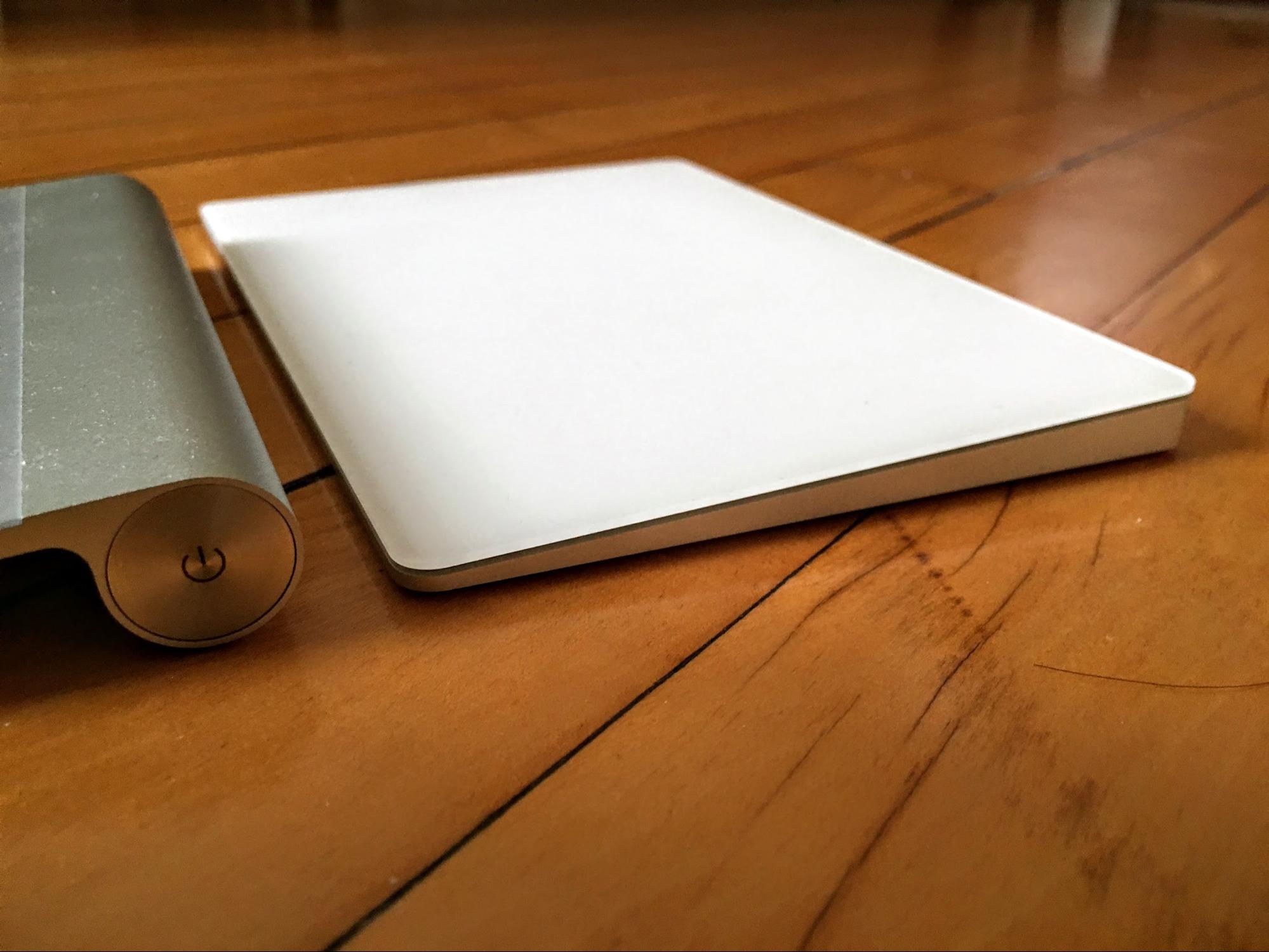 The Magic Trackpad 2, like the Magic Keyboard, is a simpler, slightly tilted platform with toggle-style power switch on the back. The two line up reasonably well, though not perfectly since the trackpad’s upper surface is, oddly, a bit taller than that of the keyboard. That annoys some people and seems like a major gaffe from Apple’s vaunted industrial design teams.

Most significantly, the Magic Trackpad 2 now incorporates Force Touch capabilities found on trackpads built into recent Apple notebooks. These includes a click followed by a firm press for Quick Look, Look Up (force-clicking text in a Web page or Mail message to see more information about it from sources like Dictionary and Wikipedia), and variable-speed media controls.

Force Touch never grew on me, despite its many uses, and I don’t think Apple’s new trackpad will change that. Besides, some have found that Force Touch activates at inopportune times, such as when dragging a file, which would make me inclined to turn it off entirely.

I have enjoyed all of this, though I doubt it’s enough to make the Magic Trackpad 2 a permanent resident on my desk, where it would clash spectacularly with my black Microsoft keyboard (as a Jedi knight would with a Sith lord).

The Magic Trackpad 2, as with its siblings, is meant to pair with an El Capitan-equipped Mac via the bundled Lightning cable. But, as with the other devices, the trackpad can link to computers via traditional Bluetooth pairing. I got it working with my Surface, for instance.

As with the Lightning port on the Magic Keyboard, the one on the Magic Trackpad 2 is positioned on the back to allow the peripheral’s continued use while charging. Apple claims a battery life of about a month, just like the keyboard and mouse.

Modest Magic — For those who have long loved Apple’s Mac peripherals, the upgraded versions should have appeal. Built-in batteries are a welcome improvement, and modern touches like MacBook-style keys on the Magic Keyboard and Force Touch on the Magic Trackpad 2 are sure to win converts.

But for those who aren’t fans of Apple’s previous input devices won’t be impressed with the upgraded variations. It’s unclear what level of usability research underlies either Apple’s past designs or these new devices — are the changes designed to improve typing speed and mousing accuracy, for instance, and does Apple have research showing that most users remember and use both existing and the new Force Touch gestures? Or are the changes mostly aimed at refining industrial design and power subsystems?

Regardless, the updates are mostly modest, merely tweaking and not revamping the old devices. This is particularly true of the mouse and, to a lesser extent, the keyboard, though changes to the trackpad are pretty cool.

I’ll stick with my Microsoft keyboard and Logitech mouse, even after I purchase my next iMac with its bundled Magic Keyboard and Magic Mouse 2. They’ll remain in the box to be sold off in pristine condition, along with that iMac, when the time comes.