A recent reader comment reminded me that just because a solution to a problem has existed for years doesn’t mean it’s well known. Randy Spydell asked, in essence, why the File menu has a Duplicate command instead of the traditional Save As command. Implicit in his question was “and is there any way to bring back Save As?”

The answer to that second question is yes, and I’ll explain how in a moment.

To answer the first question, you need to go back to 2011 and the release of Mac OS X 10.7 Lion, and then follow along with our coverage. With Lion, Apple introduced the Modern Document Model, which changed how documents are saved and handled — that’s where Auto Save, Resume, and Versions came from. Applications that supported the Modern Document Model also replaced the File > Save As command with File > Duplicate (see “Subtle Irritations in Lion,” 17 August 2011). That wasn’t popular with users (see “The Problem with Lion’s Duplicate Command,” 27 October 2011), so in 10.8 Mountain Lion, Apple brought Save As back, albeit hidden
behind the Option key and with a nasty side effect: when you made changes in a document and then used Save As, your changes were also saved to the original document (see “The Very Model of a Modern Mountain Lion Document,” 7 August 2012). Finally, in 10.8.2, Apple made it possible to control whether changes to the original document would be saved or not, via a checkbox added to the Save dialog (see “With 10.8.2, Mountain Lion Saves Even Better,” 20 September 2012).

As far as I’m aware, nothing related to Save As has changed since Mountain Lion, so the reason you still see Duplicate instead of Save As is that the application in question supports the Modern Document Model. New apps almost always will, but apps with older code bases, like BBEdit and Microsoft Word 2008, still use Save As instead of Duplicate.

Regardless, the more important question is how you can bring Save As back, if that’s what you’d prefer. I fall into that category — the make-a-duplicate-and-then-save model doesn’t fit with the way I think or work.

You could remember to press Option when the File menu is showing to reveal Save As or invoke Save As from the keyboard with Command-Shift-Option-S. But that’s fussy, and there’s a way to put Save As back on the File menu permanently, and even replace Duplicate with it, if that’s what you want.

I solved this problem many years ago with advice from Matt Neuburg’s “Take Control of Using Mountain Lion,” so I hadn’t thought about it in years. Randy’s question prompted me to verify that the trick still works in 10.11 El Capitan, which it does, so if you’d like to bring back Save As in Modern Document Model apps, follow these steps:

To verify that your change has taken place, click the File menu in TextEdit, which supports the Modern Document Model. You’ll see that Save As shows now, with the keyboard shortcut of Command-Shift-S, and Duplicate is also there, with no shortcut listed. 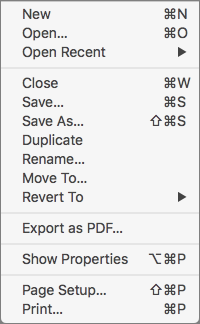 The reason this technique works is that Save As is an “alternate” of Duplicate; that is, the two commands normally have the same keyboard shortcut apart from the Option key. By assigning Command-Shift-S to Save As, you’re taking it away from Duplicate, thus breaking the relationship between the two commands.

Let’s take this one step further. If you never use Duplicate and are bothered by its presence, you can make it the alternate of Save As, thus ensuring that it will show in the File menu only when the Option key is pressed.

Just follow the same steps above, entering “Duplicate” into Menu Title, and setting the keyboard shortcut to Command-Shift-Option-S. You’ll end up with a pair of shortcuts that swap the two commands in the File menu. When you next look at the File menu in TextEdit, you’ll see only Save As, and when you press the Option key, Duplicate will show instead. 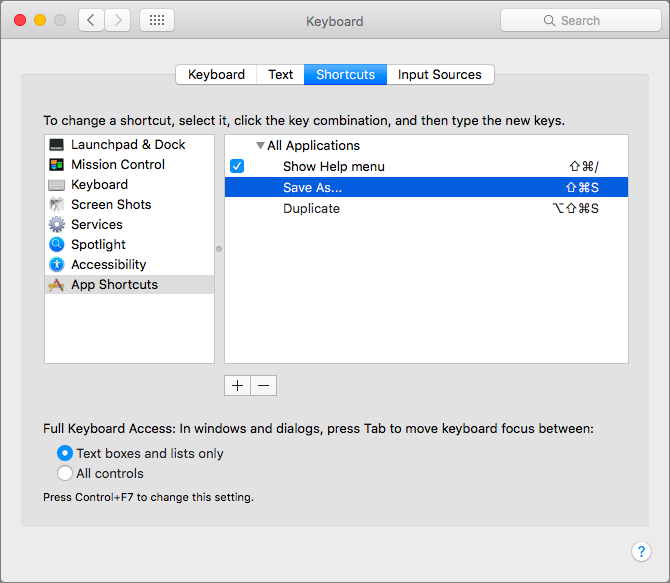 There’s only one problem, which is that this keyboard shortcut takes over for the Finder’s Duplicate menu item too, which is normally Command-D. The fix is to create another shortcut, for just the Finder, which assigns Command-D to Duplicate.

Needless to say, should you wish to revert to OS X’s default behavior, with Duplicate on the File menu and Save As appearing only when you press Option, select those items in Keyboard > Shortcuts and click the minus button to delete them.

One final comment: Remember how I said that OS X 10.8.2 added a checkbox to the Save dialog when using Save As on a document that had unsaved changes? That “Keep changes in original document” checkbox is important, because if you’re looking for the traditional behavior of Save As (where the original document remains unchanged), you should make sure to deselect that checkbox. When it’s selected, Save As works like Duplicate, and both the original document and the new document end up with the same changes. Although that checkbox is selected by default, OS X does remember its state, so after you deselect it once, it will remain that way.

I hope you found this Mac basics blast from the past helpful, and if you’d like to see more of this sort of content, let us know in the comments.

Comments About Put Save As Back on the File Menu