I used to love math and math used to love me. I never made it through calculus in college — though I suspect the decades of writing code since and general mental maturity would let me grasp it now — but there’s plenty from algebra, geometry, and trigonometry I could still put to use. If only I could remember the details!

I’ve been using the Soulver app for Mac ($11.99) and iOS ($2.99) for years now, and have fallen so far under its spell of allowing me to perform calculations using natural language that I often forget how to do them the old-fashioned way. Along the way, Google, Wolfram Alpha, and even Spotlight in OS X 10.11 El Capitan have improved so much in parsing and anticipating what I want, that between those four resources, all my math bases appear covered. (That’s base 2, 10, and 16!)

This article is an introduction to these four options for those who haven’t discovered them yet, though Google and Spotlight lend themselves to happening across results accidentally. (Try typing “16 mm” or “$1.25” into Spotlight and see what it says.)

Soulver for X in Both Mac and iOS — I discovered Soulver via a colleague years ago, when it was a less sophisticated program, and other options were slim. While I love James Thomson’s PCalc and own it on all platforms (including tvOS), PCalc is a calculator, not an interpreter (see “PCalc 4,” 10 April 2014, and “Apps that Reveal the Apple TV’s Potential,” 9 November 2015). I use PCalc when I need to tabulate numbers with a keypad or perform calculations. But when it comes
to moving among different units, finding conversion units, and performing currency calculations, Soulver is my first choice.

Soulver isn’t a true natural-language system. Such tools try to extract meaning from what you type and give you what they think you need. Rather, Soulver has a lot of built-in terms, units, and other options that let you type something that resembles an incomplete phrase, but makes sense when read aloud. And when you return to it later, you don’t have to sift out its meaning. (You can also put in comments for that purpose, but since this isn’t a review, I won’t explore Soulver’s features exhaustively.) I focus here on the OS X version, which has more features than the iOS release; the mobile version lacks stock tickers, for instance.

I refer to Soulver most frequently for units. Because I live in the United States, I’m constantly engaged in trying to remember how various imperial/standard units convert into others (cups in a quart, tablespoons in a pint, inches in a mile, etc.), and converting back and forth with metric units. I also frequently have to examine rates of things, like megabits per second.

I keep a general Soulver sheet open — you can save as many unique Soulver documents as you want — and in the last few months, I’ve queried things like:

Where Soulver shines is with bandwidth calculations, which can be maddening when you try to keep all the units in mind, the number of bits in bytes (and whether you’re using bits-per-second or bytes-per-second), and produce a sensible result in non-fractional or non-enormous time units. I may be unusual in needing these numbers, but I frequently require the results of something like 1.3TB / 600Mbit/s in hours (4.81 hours), as when I’m calculating the time remaining in a hosted backup.

You can use this the other way around when you want to know how much data the New Horizons probe will send in the next year after its Pluto flyby. At its current distance, it can transmit roughly 1 kilobit per second, and gets 8 hours of transmission time per day. (TidBITS style is to write kbps, where the lowercase kb is kilobits. Kilobytes per second would be KBps in our style guide. Soulver lets you type kbps or kbit/s as well as KBps and KB/s — but not kbyte/s!)

So, you budding space scientists can pop in 1 kbit/s × 8 hours × 365 as GB and get 1.314 GB, which explains why we didn’t get gobs of photos of Pluto, Charon, and other moons hours after the probe zoomed past.

Soulver automatically refreshes currency exchange values, too, so you can perform financial calculations ($9.99 in yen — ¥1230) and have the most up-to-date conversion appear in its Answer palette. If you click the palette’s name in the toolbar or click the i icon to the right, those additional values appear in a pop-over balloon. You can even add stock ticker symbols, and Soulver will look up trading prices.

Soulver has oodles of other options. You can assign variables to calculations in the form x = whatever calculation follows, and then use those variables in subsequent lines. You can also reference previous lines’ results as values used elsewhere, and those links are dynamically updated if you add more items above that line — they’re not tied to the position in the document. It’s sort of like a free-form spreadsheet. 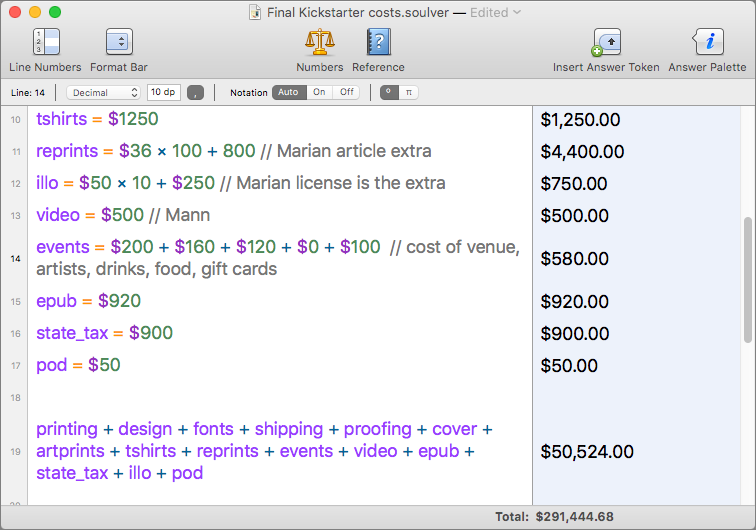 Formatting options abound, too, such as the number of digits of precision to show in results, whether to show results on the left side of the display rather than in a separate right column, degrees or radians, and more. When you have a result you like, you can select and copy it, or drag it into another app.

Spotlight’s and Google’s Calculations and Conversions — You may not realize that alongside other improvements to Spotlight in OS X 10.11 El Capitan, such as natural-language processing of queries, Apple’s search tool can now also do a lot of math — automatically. If you don’t want to install and learn Soulver, many of its unit conversion options are available through Spotlight.

For instance, type 150F, and Spotlight automatically returns the Celsius conversion, while also showing kelvins (a scale based on absolute zero) in its results preview window. 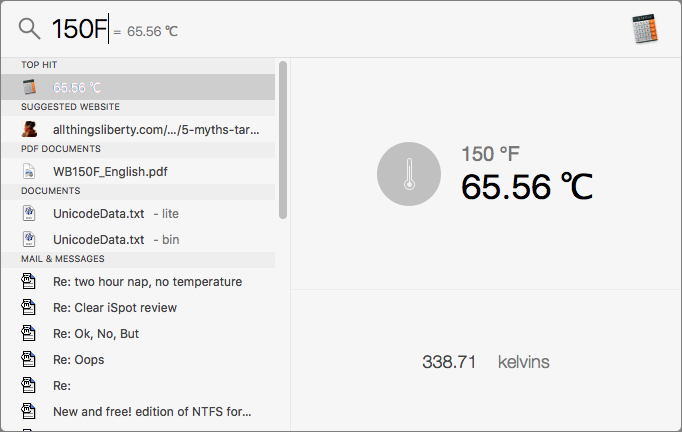 But you can do more:

Spotlight’s range is limited, but when you’re trying to figure out how many milliliters in 1 teaspoon, it has you covered.

Google started providing summaries of expected answers on its search page years ago. These have quietly become increasingly extensive and elaborate over time, often crowding out Web page results. Typing in any query that has units in it often produces a calculation field or other information at the top that provides the answer.

For instance, ask about parsecs to furlongs, and you get a nifty interactive calculator with pop-up menus to change units. (Ask how long it takes to do the Kessel Run, and you get only Star Wars results, however.) Enter currency amounts and both a conversion and a calculator appear. 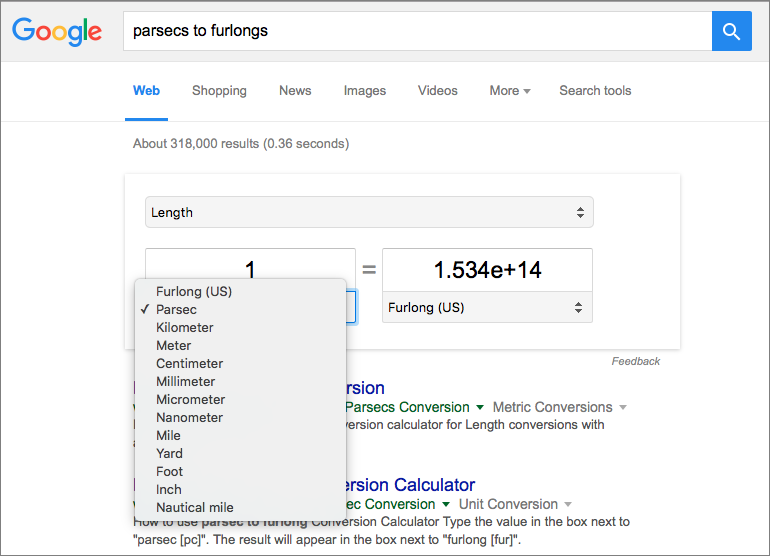 You can also ask questions related to formulas and receive appropriate response. For instance, type calculate hypotenuse of right triangle and an appropriate formula with fields for the a and b legs of the triangle appears. Google has a detailed list of all the calculation types it can handle and units it supports. 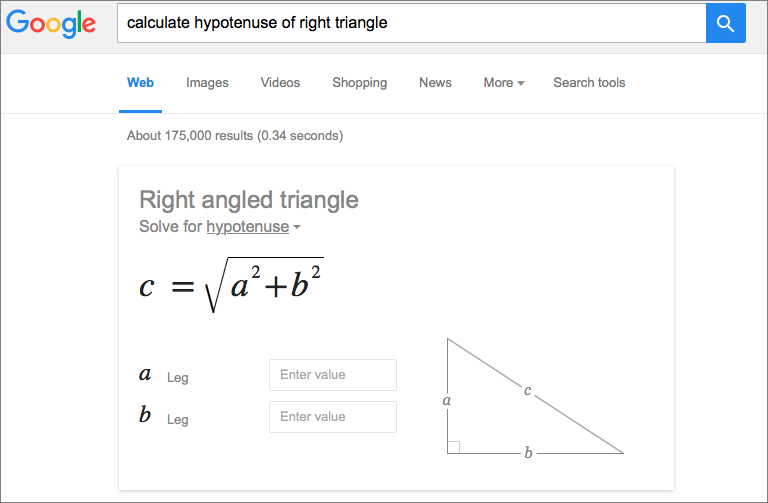 Wolfram for the Hard Answers — Stephen Wolfram is a brilliant fellow — and he knows it. Wolfram created Mathematica, a pioneering and still-developed program to represent, model, and compute all manner of symbolic mathematics. A few years ago, Wolfram released Wolfram Alpha, which uses Mathematica’s engine and incorporates all sorts of third-party factual data about the world, people, and companies. It’s free to use on the Web, although there’s an advanced for-fee version, and an iOS app
version is $2.99.

Wolfram Alpha automatically produces charts and graphs from data it knows, so you can ask for insights like “compare the murder rate of Seattle and Washington D.C.” and discover that Washington D.C. has become much safer than you may have realized, and, dang, my hometown is more fatal than I thought. 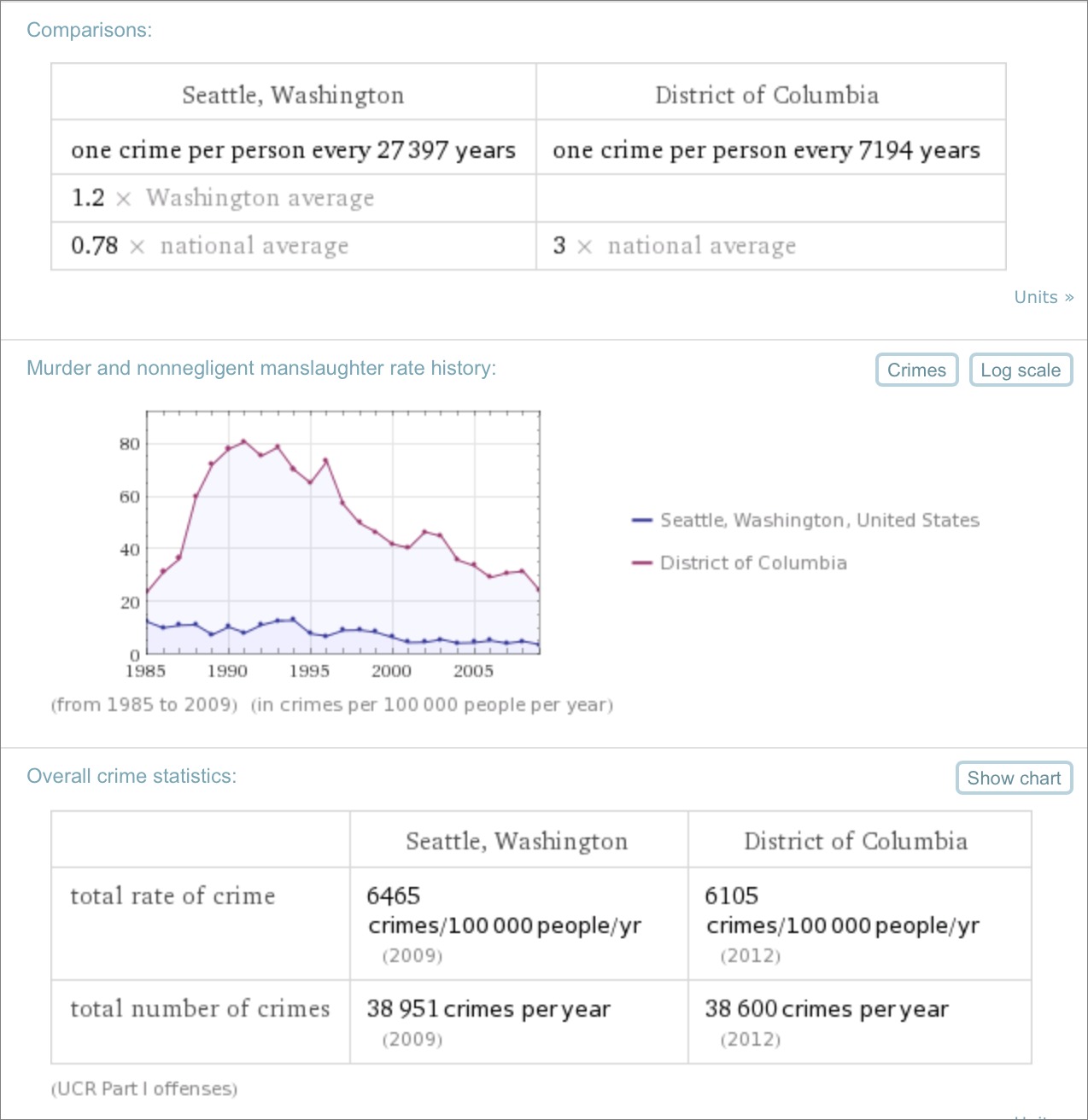 While you can get responses to all the queries above and much more — like the price of rice cookers and distances between places — you can also have it solve equations for you. I was recently working on a review of wireless IP cameras, and we discovered late that the field-of-view measurement in degrees was diagonal, rather than horizontal, thus overstating the horizontal field.

The ratio is 16:9 for most of the cameras we were looking at, and I knew that the Pythagorean Theorem (a^2 + b^2 = c^2) would do the trick. But I only knew the ratio of a and b and the value of c. After asking on Twitter, several math-savvy colleagues pointed me to Wolfram Alpha, and one provided what worked out to be the best formula:

The value for c could be whatever the diagonal degrees were for the given device. Learning the syntax behind this can help you whenever you’re trying to split up a complicated restaurant bill, or put up some shelves in the house.

The Final Reckoning — I have nothing against pencil and paper or a calculator (whether a physical device or an app). But having so many choices to engage in math, conversions, and exchanges without fuss has made my life so much better. Every tool I’ve mentioned rewards exploration, as you learn its syntax and limits. In the process, you might find yourself rekindling a long-dormant joy of messing with numbers.