I’ve been poring over the results of our TidBITS 2015 Reader Survey, and frankly, it has been invigorating. There are an infinite number of things we could write about, and numerous ways we could focus on the topics we cover, and after hearing from 2,267 readers, I have a clearer idea of where to direct our efforts.

Before I discuss the details, let me acknowledge that this survey is far from scientific, in large part because respondents were self-selected rather than chosen randomly. That said, I opened the survey up to paid TidBITS members and TidBITS Talk subscribers early, and compared their responses against the overall results. Unsurprisingly, they were a little more positive about nearly everything, but only a little, and the trends I saw early on didn’t change direction later.

For instance, 90 percent of respondents feel that our articles are “just right” in length, with 8 percent picking “too long” and 2 percent “too short,” and those numbers never wiggled by more than 1–2 percent each time I checked the results. We’ll stick with what we’re doing in that regard, but with an eye toward tightening our text.

Reader Age — Perhaps most useful was learning about the stage of life many TidBITS readers are in. As you can see in the chart, people under 40 make up less than 4 percent of the readership that will respond to a survey, whereas 80 percent of our audience is between 50 and 79. This says to me that our audience has remained stable over the years, since Tonya and I started TidBITS when we were 22 and most people who could afford a Mac back then would have been a bit older.

Another publisher might see this as a reason to change everything in an attempt to woo younger readers. We’re not doing that. Since we see the TidBITS membership program as the most important portion of the TidBITS business model (see “Become a TidBITS Member and Banish Banner Ads from Our Site,” 7 December 2015), our goal is to focus on what our current readers want, and I now have a better mental image of the people for whom we’re writing. Frankly, the average TidBITS reader probably has a
good deal in common with our parents, who have a range of technical skills and interests, but are all now retired and frequently asking us questions about their Macs, iPhones, and iPads.

Where Do You Get TidBITS? — When it comes to how you get TidBITS, email still rules, with nearly 80 percent of respondents getting our weekly issues in email, and 15 percent availing themselves of the TidBITS member benefit of receiving individual articles in email as they’re published. Another 15 percent rely on RSS, and 33 percent use our Web site. (The numbers add up to more than 100 percent because people often read in multiple ways.) 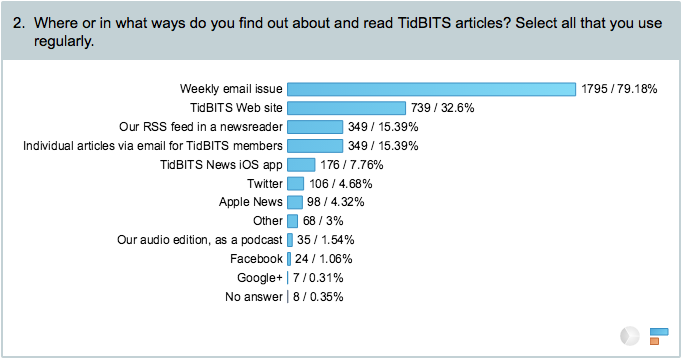 Social media isn’t a major way to access TidBITS, with only around 6 percent of readers using Twitter, Facebook, or Google+ to learn about new articles. The hardest number for me to read was the ranking for our audio edition, which is used by very few people — 1.5 percent — but which garnered a number of plaintive requests to keep it going. It may not last forever, but it won’t be an easy decision either way.

Apple Platforms — Moving on, let’s look at the Apple platforms you’re most interested in reading about. You can see how the votes broke down for each of Apple’s platforms in the full results, and how the graphs reflect the range of enthusiasm for each. As a way of comparing these, I’ve calculated a weighted average for each and then charted the values, so you can see them side by side.

I extract three important lessons from this chart:

The relatively strong showing for the Apple TV is skewed, I believe, by the fact that it’s a new platform for Apple. My guess is that if we’d asked this question before the fourth-generation Apple TV was announced, it would have been much lower. And I expect that as time goes by, interest in Apple TV coverage will drop unless developers come up with innovative apps that aren’t games. Yeah, most of you don’t play games — I’ll get to that next.

Article Types — Next up, I asked how interested you were in reading seven different types of articles, some of which we’ve encapsulated into regular columns in the email issue of TidBITS. Overall the weighted averages here were heartening, with only one clear message: stop with the games. (Sorry, Josh!) We had an inkling that this would be the case, since FunBITS articles seldom garner any comments, and while we had hoped originally that covering some games would attract new readers, that doesn’t seem to be the case. We’re not declaring a complete moratorium on coverage of entertainment software, but we’ll restrict it to those apps that we think will most catch
your interest.

I was happy to see that both the TidBITS Watchlist (short descriptions of updates to Mac apps, written largely by Agen Schmitz) and ExtraBITS (links to worthy articles on other Web sites) were quite popular — neither of them generate that many comments, so we’ve been feeling uncertain as to whether they were appreciated. They’ll continue apace, and the consensus in the free-form comments about ExtraBITS was that we should add more editorial commentary about the destination articles.

Content Types — This category of question was only slightly different, asking what you thought about somewhat broader types of content. On either end, the takeaway message is clear: you desperately want more practical how-to articles, but you’re just not that into hearing about non-Apple platforms. I’m ecstatic to have confirmation on the how-to end of things, since we’re good at that and I like it when we can make a difference in people’s lives by solving a problem or making something far easier than it was previously.

I’ll admit, I’m a little sad that more of you don’t want to hear about what other major companies are making, even only occasionally, and from the perspective of an Apple user. Personally, I like to keep up on the big trends outside Apple. Perhaps the strategy du jour of platform lock-in is too powerful, and as much as it might be theoretically interesting to read about what Google and Microsoft and Amazon are doing, you know it would be too hard to switch.

The thrust of the free-form comments associated with these questions was helpful. To summarize, you said you liked the way we handled things like Apple product announcements and the relatively minimal amount of business news we include, but what was most important was analysis, background, and editorial comment that goes beyond the facts. We’ll do our best to keep that in mind, and always try to add value to what’s readily available at so many other sites.

Take Control — Although we didn’t ask any questions about our Take Control series of books, they featured prominently in the free-form comments. Happily, most of the mentions were highly positive, but I heard loud and clear the complaint that we’re promoting them in TidBITS too much.

It’s a tough situation because Take Control book sales account for the lion’s share of our company’s revenue and a number of our authors rely heavily on Take Control to earn a living — those sales are essential for us. What I plan to try, then, is to extract content from our next book and have that practical information serve as the ambassador for the book in TidBITS. With luck, it will increase both the utility of TidBITS and sales of the book.

Wrapping Up — Thanks again for all your time in responding to our survey questions — I hope you’ll find our coverage tweaked in ways that you appreciate, without changing what you’ve long liked about TidBITS. I’ll admit, the survey results were one of the reasons I whipped up the article “Put Save As Back on the File Menu” (30 November 2015), which has proven extremely popular.

For those who asked questions in your comments, my apologies, but the survey was anonymous, so we have no way of responding to you. You can always send me email at [email protected], and if you need help with something administrative, the best way to get help from our new Director of Customer Service, Lauri Reinhardt, is to send email to [email protected]

Oh, and one last thing. The final question on the survey, “How likely is it that you would recommend TidBITS to a friend or colleague?” was designed to generate what’s called a Net Promoter Score. On a scale of -100 to 100, ours is 61, which seems good. I’m not really sure what it means, and it may not mean much except in comparison to other Apple publications, but there it is.