Apple has released watchOS 2.1 for all models of the Apple Watch, fixing a few bugs and implementing a number of changes that will make the wearable accessory more attractive to iPhone users in additional Asian, European, and Middle Eastern countries. You can find the 57 MB update in the Watch app on your iPhone, in My Watch > General > Software Update. To update, the Apple Watch needs to be in range of your iPhone, connected to its charger, and charged to at least 50 percent. The entire process could take 30–45 minutes all told, so make sure you have time. 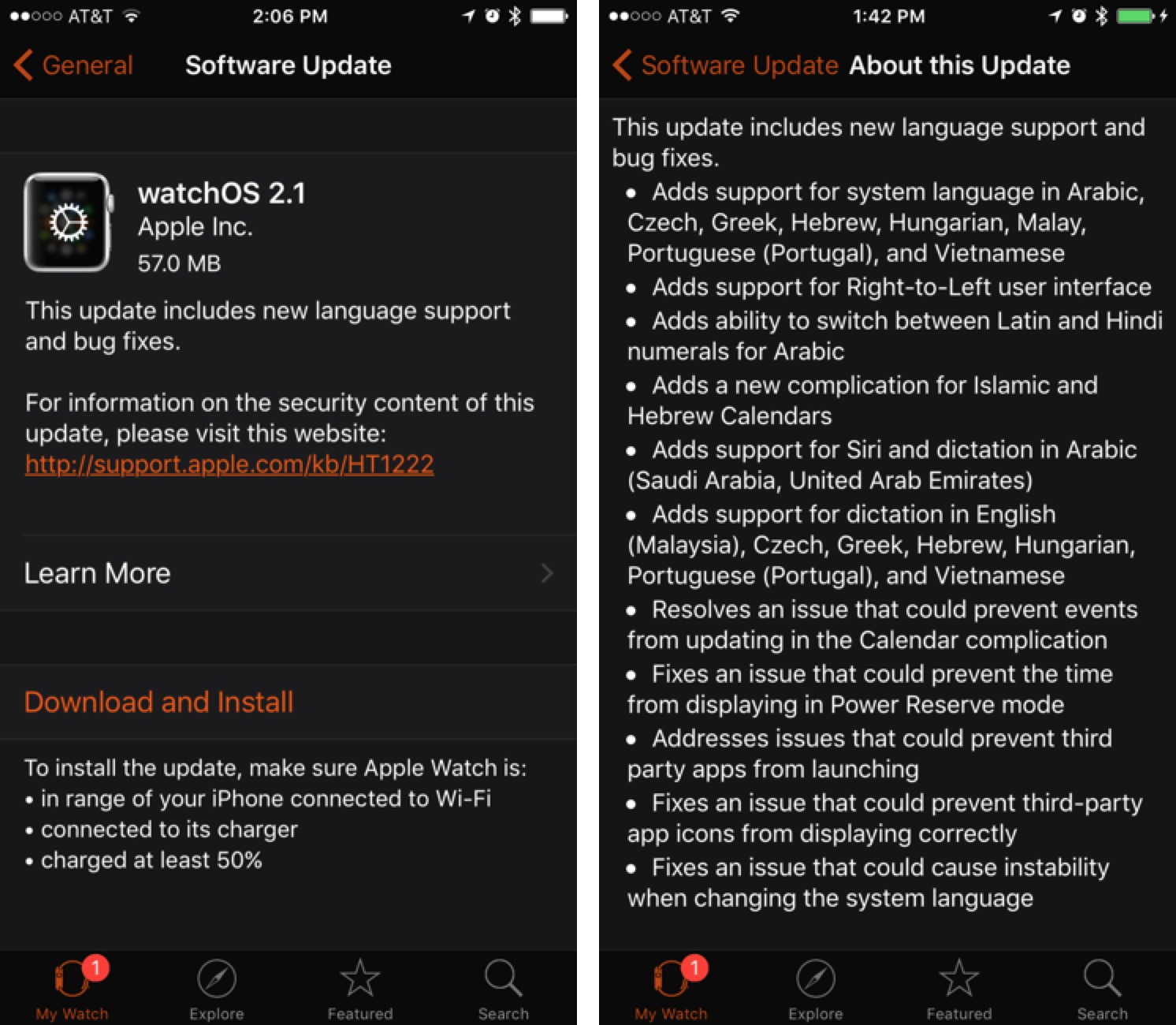 On the language side, the Apple Watch now supports Arabic, Czech, Greek, Hebrew, Hungarian, Malay, Portuguese (Portugal), and Vietnamese as system languages. For those who speak Arabic, you can now switch between Latin and Hindi numbers, and watchOS 2.1 adds support for Siri and dictation in Arabic — Apple parenthetically specifies Saudi Arabia and United Arab Emirates for this support for reasons that aren’t clear. Does Siri’s Arabic support work only in those countries? There’s also a new watch face complication for Hebrew and Islamic
calendars — perhaps this is Apple’s way of supporting the Middle East peace process.

Dictation support is also now available for the other newly added languages: Czech, Greek, Hebrew, Hungarian, Malay, Portuguese (Portugal), and Vietnamese. The implication from the release notes is that Siri is not supported in these languages, but I can’t verify that.

In terms of bugs, watchOS 2.1 resolves problems relating to events failing to update in the Calendar complication, the time not showing while in Power Reserve mode, third-party apps failing to launch, app icons not displaying correctly, and crashes when changing the system language.

Finally, watchOS 2.1 includes a large number of security fixes; I don’t have a sense of how vulnerable an Apple Watch is to being hacked, or what the liability of that might be, but the fewer vulnerabilities, the better.

If you’re a native speaker of one of the newly added languages, watchOS 2.1 is an important update that’s worth getting right away. Or, it may be the update you’ve been waiting for before buying an Apple Watch at all. For those whose language needs were already being met, however, the bugs fixed are sufficiently minor that I recommend waiting for a few days before updating in case the update suffers from any unexpected problems. We haven’t seen any issues with it on our watches.

Apple Watch
Cookies & Privacy: We wish we were talking about chocolate-chip cookies here, but our Web site—like nearly all others—relies on a few minor digital cookies. Various laws around the world require us to tell you that fact, so consider yourself informed, if not nourished. By continuing to use this site, you agree to our use of these cookies. Cookie and Privacy Notice