In “Rdio to Shut Down, Assets to Be Acquired by Pandora” (17 November 2015), we reported that music-streaming service Rdio was coming to an end, and it didn’t taken long. The company shut down its service on 22 December 2015, but there’s still time to export your data.

What can you do with all of this data? Rdio recommends importing those files into Soundiiz or Stamp, both of which promise to transfer your data to other services, including Apple Music and Spotify. (After we published this article initially, Rdio added a tool to transfer your Rdio stations to Pandora, via a Send Stations to Pandora button, though it didn’t work in our testing.)

However, I chose to use the Spotify Rdio Importer instead. There are a few reasons I moved my Rdio collection to Spotify:

The Spotify Rdio Importer is easy to use. Visit the page in your browser and drop the .zip file exported by Rdio into the outlined box. Next, you’ll be told what exactly will be imported into your Spotify account, and you’ll be asked to log in to Spotify. After you log in, you’ll be prompted to connect the Rdio Importer to your account. Click Okay to finish the import. 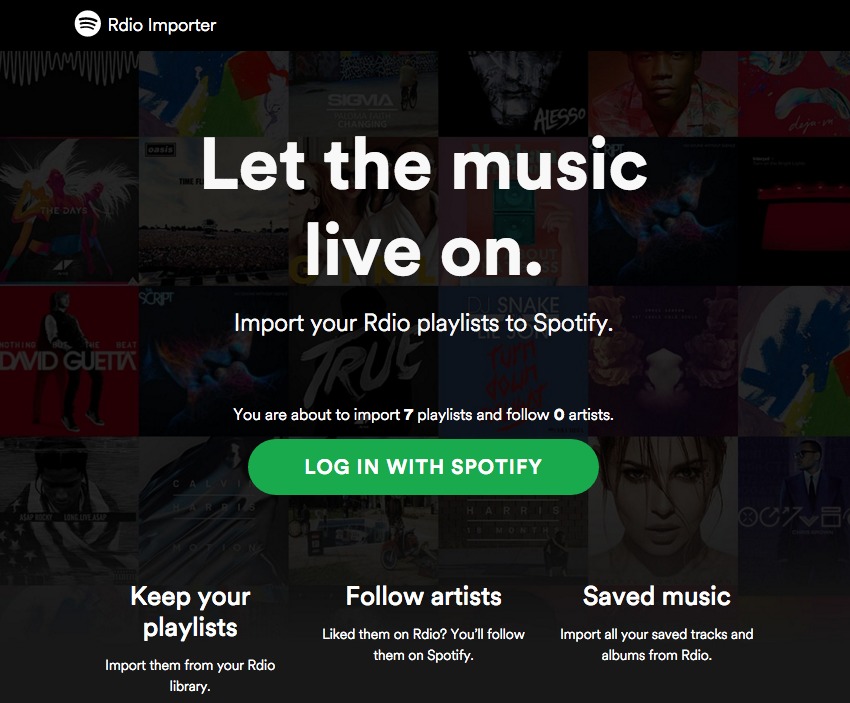 Open Spotify and you should see your imported stuff there. Your Rdio favorites will be in a new playlist called “Favorites of YOUR NAME.” You’ll also see a playlist composed of your downloaded Rdio tracks, as well as any other playlists you had in Rdio. That was good enough for me, but it may not be for you. Adam Engst discovered an unfortunate oversight in Spotify’s Rdio Importer: favorite albums in Rdio aren’t transferred as saved albums in Spotify; just as a list of songs in your Favorites playlist. So if your Rdio listening was primarily album-based and you wish to replicate that in Spotify, you’re not done yet.

Adam worked around the problem with an Rdio-to-Spotify converter at move.152.io. It’s not perfect either, in that it can transfer only albums that have been favorited in their entirety; if you favorited less than 100 percent of the songs on the album, the entire album will be skipped. Nevertheless, running it after the Spotify Rdio Importer populated Adam’s Album list in Spotify with the majority of his Rdio collection.

If move.152.io doesn’t work for you for some reason, try Mooval, which moves favorited Rdio albums over to saved albums in Spotify, but with the caveat that it saves only the first song on each album. Thus, you must go through your entire collection, display all the rest of the songs on that album, and save the entire album again. If you run both, as Adam did, you’ll get a lot of duplicate saved albums, one with a single song saved, and the other with every song saved.

Spotify undoubtedly has advantages over Rdio — Adam is particularly fond of the way Spotify can display lyrics for many songs — but it’s still sad to see Rdio go. Its clean interface will be missed.

Comments About How to Move Your Music Off Rdio