As 2016 dawns, I can’t stop thinking about Yosemite and El Capitan. Not Apple’s operating systems, but the Yosemite National Park and its famous El Capitan rock formation from which Apple purportedly took inspiration. Designated as a World Heritage Site in 1984, Yosemite is renowned for its spectacular scenery and biological diversity — and it’s only one of the 59 U.S. national parks, all of which are worth a visit. But these aren’t the sort of places you can just swing through on a weekend — we’re talking nearly 52 million acres (210,000 square kilometers) and millions of visitors each year.

So now is a good time to start planning travel and lodging if you’re considering a visit to Yosemite, Yellowstone, Grand Canyon, Acadia, or any of the other national parks. In the past, that would have meant picking up a guidebook, but that industry has fallen on hard times and it can be hard to find an up-to-date title, particularly about the lesser-known parks. Information abounds on the Internet, of course, but quality varies wildly, and there are no guarantees that details are current. Besides, who wants to be navigating random Web sites on an iPhone while looking for a trail map?

Enter Kerry Gallivan. Back in 2008, he was hiking up Gorham Mountain in Acadia National Park on a cold, rainy day. He had his iPhone with him, but he had neither cell service nor an app that could provide information on routes and trail conditions. Chilled and wet, he came up with the concept for Chimani on the spot, and founded the company with Shaun Meredith two years later to develop offline guidebook apps for U.S. national parks. Now, in conjunction with the centennial of the National Park Service, Chimani has released the 3.0 version of their engine for an overview app and individual apps for 19 of the most visited parks. All the apps are
free and work on both the iPhone and iPad.

Chimani National Parks, the overview app, contains information for the 409 units of the National Park System, which goes beyond the parks to include monuments, seashore, historic sites, battlefields, scenic trails, and more. The writeups are necessarily brief, but maps and links to official Web sites are included, and the images are gorgeous — many of them come courtesy of photographer QT Luong, who has taken over 12,000 large-format photos of U.S. national parks. This overview app is especially worthwhile early in your planning process.

The individual park apps are more useful on the ground. Chimani currently offers apps for these parks:

Each of Chimani’s apps relies on a similar tile-based interface that leads into a hierarchy of information. Where possible, Chimani sticks with the same icons as used by the National Park Service on its signs. Although sections vary somewhat between parks, they generally include an overall map, park information, a photo gallery, lodging, hiking trails, bicycling trails, points of interest, museums, picnic spots, restroom locations, and potential hazards. The Auto Touring sections often contain audio so you can listen to the description while driving, instead of making a passenger read to you (be sure to enable the ringer on your iPhone first). There’s even a section for spots to watch the sunrise and sunset, complete with times and
the golden hours for photos, for any day of the year. 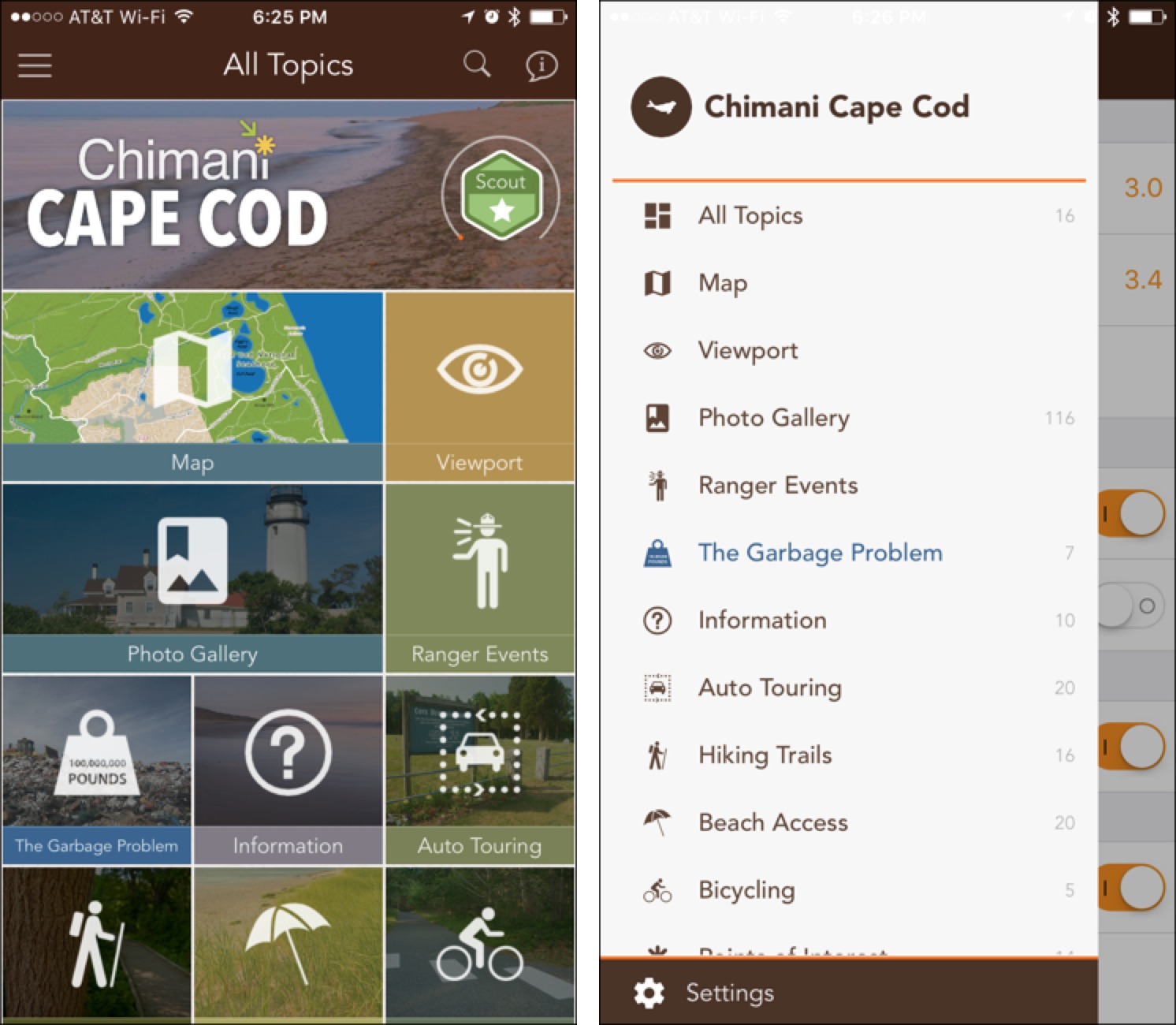 The section tiles are mirrored by a menu you can display by tapping a hamburger button at the top left of the screen, if you prefer a more compact list — the menu is also required to back out of a subsection to the main screen, although Chimani tells me that will be improved soon.

Tapping a tile leads to a secondary tile screen listing specific articles; tapping one of them displays the article. Content has been generated entirely by Chimani, with excellent photography — tap the article’s main photo to see others. Not every article has a photo, of course, but those I’ve seen have been lovely. The articles tend to be brief, but those associated with places also have maps, and hiking trails include icons telling you what kind of trail it is, what distance the trail covers, how long it will take to hike it, and how steep it is. There’s the ubiquitous share button on each article and photo, and while planning a trip, you can also tap the bookmark button to save any place you want to be sure to visit. 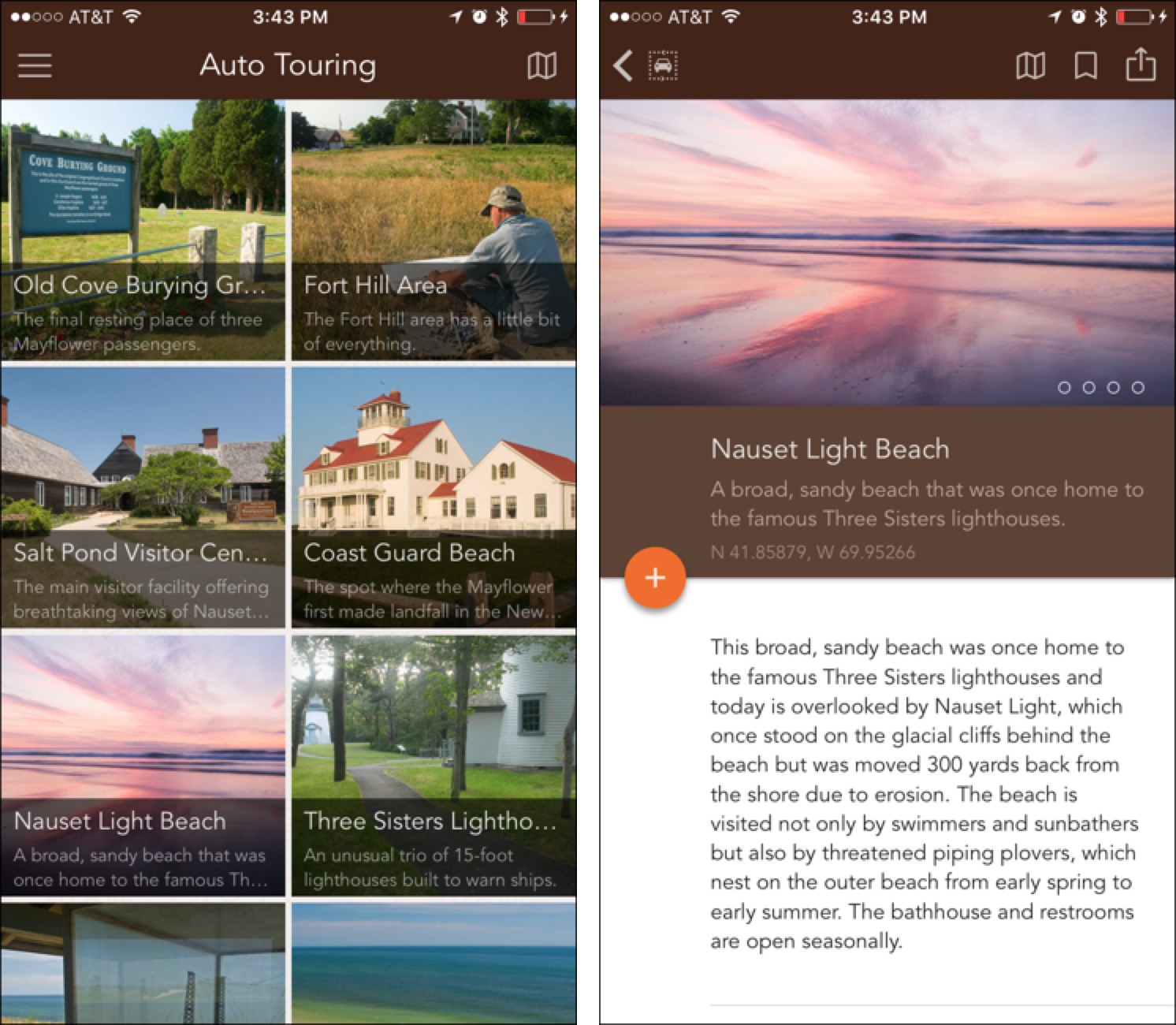 A new feature in the latest release introduces a slight gamification aspect to the app. For each article, a plus button lets you record visits to that spot, and you earn badges for each visit. It’s a nice way to keep track of where you’ve been, but the feature is really designed as a bridge between generations — imagine you’re taking your kids or grandkids on a week-long trip to Yellowstone and need a way to help keep them interested. The apps are location-aware, so when you say that you’ve visited a
point of interest when you’re actually in that spot, your visit is verified, and you get not just a badge for that place, but also points toward a Scout badge that appears at the top of the main screen.

Tapping the Scout badge shows the My Chimani screen, where you can see all your badges and points. It’s a little silly, of course, particularly for the articles that provide details about restrooms, say, but it might make seeing more of a park palatable to kids, or just be fun for the completion freaks among us (hey, I resemble that remark). 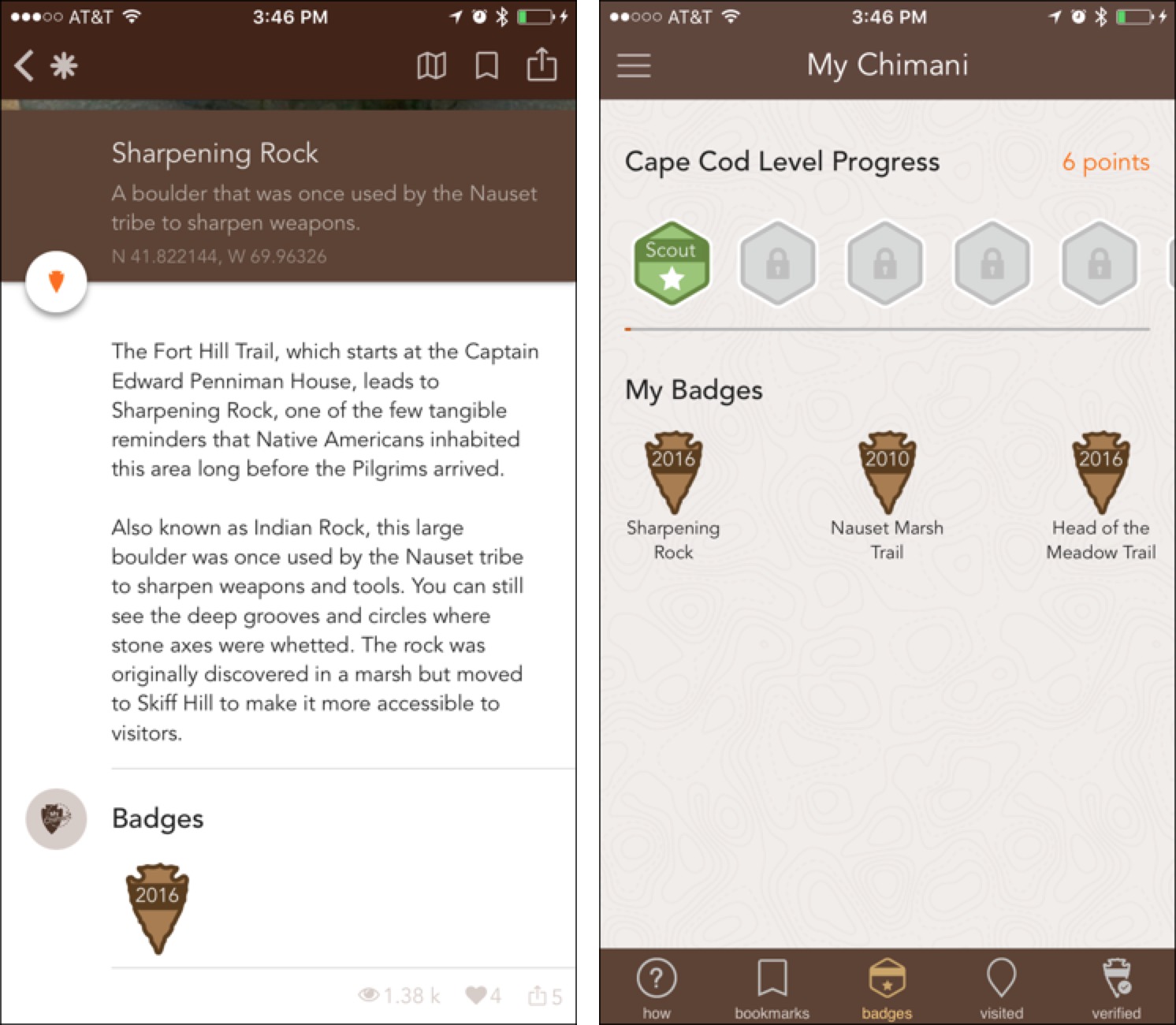 Another tile at the top of the main screen is called Viewport, and is designed to provide “augmented reality.” Bring it up and center a point of interest in the viewfinder and the app will show you the article about that spot — Kerry Gallivan describes it as having a ranger tell you about what you’re looking at. It’s impossible to test this without visiting a park, so I can’t tell if it’s mostly a gimmick or if it would actually be fun to use.

Of course, all this data is useful only if has been downloaded to your iPhone or iPad ahead of time, since many of these areas will have no cell service at all. The code and text of the app isn’t particularly large — the apps average about 30 MB — but maps can be big. So big, in fact, that Chimani provides three levels of maps. The base level comes with each app, and is intentionally broad. When you’re viewing any map, tapping a … button in the upper right provides map controls, including the option to download minimal or full maps. If you want to see where on a trail you are, rather than just that you’re on it, you’ll want more detailed maps. 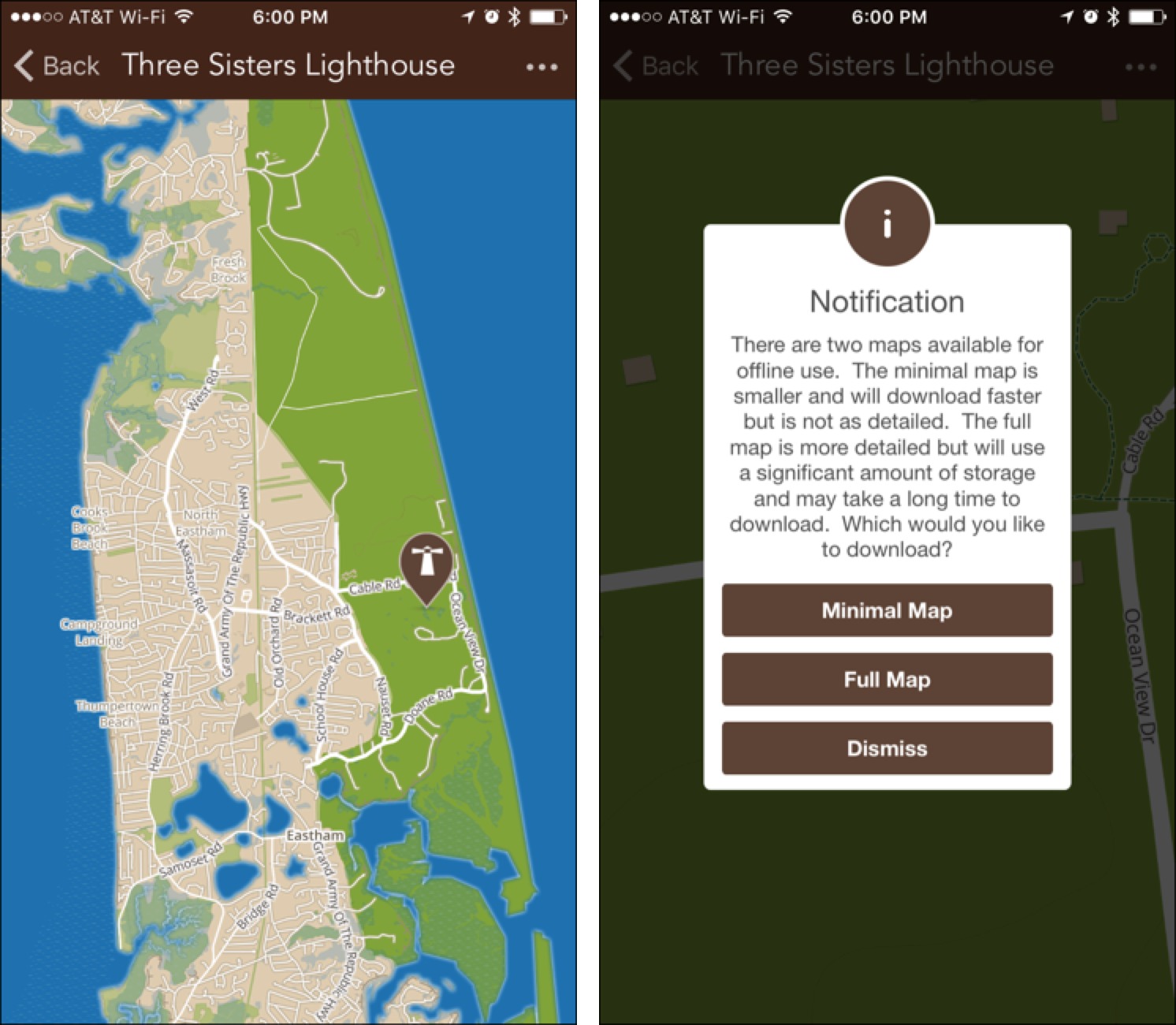 Maps range from about 30 MB up to a whopping 1.5 GB, so it’s a good idea to download them over Wi-Fi before you leave; the app includes a switch to prevent downloads while using cellular data. Even caching the map tiles for a full map can take a very long time, so it’s best done when you don’t need to use your iPhone for anything else, perhaps even overnight. You can also (in the Settings screen) delete maps to save space if you’d rather trade map data for the ability to take more photos once your iPhone fills up. 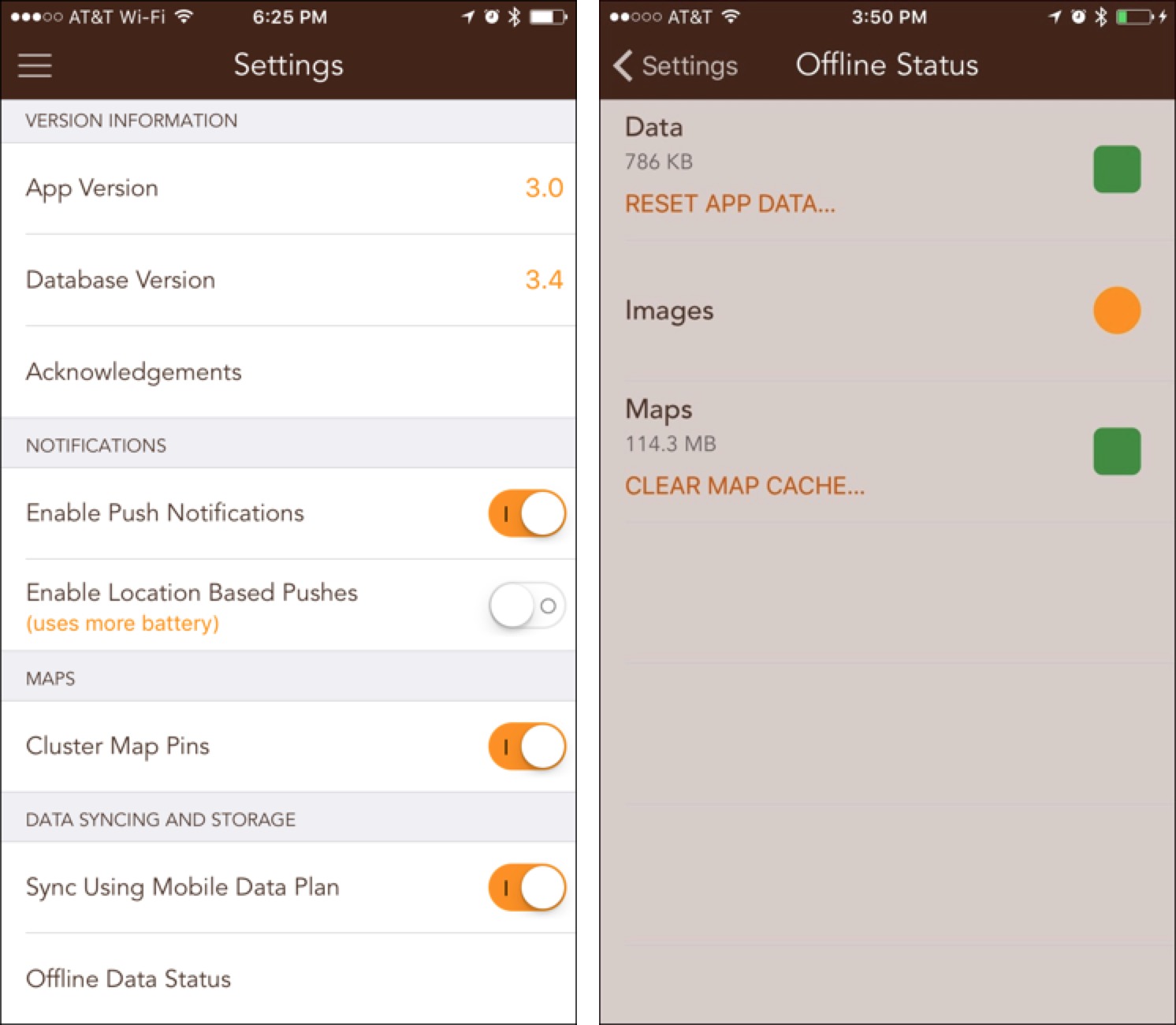 Overall, the apps work well, although tapping the plus button to add a badge crashed the Cape Cod app a few times in my testing, something that’s reflected in other App Store reviews. Hopefully Chimani will fix that one soon. My only other criticism is that the article font is small and thin — I found myself wanting to zoom in, which isn’t possible. I’d like to see an option to increase font size.

The apps are all free, and Chimani’s business model involves paid listings from lodgings and other businesses near the various parks, along with a sponsorship from Subaru that’s reflected in a special section dedicated to discussing the garbage problem. It currently includes seven short articles about garbage in general, how you can avoid adding to landfills, and how Subaru is doing its bit. Advertorial, sure, but well-meaning. And really, refill your own water bottles rather than using disposable plastic bottles, which make up 20 percent of the trash in the parks (at least they also make up 30 percent of the recyclables gathered).

To be clear, the target audience for Chimani’s apps is not the sort of people who venture deep into the backcountry on long, self-supported hikes (they would run out of battery quickly anyway). No, these apps are aimed more at those who prefer to drive through the parks, stopping for day hikes, museum visits, and sightseeing appropriate for everyone ranging from small children to senior citizens. If that’s you, and you’re thinking you’d like to experience the vast riches of America’s national park system during the National Park Service’s centennial, download a few of Chimani’s apps and start exploring.