The fourth-generation Apple TV hosts a boatload of programming, and can play anything you can record and import into iTunes, but one glaring omission has been broadcast television. No longer. The tvOS Channels app tunes into over-the-air (OTA) broadcast digital television on an Apple TV as easily as Netflix or Hulu as long as you have the right networked tuning hardware. The $14.99 app enables channel surfing of the old-school variety; it’s not a digital video recorder (DVR), doesn’t play recorded programs, and doesn’t even let you pause in the current version. Instead, it’s a bridge for those who want to watch OTA programming from within the Apple TV interface.

Channels pulls in program details about what’s currently being broadcast, shows previews in a channel view of the current show, and lets you set favorite channels so you’re not forced to scan through the odd offerings of small regional stations.

If you have OTA tuning hardware made by SiliconDust under the HDHomeRun name, or were thinking about adding to or rejiggering your setup to include OTA programming, Channels is a nice addition to your available options.

You can purchase the app in the tvOS App Store outside the United States, but the developers have only confirmed it works as expected in Australia, Canada, Denmark, and the UK, relying on user reports.

Free Programming You Already Paid For — In an age of digital cable, satellite, and Internet streaming, over-the-air programming may seem quaint. Why not get the quality of cable or satellite and the advantages of readily available DVR hardware rather than going direct?

Cost, for one. OTA programming remains free in the United States because the public airwaves are public: you can’t charge for programming. Through an interesting quirk in a decades-old law, local broadcast stations continue to be relevant because they can negotiate a carrying fee with every cable, satellite, and IPTV (Internet Protocol Television) provider — local stations can’t be carried by such providers without permission, and that typically requires a fee.

If you’re not already set up to receive broadcast digital TV, you can check to see what stations are available at your specific address via the AntennaWeb site.

Digital Tuner Hardware and Software for DVR — You can get any available OTA programming just by tuning in, and digital tuners let you pump that programming over USB or a network. Here’s where things start to get complicated. El Gato makes such hardware under the EyeTV brand, but no longer sells it in the United States. I had an old single-tuner EyeTV model for years, but it didn’t work well on many channels, due to reception problems, even before it finally gave up the ghost.

El Gato still sells its DVR software for OS X, called simply EyeTV ($79.95). Several months ago, I purchased a SiliconDust HDHomeRun Connect, which is a dual-tuner, Ethernet-connected device. I then updated the EyeTV software that came with my El Gato hardware to version 3, which is compatible with HDHomeRun devices. This let me turn one of my Macs into a part-time DVR. I have EyeTV automatically transcode programs and export them to iTunes, so I can watch them via my Apple TV over the network, from my Mac’s shared iTunes library. I wrote about
this
in May 2015 at Macworld. (To get schedule information, El Gato requires a separate annual subscription to TV Guide.) It’s a little funky, but it works well. 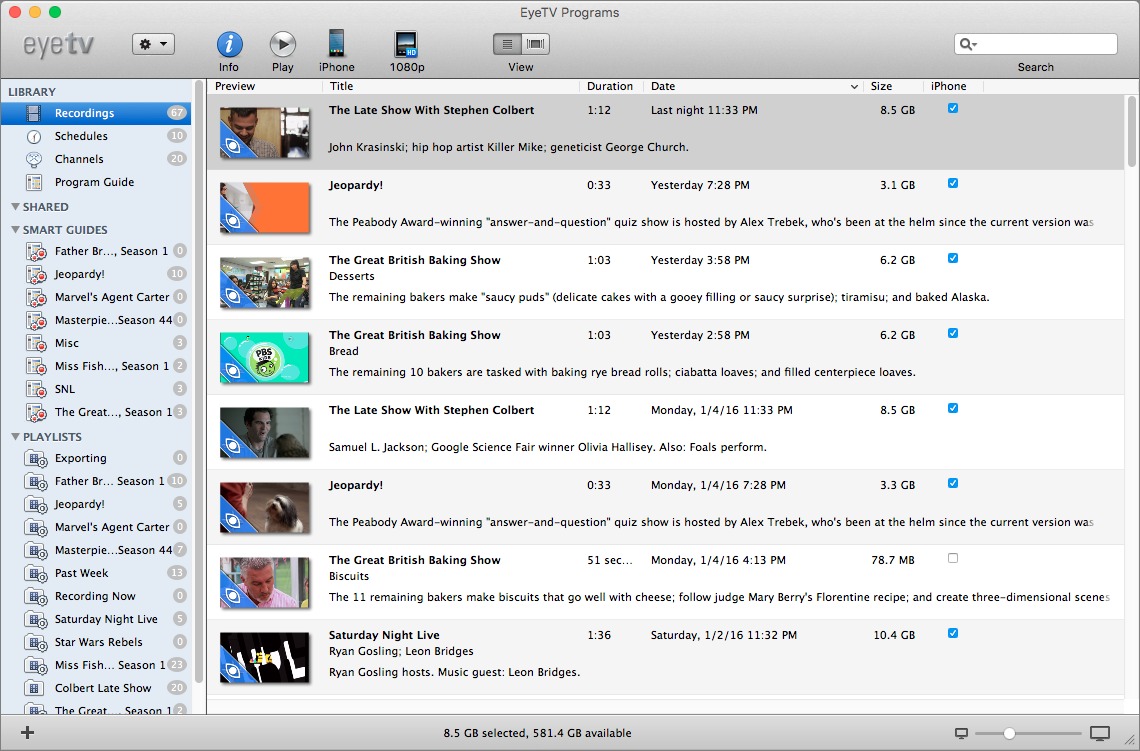 I live in a TV tower signal shadow at the bottom of a hill, and my old EyeTV box tuned most of the local stations quite poorly. With the same roof-mounted TV antenna, the HDHomeRun Connect pulled in more signals and crisply, while needing only a single run of coaxial cable to tune different stations at once. Switching to the HDHomeRun opened up some possibilities for watching live TV, which hadn’t previously been possible on the Apple TV.

Because the HDHomeRun Connect is certified by the DLNA (Digital Living Network Alliance), which requires the use of UPnP (Universal Plug and Play) for discovery, I could use the free VLC app on a Mac to receive live broadcasts. I could also turn to the wonky InstaTV Pro (free, but with a required $12 in-app purchase) that lets me view OTA programming in iOS. (My HDHomeRun Connect streams as MPEG2; the HDHomeRun Extend model has an internal H.264
compressor for better networked and mobile-device performance; and the HDHomeRun Prime model can accept a cable-operator-provided CableCard, which can bring in a combination of broadcast, bundled cable/satellite-only, and premium channels — more on CableCard shortly.)

But it’s a pain to get either VLC or InstaTV Pro to display on an actual television. I could AirPlay them to my Apple TV, but that’s not always reliable. El Gato does have an iOS EyeTV app ($4.99) — but not yet a tvOS one — that works with the EyeTV software on the Mac and allows the use of AirPlay, but all the extra levels of software are awkward, add delays, and reduce quality.

Why not just use a TV to tune rather than messing about with Channels and an Apple TV? Well, my TV is a Samsung, which is one of the major brands, and the interface is about as good as an Apple device owner would expect, meaning that it’s not terrible, but it’s a pain. So I could run an antenna connection into my television, use its remote, and tune. I could even use an HDHomeRun via UPnP to the Samsung model I have. I could, but then I’d have to fuss with input switching, a separate remote control, and the clumsy Samsung interface. I don’t want to do that, and I suspect many of you don’t either.

With Channels, watching live TV becomes easy, and is accessible within the Apple TV interface alongside Netflix, Hulu, and home sharing from a Mac running iTunes.

Channeling Simplicity — There’s not much to Channels, which is a plus. It’s a one-trick tvOS pony, and currently works only with HDHomeRun hardware, although the Channels developers also hope to support the upcoming HDHomeRun DVR software.

Channels detects any HDHomeRun tuners on the local network and adds them in its Settings screen, where you can mark individual channels as favorites, so they show up in a separate view. Favorites can be rearranged on the main Favorites screen, where you press and hold the Siri Remote’s touchpad until the previews jiggle, after which you can move them around as in the main Apple TV apps view. Settings is also where you can try to add tuners that don’t appear automatically, and configure audio. 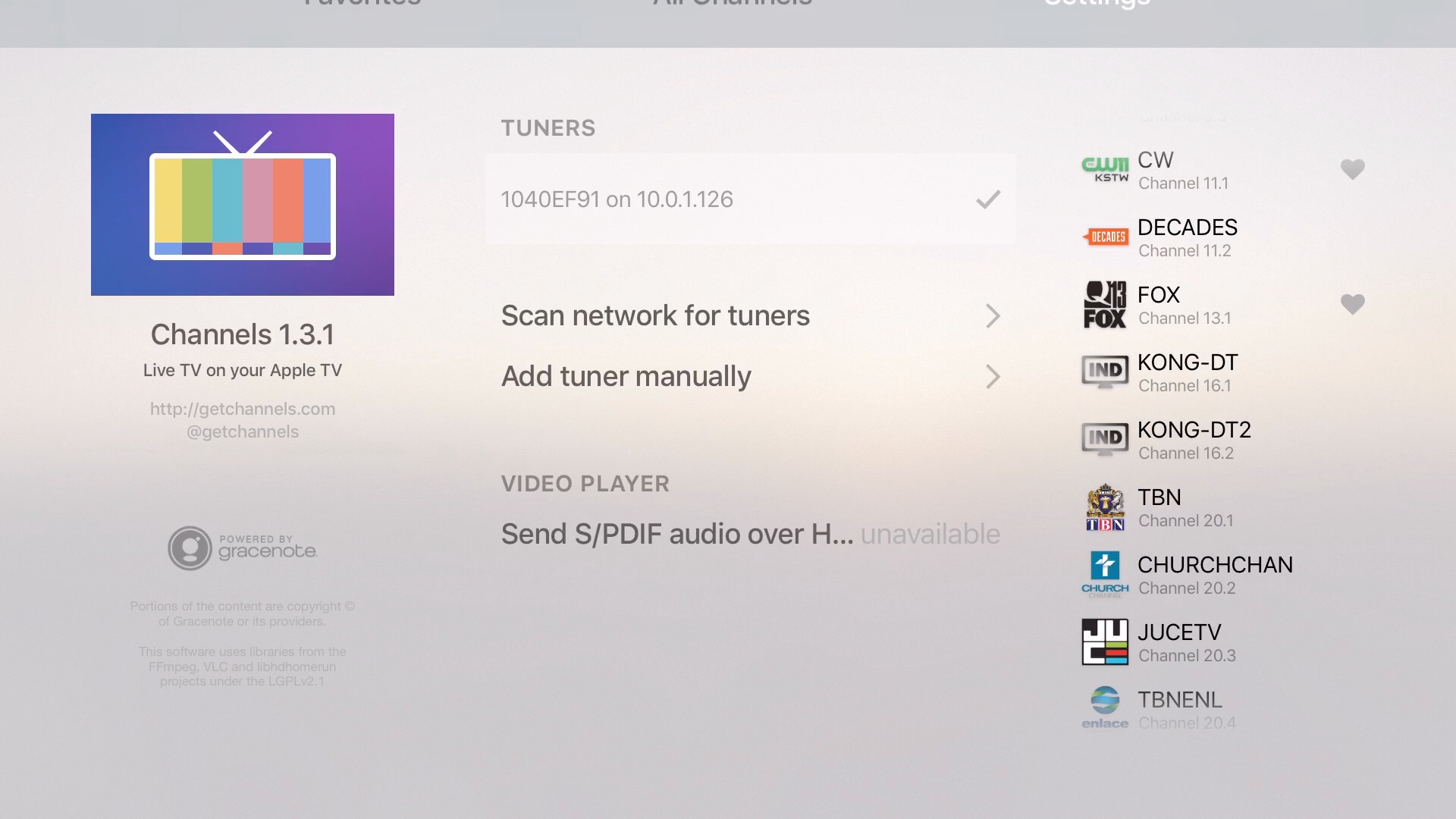 Channels 1.3 added support for the S/PDIF over HDMI format, which allows surround sound to be decoded from OTA broadcasts and passed through your Apple TV’s HDMI connection to a properly equipped stereo system. If you’re not sure about your setup, follow the Channels FAQ’s setup steps, and: “If your audio setup does not understand S/PDIF, you will hear white noise or a clicking sound.”

You change channels by using the Favorites or Channels views, which you swipe among at the top of the app. In either view, Channels uses local programming information, which it determines based on station call letters and other data, to show you what’s playing. Where possible, it also shows a splash screen for a movie or other program. Select a channel to tune, and a banner at the bottom shows any program detail available. 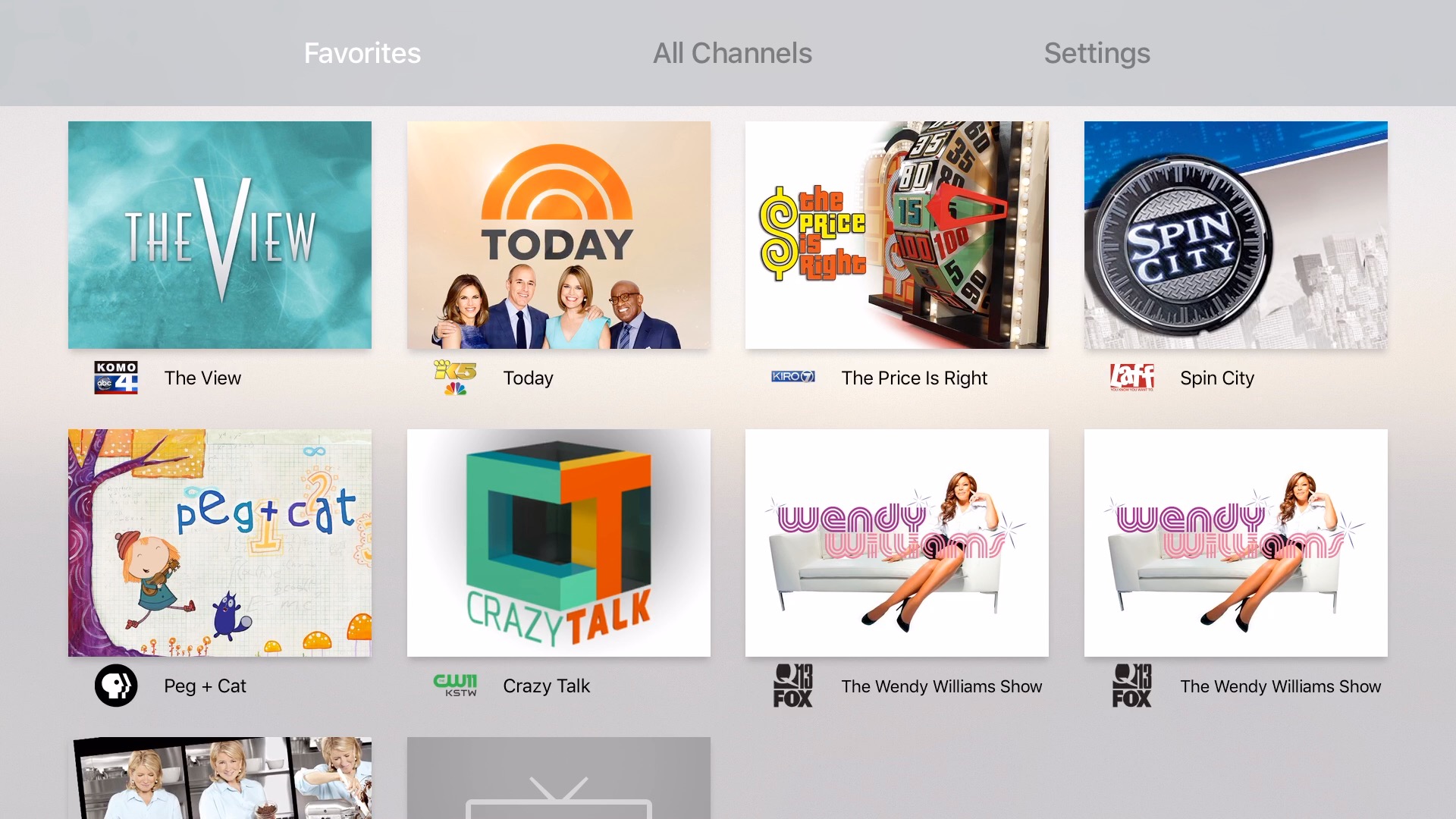 Once tuned in, you can swipe left or right on the Siri Remote to flip channels, and the bottom banner shows information about that channel. Click the touchpad to switch to that channel and, after switching, double-click to return to the previous channel. 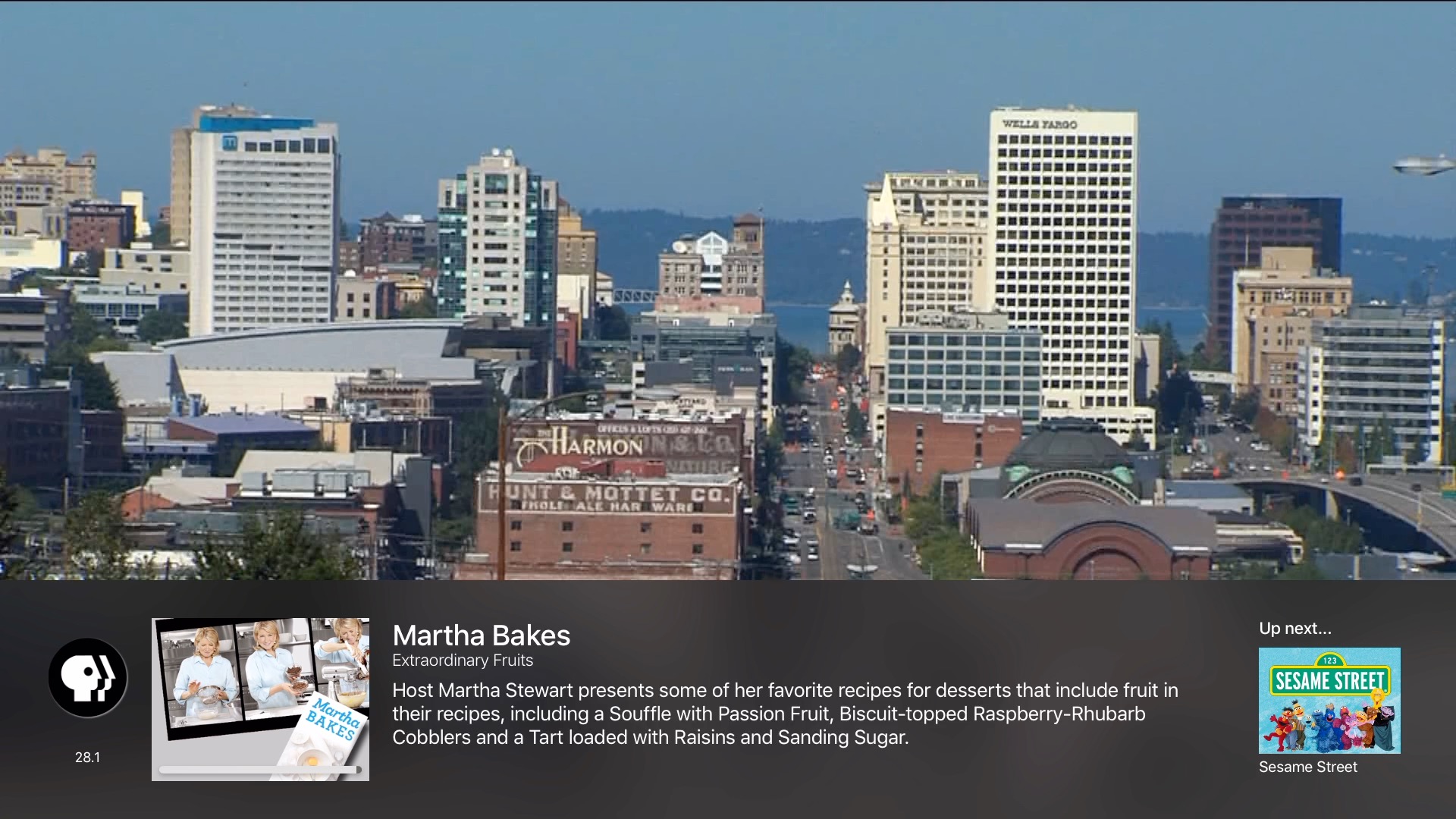 That’s it. Remember, we’re talking about live TV, so there isn’t much more to it than viewing a program guide, switching channels, and watching TV.

What if you subscribe to cable TV too? Channels may be able to display cable TV programming on your Apple TV as well. To do so, you would need a CableCard, which is a rentable device that can make third-party equipment act as a cable box, and use that with SiliconDust’s HDHomeRun Prime tuner. Unfortunately, getting a CableCard from your cable provider may require a lot of hassle, if it’s even possible at all.

This configuration lets Channels go beyond just OTA programming to carry two of three kinds of cable channels: ClearQAM, which is unencrypted (and doesn’t require a CableCard at all) and encrypted cable that gets descrambled by the CableCard. The third kind, DRM-protected channels, are typically used for premium programming like HBO, by some networks like Fox, and by some cable operators for all programming (notably Time Warner Cable), and can’t currently be decrypted by the Channels app. Its developers are looking into a certification that would let their app decode DRM-protected channels as well. Check with your cable provider if you want to go the CableCard route to figure out which channels might be affected — there’s no
national directory, unfortunately.

One final note. Since the HDHomeRun devices have two or three tuners, you can even watch live TV from two or three Apple TVs. Need to support four or more Apple TVs? Just add another HDHomeRun device, and the Channels app will automatically find a currently unused tuner on your network, scanning through the available hardware to locate a free slot. An unusual setup, perhaps, but some people take their TV seriously.

I’ll be the first to admit this is a lot of hardware and software. You’ll need an HDHomeRun, an antenna, and possibly a CableCard, plus EyeTV software and the tvOS Channels app. But once set up, it works astonishingly well. Channels provides the missing piece in a solution that lets me use the Apple TV for streaming services like Netflix, playback through iTunes from recordings made by the software DVR EyeTV, and now live broadcast viewing.