A drawback to digital media players like the Apple TV is that the formats they can play are often quite limited. Here are the types of video the 4th generation Apple TV can play, according to Apple’s technical specifications:

Those are common video formats, especially in the Apple world, but an out-of-the-box Apple TV can’t play many others that you may run into on the Internet, such as .avi, .flv, .mkv, and .wmv. In the past, you would have had to convert such videos to a format compatible with the Apple TV, but since the new Apple TV allows independent apps, developers were quick to release video players that support more formats natively.

Plex has become the de facto standard for alternative media management and playback. It uses a client/server architecture, which puts most of the stress of transcoding video from a wider variety of formats on the server, usually your Mac. The advantage of this design is that there’s a Plex front end for many platforms, even including so-called “smart TVs.” There’s also FireCore’s Infuse, which can connect to a Plex server or SMB shares, but transcodes video within the app itself. But both of these require that you store all your video on a Mac acting as a server.

Another option has now emerged for the Apple TV: the venerable open-source video player VLC. It offers many of the features of Infuse, along with a feature that users have wanted for years: video storage on the Apple TV itself.

Apple’s philosophy behind the Apple TV has long been that it’s a satellite device, dependent upon the cloud or a computer running iTunes for storage. But that’s problematic for users who have weak Internet access or unreliable Wi-Fi. And even that may not be enough for some content — I’m lucky enough to have great connections, but my Apple TV still struggles to stream the 19 GB “despecialized” edition of “Star Wars Episode IV: A New Hope.”

When you open the VLC app on the Apple TV, the first tab is Local Network, which lets you play video from Plex, SMB, and FTP servers. But if you want to download video to your Apple TV to avoid streaming problems, go to the second tab, Remote Playback. Click Enable Remote Playback, and you’re presented with two URLs: one with an IP address, and another based on your Apple TV’s nickname (configured in Settings > AirPlay > Apple TV Name). These URLs are accessible only on your local network. Go to your Mac, which must be connected to the same network as your Apple TV, open a Web browser, and enter whichever of the URLs seems easier — they’re equivalent. You’ll probably also want to bookmark this page for later access. 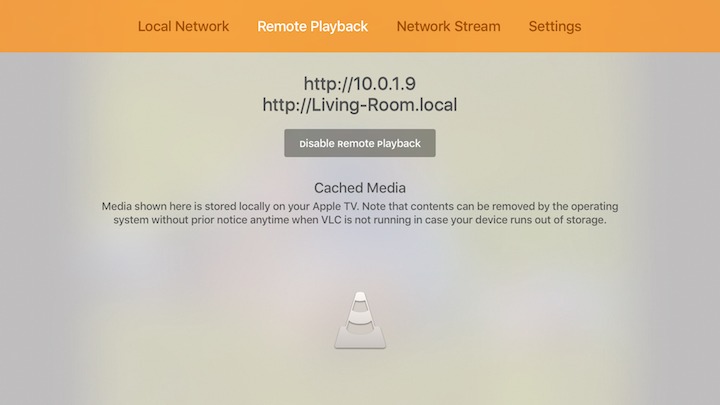 To send a video to the VLC app on your Apple TV, just drag it from the Finder into your browser window. If that doesn’t work on your browser, click the plus button to use the file picker dialog instead.

But before you go filling up your Apple TV with videos, let’s discuss the limitations. First, the Apple TV doesn’t have a lot of storage, either 32 GB or 64 GB before you started loading apps, and if you try to send a video that’s too large, the error message won’t be displayed in the browser, but in the VLC app on your Apple TV. Also make sure that your video is in one of VLC’s many supported formats, and be aware that VLC cannot play DRM-protected videos from the iTunes Store (unless you find a way to remove that protection).

Once you drag a video into your browser, a progress bar appears. How long the transfer takes depends on the video size and the throughput of your LAN connection. When it’s complete, open VLC on your Apple TV and go to the Remote Playback tab if you’re not there already. The video should show up at the bottom of the screen. Highlight it and press the Siri Remote’s touchpad to play it. 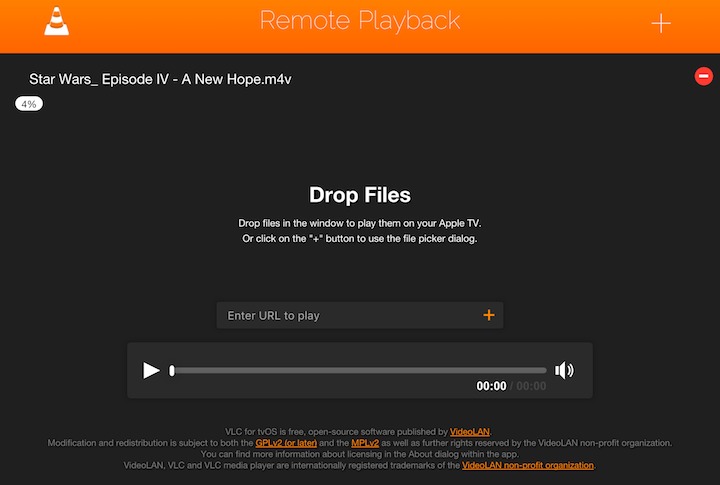 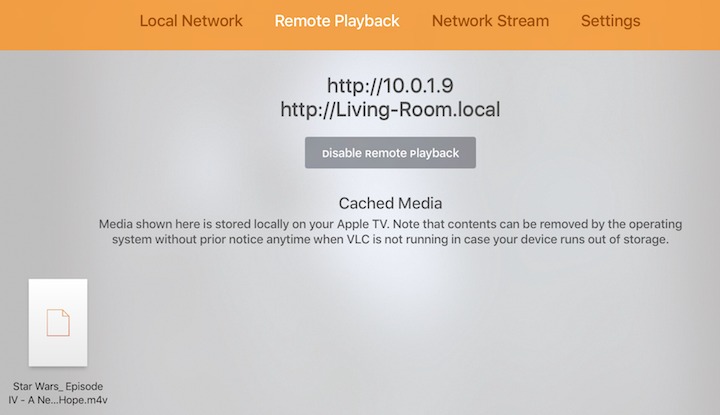 VLC’s video player is slightly different from any other Apple TV video player I’ve used. All the basic video controls work as usual, even Siri commands, but if you swipe down on the Siri Remote’s touchpad, you’ll notice some changes in the information panel. The first tab, Track Selection, lets you choose
an audio track and also download subtitles on the fly from OpenSubtitles.org, which is a nice feature. The Playback Speed tab lets you adjust how fast the video plays, which might be useful for talks or educational videos. Finally, there’s a Media Information tab with data about the video length, format, and audio. 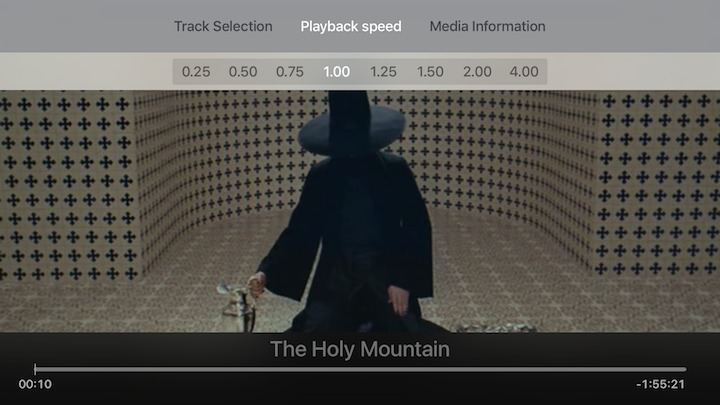 When you’re finished watching, you’ll likely want to delete the file from your Apple TV to free up space. To do so, return to the Remote Playback tab, highlight the video, and press the touchpad until it begins to shake. Then press the Play/Pause button and choose Delete.

If you have trouble streaming video to your fourth-generation Apple TV, give VLC a shot, though be aware that VLC has its own quirks. When streaming from my Plex server, the video sometimes spontaneously cuts off and jumps to the next video; happily, I haven’t seen this issue with Remote Playback content. The VLC team has put out quality software for a long time, so I expect that this bug will be resolved soon. Also on the horizon is support for loading videos from cloud storage services, like Dropbox, OneDrive, and Box.

On previous generations of the Apple TV, a jailbreak would be necessary to go beyond the limited capabilities provided by Apple. The mere existence of software like VLC and Plex for the fourth-generation Apple TV shows how the promise of the platform is being realized.

Comments About VLC Lets You Cache Videos on Apple TV