AgileBits last week released version 6.0 of its famed password manager 1Password for Mac (followed shortly by version 6.0.1, which rolled in a couple of small but important bug fixes). The update, which is free to owners of 1Password versions 4 and 5 (upgrade prices for version 3 and older vary), adds a number of useful features, including support for the new 1Password for Teams service.

1Password, which has been around since 2006, is an app that aims to alleviate password hassle by generating, remembering, and filling in passwords and their associated usernames, as well as syncing that information across all your devices. It also stores credit card information, serial numbers, secure notes, and virtually any other type of data you want to keep safe. I’ve used the app almost since day one, and I’ve long been impressed by its capabilities, as well as the frequent updates that have made it increasingly useful over the years. 1Password 6 continues that trend.

It also gains full documentation in the form of a completely revised second edition of my book “Take Control of 1Password,” which covers the latest versions of 1Password on all supported platforms (OS X, iOS, Windows, and Android) for those who want to access their passwords securely no matter what device they’re using.

New in 1Password 6 for Mac — Here are the most significant new features: 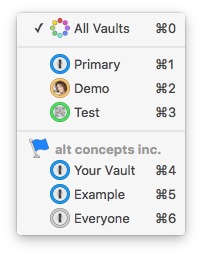 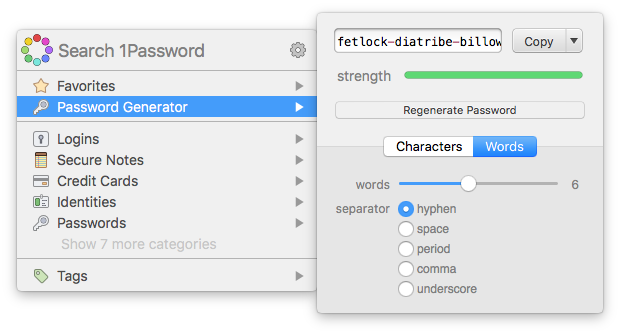 1Password 6 for Mac is a 48.1 MB download. Pricing for new customers remains unchanged; it’s $49.99 whether you purchase it from the AgileBits Store or from the Mac App Store, although TidBITS members can save 25 percent by purchasing through the AgileBits Store. Licensing details differ slightly between the two venues. If you purchase directly from AgileBits, you can share a single license with up to six people in a single household (and each person can use it on more than one Mac). If you purchase it from the Mac App Store,
you can use it on all your Macs that have signed in with the same Apple ID; you can also share it with a total of six family members, but only if you use iCloud Family Sharing — see my explanation in “Digital Sharing for Apple Users: A Take Control Crash Course”.

1Password is also available for iOS, Windows, and Android. In addition, a completely rewritten “Windows Modern” version of 1Password, which runs only on Windows 10, is in public beta testing. Each platform is licensed separately. The Windows version costs $49.99, just like the Mac version, but you can buy a combination Mac and Windows license for $69.99 (again, less 25 percent for TidBITS members). The iOS
and Android versions of 1Password are free, with optional $9.99 in-app purchases of Pro features (including custom fields, folders and tags, additional categories, and — for iOS only — Apple Watch support).

While 1Password hasn’t quite reached feature parity on all four platforms yet, the versions have moved much closer together in both features and interface in recent months, so users familiar with 1Password on one platform should have little difficulty adapting to the others.

Take Control of 1Password, Second Edition — Back in September 2013, we released the first edition of “Take Control of 1Password,” a book I wrote to help new 1Password users find their way and get up to speed quickly, while showing experienced users how to get the most out of 1Password’s more advanced features. Prior to last week, the book’s most recent update was in April 2014. Despite the title’s popularity (the first edition sold over 5,500 copies!), it had been growing increasingly out of sync with the currently shipping versions of 1Password, and for one reason or another, scheduling difficulties came up every time we discussed a new edition. I’m
delighted to say the planets have finally aligned, and “Take Control of 1Password, Second Edition” is now available and is totally up to date with 1Password on all four of its platforms.

As new editions go, this one was a doozy. The book, which has grown to 174 pages, covers not only the recent changes in 1Password for Mac, but also the huge list of changes that took place over the previous two years — plus significant new features in the Windows and iOS versions and a complete overhaul of the Android version. It also adds an entirely new chapter on 1Password for Teams.

Regardless of which platform(s) you use, your chosen sync method(s), and your level of expertise, you’ll find loads of useful details, tips, and general guidance in this book. If you downloaded 1Password at one point but never got past the “dabbling” phase, the book will help you unlock its full potential. And even if you’ve been using 1Password for a while, you will likely discover capabilities you haven’t been putting to their full use. (For example, while writing the new edition, I started using 1Password’s time-based one-time password capability, which enables it to replace apps like Google Authenticator and Authy for generating secondary passwords that change every 30 seconds, a requirement of many sites that use
two-step verification. Already that feature has saved me oodles of time and effort.)

The book’s cover price is $15, but we gave a free copy to everyone who purchased from us since 1Password 5 came out in October 2015 (look in your Take Control Library), and anyone who bought a copy of the first edition before that can upgrade to the new edition for half price, or $7.50. For details, click Ebook Extras on the cover of your existing copy.