I was recently updating the photos chapter of my upcoming second edition of “Take Control of Apple TV,” and I was disappointed with the Photos app on the fourth-generation Apple TV. It works, but offers no functional improvements over the iCloud Photos app on the previous Apple TV.

Photos on the Apple TV supports only two Apple services: My Photo Stream and iCloud Photo Sharing. Strangely, it omits Apple’s newer and much-touted iCloud Photo Library (it’s reportedly coming in the next major software update). Some have explained this by saying that you don’t want every photo you take to appear on your Apple TV. That’s somewhat true, since many of us take a lot of random photos with our iPhones. But if that’s the case, why does Apple include Photo Stream, which does much the same thing? And iCloud Photo Sharing works fine (we use it to share photos of our son with friends), but people outside the Apple ecosystem can only view photos, not add their own.

Of course, using the iOS Photos app in conjunction with AirPlay is always an option for displaying your photos on the Apple TV, but that requires you to keep the app open and do everything from the iOS device. (If you receive a text message and switch over to Messages, your photos vanish from the TV.) AirPlay is a good solution for ad hoc slideshows, but it’s less than ideal for showing off large collections of photos.

Thankfully, since developers can now write apps for the Apple TV, there are alternatives that can display photos on your Apple TV. Here are the most promising apps I’ve discovered so far, all of which are free for basic usage.

Bundle — The Bundle app focuses on automatically sorting the photos from your Camera Roll into “bundles,” a fancy name for albums. The iOS version of Bundle won me over right away with its 1Password integration at the login screen. In less than a minute, I was able to tap the 1Password button, create a new login for Bundle in 1Password, generate a secure password, and start using the app.

Bundle takes the work out of creating photo albums, starting with the setup wizard, which helps you create your first bundle. The first time around, it picked up all the photos I took at Macworld/iWorld 2014. Another try found all my wedding photos. You can also choose to protect each bundle with Touch ID. 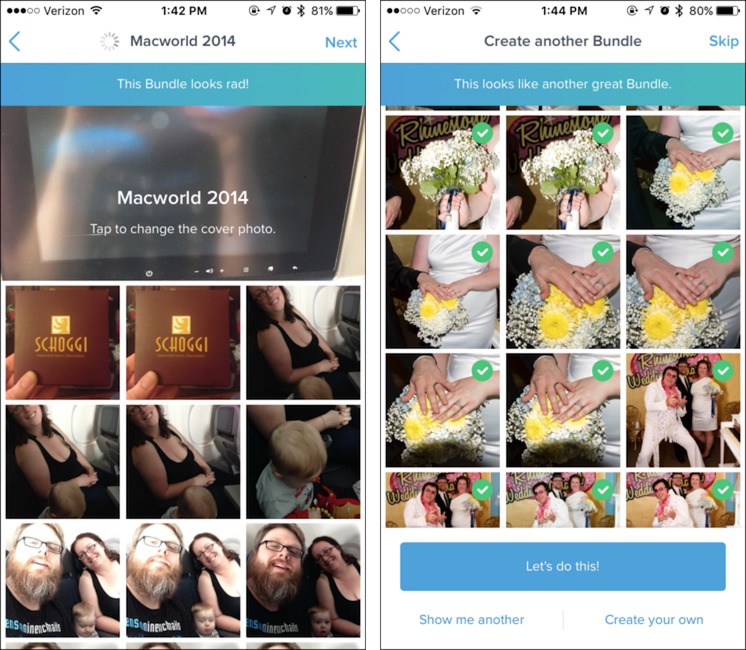 Bundles and individual photos can be shared via a URL, but you can also invite friends and family to your bundle so they can add their own pictures of an event to complete the story.

The Apple TV app isn’t as good as the iOS app. It’s bare bones, simply displaying the bundles and photos within. But in my testing, it didn’t even succeed there. The main screen showed three bundles: Macworld 2014, Wedding, and a blank Test bundle that I had created and then deleted on my iPhone. Of the three (one of which wasn’t even supposed to be there), only the Macworld 2014 bundle displayed the photos; the Wedding bundle was empty. 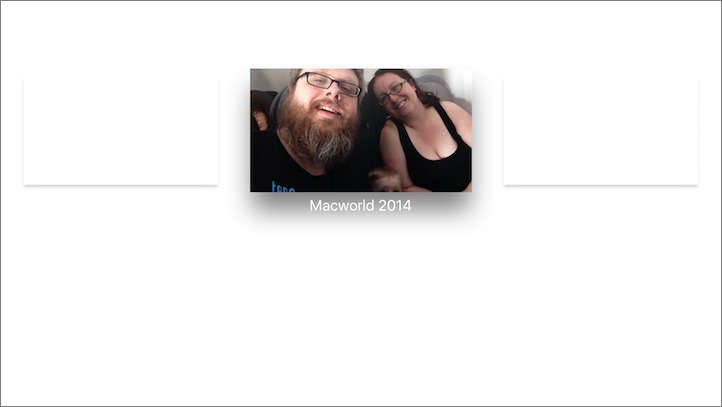 For that reason, I can’t yet recommend Bundle for the Apple TV, but the iOS app is fantastic. I hope the developers get things sorted out, because Bundle would otherwise be a terrific app.

Flickr — Ah, the old standby. A longtime favorite of photographers, Flickr was the only way besides iCloud to view your own photos on previous Apple TVs.

Flickr is on the new Apple TV, and the app does a competent job of displaying your photos and photos of those you follow. You can also view all albums as slideshows.

Alas, the app is identical to the one on the old Apple TV, even down to the Screensaver button, which now just displays an error message. I can understand an Apple TV app redesign not being high on the Flickr team’s priority list, but the fact that they didn’t even bother removing a non-functional button is disappointing. 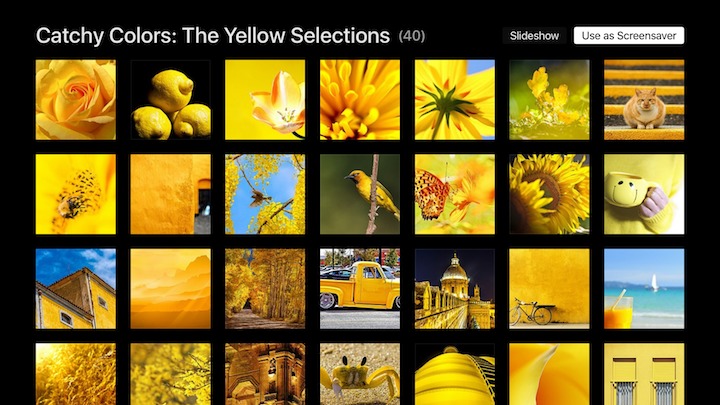 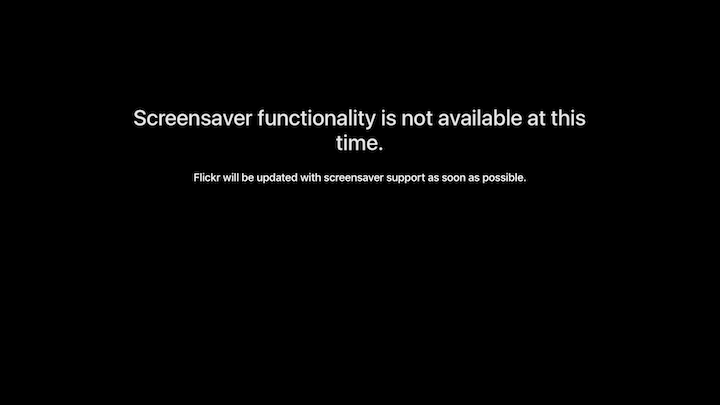 Due to the sorry state of the app and the dire financial straits of parent company Yahoo, I can’t recommend Flickr for new users. However, if you’re already invested in Flickr, the app is worth installing.

Storehouse — A simple solution for sharing photos, Storehouse specializes in what it calls “stories,” yet another fancy term for albums. Storehouse works across platforms, with apps for Apple TV, iOS, Android, and the Web, and it lets you share your stories via a simple URL. Storehouse can also import photos from Dropbox, Flickr, and Instagram.

Storehouse also has a feature called Spaces, which is a collection of stories. You can share a space with friends and family so that you can all share stories, photos, and videos.

Once you create a story on your iPhone or iPad, open the Storehouse app on the Apple TV and log in. Your stories will be right there on your TV screen. 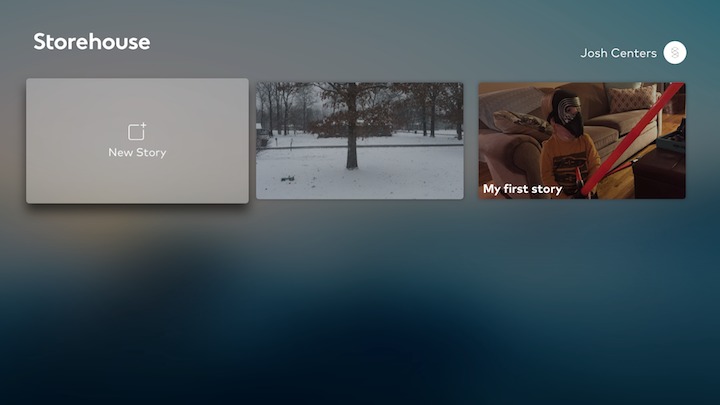 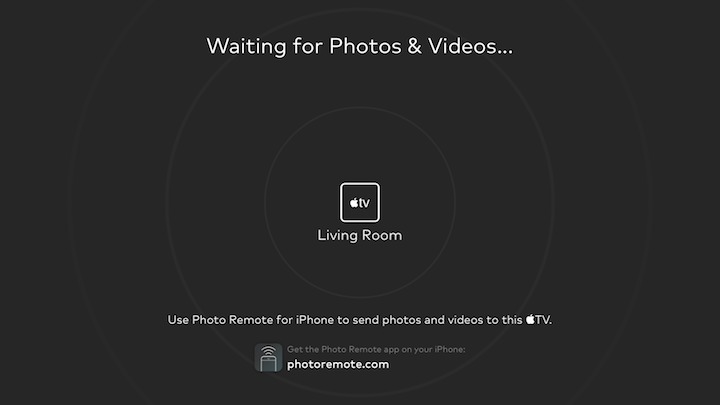 Photo Remote’s most interesting feature is that you can use it to take photos and videos, with filters, that then appear directly on your Apple TV. Since Photo Remote doesn’t require a login, anyone in the house can take photos for display on your TV. You can also select photos from your Camera Roll to add them to the story on your TV. When you’re finished, press Menu on the Siri Remote, which gives you three options: Save Story, Continue Editing, and Delete. If you choose to save the story, it’s uploaded to
the collection of stories in your Storehouse account. 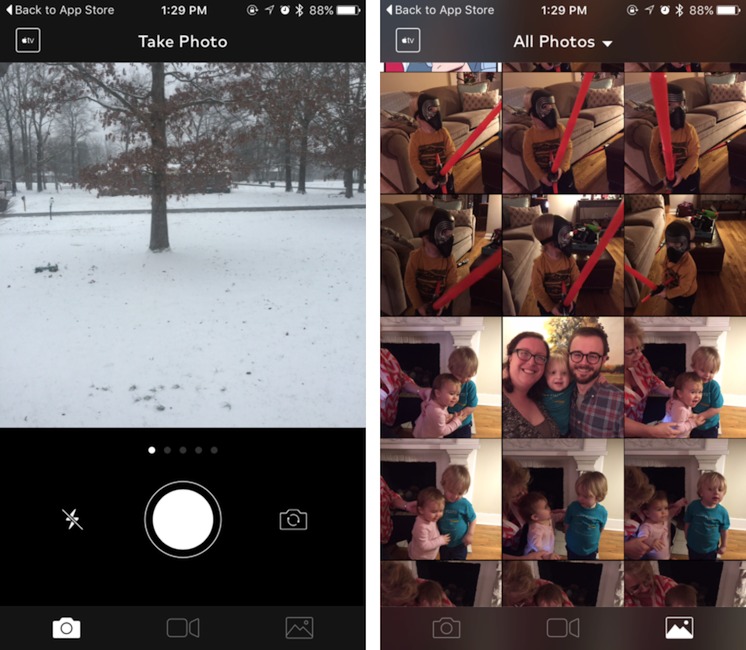 Sadly, Storehouse doesn’t have a Mac app, and while its Web app can display photos, it doesn’t allow any manipulation.

Slidez — Of all these apps, Slidez is the only one built around the Apple TV and the only one that can display Live Photo movies taken with an iPhone 6s.

Helpfully, it doesn’t require you to enter a username and password on the Apple TV itself. Instead, it directs you to a Web page, where you enter an activation code and create an account. You can also choose to skip account creation entirely, though that’s not recommended. 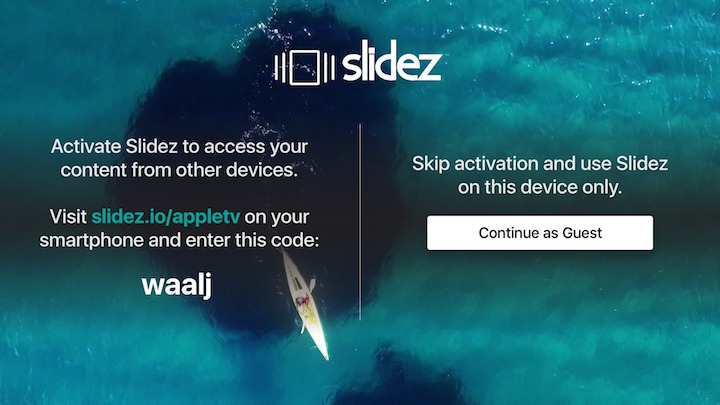 To add photos to Slidez, first click the Add button on the main screen and name your album. Then open the album and click the Add button there. You can then either visit a special URL and enter a code to upload photos or use the companion Slidez app for iOS. Select your Apple TV in the iOS app, and then browse through your Camera Roll. As you select photos in the app, you can watch them being uploaded to the Apple TV.
Press Menu on the Siri Remote when the photo uploads have completed. 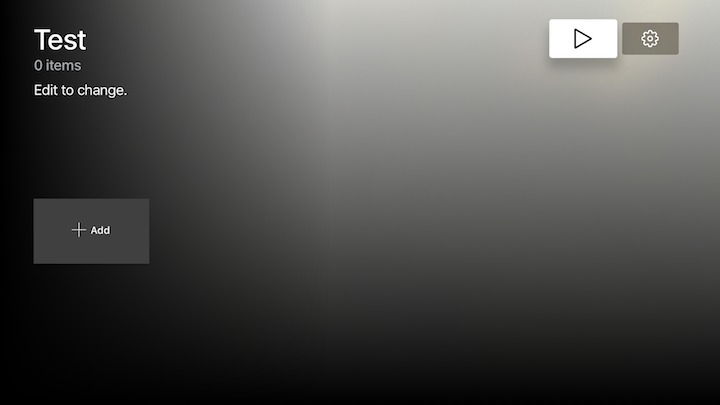 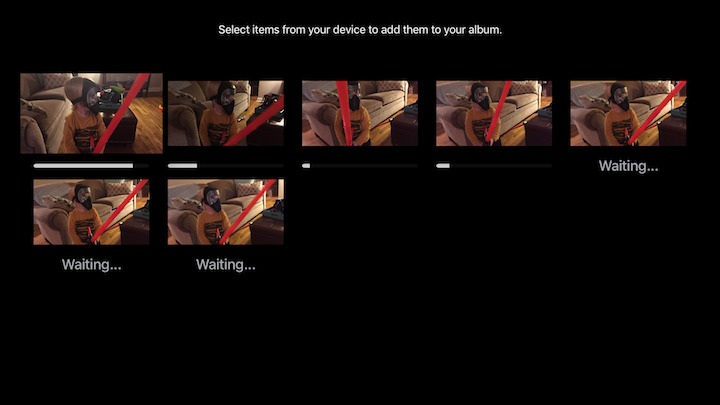 As its name implies, Slidez specializes in slideshows. While viewing an album, click the play button in the upper right to begin a slideshow. The settings button next to the play button lets you adjust things like slide duration, transitions, and whether or not to play Live Photo movies automatically.

Unfortunately, Slidez doesn’t offer any ways to share albums or individual photos with others.

Recommendations — If you’re looking for an app solely to store and display photos on your Apple TV, try Slidez. It’s simple, you can add photos from a browser, and it’s the only one that can display Live Photos.

However, Slidez isn’t a good general photo management solution due to its lack of sharing and collaboration. For that, check out Storehouse, which offers those features in a slick Apple TV app. However, it doesn’t have a desktop solution other than its anemic Web app.

Bundle has a lot of promise, thanks to its smart photo grouping, but its crummy Apple TV app sours the experience at the moment. In the meantime, if you’re looking for a photo grouping solution on iOS, take it for a spin.

I wish I could recommend Flickr, as the service offers everything a photography enthusiast could ask for. However, the dated and partially broken Apple TV app makes me leery to suggest it to anyone other than diehard Flickr users until it’s updated.

Although it’s unfortunate that these apps aren’t better, there are other interesting things going on with regard to Apple TV and photography, mostly beyond the scope of this article. For instance, PhotoWall+ lets party guests use their iOS devices to take pictures that then appear on the Apple TV. Photone looks like a promising photo viewer but works only with Microsoft OneDrive. Apps like 500px and VSCO let you browse thousands of great photos, but aren’t photo management apps
themselves.

If you’ve stumbled across an interesting photography app for the Apple TV, tell us about it in the comments!

Comments About Four Alternatives to iCloud Photos on the Apple TV