Apple has issued a recall for some two-prong wall plug adapters designed for use in Argentina, Australia, Brazil, Continental Europe, Korea, and New Zealand. (See, international readers — it’s not all about the United States!) These adapters shipped from 2003 to 2015 with various Apple devices. The danger is that the prongs may break off and create an electric shock risk.

To be clear, we’re not talking about the entire AC adapter for Apple’s notebook computers and iOS devices — just the small removable portion that plugs into the wall outlet. Nor does this recall affect corded wall plug adapters — just the short, rectangular two-pronged adapters. 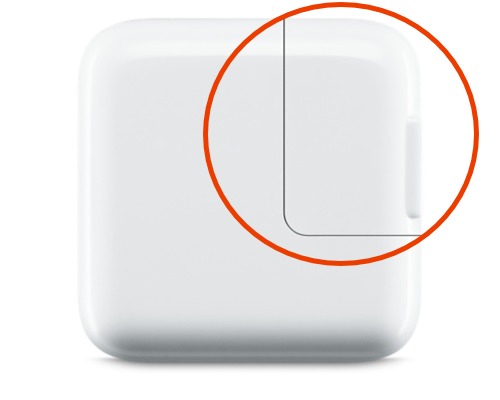 To see if your wall plug adapter is covered by the recall, slide it out and look at the slot on the underside of the adapter. Recalled adapters have a four- or five-digit code stamped into the slot, or no characters at all. Newer power adapters, which are not affected by the recall, have a three-letter regional code (ARG, AUS, BRA, EUR, or KOR) printed in the slot.

To exchange the wall plug adapter, you’ll either need to schedule an appointment with your nearest Genius Bar or contact Apple Support. Either way, you can start the process at Apple’s support portal. Apple needs to verify the serial number for the Mac or iOS device that goes with the power adapter, so look for that in advance.