We asked you to rate the Mac personal finance software that’s near and dear to your heart (or that had let you down), and nearly 700 TidBITS readers answered our survey of 34 apps with close to 1,400 votes (see “Vote for Your Favorite Mac Personal Finance App,” 17 February 2016). We found that the landscape for finance apps is still dominated by Intuit’s Quicken, but there are several alternatives that our readers recommend wholeheartedly.

All four versions of Quicken in our survey made the top ten in terms of vote count, with varying ratings. While few apps elicit the level of contempt and resignation as the most recent Quicken editions, Quicken 2007 finished near the top for both vote count and ratings. To paraphrase the band Chicago, Quicken can be a hard habit to break. Quicken 2007 user Paul Brown voiced his reluctance in testing other finance apps. “You can’t do a good evaluation of any financial management application without really using it for some significant time period,” he said, “and meanwhile you want to keep your data entry current in your current application, doubling the time and effort spent doing your bookkeeping while also doing new app
evaluation.” Despite the extra work, he continues to explore alternatives (particularly SEE Finance), as he’s worried about Quicken’s long-term viability due to Intuit’s plan to sell it (see “Intuit to Sell off Quicken,” 24 August 2015).

Still, some have found alternatives to the Quicken quagmire. Here are a few takeaways:

When it came time to evaluate the results, we calculated the weighted average for each app, assigning a weight of 1 (Avoid it) through 5 (Can’t live without it) for each the five choices — the best weighted average possible is thus 5. Apps that received only a handful of votes have skewed weighted averages, of course, so we also counted the raw number of votes each app received.

Here’s the full list of financial apps, sorted by number of votes. We offer rating graphs and commentary for the apps that garnered the most votes; for the rest, the research is up to you, since only you know what features are important. Focus on apps that have free trial versions and strong import capabilities, since you’ll want to get some experience with the app before you commit to it, and because you’re likely to want to use this app for years, stick with apps that are getting regular updates.

The cumulative 800-pound gorilla of Mac finance apps, four editions of Quicken made it into the top ten — Quicken Essentials, Quicken for Windows, Quicken 2015/2016, and Quicken 2007 — with a total of 602 votes. In terms of rating and votes, Quicken 2007 topped the Intuit list, and many commenters pointed to the comfort they felt in continuing to use a now-discontinued app first released over eight years ago. Doug Hogg said, “It’s like an old shoe — I know how to work it, so I am not changing until I have a very good reason.” Andrew Malis noted that Quicken 2007 is “creaky around the edges — I periodically have to rebuild the database — but it continues to work solidly even with a 30 MB database and transactions going
back to 1992.”

John F. Richter added that Quicken 2007 “does everything I need it to do very well. I have been using it from early versions to balance my check books, credit card accounts and maintain my assets and have 15 years of history accumulated. What I like about it is the flexibility of reporting to facilitate tax accounting, reconciliation of accounts, and asset management.” He did try Quicken 2015, but “was reluctant to commit to this weaker version.”

This echoes the main theme that readers cited in not moving to newer editions of Quicken or alternative finance apps — the features work well in Quicken 2007 and haven’t been replicated elsewhere to satisfactory levels. Kelvin Smith said, “I find that the recent versions of Quicken are not useful primarily because they lack annual budgeting.” Edward Pittman has tried other options, but has returned to Quicken 2007 due to cumbersome data entry and less-flexible charts and reports. Dave Creek added, “Quicken 2007 still has by far the best report feature, including custom reports.”

It’s notable that this comment from GraniteDon was the highest praise anyone could muster for the latest editions of Quicken: “While Quicken 2016 still lacks some features compared to Quicken 2007 (notably loan amortization), I am satisfied with it and would not consider any other software as long as Quicken is available.”

Both Quicken for Windows (when used in a virtual machine) and the discontinued (and much reviled) Quicken Essentials also placed in the top ten for votes, with Quicken for Windows receiving the ninth-best rating (3.04) from 55 votes. It’s probably an option mostly for people already comfortable with Windows. Despite receiving the fifth-most votes (130), Quicken Essentials has the worst rating of the top ten with a dismal 1.62 — it clearly won’t be missed. 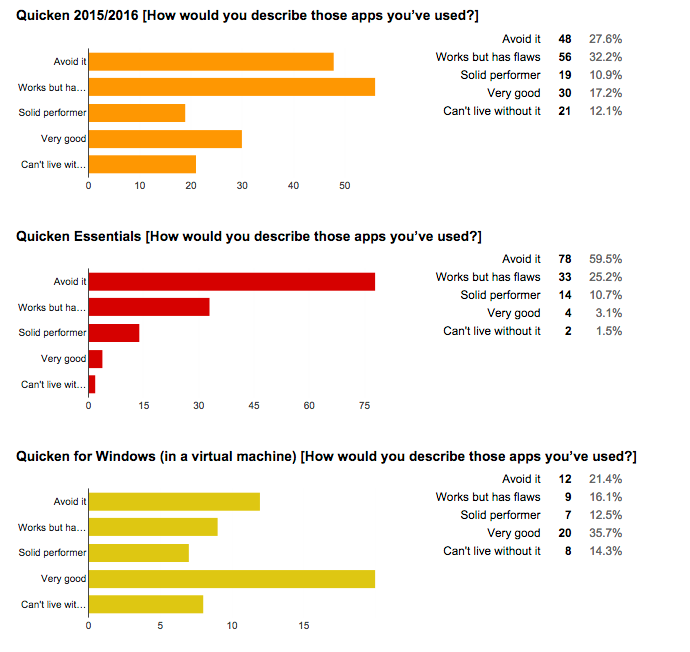 After going by the name “iBank” for 13 years, our survey’s top vote-getter and third-highest rated app recently underwent a name change to Banktivity (see “Banktivity 5.6.5 (formerly iBank),” 8 February 2016), which IGG Software says is derived “from joining ‘bank’ and ‘activity.’” The company says that it’s easy to import accounts, transactions, categories, and investments from Quicken, and several commenters supported this claim. Martin Zibulsky started using iBank four years ago, and found that importing and converting data from Quicken 2007 was indeed easy. Eckart Goette
appreciated its tracking of international investments and activities, adding, “The multi currency feature is very helpful. I don’t miss Quicken and applaud Banktivity for their innovative features.” Still, the app is not without its frustrations, as commenter Ray said that date handling and scheduled transactions are not as easy to deal with as in Quicken.

Banktivity enables you to use OFX direct connect banking (support varies by bank), and it also includes an integrated Web browser for downloading files from a bank’s Web site. If neither of these options work with your bank, IGG Software also offers the optional Direct Access service (which can be accessed via the Mac app and its two iOS apps), which connects to thousands of banks worldwide and costs $39.99 per year. Unlike Intuit’s free Quicken 2014/2015/2016 Money Management universal iOS app, the Banktivity for iPad app costs $19.99 and Banktivity for iPhone is $9.99 (with the latter providing an Apple Watch app).

Receiving the highest rating of all the apps, Moneydance from The Infinite Kind has been an appreciated Quicken alternative for over a decade (see “Moneydance Eases a Tax Burden,” 11 April 2005). Several commenters gave props to Moneydance doing well with the basics — online banking and bill payment, account management, budgeting and investment tracking, and support for multiple currencies — and voters gave it the top rating. Rick summarized, “It does what I need, upgrades have either been free or reasonably priced, and support (rarely needed) has been very good.” Commenter Reebee added, “Moneydance has its quirks — the interface needs customization options, reports are too
limited, and it needs a proper find and replace option. But the learning curve to switch was easy, I had no trouble importing years of Quicken data, documentation is good, and customer support has been surprisingly helpful.”

While Michel Hedley was a bit frustrated in The Infinite Kind’s speed in making feature enhancements and improvements, Moneydance supports third-party extensions, and a number of free extensions are available to download directly from the company’s Web site (including a Find and Replace extension that could ease Reebee’s complaint). In addition to the Mac, Moneydance is available for Windows and Linux systems, and the free Moneydance Personal Finance Manager iOS app uses Dropbox to sync to Moneydance on your desktop.

The feature-rich SEE Finance from Scimonoce Software scored the second-best rating of the bunch, and it garnered accolades from commenters for its depth. Steven Mattson gushed, “As an owner of rental property I appreciate [its] transaction downloading capability, fast search engine, ability to create custom reports and tax code indexing. The customer support is the best I have had with any software.” Mac Bakewell chimed in, “I’ve been using SEE Finance since 1/1/11 to manage 20 separate checking, savings, investment, and credit card accounts in two currencies (U.S. dollars and Thai baht). While there is really nothing in my digital world that falls into the ‘can’t live without it’ category, SEE Finance continues to be a
perfect fit for my needs, just as it has since day one.”

MoneyWell from No Thirst Software garnered the sixth-best rating, with most of its votes giving it a vote of confidence as a solid performer. In addition to the standard ledger system found in other finance apps, MoneyWell uses an envelope-style budgeting system where you’ll assign balances in your accounts to certain buckets. Your expenses will drain those budgetary buckets, and they’ll get refilled each time you add a paycheck or other income. Joseph said, “I love the fact that it uses the envelope system. This is why I bought it in the first place. I don’t just want to track where I spend my money. I want to discipline it.”

Following a stall in development in 2014, No Thirst Software’s ownership was taken over by Kevin LaCoste after original developer Kevin Hoctor was hired by Apple, and updates have appeared more frequently over the last year. Charles E. Flynn has seen improvements, noting, “The program can now duplicate a split transaction, preserving all of the details. If only the QIF format could export split transactions properly, with all of the memo lines preserved, people would be able to move from one program to another easily.” MoneyWell offers two iOS apps — MoneyWell Express for the
iPhone and MoneyWell for iPad — and Joseph hopes that their revived development will smooth out what “has always been a squirrelly process.” However, Charlie Franklin switched to Banktivity because of problems importing QFX files and connecting directly to banks in Australia.

The Rest of the Personal Finance Apps — We can’t cover all of the 34 apps that we identified in detail, so for the remaining 26 apps, we’ve listed the number of votes, rating, and price, and included a link to the app’s Web site, along with a link to any available comments about it. Let us know in the comments if there’s a better way we could do it in the future.