I’m a country boy, and while I don’t exactly live in the big city now, working at a Mac all day doesn’t provide the ambience I remember from summer days on the farm. (This is, of course, selective nostalgia — making hay is hard, dirty, noisy work — so I beg your dispensation for some poetic license.) While I like listening to music in Spotify, there are times when I just want some background sounds that won’t distract me from what I’m writing. Spotify and competing services like Apple Music have plenty of tracks of thunderstorms, waves, and birds, but finding something appropriate is a serious rabbit hole.

Enter Noizio, a Mac and iOS app that I stumbled across recently. [Note: When reviewed, Noizio was free; it’s now $4.99 for Mac and $1.99 for iOS. -Adam] It offers 15 different ambient sounds that play in seamless loops: October Rain, Coffee House, Thunderstorm, Campfire, Winter Wind, Sea Waves, River Stream, Summer Night, Sunny Day, Deep Space, Sailing Yacht, Inside Train, On The Farm, Wind Chimes, and Blue Whales. Click a sound’s icon to enable or disable it, and move its slider to set how loud the sound should be. 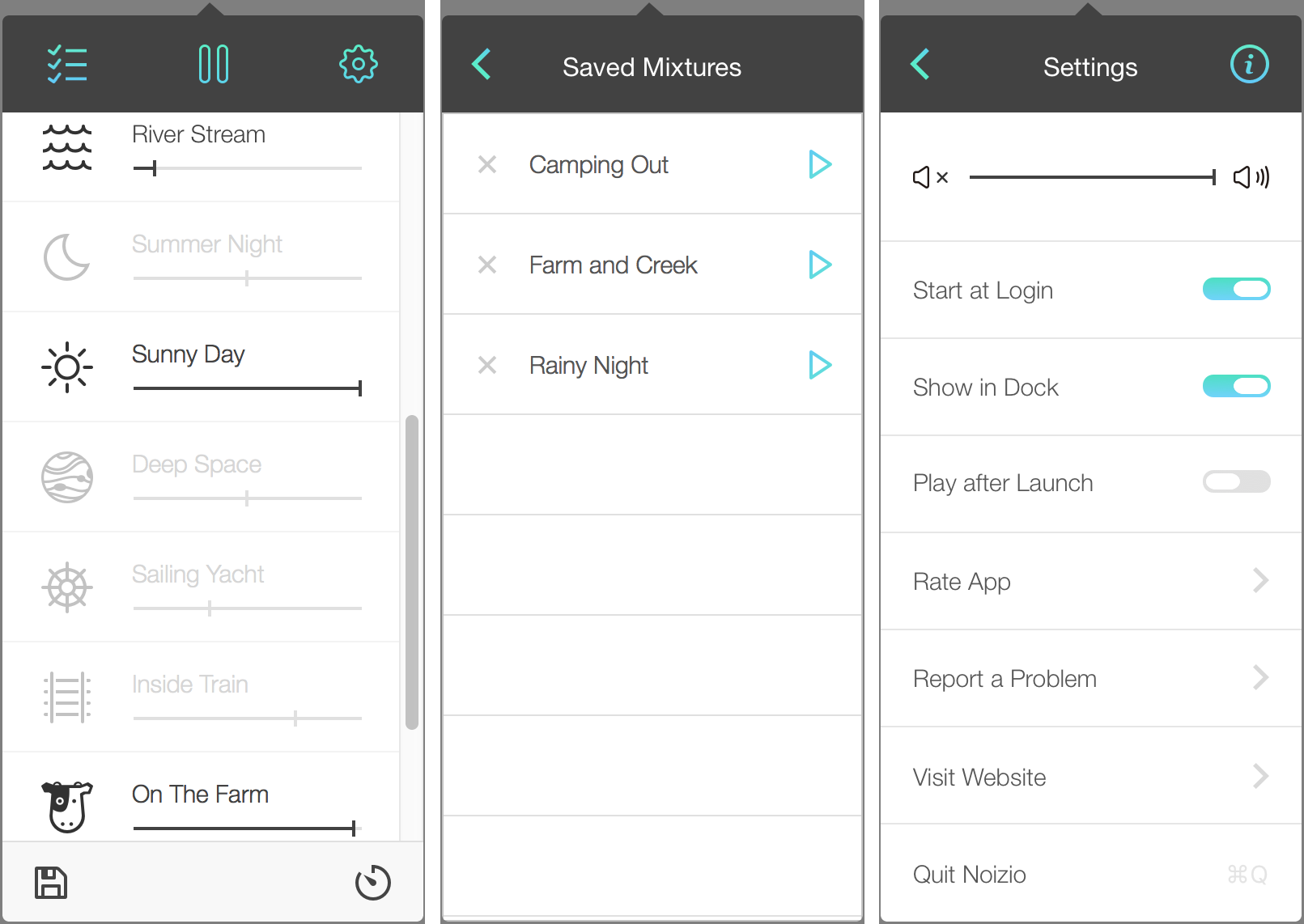 You might like just one of these sounds, but what sets Noizio apart is that you can combine multiple options into a personalized mixture, even blending the different sounds at different levels. It’s easy to save and switch between these soundscapes.

I must confess a certain lack of variability in my own usage. My preferred mixture is heavy on the bird songs in Sunny Day, with about half a dose of On The Farm, and just a touch of a creek in the distance courtesy of River Stream. At least to my ears, it sounds great — when I close my eyes, it’s easy to imagine the chickens scratching for bugs in the dirt and the cows ambling through the field below the house.

While writing this article, I created another mixture that combines October Rain, Thunderstorm, and Summer Night, but all those water sounds make me want to visit the bathroom. I’m also testing a mixture that’s mostly Campfire with just a few of the cicadas from Summer Night thrown in, but I find myself yawning when it’s on.

But that’s just me. Some people will undoubtedly like the muted bustle of Coffee House, or the repetitive clickety-clack of Inside Train. And those with some ocean experience might appreciate a combination of Sea Waves and Sailing Yacht. Some of the reviewers on the Mac App Store complain about gaps in the loops, but I haven’t noticed any issues there. Perhaps I’m not listening hard enough, but then again, not listening carefully is sort of the point. The loops themselves vary in length from about 15 seconds to over 6 minutes, so combining them ensures that the resulting mixture is even more random.

Developer Kyrylo Kovalin has done a nice job with Noizio’s interface. On the Mac, it installs as a menu bar icon, and clicking it displays a popover underneath. Big buttons on the top let you manage your saved mixtures and access settings for whether or not the app should start at login, show in the Dock, and start playing immediately after launch. The vertically oriented interface feels a little constrained on the Mac, but lends itself perfectly to the iPhone screen.

Speaking of the iOS version, there’s a feature that automatically pauses playback at a particular time, which is handy if you use your iPhone as a sleep aid. The only thing the iOS version of Noizio lacks is an option to save mixtures.

It might be nice to be able to add new sounds, but that would likely require more programming effort than such a simple app warrants. Those interested in spelunking through Noizio’s app package will discover that the app is built around Core Audio Format (.caf) loops, so it might be possible to replace some with your own loops. You’d need to be sufficiently motivated to figure out how to convert sound files to Core Audio Format using the afconvert app at the command line.

As with the browser extensions that put pretty pictures in new tabs (see “Momentum Brings Eye Candy to New Browser Tabs,” 16 December 2015 — I’m now testing Unsplash Instant), Noizio probably won’t change your life, but if bringing the sounds of a sunny country day into your office brightens a gloomy winter morning, it’s well worth the download.