At its March event today, Apple made a couple of small announcements: the 4-inch iPhone SE and the 9.7-inch iPad Pro. You’ll be able to pre-order both on 24 March 2016, and they’ll ship on 31 March 2016. Apple also announced some new accessories: a smaller Smart Keyboard cover for the new iPad Pro, a Lightning to USB 3 Camera Adapter, and a new Lightning to USB-C Cable that can connect to the MacBook’s 29W USB-C Power Adapter for faster charging.

iPhone SE — For all of you who missed the smaller phones in Apple’s lineup, rejoice! The 4-inch iPhone SE packs nearly all of the power of the iPhone 6s in a smaller form factor, with a few surprises thrown in. 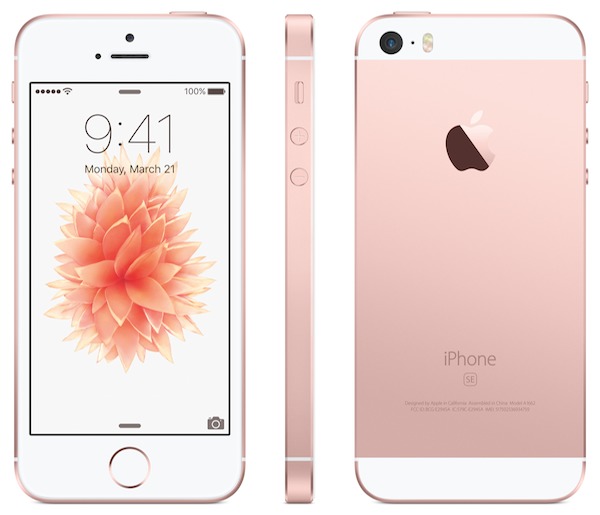 The iPhone SE will start at $399 off contract for the 16 GB model. With a contract, the phone will be free, or $17 per month (for 24 months) if you choose a carrier installment plan. There is also a 64 GB model, which will cost $499 off contract. It will be available in four colors: silver, gold, space gray, and rose gold. 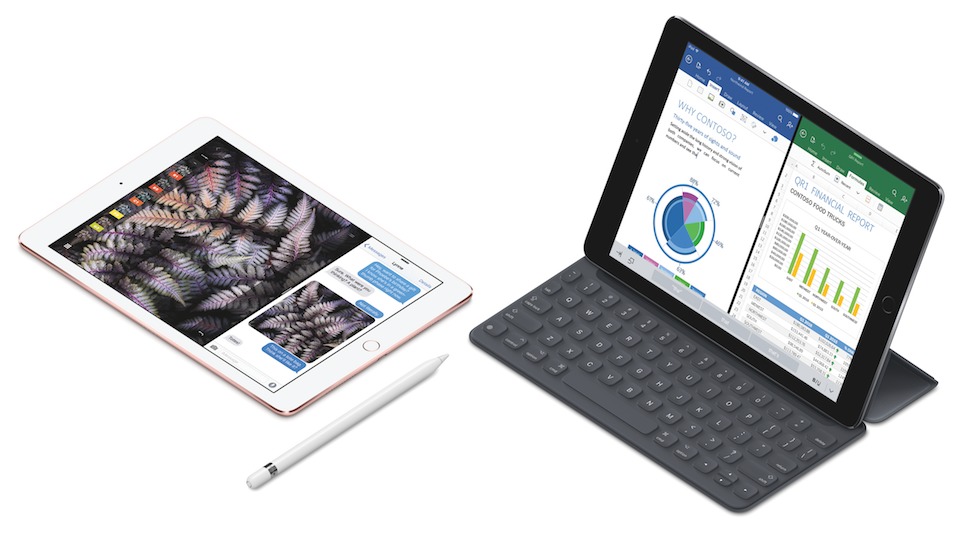 The 9.7-inch iPad Pro features a 2048-by-1536 resolution display at 264 pixels per inch (the same pixel density as the 12.9-inch iPad Pro). However, it features some improvements over the larger iPad Pro: the capability to display a wider color gamut and a new technology Apple is calling a “True Tone display,” which uses ambient light sensors to make onscreen colors match your surroundings. If you’re in warm light, the white balance on the screen will adjust to become warmer, and vice versa.

The smaller iPad Pro also improves upon the original’s camera, with a 12-megapixel rear-facing camera (as opposed to 8 megapixels) with a f/2.2 aperture (compared to f/2.4). Like the iPhone 6s, but not the larger iPad Pro, the 9.7-inch iPad Pro can capture Live Photos and has a dual-LED True Tone flash. It can also take 4K video, while the larger iPad Pro is stuck at 1080p. The front-facing camera has also been improved, with a 5-megapixel sensor and Retina Flash, which uses the screen to simulate a flash. The 12.9-inch iPad Pro has only a 1.2 megapixel front camera, without Retina Flash.

The smaller iPad Pro will of course be compatible with the $99 Apple Pencil, and Apple is offering a matching Smart Keyboard for $149. Official cases will also be available, in polyurethane for $49 or silicone for $69.

New iOS Accessories — Apple also announced a few Lightning accessories aimed at the iPad Pro line, which should be compatible with all Lightning-equipped iOS devices.

The most exciting accessory is the $39 Lightning to USB 3 Camera Adapter, which adds a standard USB port to your device. While this dongle is ostensibly for syncing cameras to your iPad, Apple confirmed that it can also be used to connect USB peripherals like Ethernet adapters, audio interfaces, card readers, and USB microphones. Unlike the existing Lighting to USB Camera Adapter, the new one features a Lightning passthrough so you can charge your device while an accessory is connected. Seems like a big win to us.

Also available is a new Lightning to USB-C cable, which retails for $35. Now you can connect your iOS devices directly to a 12-inch MacBook, or use the MacBook’s 29-watt USB-C Power Adapter to speed up charging of the 12.9-inch iPad Pro.

One Size Doesn’t Fit All — While it’s easy to see the iPhone SE and 9.7-inch iPad Pro as minor releases that don’t advance the state of the iOS device world, that’s missing the point. While many people love the larger screens of the iPhone 6 and 6 Plus form factors, many others have been unhappy with the overall physical size of those devices, and didn’t want to put up with an underpowered iPhone 5s just to have a smaller iPhone. The iPhone SE is Apple listening to its customers. The same is true for the 9.7-inch iPad Pro, which builds in most of the features of the 12.9-inch iPad Pro without forcing people to interact with a device they felt was too large.

No one is suggesting that Apple should turn scattershot and start releasing new form factors willy-nilly, but it’s great to see the company acknowledging that people — and their needs — come in many different sizes.

Comments About Apple Shrinks iPhone and iPad for Latest Releases