Wi-Fi calling lets you make clear phone calls in a poor service area, as long as you have a reliable Wi-Fi connection. The service was first introduced in iOS 8 for T-Mobile, became available to Sprint users later in iOS 8’s lifetime, and made its way to AT&T with the release of iOS 9. Just as Verizon finally added Wi-Fi calling support, including free calls to the U.S. when traveling abroad, in iOS 9.3 (see “iOS 9.3 Works the Night Shift, Protects Notes, and More,” 21 March 2016), AT&T has kept pace with its major competitor, expanding its Wi-Fi calling service to the rest of the world. 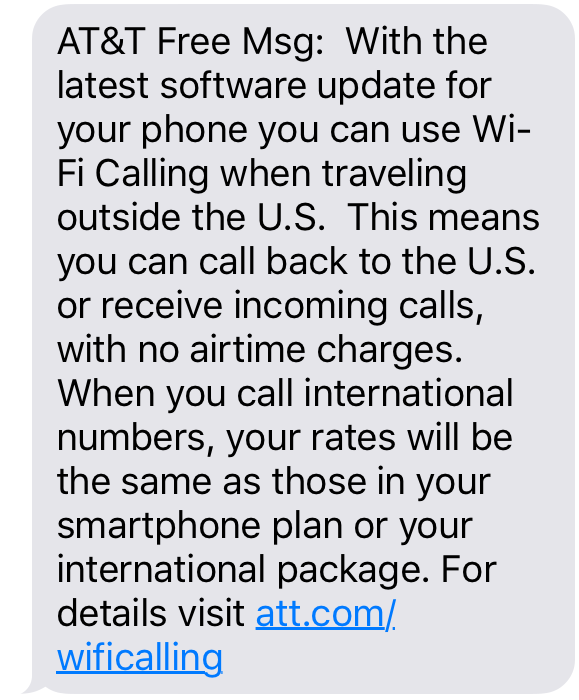 This means that if you’re an AT&T customer traveling abroad with an iPhone 6 or later running iOS 9.3, you can make calls to or receive calls from the United States over Wi-Fi for free. Calls to numbers outside the United States are still subject to the same rates dictated by your plan.

If you haven’t already done so, here’s how to turn on Wi-Fi calling, which is now supported by numerous carriers in the United States. Go to Settings > Phone > Wi-Fi Calling and enable Wi-Fi Calling on This iPhone. You’ll need to enter your home address for 911 emergency calling purposes (for more details, see “Turn on Wi-Fi Calling in iOS 9,” 28 October 2015). Apple provides more information about Wi-Fi calling as well.

After enabling Wi-Fi calling, the carrier name at the left of the status bar will probably look different when you have a Wi-Fi connection. On an AT&T iPhone 6, it displays AT&T Wi-Fi instead of AT&T LTE. From then on, when you make or receive calls while connected to a Wi-Fi network, they’ll be routed over the Internet instead of the cellular network.

Wi-Fi calling is a life-changing feature if the cellular reception in your home or office is poor, and if you’re an AT&T customer who travels abroad, it could save you a fortune in roaming charges as well.