Today marks Apple’s fortieth year in business since being founded by Steve Jobs, Steve Wozniak, and Ronald Wayne on 1 April 1976. Back in 1996, Apple’s executive team came up with the idea of commemorating the company’s twentieth anniversary with a limited edition Mac, and tapped Jonathan Ive to design it as one of his earlier projects at Apple. The result, the Twentieth Anniversary Macintosh, was announced in January 1997, hitting the twentieth anniversary of the company’s official incorporation (see “The 20th Anniversary Mac Comes for Tea,” 7 July 1997). 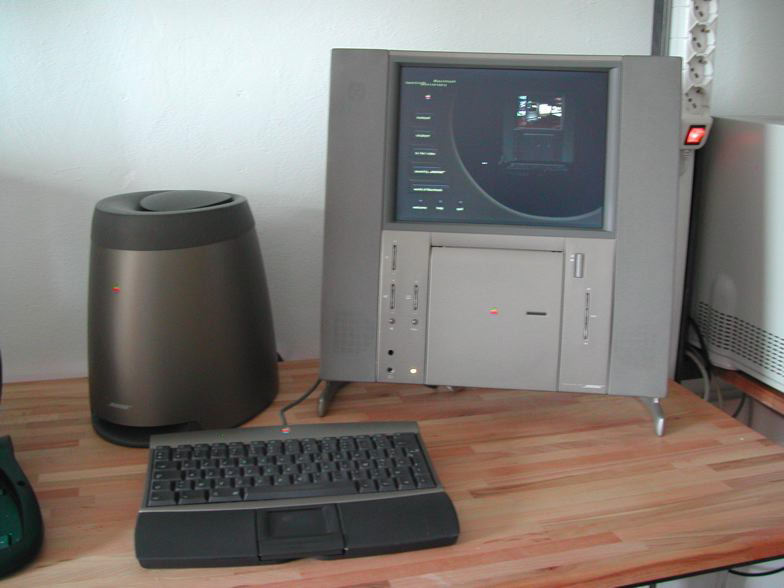 History is repeating itself, with Apple once again wanting to celebrate a major decade anniversary with a limited-edition piece of hardware that sources tell us will be called the Fortieth Anniversary Mac. Like its predecessor, the Fortieth Anniversary Mac is intended to be a technological showcase, with numerous features that demonstrate where Apple believes computing is going. It will once again be designed by Jonathan Ive, now Chief Design Officer at Apple, and if past performance is any
indication, we can expect a release in January 2017.

The Twentieth Anniversary Mac foreshadowed today’s iMac with its all-in-one design based around a 12.1-inch LCD screen, and the Fortieth Anniversary Mac is expected to continue that design direction, focusing everything on the screen. The final size hasn’t yet been determined, but it will likely be a 17-inch Retina display. That sounds small, given the 27-inch size of Apple’s top-of-the-line Retina iMac, but if you think of it instead as an enormous iPad, you’ll understand Apple’s thinking.

That’s right. Despite its name, the Fortieth Anniversary Mac will mark the long-expected merger of OS X and iOS, with support for both Mac- and iOS-style interactions, taking advantage of the best of each environment simultaneously — it’s not an either/or situation. The screen, which is the entire computer, can be removed from its stand to function physically much like an iPad — it might be a bit large, but Apple expects third-party accessory manufacturers to develop stands that position the screen like a small drafting table. Both table-top and floor stands are in the works.

Touch-based interaction will always be available, and like the iPad, the Fortieth Anniversary Mac will accept input from Bluetooth keyboards. But it will also support mice and trackpads, displaying the traditional mouse pointer whenever one is detected and providing fluid control of OS X apps. In iOS apps, keyboard interaction will work just as the Smart Keyboard does on the iPad Pro today, taking over for the onscreen keyboard as appropriate.

While some will see the melding of the mouse and keyboard with touch-based interactions as an unholy chimera of interface design, changes to OS X’s bundled apps over the past few releases mean that Messages and Calendar, for instance, already look and work basically the same on the two platforms. And with features like OS X’s Launchpad bringing even basic iOS and Mac interaction closer together, many users probably won’t find the merger awkward. Also keep in mind that, with a January 2017 release date, there will be time for Apple to further tweak multitasking features in OS X 10.12 (currently codenamed “Tiburon”) and iOS 10, so when they come together on the Fortieth Anniversary Mac, it shouldn’t seem too strange.

That said, Fortieth Anniversary Mac users will have to make some accommodations to use Mac apps. Only apps sold through the Mac App Store will be able to run on the Fortieth Anniversary Mac, which enables Apple to require certain features, such as the necessary support for Split View when a Mac and an iOS app need to share the screen, and to ensure that the apps avoid private frameworks that aren’t compatible with the A10X processor that’s slated to succeed the A9X used in today’s iPad Pro. While the 12.9-inch iPad Pro has 4 GB of RAM, the Fortieth Anniversary Mac will sport 8 GB of DDR4.1 RAM, putting it on par with most entry-level Macs.

Two features from the iPad world will make their way to the Fortieth Anniversary Mac as well. The standard Home button with Touch ID is present, and all Mac apps will accept Touch ID in lieu of passwords. And, like recent iPhones, you’ll be able to issue commands to Siri without pressing a button. A new TalkKit API will allow both Mac and iOS apps to register their own commands and reactions with Siri, although Apple will be paying close attention to those during app review in order to prevent Siri from acting in ways Apple deems unseemly.

In terms of other specs, the Fortieth Anniversary Mac relies largely on wireless networking, with 802.11ad Wi-Fi and Bluetooth 4.1. Like an iPad Pro, it has only two physical communications ports, a standard Lightning port for charging and communications and an updated magnetic Smart Connector port that provides power and communications when docked with the screen stand. The stand itself offers four USB-C ports that support Thunderbolt 3 and can be used with a variety of adapters for legacy peripherals. Four corner-mounted speakers and a microphone are standard, as are the same front (5
megapixel FaceTime HD) and rear (12 megapixel iSight) cameras as in the 9.7-inch iPad Pro.

Over time, if the Fortieth Anniversary Mac proves a success, the distinction between OS X and iOS apps will start to fall away, with apps using the interface elements that are most appropriate for their functions, rather than being limited by platform capabilities. So, for instance, a powerful word processor could have all the keyboard and mouse pointer interactions Mac users are accustomed to while writing and formatting, while still allowing Apple Pencil–based selection and commands when marking up a document in editing.

As with any limited edition product, determining the Fortieth Anniversary Mac’s success may not be easy. The price isn’t yet set, but will undoubtedly be higher than the specs would seem to warrant, and Apple hasn’t yet decided how many to make. Also unknown is whether Apple will sell the Fortieth Anniversary Mac in all four standard colors — silver, gold, space gray, and rose gold — or stick with the rose gold of the prototype, reportedly Ive’s favorite color.