Apple’s 12-inch MacBook with Retina display is a fantastic mobile computer for the right kind of owner, but it does have limitations.

Its compactness is a plus for those on the go but becomes a liability for users in a home or office where more screen real estate will increase productivity (see “The 12-inch MacBook: A Different Mac for a Particular User,” 29 April 2015).

In particular, the MacBook’s single USB-C port can be annoying for those wanting to attach peripherals while still being able to charge the laptop (see “MacBook Accessories Reduce Single USB-C Port Inconvenience,” 10 March 2016).

Both of these problems can be addressed in one fell swoop, if not perfectly, with a new product that is tailor-made for the MacBook. 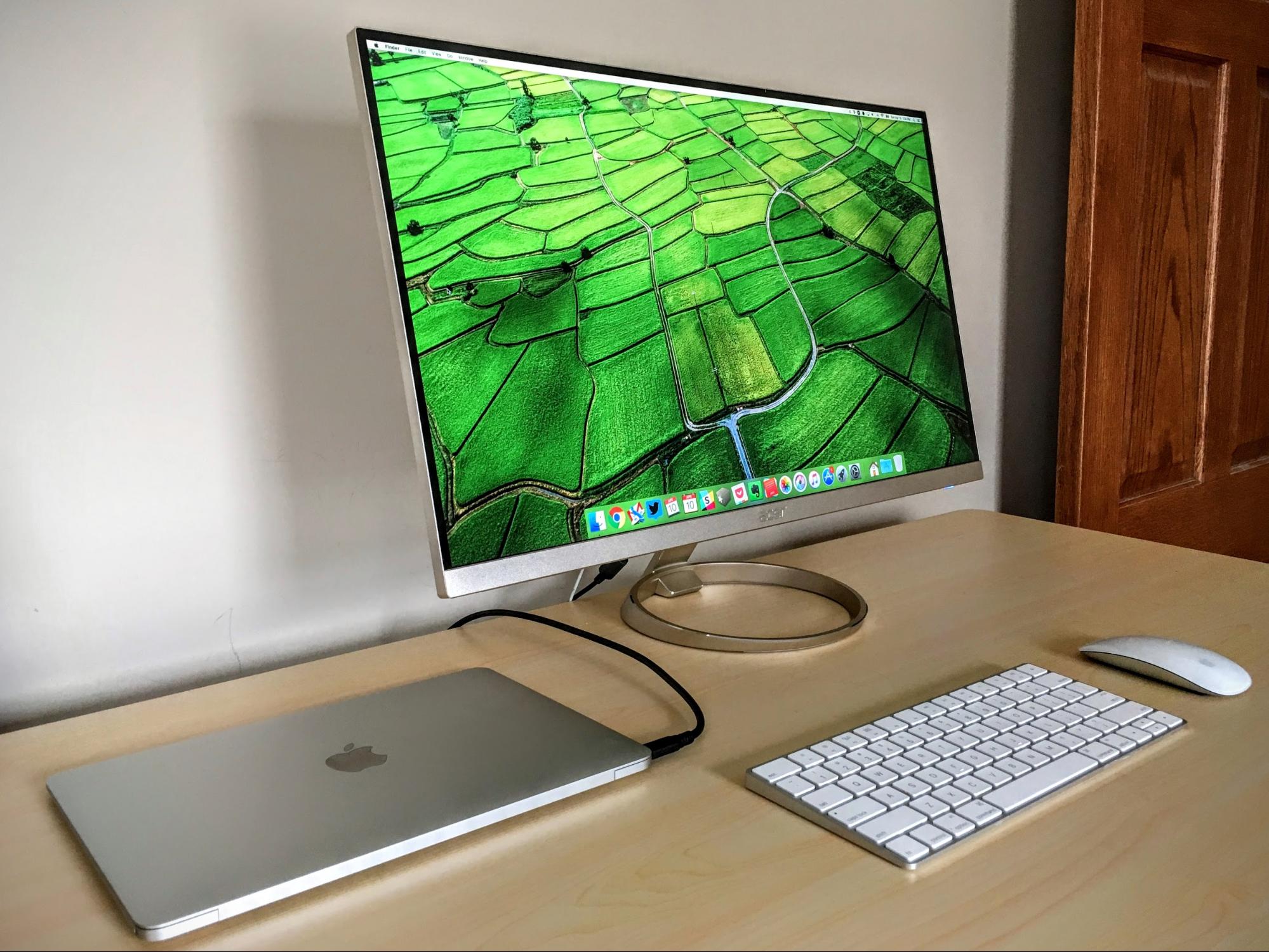 Key for MacBook owners is the H277HU’s USB-C port, meaning that you can plug the laptop into the monitor directly in a pleasingly minimalist fashion, instead of via clunky adapters. 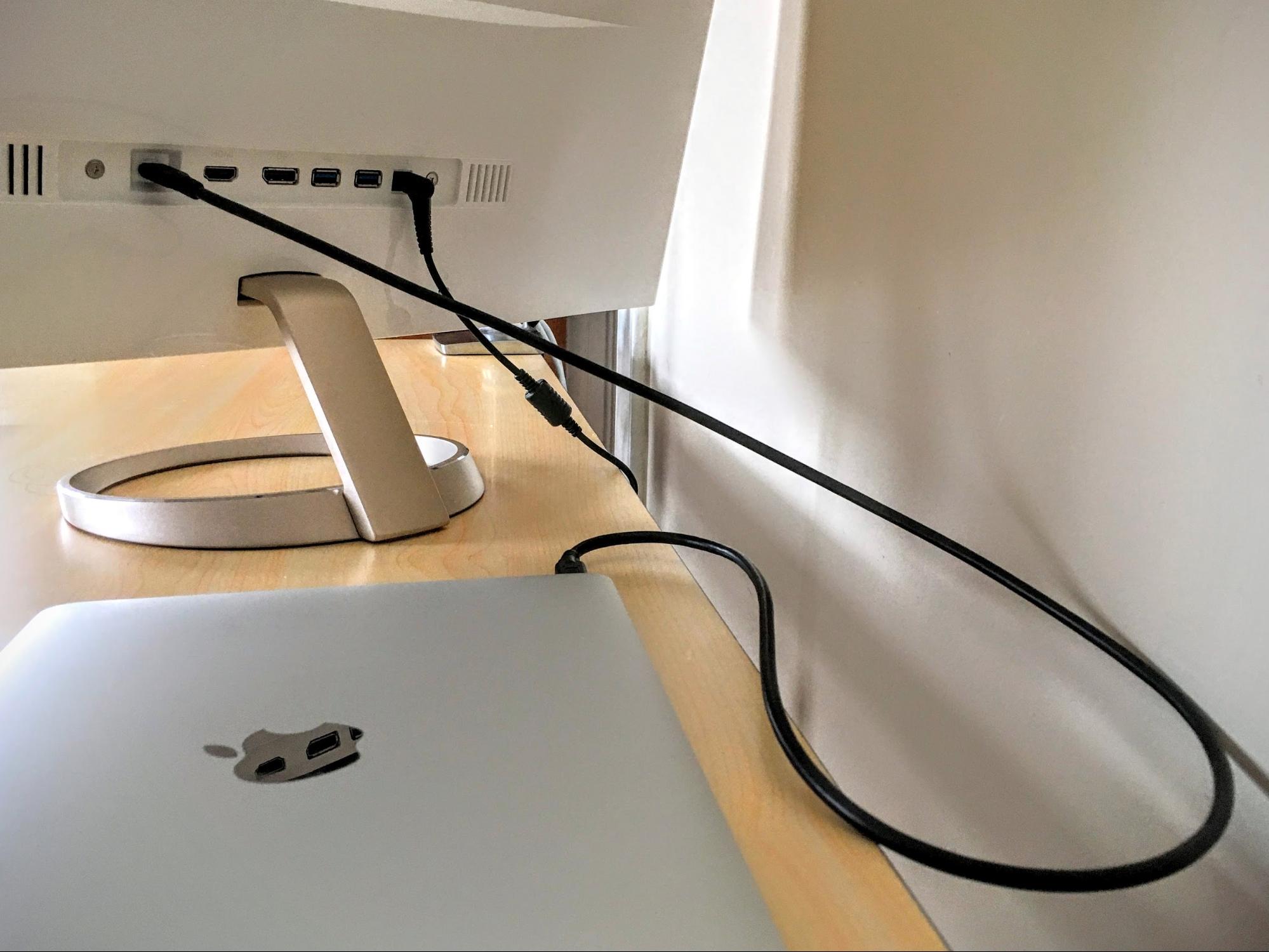 Once connected, the MacBook gets power via the display’s AC adapter. The screen also acts as a USB hub, providing a couple of USB 3.0 ports with USB-A connectors on the back.

Most important, MacBook users score a gloriously ample working area that can be used as an extension of the laptop’s screen. It can also mirror the MacBook’s screen, but the two are such different sizes that it’s not a big win.

I prefer the third option: shutting the MacBook and using just the display, which offers more than enough space for side-by-side working windows or the use of interface-heavy apps like Final Cut Pro. TweetDeck, a multi-column Twitter client that works best on larger screens, is great on this display, with room for up to nine columns. 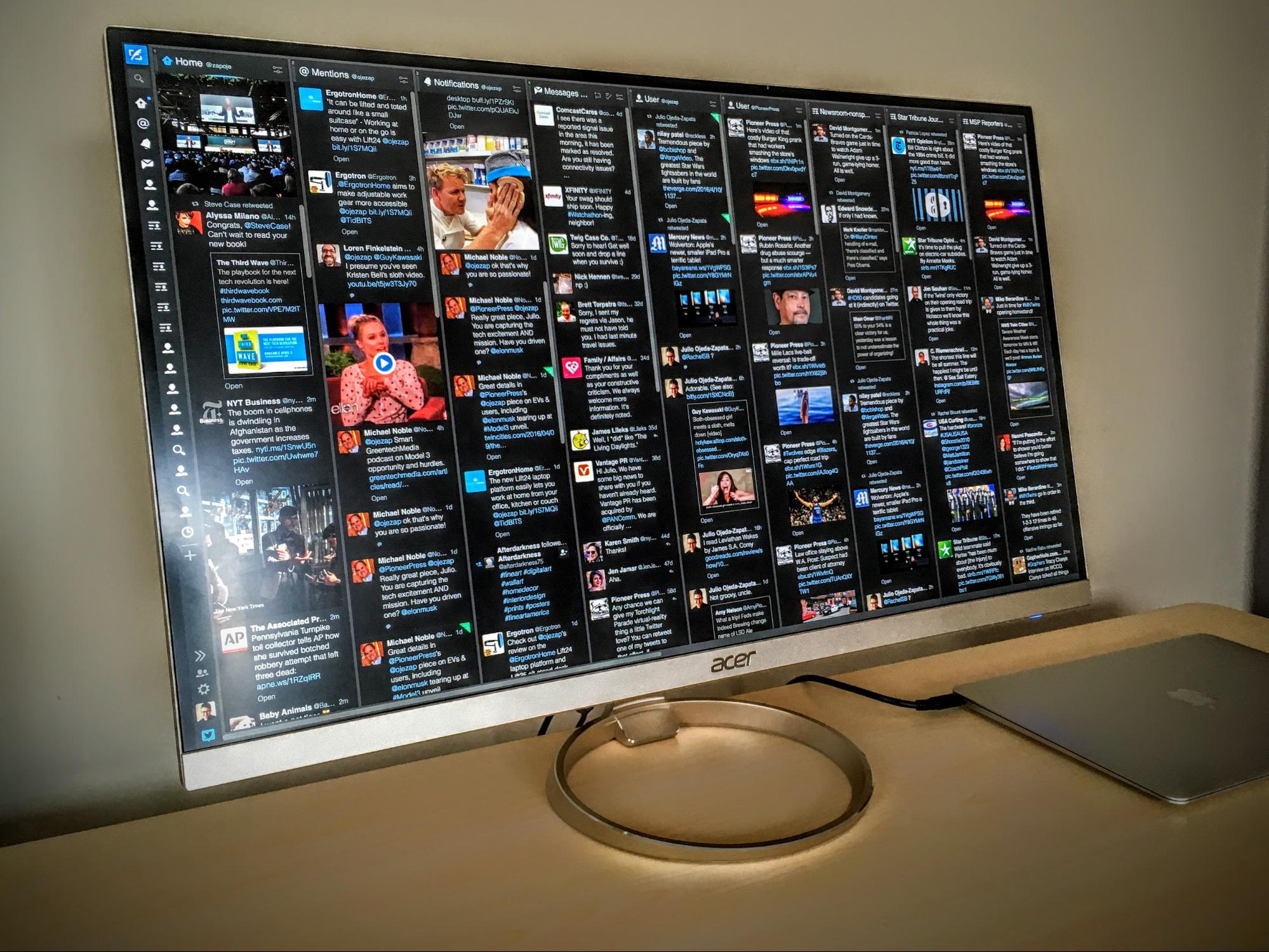 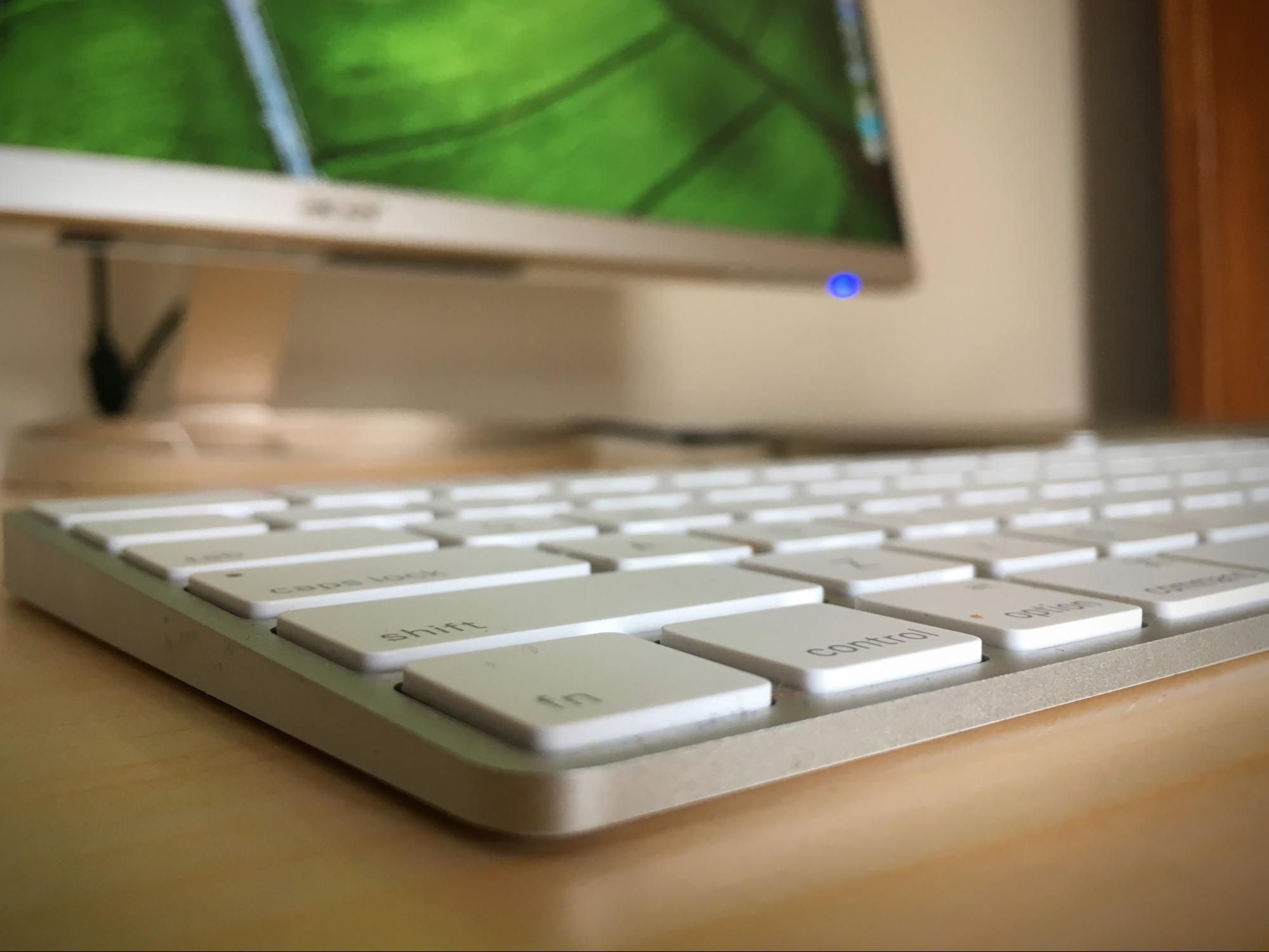 The H277HU’s sub-Retina design could be a deal-breaker for some. Indeed, after heavy use of Retina-grade Macs and iOS devices, my eyes rebelled a bit with this monitor, but I got used to it quickly.

The $499.99 price is right, too. This means, for those who have already invested in a premium-priced MacBook, that an external display can be added to the mix at a reasonable cost.

The H277HU’s image quality won’t win any awards. The screen isn’t super bright and lacks vibrancy. Colors seem accurate apart from whites that are subtly tan. Not being a graphics guy, I didn’t mind this and have happily used the display as my main work screen for weeks with no eyestrain or other issues.

It offers a suite of fairly sophisticated color controls for those with high sensitivity. But some of these — like “blue light,” “warmth,” and “super sharpness” — just seemed to make things worse. 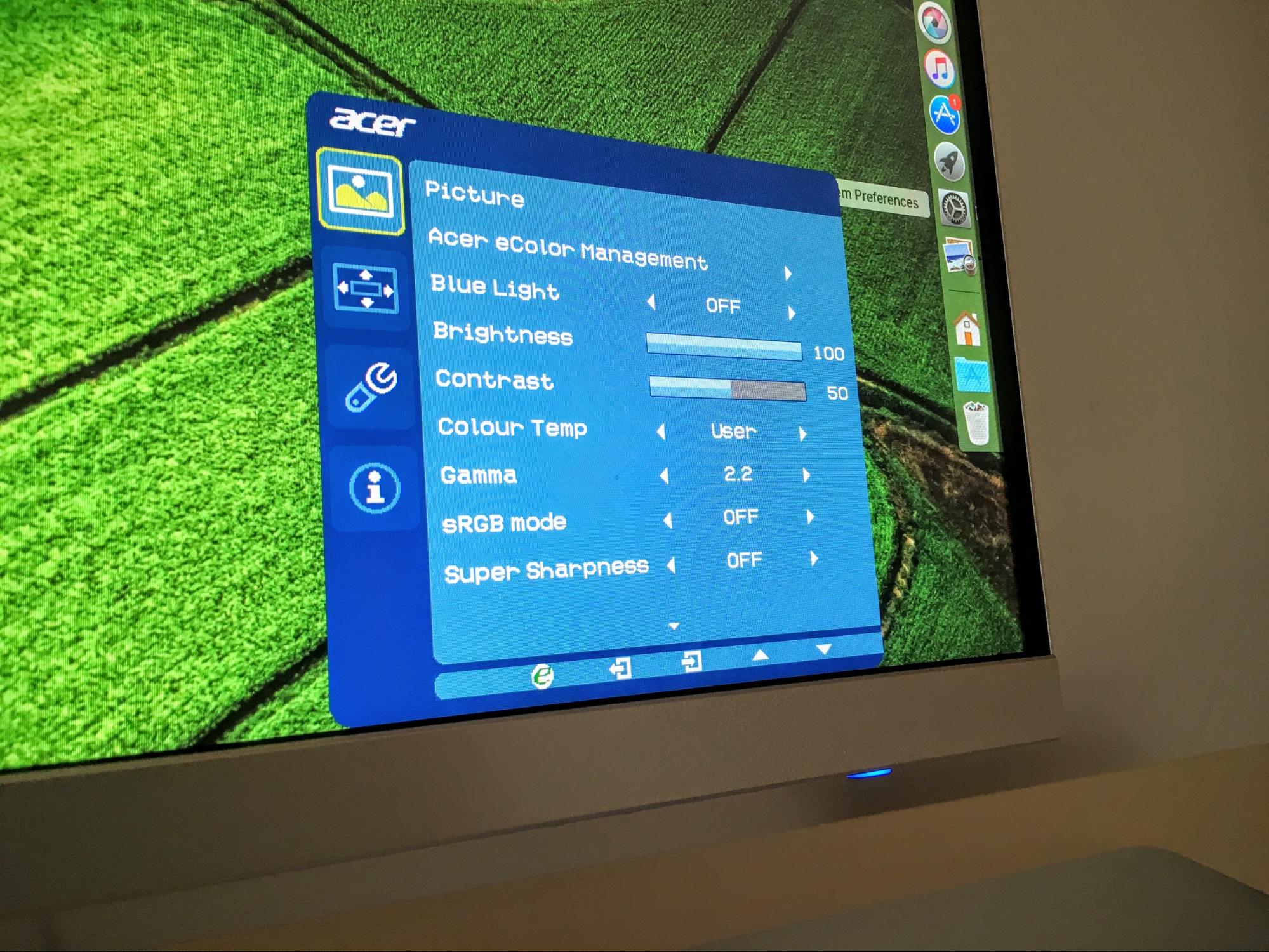 Overall, Acer’s display largely works as advertised. Connecting it to the MacBook via the sole USB-C port in the back was plug-and-play — most of the time. A couple of times, the MacBook desktop wouldn’t come up on the large screen until I futzed a bit. The USB-C cord bundled with the display seemed to work best, even though any USB-C cable should be fine in theory.

For those listening to music, the H277HU has built-in speakers, but they aren’t very powerful and can’t be controlled using the Mac’s on-screen audio controls or with the Magic Keyboard’s audio buttons. The speakers are on the back, which is necessary for achieving those razor-thin bezels, but that makes the sound muddier than with front-facing speakers. There is no audio jack for connecting external speakers. I stuck with the MacBook’s internal speakers most of the time. Bluetooth speakers are another option, or you can plug speakers into the laptop’s own audio port.

In terms of ergonomic options, the monitor can tilt forward or backward up to 15 degrees, but it can neither swivel nor be raised or lowered. It’s quite stable on its base, swaying a bit only if jostled.

Don’t assume this display is only for USB-C users. It also provides full-sized DisplayPort and HDMI ports on the back, and I had no troubles connecting a 13-inch MacBook Pro via HDMI.

The H277HU is one of the first in a new wave of USB-C monitors, as I observed in “MacBook Accessories Reduce Single USB-C Port Inconvenience.”

But, after using it, I’m not scanning the horizon for better prospects. Although the display isn’t perfect, it’s capable and affordable, and would be a terrific sidekick for any MacBook owner seeking an external screen.