These days, when someone calls me on the phone when I’m at my desk, chances are I’ll take the call on my speakerphone, which happens to have a 27-inch Retina display and stereo speakers: in other words, my iMac. If you have a Mac running OS X 10.10 Yosemite or later, and an iPhone running iOS 8 or later, you can set them up to do the same as long as both devices are on the same Wi-Fi network.

The first thing you need to do is to make sure your iPhone and your Mac are both signed into iCloud with the same Apple ID. On your Mac, you do this in System Preferences > iCloud; on your iPhone, you do it in Settings > iCloud.

Next, on your iPhone, go to Settings > Phone > Calls on Other Devices and turn that switch on. Then turn on the switch for your Mac, which appears on the same Settings screen; if you have other devices that also use the same Apple ID for iCloud, and you want to make calls with them, you can enable those devices as well. 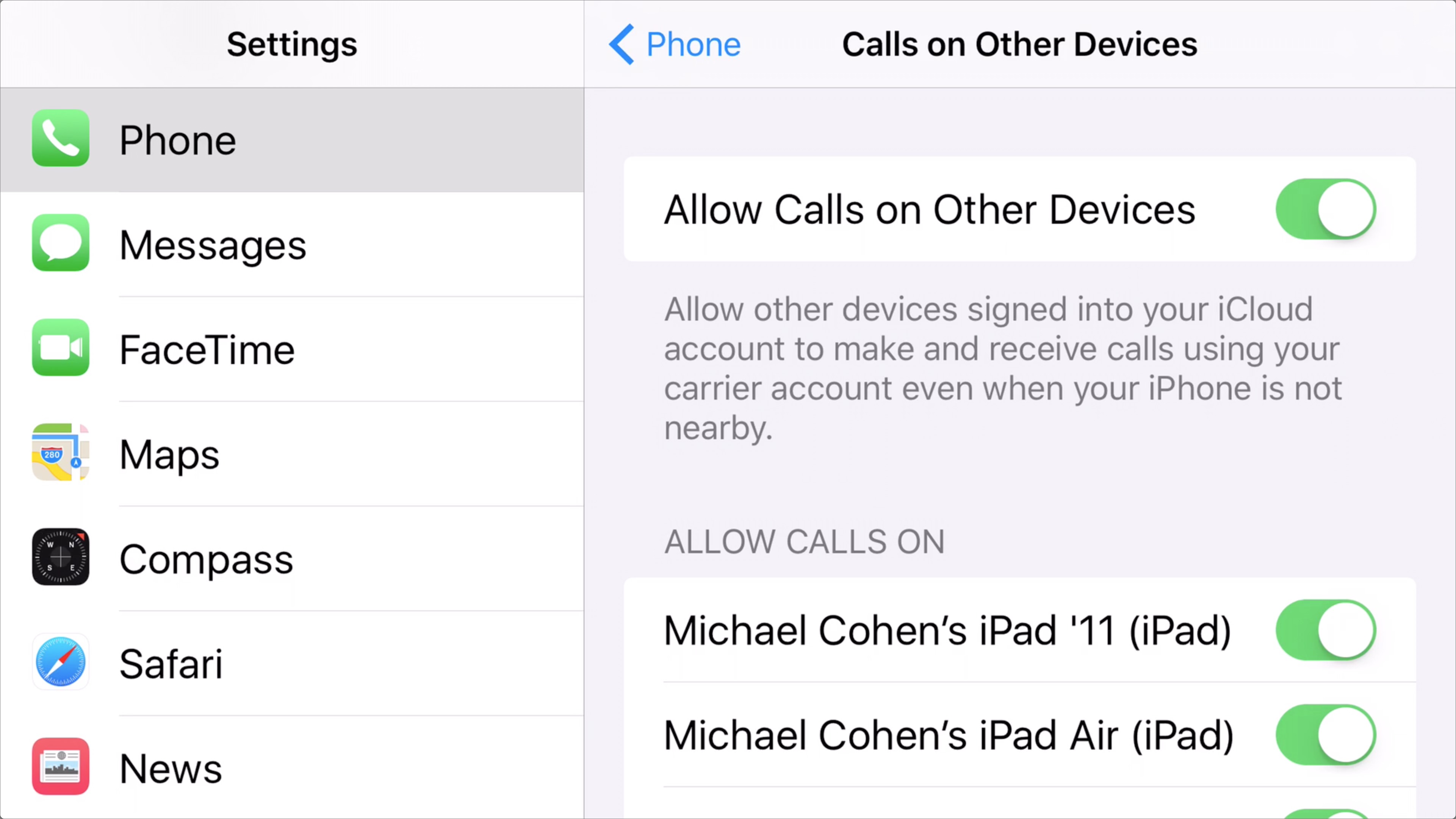 With that out of the way, it’s time to make your Mac phone-friendly, and the key to that is FaceTime. Open the FaceTime app in the Applications folder and go to FaceTime > Preferences (Command-,) and enable Calls from iPhone. You may be asked to verify an emergency address for things like 911 calls; if so, go ahead.

If all goes well, that’s it. Your Mac and your iPhone are now buddies as long as both are on the same Wi-Fi network: any calls to your iPhone’s number will also ring on your Mac — as well as on any other devices you have enabled to receive calls from your iPhone. In my case, any call to my iPhone also rings on my Mac, two iPads, and my Apple Watch, so I have a wide choice of answering options! When a call comes into my iPhone, a notification appears on my Mac from which I can answer the call, decline it, or send it to voicemail using the pop-up menu attached to the notification’s Decline button.

Note, though, for the Mac to receive calls, your iPhone has to be on (it can be sleeping) and within Bluetooth range of your Mac; that is, unless you have also enabled Wi-Fi Calling on your iPhone (Settings > Phone) and in FaceTime on your Mac (FaceTime > Preferences). Wi-Fi Calling works on any 2012 or later Mac running OS X 10.11 El Capitan, with the exception of the mid-2012 “cheese grater” Mac Pro, and an iPhone running iOS 9. In the United States, Wi-Fi Calling now
works with all four major carriers: AT&T, Sprint, T-Mobile, and Verizon. For more on Wi-Fi Calling, see “Turn on Wi-Fi Calling in iOS 9” (28 October 2015).

So much for receiving calls. To make a call from your Mac, you have several options. One of the easiest is to use the Contacts app: go to the contact you want to call and then hover your pointer over the phone number. A blue phone icon appears to the right of the number. Click the icon and your Mac calls that number.

If you see a phone number in an email message in Mail, a Web page in Safari, or a note in Notes, you can also use that number to make a call. Hover your pointer over the number, click to see the pop-up menu, and then choose the Call item.

FaceTime shows a notification as it attempts to make the call. Once the call connects, you can mute the call or end it from the notification, which stays on the screen as long as the call is in progress.

And what if the number you call is an automated phone system that requires you to enter numbers (“Press ‘1’ for more…”)? Not a problem: make sure the FaceTime notification is selected and then enter numbers using the number keys on your Mac’s keyboard.

So the next time you’re working at your Mac and your iPhone rings in your pocket, don’t fumble around for it: take the call on the big screen.

Comments About Phoning It in on Your Mac