As the resident bad cartoonist at TidBITS (see “iPad Tools for Bad Cartoonists (and Good Ones, Too),” 29 November 2012), I am occasionally called upon to look at professional quality drawing tools to see if they have anything to offer people like me who lack artistic talent and skills but still enjoy sketching and drawing. That’s why recently, having dipped into my savings to purchase a 9.7-inch iPad Pro and Apple Pencil, I found myself looking to see if any new apps on the market could take advantage of that powerful duo. What I found was an inexpensive ($5.99) app from Savage Interactive
with the suggestively imperative name Procreate.

Unlike some graphics apps in my iPad artist’s arsenal that attempt to provide the wide range of features that Photoshop refugees desire, Procreate is sharply focused on the act of drawing. You won’t find much in the way of features like gradient fills, warp tools, layer styles, or shape palettes in the spare, get-out-of-my-way Procreate interface. Instead, you will find a gesture-driven app replete with enough drawing tools to create anything from a rough pencil sketch to a richly textured painting. Procreate’s tools are confined to a thin toolbar at the top of the screen and a set of sliders that control brush size and opacity at the screen’s side (you can choose which side). But if even that minimal user interface takes up too
much room for you, a quick four-finger tap on the screen banishes them from view until the next four-finger tap brings them back. 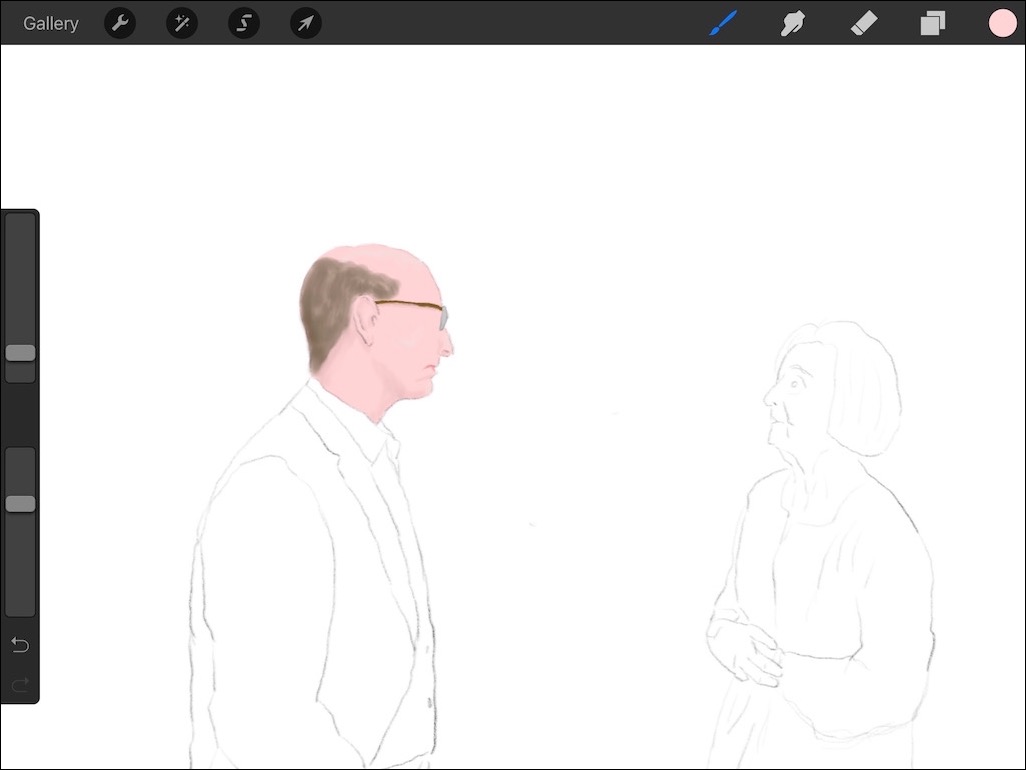 Procreate is all about brushes. You draw with brushes, you erase with brushes, you smear and smudge colors with brushes. The range of brushes that come with the app is broad and deep, with as many customization controls as a professional artist, let alone an amateur dauber, could desire. For each brush offered by Procreate, you can access settings to customize brush stroke, shape, grain, dynamics, and more. 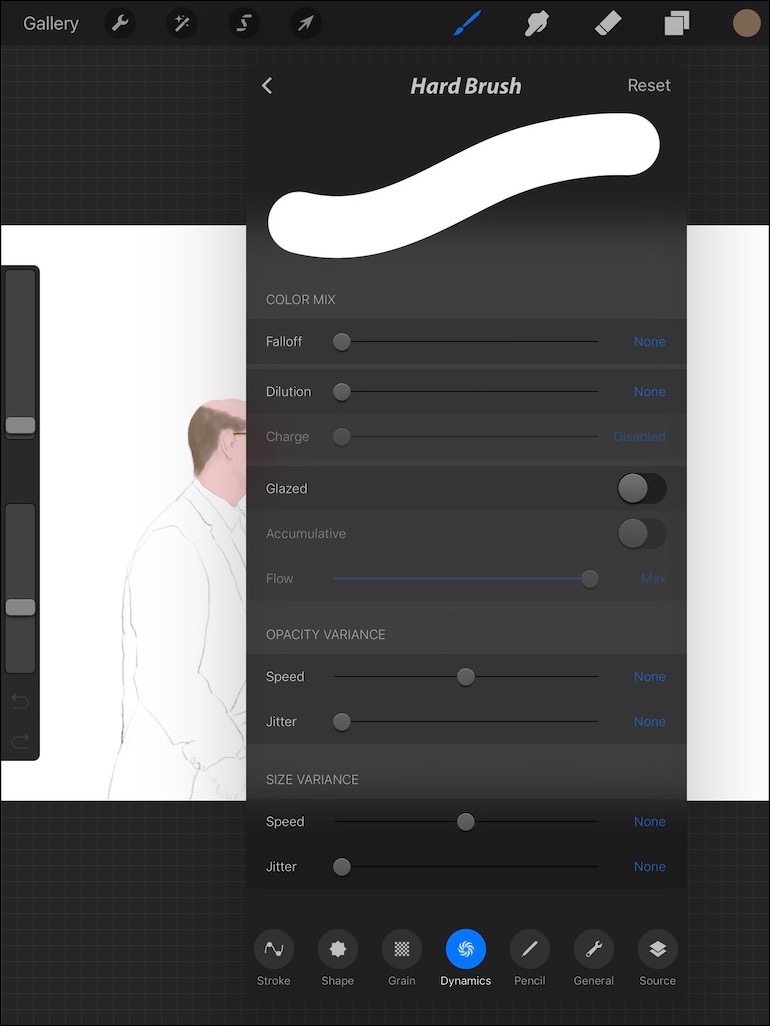 The app provides 16 sets of brushes, with each set containing 8 brushes. The sets themselves include simple sketching tools that emulate various kinds of pencils, traditional paint brushes of different shapes and textures, luminance brushes that paint glowing and glittering swashes, and even industrial brushes that can lay down the texture of corrugated iron and concrete blocks. But if that isn’t enough, you can construct your own brushes to add to the existing sets or to a new set. And if that isn’t
enough, you can import brushes made by other Procreate users; brush files can be imported and exported with ease.

But what’s it like to draw with the app? Surprisingly easy and natural feeling. Just pick a brush and draw. Procreate is fast and responsive — especially on an iPad Pro with an Apple Pencil, though I found even my first-generation iPad Air performed gracefully with no discernible lag when I drew with my fingertip. The app works out of the (virtual) box with the Apple Pencil, but it also supports the Adonit Jot, the Pencil by 53, the Pogo Connect, and the Wacom Intuos Creative Stylus — and, of course, your finger.

By default, Procreate provides several levels of palm support so you can rest your hand on the screen while drawing without inadvertently leaving a mark. Furthermore, it provides Apple Pencil settings you can adjust to have the app ignore your finger and only draw, erase, or smudge when you use the Pencil. Similarly, you can limit finger touches to gestures or specific tools, making it even less likely that an idle finger tap will mess up your drawing.

As a bad cartoonist, I rely very much upon layers so that I can, say, put a photo on one layer as a model or a tracing guide, use another layer for making a rough sketch, and use other layers for paint and shading as needed. Procreate has layers to spare. The number of layers offered depends on the size of the canvas you create. A canvas sized to match the pixel dimensions of a 9.7-inch iPad Pro display offers 60 layers, and even a canvas with dimensions of 2480-by-3508 pixels, enough to fill an A4 sheet of paper, provides 19 layers. That’s more than sufficient for me; my typical bad cartoons seldom exceed half a dozen layers. 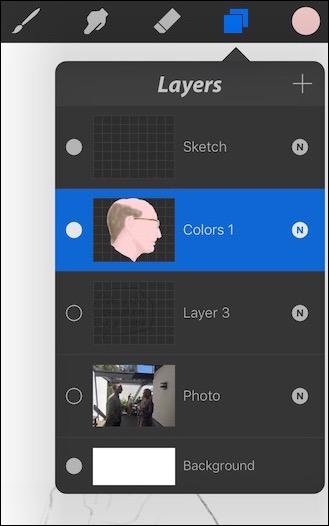 As with drawing, the layer interface in Procreate is gestural, controlled by various combinations of single- and multi-finger taps and swipes. For example:

Procreate offers a number of adjustments that act upon the current layer as well. In addition to layer opacity, you can apply Gaussian blurs, motion blurs, perspective blurs, sharpening, and noise with the Adjustment palette. To apply an adjustment, tap the one you want and then drag across the canvas. You can also adjust hue, saturation, and brightness, as well as color balance, and you can define a color curve for a layer or even recolor a particular color on that layer. 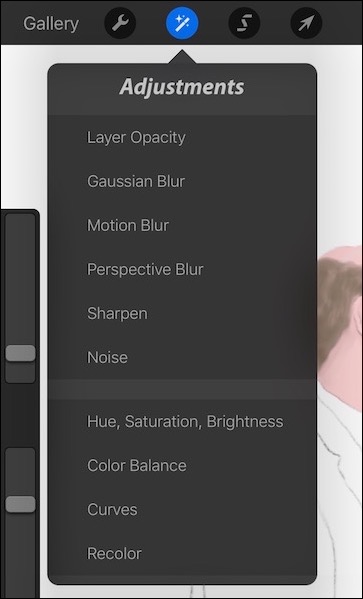 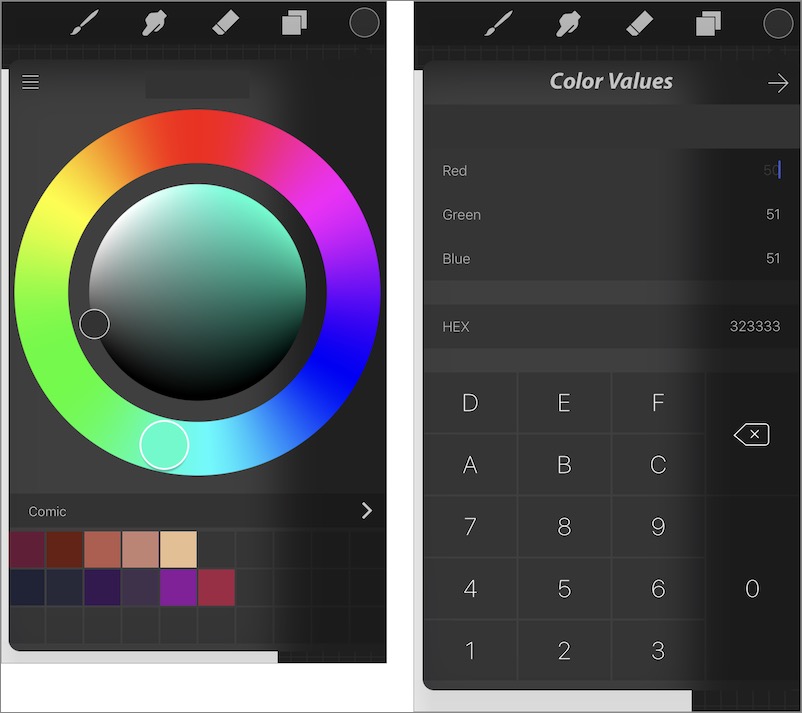 What about masks? Instead of offering the mask layers found in other apps, any selection you make in Procreate operates as a mask. Make a selection, tap the brush, smudge, or erase tool, and the current layer is masked to your selection. Or you can select the contents of one layer and switch to another layer, and the selected area follows along so that you can mask one layer to any shape painted on another layer. The mask indicator is a subtly animated, lightly drawn diagonal hatching that indicates where you can and cannot
draw. 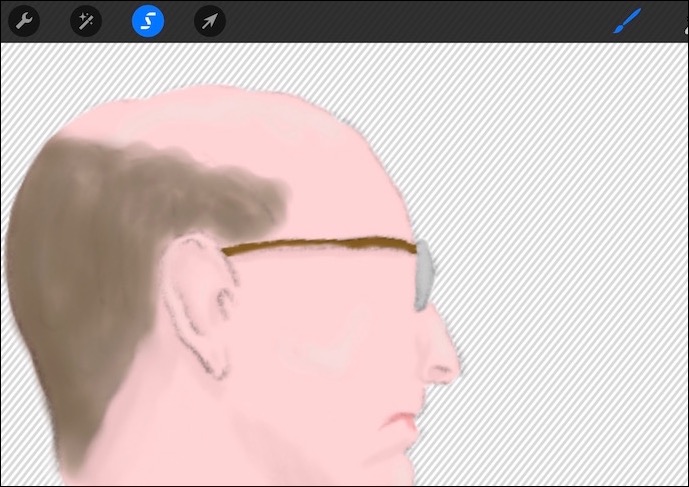 The only tool missing from Procreate that I need for my humble creations is a text tool for captions. But even that is not much of an obstacle with iOS 9’s Split View feature. Using it, I can have both Procreate and Pixelmator on the screen at the same time. I simply craft my cartoon caption in Pixelmator and then copy and paste it into Procreate — the copied text appears on its own layer, retaining typeface and style, but becomes text-shaped
paint that you can move, transform, paint over, and modify like any other paint on a Procreate layer. 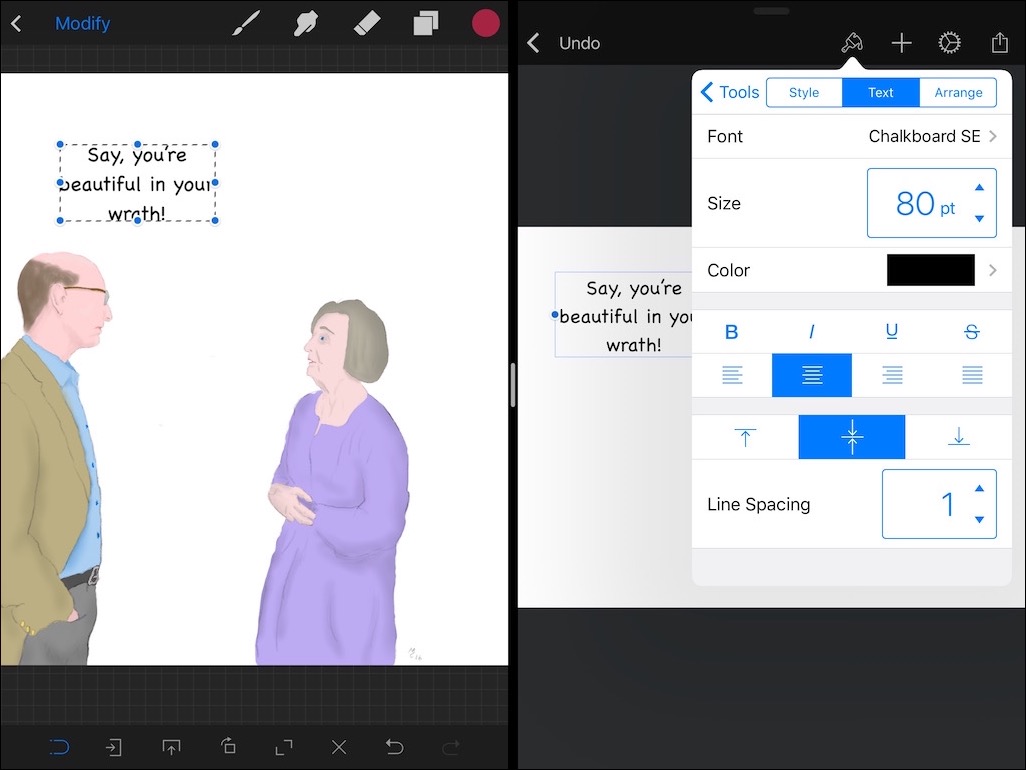 Savage Interactive doesn’t provide much in the way of built-in help for Procreate. Instead, it has published a free Multi-Touch book, the Procreate Artists’ Handbook, that you can download from the iBooks Store. This book provides just about all the help you need — or, at least, that I needed. If it doesn’t give you what you want, you can also visit the community forums at the company’s
site to find not only discussions about features and techniques, but also helpful tutorials.

For an artist manqué like me, I find these are golden days. Armed with tools like the iPad Pro, the Apple Pencil, and Procreate, I can successfully create artworks that might not shame even a professional cartoonist. Procreate is a tool I am happy to have — literally — at my fingertips. 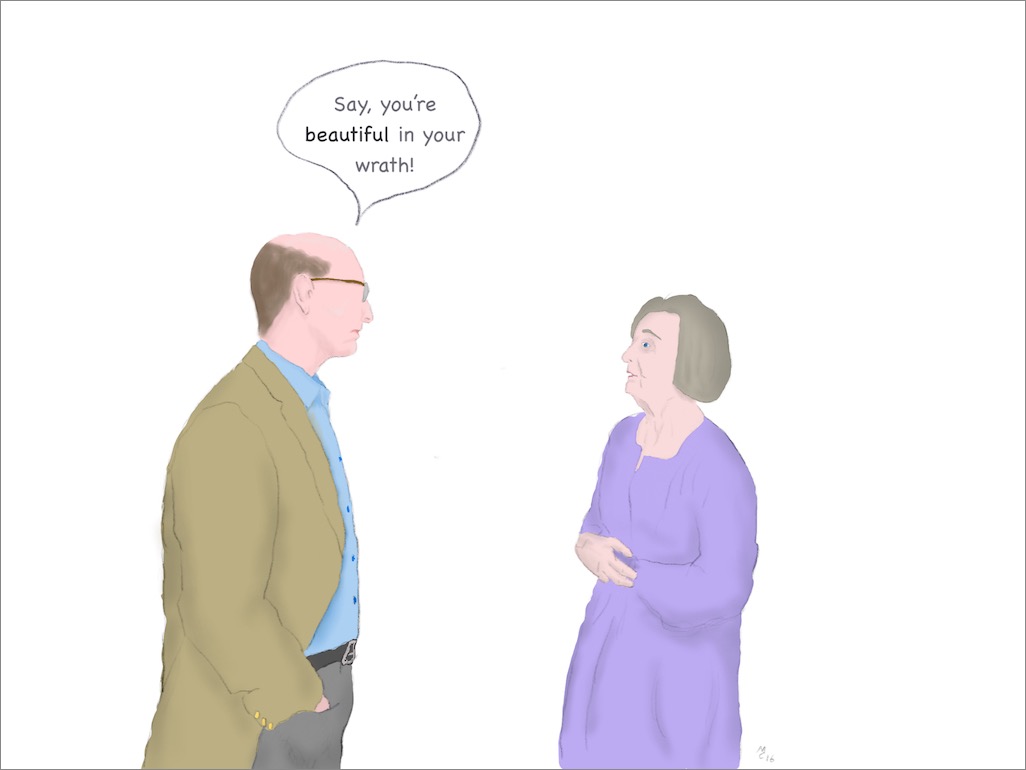 Comments About Procreate for Cartooning on the iPad Pro