Third-party keyboards have been a feature of iOS for a while now (for background and installation instructions, see “iOS 8 Third-Party Keyboards Explained and Reviewed,” 2 October 2014), but none have been great. I try new ones regularly, and even revisit older ones, but they end up being more frustrating than helpful. Every one I’ve tried has been slow, lacked key features, or been just plain weird. I had given up on them entirely, until now.

Meet Gboard, a free new keyboard from Google. What sets Gboard apart is that it integrates Google search right into the keyboard. Let’s say you’re meeting a friend for lunch, and you need to text him the restaurant’s address. Instead of asking Siri for the address, tapping the map for more details, tapping the restaurant label to see more information, tapping and holding on the address until the Copy button appears, tapping Copy, switching back to Messages, and pasting the address, you can just tap the Google button on the keyboard, search for the restaurant, and tap a result card to insert the restaurant’s fully linked address into a
message. Google’s promotional video sums it up well.

Gboard does a lot of neat things, but let’s start with the basics. It bears repeating that Gboard is a highly competent keyboard. The keys are where you expect to find them, and they respond as you’d expect, with a little popover when you press a key. Typing is fast, with no lag. It even features QuickType-like suggestions, just like Apple’s default keyboard. 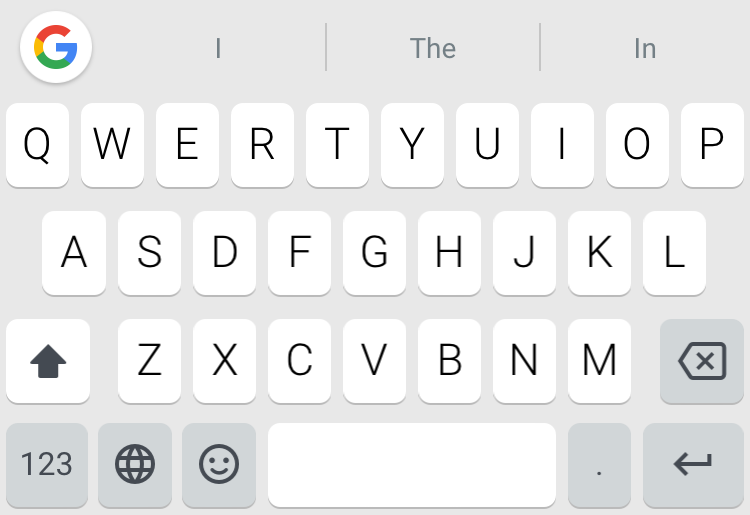 In fact, other than the big Google button, you’d be hard-pressed to differentiate Gboard from Apple’s keyboard at a glance. That said, it does fall short in a few ways. For one, there is no dictation, so if that’s a feature you often use to avoid typing entirely, Gboard may not be for you. It’s a shame, since Google’s voice recognition capabilities are often better than Apple’s, so Google Voice–powered dictation would be welcome.

There’s no trackpad-style text selection on the iPad or iPhone 6s and 6s Plus, which is unfortunate, although we haven’t heard of too many people using it heavily.

Also, Gboard’s typeface is slightly different. It uses Google’s Roboto instead of Apple’s San Francisco. The two are similar, but Google’s implementation of Roboto in Gboard is a bit on the wispy side. As Daring Fireball’s John Gruber pointed out, the period key is difficult to see. From an accessibility standpoint, Gboard has room to improve.

Gboard offers a lot of useful features to make up for its current accessibility deficiencies. For one, its “glide typing” feature lets you swipe over letters to type out words, with the keyboard guessing at what you meant. Many other keyboards offer this feature as well, but Gboard’s implementation seems to be particularly smooth and its guesses accurate — and when it doesn’t know a word and you type it manually, Gboard learns it for future suggestions. Plus, when it guesses wrong at a word, a single tap on the Delete key is sufficient to remove the entire word; you don’t have to backspace over every character.

It also has a built-in emoji keyboard, so you don’t have to switch back to Apple’s keyboard to enter emoji. Gboard also suggests emoji as you type. For instance, if I type “lol” or “dinner,” it suggests a relevant emoji. Plus, once you switch to Gboard’s emoji keyboard, you can search for emoji to avoid swiping through hundreds of tiny icons. 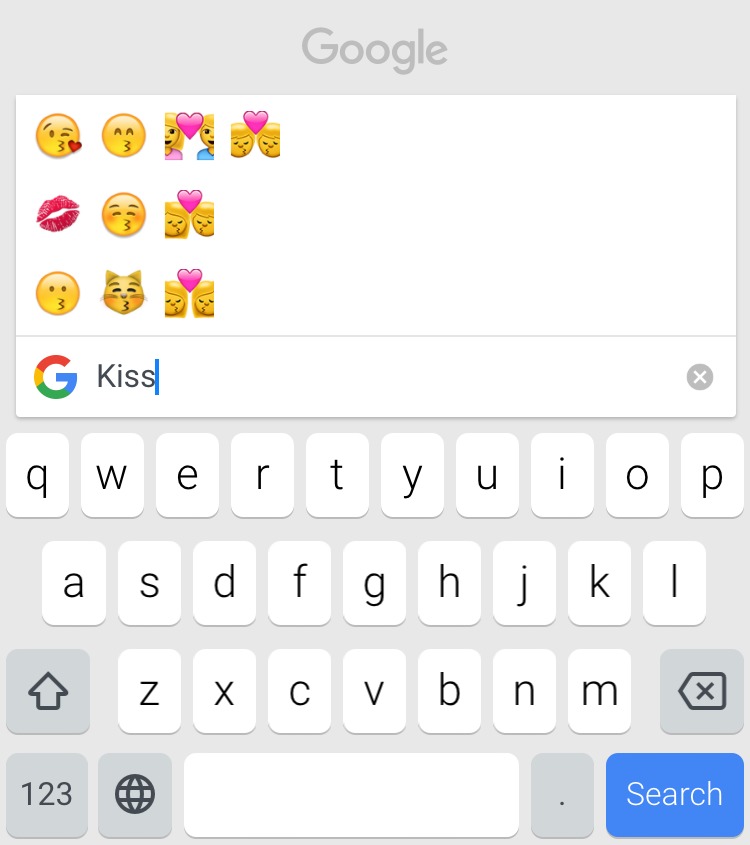 Tapping a GIF button at the bottom of the emoji keyboard also lets you insert animated GIFs, which can be a fun (and oh so modern) way to react to things. Gboard arranges its collection of animated GIFs by topic, like High Five, Shrug, Mic Drop, Cheers, and Thank You, or you can search GIFs to find the one you
like. Gboard won’t display GIFs that are NSFW, so you don’t have to worry about being surprised by what pops up. 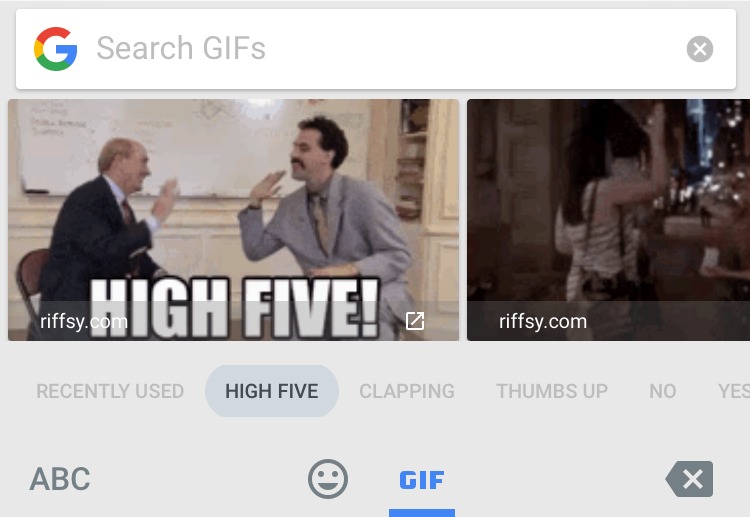 Gboard’s main attraction is its built-in Google search. Tap the colorful Google button to bring up a Google search box, as well as your last three searches. Enter your search terms, and just like a standard Google search, suggested searches appear, and any typos are automatically corrected. Search results appear as cards near the bottom of the screen, which you can swipe through. Tap a card to insert that URL into a text field. Each card displays the domain from which it comes in the lower left, and you can tap an icon in the bottom right to
open the card’s URL in Safari.

What can Gboard search for? Most standard searches work. For instance, searching for TidBITS brings up our Web site as one of the first results. You can of course look for restaurants, like “rodizio nashville,” which finds my favorite Brazilian steakhouse. Location listings include buttons to call the place and get Google Maps directions. Gboard’s search also finds top news articles and YouTube videos. Gboard can even do site-specific searches, like “site:tidbits.com preview.” 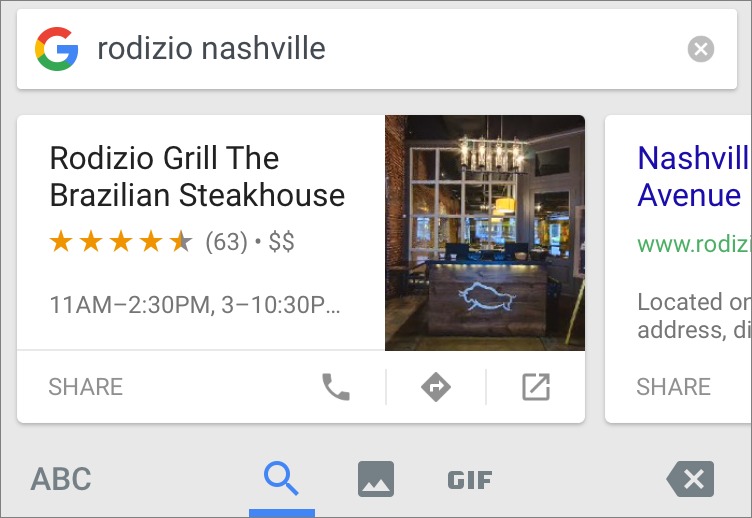 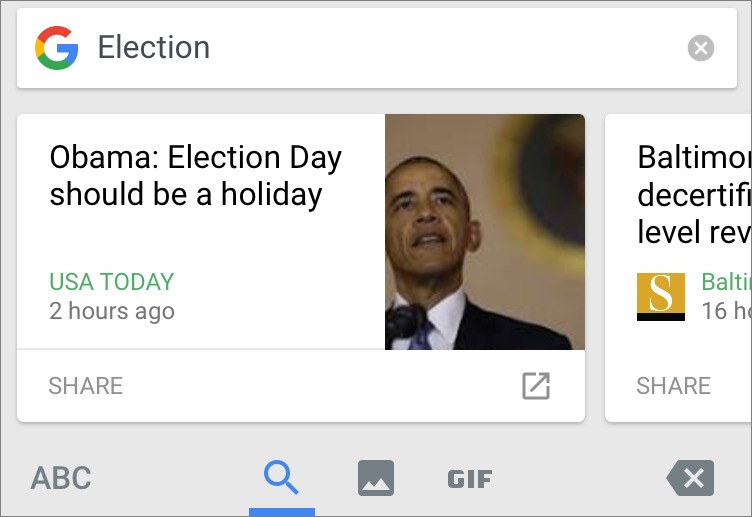 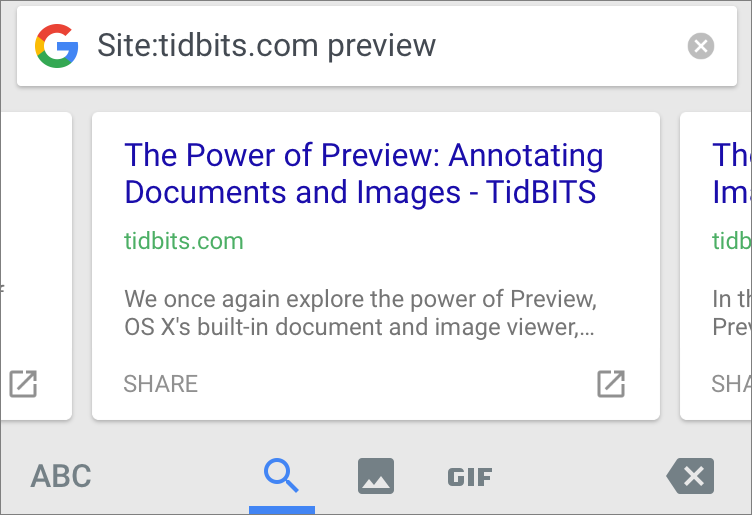 If you let Gboard access your location when it asks, it gives you better local results and can give you weather
forecasts if you search for “weather.” One nice touch: when you insert the weather into a text field, Google adds the relevant emoji. It’s a little bit of whimsy, a tiny detail that we usually expect more from Apple than Google.

After searching in Gboard, three tabs appear at the bottom of the screen for different types of searches:

How many search results you’ll get is unpredictable, but the most I saw was 15. That’s not unreasonable in such a constrained space, but you may need to add search terms to find what you want. Both the image and GIF search results are filtered to remove NSFW images, but the standard searches aren’t.

These are all great, time-saving features, but what I like most about Gboard is that, unlike other iOS keyboards I’ve tried, I don’t have to give up basic competence to get those extra features. However, it’s not yet perfect; apart from the lack of dictation and the wispy font, the occasional crash dumps me back to the system keyboard.

You’re probably thinking, “What about privacy? Is Google spying on everyone who uses Gboard?” It’s not as bad as you might think. Like almost all iOS keyboards, you have to grant Gboard “full access” in Settings > General > Keyboards > Gboard, but it doesn’t require a Google login, so Gboard doesn’t associate anything with your Google account. On its App Store page, Google is transparent about the information it collects: your search queries and anonymous statistics, but nothing else.

I’ve spent the past few years trying to make myself less reliant on Google: I use DuckDuckGo for search (but often fall back to Google), FastMail for email, and iCloud for contact and calendar sync. That said, I’m so impressed with Gboard that I’ve disabled all other keyboards on my iPhone, including Apple’s default keyboard. I may regret that later, but I more or less trust Google, and I feel that the convenience of Gboard is worth the small privacy tradeoff.

Gboard is also available on the iPad, and it works pretty well on my iPad Air, although it lacks the split keyboard feature. However, it’s reportedly terrible on the 12.9-inch iPad Pro, so be aware of that. Google’s Rajan Patel has admitted on Twitter that the iPad version isn’t up to snuff yet, but they’re working on it. Right now, Gboard is available only in English in the United States, with more languages and countries to come. Even more oddly, it’s currently available only for iOS, not Google’s Android.

Gboard is one of Google’s most exciting products in a while, embedding Google Search at the lowest accessible level of iOS and providing an excellent keyboard at the same time. More so than any other iOS keyboard I’ve seen, it fulfills the promise of third-party keyboards, which usually hamper their single great idea with an otherwise thoroughly mediocre keyboarding experience.

Comments About With Gboard, Google Unveils a Great iPhone Keyboard