I used to be a small-phone guy, insistent that I would never wield a “phablet” – an awful-sounding term for what I then thought was an equally dreadful form factor. Who would want a phone you can’t use with one hand?

But when Apple released the iPhone 6 Plus two years ago (see “Apple Announces iPhone 6 and iPhone 6 Plus with Larger Screens,” 9 September 2014), I had a change of heart. I was seduced by the 5.5-inch iPhone with its gorgeous and ginormous screen perfectly suited for reading books, watching videos, and editing photos in a non-claustrophobic fashion.

I got rid of my 4-inch iPhone 5s and all my accessories tailored to that form factor and consigned this petite product category to tech history.

Now, to my mild consternation, it’s back.

Two months ago, Apple introduced the iPhone SE (see “Apple’s March Event Reflects Increased Customer Responsiveness,” 21 March 2016), a model that is externally all but identical to the iPhone 5 and 5s, but has internal components like the A9 processor that are more akin to the iPhone 6s and 6s Plus. It’s a modern iPhone with a classic look, and one that happens to be compatible with all those iPhone 5s accessories I now regret discarding. 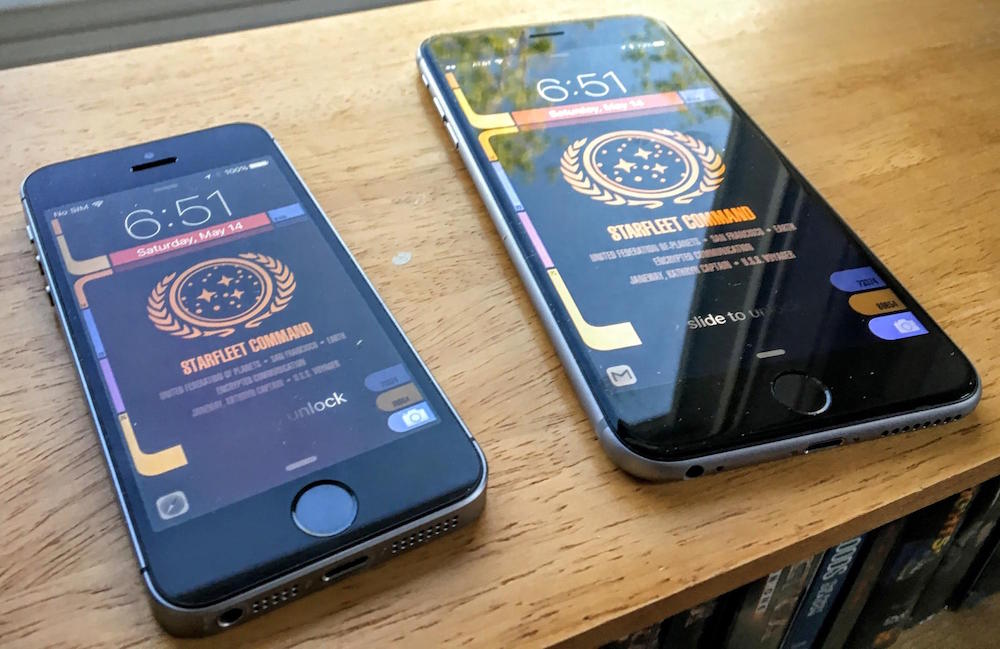 To my surprise, I liked the iPhone SE. Slipping it into the front pocket of my jeans, I felt relieved that I didn’t have to struggle to shoehorn a massive iPhone 6s Plus into that tight space. For all my love of the iPhone 6s Plus’s expansive screen, a burden had been lifted.

Apple CEO Tim Cook said earlier this year that about 60 percent of iPhone users who had purchased models predating the iPhone 6 had not upgraded to a large-screen flavor. What’s more, Apple said it sold 30 million 4-inch iPhone models in 2015 alone, a sign of enduring demand for smaller iPhone versions.

Apple hasn’t yet revealed how well the iPhone SE is selling, but I’m betting it’s doing better than the iPhone 5c did. That 2013 model, positioned as “unapologetically plastic” with a nonstandard form factor and outdated internals, is now regarded as something of a blunder.

With the iPhone SE, Apple appears to have learned from its errors. Those investing in a small-size iPhone are no longer forced to make profound sacrifices in gadget construction, features, and horsepower. Though the iPhone SE is not 100 percent equivalent to the iPhone 6s and 6s Plus, it’s close. While carrying an iPhone SE review unit around for two months, I seldom felt I was making significant compromises.

As an avid iPhone photographer, I produced photos that are indistinguishable in quality from those I’ve shot with my iPhone 6s Plus. Features like Live Photos, 4K capture, slo-mo, time-lapse video with stabilization, and Retina Flash are all on board. What’s more, the smaller iPhone SE is a more manageable chassis for its glorious 12-megapixel sensor.

I adore the classic design with its chamfered edges, now matte instead of shiny. Those flat sides allow the gadget to be balanced vertically on a table, and the small size and shape lends the iPhone SE to single-handed use. 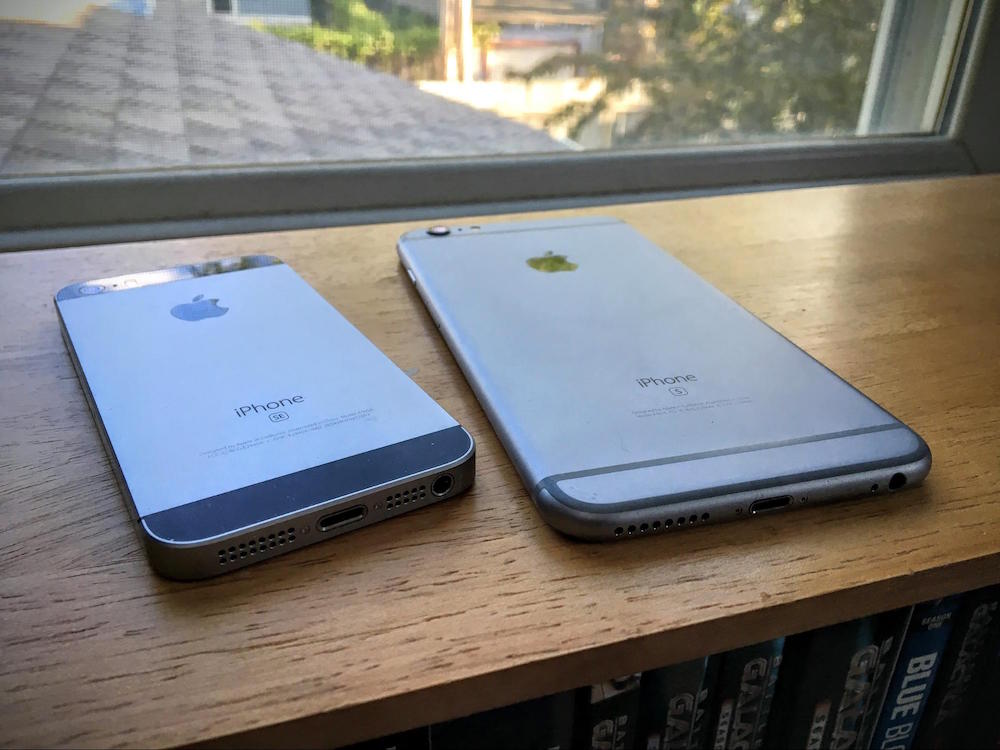 Just a Few Sacrifices — Apple has a long history of staggering its devices’ feature sets to save some good stuff for top tiers while mildly short-changing those in the lesser echelons.

The iPhone SE is no exception. This is a top-flight iPhone, to be sure, though it does lack some features. But how much will you miss these features?

Taking stock of all these omissions, I am hard-pressed to identify one so significant as to decisively negate the allure of a small iPhone. Of course, everyone has different needs. But, on balance, I think Apple has done a good job of producing a smaller iPhone that is competitive with its larger siblings and therefore appealing to a wide range of possible purchasers. In other words, the iPhone SE is a winner.

My Big, Final Decision — After several weeks of iPhone SE use, it was time to return to my iPhone 6S Plus. Would I be dismayed? Relieved?

A little of both, as it turned out.

I missed being able to move about easily with a phone in my front jeans pocket, something that’s difficult to do with the iPhone 6s Plus – especially for me, a pint-sized Puerto Rican, with jeans whose pockets aren’t much deeper than those in women’s jeans. But I easily reverted to my old habit of slipping the iPhone 6s Plus into my back pocket, a position that has worked fine for the last two years.

It’s impossible to have the iPhone 6s Plus in my front pocket while I’m sitting down, something that isn’t a problem with the iPhone SE, but this for me is a hypothetical scenario. Typically, my phone comes out as my butt goes down.

I also mildly missed using the iPhone SE one-handed with thumb gestures, but I’m highly adaptable and don’t mind using a larger smartphone as I would an iPad – holding it with my left hand while jabbing at it with my right index finger. At least in my case, scenarios requiring one-hand phone use rarely come up.

While adapting to the iPhone SE’s smaller screen during my test run didn’t cause me all that much pain, returning to the iPhone 6s Plus’s big screen was a relief in some ways. Display real estate matters for a whole bunch of reasons.

I sometimes use my iPhone to work, at times paired with a wireless keyboard (see “Physical Keyboards for the iPhone 6 Plus,” 25 Oct 2014). While I don’t do this as often as I would on an iPad, it happens frequently enough that a cramped display can sap my productivity.

A smaller screen also is a hindrance in photo work. A bigger viewfinder is always better, and the size of the display becomes even more important when triaging and editing photos. I do more photo processing on mobile devices than I do on a desktop Mac, so the iPhone SE’s tiny display doesn’t cut it for me.

During moments of relaxation, a larger screen is welcome for reading ebooks and watching videos. Though this is doable on the iPhone SE, I found it too cramped to be truly enjoyable.

Prospective iPhone SE buyers have to ask a few hard questions before plunking down their money.

If scoring a smaller and lighter smartphone is of paramount concern, the iPhone SE might be the right way to go, despite its omissions. While not the equal of its siblings in every way, it’s a darn good iPhone.

But people who spend a lot of time on an iPhone, whether for work or pleasure, may want to think about whether the iPhone SE’s smaller screen would be too limiting. For those who regard their handsets as productivity or entertainment hubs, a larger screen may be necessary to avoid eyestrain or digital claustrophobia.

I’ve concluded that I’m definitely in the latter camp, with an affinity for a large display to ease a range of hardcore activities.

But for those who prefer a powerful iPhone that fits better in a pocket or in one hand, the iPhone SE is perfect, and I’m betting it will prove a popular option.

Comments About The iPhone SE: A Modern iPhone in a Classic Case